Earlier this year, United Airlines accidentally revealed that Apple is its biggest customer in San Francisco, spending $150 million on airline tickets each year and purchasing an average of 50 business class seats on flights to Shanghai on a daily basis.

Think about this: an average of 50 business class seats on flights to Shanghai on a daily basis.

Google: If you enter the United States on a visa waiver, your maximum stay will be 90 days. With a B-2 tourist visa, by contrast, you will normally be allowed to stay for up to six months. What's more, with a B-2 visa, you can apply to extend your stay even longer.


UA operates two direct flights daily from SFO-PVG using the B777 aircraft. Each has 48 business class Polaris seats and roundtrip airfare is about $8K-$10K depending on the day and morning or evening flight.

Out of 96 Polaris seats available, AAPL is filling up over half each day.

If AAPL is buying 50 round-trip tickets every day or 18,250 round-trips every year, which contributes $150 million revenue annually to UA, then AAPL is paying about $8220 per ticket.

Federally Compliant State Driver's Licenses: I remember all that angst about folks who lived in states whose state driver's licenses failed to comply with federally mandated criteria to be used for flying on commercial aircraft. States have picked up the pace. Only three states are not yet compliant, and they have all been given waivers: Oklahoma, Oregon, and New Jersey. The deadline is October 1, 2020, and it's unlikely the US will extend current waivers for the three states. Oregon, for example, says their "RealID" will be available beginning July 1, 2020.

World Series, from a google search:


Houston can find some comfort in the history books too, as 10 of the 13 teams to come back from 0-2 in the postseason did so in the World Series. The New York Yankees were the last team to manage that, when they erased a two-game deficit to beat the Braves 4-2 in 1996 after losing their first two games at home. 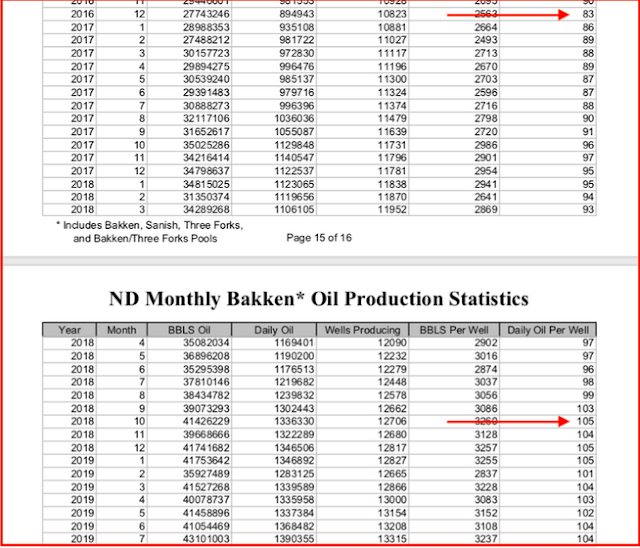 I thought that was about as good as it was going to get, but now we have another month of data:

Tag: oil/well/day.
Posted by Bruce Oksol at 6:40 PM No comments:

Producing wells in the diagram above:
33636, first months of production:

XTO Has A Monster Well In Bear Den With Recent Jump In Production -- October 26, 2019

Posted by Bruce Oksol at 4:49 PM No comments:

Well in the drilling unit and immediate area: 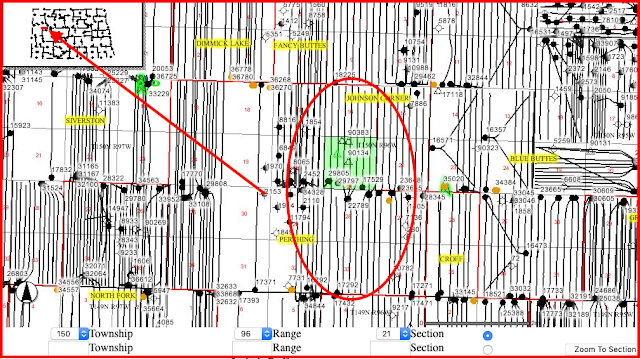 I'm here .... but relaxing. Serious blogging will begin a bit later today. In fact, and I will put this in bold: there is nothing of interest in this post for anyone other than me. It's for the archives, for the granddaughters, to look back on this twenty years from now to see what I was doing.

This should put folks in a good mood: the week in pictures, over at Powerline.

A reader had this to say about an all-electric Mustang:


Sacrilege. Electric muscle cars are the ultimate oxymoron. Only way to get that throaty rumble in an electric is record it and play it through the sound system. Just ain't right.

Agree completely. But you know, I'll bet they will be incredibly fun to drive. Golf carts that can go 100 mph. But, wow, look at the price. Of course that cost is offset by "absolutely" no maintenance costs, or inconvenience of oil changes. 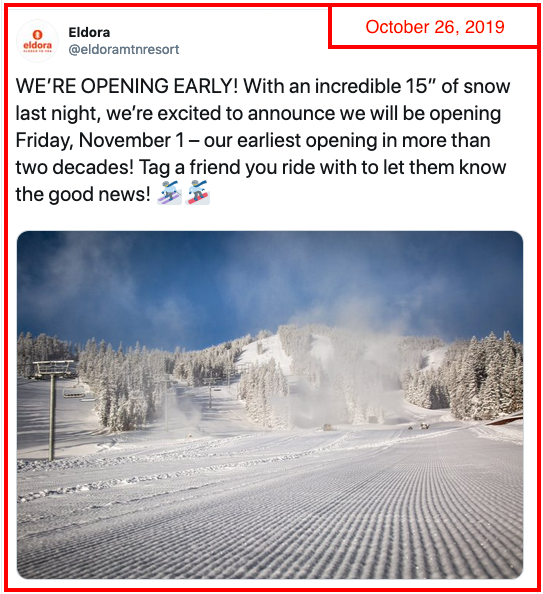 New cooking hobby: slow cooking. Beef and/or pork. After several "experiments" with the classic "Crock Pot," I moved up to a larger "Black and Decker" slow cooker. Results were not as good. I'm going back to the smaller classic "Crock Pot." If I need to feed more than a few, I will use two or three Crock Pots. In addition to getting better results, I can slow cook different meats, vegetables, seasonings. Our granddaughters love the roast beef and pork, but our older daughter -- their mom -- is a vegetarian. She loves the "Crock Pot" vegetables -- so now with two Crock Pots, one with meat, one without. I have will have to talk to my Indian neighbors about vegetarian cooking. No curry, though. I love the preparation, slicing all the carrots, green beans, onions, potatoes. I love to do the seasoning. I simply ask "Alexa" to play Floyd Cramer. Incredibly relaxing.

Once that's all done, a quick batch of pancakes or Mickey Mouse waffles for Sophia and I'm ready for the day. And while all that's going on, I prepare "mac and cheese" -- all of this is refrigerated (pancakes/waffles can be frozen) and when Sophia comes home, she orders "off the menu." LOL.

I would love to do "learn" sushi, but it would simply be too expensive / poor use of time. With sushi, the restaurant experience is much, much better.

I asked Sophia if she wanted to go to the store with me. Of course she said yes. I put her on my shoulders and we walked to the grocery store just down the street. Windy, drizzling, but but it was a nice walk. She kept the rain off me. LOL.

I've talked about this before. Amazon Prime is absolutely incredible. I mentioned above that we walked to the store to get the battery but I could have gotten a much better deal ordering through Amazon, and with one-day delivery we would have had it by today, instead of last night. Actually, I forgot, I believe in our area they have same day delivery but the delivery charge is a tad high when just ordering batteries or printer ink.

I see USP, USPS, FedEx, and Amazon delivery vans in our apartment complex throughout the day, as early as 9:00 a.m. and as late as 10:00 p.m. It's absolutely insane. Drones would make a lot more sense, especially when delivering batteries or printer ink.

There are six fewer shopping days between Thanksgiving and Christmas this year compared to last year. Retailers have to make up that six-day difference in sales. If you are wondering why we are now seeing "holiday sales," especially on the internet -- Walmart, et al -- that's why.

Human nature is such that a lot of "stuff" ordered for Christmas before Thanksgiving will be opened well before Christmas, and folks will then go out and buy more "stuff" for Christmas. All over again.

It's a beautiful day in north Texas. Sophia is learning meteorology. She really understands sunny, partly sunny, partly cloudy, cloudy, overcast. Yesterday she pointed in one direction and said it was cloudy and off in the distance, in another direction it was overcast. The word she will learn today is "brisk." We had two days of rain and wind, and now it''s slightly breezy and "brisk." A beautiful day.

I enjoyed -- somewhat vicariously -- the Diwali festival in our apartment complex. It's a four-to-five day celebration but for some reason a google search says "Sunday, October 27, Diwali 2019, date may vary."  We've lived in public housing (military bases), rental homes, and/or apartments our entire lives except for two periods when we had our own house.

First house: 1977 - 1980, Vacaville, CA. In 1980, the USAF transferred us to Grand Forks, ND, and we never returned to California to live. We kept the house and rented it for, maybe fifteen years or so. Every year the real estate company taking care of the house raised the rent by a few percent. We never told the real estate agent, but we always sent the renter the difference back to them. If the rent was $800 and was raised to $850, we sent the renter $50 every month. We kept the first renter for ten years. The second renter was a young Hispanic couple, we were told. After two or three years in the house, they asked if they could buy the house. They gave us an offer; we rounded it down and told them they had a deal.

Second house: we were transferred from Turkey to Montgomery, AL. We were informed that the public schools in that part of town were unsuitable for our daughters. Our choice: either send them to a private school -- think F. Scott Fitzgerald and Zelda -- or buy a house in a neighborhood with better schools. We did the latter. We were there for two years and then transferred again, this time to Virginia. We rented the house for a number of years and when the economy finally improved a bit, we sold that house.

We've lived in other houses, but they were all rentals. But it's mostly been public housing or apartments. I enjoyed owning our homes, but in the big scheme of things, I prefer apartment living and, now, I can't imagine ever living in my own home again.

I absolutely love the social setting one finds in an apartment setting. I thought about that this Diwali.

Enough of this. Maybe more later.