The First Skarston Well With Huge Jump In Production; Not Re-Fracked -- December 19, 2018

Later, 8:59 p.m. CT: see first comment. Don't forget, the Whitman 3-34H was originally drilled short due to pressure issues, and wasn't stimulated to begin with. Fascinating stories. Absolutely fascinating. I am absolutely amazed how good these roughnecks/geologists are -- how they prevented a blowout -- had there been an aggressive driller or an aggressive project manager .... the story could have been much different. And not necessarily a good story.

The CLR Whitman wells in Oakdale were early wells in the Bakken and very, very good wells. They have been posted numerous times. They are tracked here (to some extent). It's interesting to read about #20210 at that link.

The Whitman wells always intrigued me. When they were first drilled, CLR mentioned them often. Of the two wells running south, one was huge, producing 1 million bbls; whereas the other one was lousy (open-hole frack/unfracked). I was always curious when CLR would go back and re-frack the that well (#20212). Well, now they have and the results are amazing (and consistent with what one expected of the Whiman wells).

For newbies: Bakken wells will produce for 35 years. During that time they will have work over rigs; undergo mini-refracks; major refracks; and, impacted by fracking of neighboring wells.

Here's another example (but be sure to read the linked post first to bring yourself up to speed regarding "20210").

The well:
Recent production; FracFocus has no data to suggest this well was re-fracked --

However, it's neighbor well was re-fracked. The well:
Recent production, re-fracked: 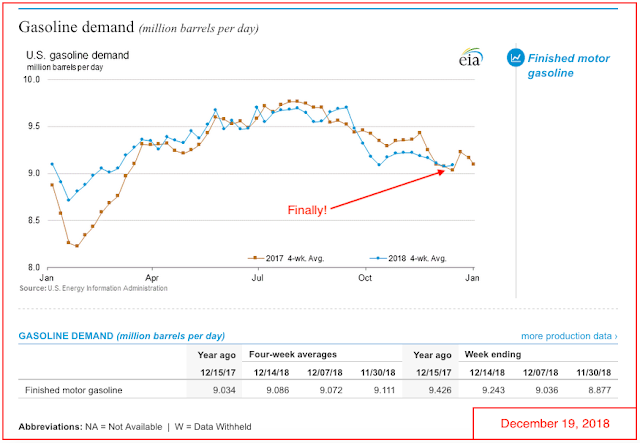 Europe: Over at the sidebar, a link to "the big stories." From there, "Europe at a tipping point." Were the "yellow vests" the beginning of the end?

New England: Massachusetts lifts moratorium on National Grid gas hookups: The move could boost projects that have been stalled for months, but regulators are imposing some restrictions on the utility. Don't expect the floodgates to open anytime soon.

Facebook: What’s Facebook worth to you? About a thousand bucks, according to a new study from scholars at Tufts University and three other schools that asked people how much it would cost to get them to quit the social media network.
Posted by Bruce Oksol at 4:48 PM No comments:

But as soon as it hit one million bbls it was abandoned. 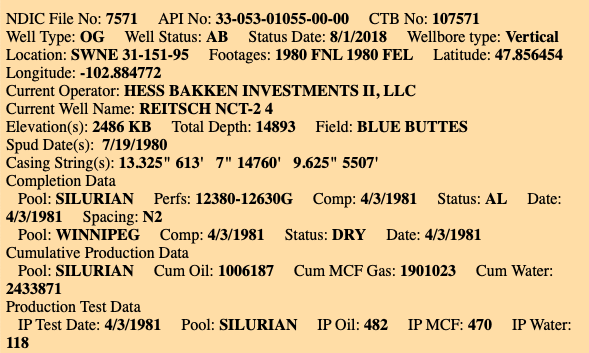 This page won't be updated. See this note for background. This is what makes unconventional drilling / shale oil / tight oil so exciting.

As I've mentioned many times before, over the course of a Bakken well's lifetime -- 35 years -- the well will see work-over rigs; will undergo mini-re-fracks; and, major re-fracks. Existing wells will be impacted by neighboring wells. The wells will not follow a simple/conventional "depletion" rate curve.

Here's another example.
I followed this well for quite awhile some time and then removed it from the list of wells that needed to be followed.

The well:
I quit following this well back in 2014 after the successful frack. Since then, it has been an outstanding well, with the typical Bakken decline.

Now I see that this well is back off line. Full production profile here.

There is a lot of activity in this area, as one can see in the graphic below. 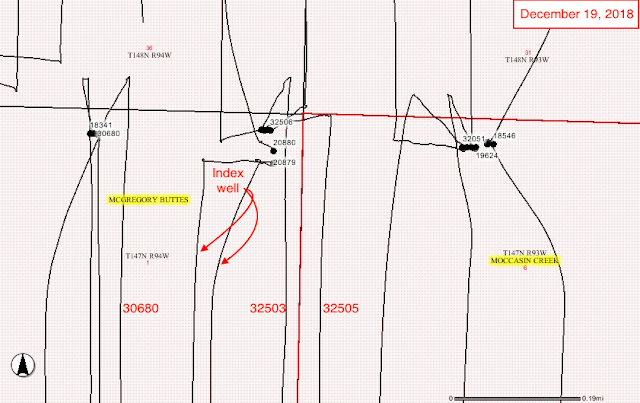 Other wells of interest in the graphic: 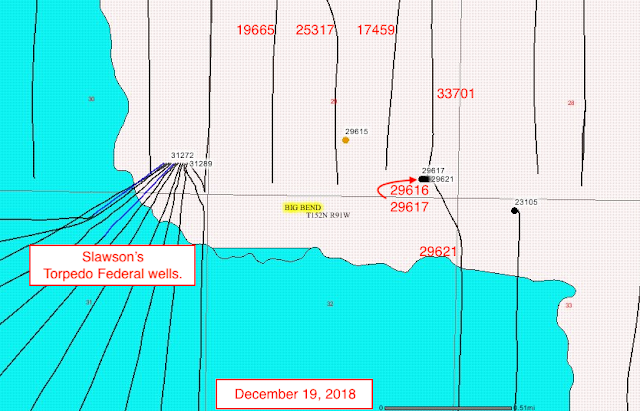 Later, 8:52 p.m. Central Time: see first comment -- from a most knowledgeable reader on this subject -- I had "blown" this off -- not given it much thought (for various reasons) but the reader puts it in perspective and notes it is more important than I realized. From the reader:


The 4.237 million barrel drop in distillates inventories is worth mentioning, especially in light of low coal & gas supplies The drop in distillates was primarily driven by a 417,000 barrels per day increase to 4,886,000 barrels per day in product supplied, the 2nd highest on record, topped only by January 31 2003, which I would read as heat oil demand.

That now puts our distillate (heat oil) supplies 11% below the 5 year average going into the gut of winter, & might strain another fuel switching option, should the weather get cold enough to need it.

In other words, as long as we have a warm winter, we might be okay --- but if we have a cold snap, it could get very interesting, very fast.

Slawson Whitmore wells in Parshall oil field recently fracked, #34921 and #34922. Not sure which way they are running, but based on name and fact that another Whitmore well is off line, it suggests the wells are running north; sited in an unusual location if that's accurate; #17303, a Whitmore well to the north, off-line; two EOG Austin wells (#25839, #25840) in the same area are also off line. Also note this incredible Slawson Whitmore well, drilled in 2008, that went off line 7/18:
Remains off line; see this post.
After nice jump in production due to neighboring re-frack, this well is back off line:
Back on line; nice jump in production:
17319: