WhittenLog -- Just For The Fun Of It

Again, a huge "thank you" to Vern Whitten. His address and contact numbers are at most of the links below. Give him a "shout out."

We're having guests over this evening who have never seen the Bakken. This might be the fastest way for them to enjoy what we've enjoyed for years.

Clarification On Recent Discussion Over At The Discussion Group -- July 4, 2015

Over at the Discussion Group board, a reader clarifies a significant point with regard to "leases" and "permits" with regard to a discussion on expiring permits or leases.

A productive well on a drilling unit will hold that lease by production, and subsequent wells in that same drilling unit will have the same conditions as the original lease. However, new wells still require a permit from the NDIC to be drilled. Permits are good for one year.

At least that's my understanding, of what I know and don't know. I don't own any minerals so I can't say for sure if this is correct, nor can I say whether I have articulated it correctly. Do not make any decisions, financial, investment, travel, or otherwise, based on anything you read at this site or think you may have read at this site. If this information is important to you, go to the source.

Remember: another discussion group that tackles these and similar questions is the "Mineral Rights Forum." If one searches the net, one can find many, many sources; many, many opinions.
Posted by Bruce Oksol at 10:46 AM No comments:

The tea leaves continue to swirl. I still bet that US gasoline usage will hit an all-time record this August. If it does, it will be interesting if the mainstream media covers the record. It goes against all conventional "wisdom."

Everyone I talk to is quite surprised to hear that we are nearing an all-time gasoline demand record -- despite all the EVs on the road, and Elon Musk delivering a record number of Teslas this past quarter.

And despite the CAFE standards that have been put in place since Abraham Lincoln ran on the "green energy" ticket. And despite all the subcompacts being bought by millions of Americans on both coasts. And despite all the folks taking advantage of the best public transportation system in the world, the Los Angeles Metro.

What made me think (again) about the gasoline demand record possibly being broken this year was this story in the business section of today's Los Angeles Times:

"Get that phone out of my face," Hickey shouted as he pushed the phone away, sending it crashing to the ground. On the video, Napshin can be heard complaining, "He just hit me. You witnessed it."

The tour bus business on Hollywood Boulevard has become ultra competitive — at times downright hostile. Operators are looking to score big profits from a recent surge in visitors to Los Angeles.

If the surge has already begun, it will only accelerate in August.  I know I'm doing my part, putting a lot of miles on my 2005 Chrysler minivan.

More data points from the article:


The rivalries among tour bus companies have become more heated as tourist numbers have climbed.

By the way, most of these tourists stay in motels and hotels and don't give a hoot about water restrictions and the California drought. Just saying.

High on my list this summer is to visit Carbon Beach in Malibu. I really doubt I will do it; it's such a pain to drive that far north along the ocean this time of year, but I would be doing my part to keep public access to California beaches a reality.


In the decades-long struggle to make the beaches fronting California's well-heeled coastal communities more accessible to the public that owns them, a mile-long stretch of Malibu known as Billionaires' Beach has been the site of a particularly pitched battle.

And on Tuesday, the commission will officially announce the opening of another path about a half-mile from the Geffen property.

Activists call it an important victory in the fight between homeowners seeking privacy and people eager to expand their right to walk, run, lie and play on the sand, which is public property up to the average high-tide line.

The debate over the new Carbon Beach trail dates back more than a decade. Access proponents have long wondered why property owner Lisette Ackerberg, who supported many conservation causes, fought so hard to keep people off the public beach in front of the home she and her husband, the late Norman Ackerberg, built on the coveted stretch of coast.

If I go I will have to go alone. I would have to park several miles from the access point and take a bus or walk. The family unit traveling with me is unlikely to want to walk that far. I could park at one of my favorite "museums," The Getty Villa, and then walk the 5.8 miles to Billionaires' Beach. Three miles/hour -- two hours. Each way. Or better yet, bike it. I have a bike carrier and a bike out here; park the car at the Getty and bike to the beach. Hmmmm.....a great photo op.
Posted by Bruce Oksol at 10:05 AM No comments:

Email ThisBlogThis!Share to TwitterShare to FacebookShare to Pinterest
Labels: CAFE_Standards

I am agnostic apathetic when it comes to wind power. When I first started blogging about wind power I was very, very much against wind power because I felt folks who supported wind power were simply ignorant about the fact that wind power has not one redeeming feature. Now that anyone in positions to decide whether to support wind power should know the non-merits of wind energy, I have become agnostic apathetic on the subject. It's a democracy and if folks want to put up wind towers to feel good, that's fine with me. I don't have a dog in that fight.

A while back I had decided I would not post any more stories on wind energy and if you scroll through the blog you won't find many wind energy posts.

But periodically, it's important to post a story to keep track of the industry, simply out of curiosity.

So, the data points from this article in The Dickinson Press:
This particular wind farm is slightly more expensive than a previously approved ND wind farm. The Antelope Hills Wind Project northwest of Beulah in Mercer County was advertised for the same amount ($240 million, to be exact) for slightly more electricity than what the Tioga project is going to provide (172 MW - Beulah; 150 MW - Tioga).

On a more pleasant note, the reports from the fields are incredible. The Dickinson Press is reporting that global warming has really helped the North Dakota farmers this year. Crops are looking good and two weeks ahead of schedule. A few more years of global warming and ND farmers will be able to put in three crops annually instead of just one or one-and-a-half. From the linked article:

North Dakota has such a wide variety of crops that like different conditions. As an example, canola plants like cool conditions while corn prefers warmer temperatures.

The best part about the article: the photograph. Enjoy.
Posted by Bruce Oksol at 9:43 AM No comments:

Wind Farm Costs In US vs India

July 4, 2015: I have no idea when I posted this story -- I guess it was first written January 31, 2013, based on the date of a linked article -- but I must have put it in draft and forgot all about it. It appears that while spell-checking the blog earlier today, this story was inadvertently posted. I will leave it here, although the data is a couple of years old. Take it for what it's worth: this article and $1.75 will get you a Starbucks in San Pedro, California.


Wind-generated electricity has become more economical to produce in the past 10 years, dropping from as much as 30 cents per kilowatt-hour to 4.5 to 7.5 cents, making it more competitive with other energy sources.

The cost to develop and build a wind energy facility is approximately $1.3 million to $1.7 million per megawatt, compared to a cost for gas-fired energy generation of $800,000 per megawatt.

But I digress. Another source:


The costs for a utility scale wind turbine in 2012 range from about $1.3 million to $2.2 million per MW of nameplate capacity installed. This cost has come down dramatically from what it was just a few years ago.

So, $2 million / megawatt of wind energy seems to be a good 30-second soundbite.

Don noted this today, a story coming from India:


DLF Ltd. said that it has entered into an agreement to sell a part of its wind power business for 2.82 billion rupees ($53 million) to Bharat Light & Power Pvt. Ltd., as part of its plan to raise money by offloading non-core assets.

DLF, India's biggest real estate company by sales, is selling a 150 megawatt wind power project set up in Kutch in the western state of Gujarat.

I assume it has to do with decreased labor costs, lower materiel costs, and the fact that it's a "used" wind farm, not new, probably in need of some deferred maintenance.

But it begs the question of whether the tax credits inflate the value of these wind farms for companies who benefit from the tax credits, perhaps more than from the electricity they sell. But this is well beyond my understanding of the game.

For me, what's important is the 30-second soundbite for the cost of coal-powered facilities and wind turbine farms here in the US.
Posted by Bruce Oksol at 9:25 AM No comments:

Note: this page will not be updated. This well is now tracked here.
February 19, 2017: update:

Update on this well.

This is an important well.
See notes below the production profile.

Note the well is now active.

The original geologist's summary back when the well was first drilled (the following includes direct quotes and paraphrasing, but mostly direct quotes):
Pilot hole core (plans): 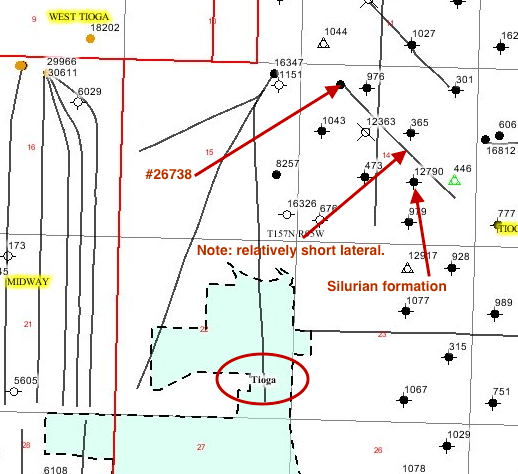 The only other active well in the immediate area:
An interesting well in the area:
Note: in a long note like this, there will be factual and typographical errors. I have no formal training in oil and gas exploration and I may have missed important points and/or misinterpreted data. If this information is important to you, go to the source.
Posted by Bruce Oksol at 12:48 AM No comments: