Amtrak to cut service to Williston to three times weekly. Link here. Due to Wuhan flu, ridership has dropped 90%. Huge financial shortfalls. May be lucky to get back to 50% capacity by 2021. 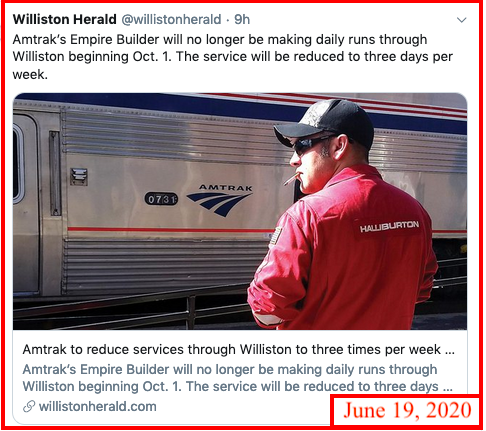 Food: I don't know about the rest of the country, but here in north Texas the grocery stores are more than back to normal.


No shortages of anything.

Yes, on any given day, I might not find something I'm specifically looking for but in general, there are no shortages.

I was reminded of that looking through an old issue -- June 11, 2020 -- of The New York Review of Books. A UC-Berkeley professor has a lead article telling us about the shortages in the American food supply due to Covid-19. The title of the essay: "The Rot in our Food Supply." Wow, talk about a story that had no legs. Yes, there was a "relative" meat shortage early on but from what I can tell, there's more than enough escargot, fish, chicken, eggs, lamb, pork, and beef. After getting the gist of the article in the first three paragraphs, and realizing Mike must be living on a planet different than the one I am living on, I skimmed the rest of the article, and was unable to find any recommendations on how to make things better.

Comment: the only "good" thing about this essay was to remind me how incredibly wonderful a free market really is.

India: only one other essay worth writing about in the same issue -- "The Pillage of India," by Christopher de Bellaigue.


The author reviews two books, including one I recently bought through Amazon and am slowly working my way through: The Anarchy: The East India Company, Corporate Violence, and the Pillage of an Empire. I bought the book simply to learn more about the history of India since so many of my neighbors are first and/or second generation Indians. I haven't read that essay yet; in fact I did not even notice the essay until I was getting ready to use the magazine pages for tinder for my Weber grill chimney. The current issue of The New York Review of Books arrived yesterday and critical mass in my little hovel will be reached if I have more than one issue of The New York Review of Books.

Breaking news: PGA player tests positive. OMG. Just when they were getting back to live play. I'm not sure if we will get through this weekend; the question is whether they will stop the tournament currently under play.

Food. Back to food. I have never grilled so much as I have grilled in the past few weeks. There are many reasons for that, but suffice it to say:
From the current issue of The New York Review of Books, the following:

Police brutality, Chicago, 1972 - 1991: "A Legacy of Torture in Chicago," Peter C. Baker, a freelance writer in Evanson, IL. It should be a very interesting read; I'm always interested in learning more geography:
"Mexico's Ruinous Messiah," Enrique Krauze, writer and recognized authority on Mexico. The writer adds AMLO to his list of despots, to include Turkey's Erdogan and Venezuela's Maduro. Who would have guessed. Should be a fascinating essay. I'm surprised to see it in TNYROB, and I'm surprised the editors accepted it, agreed to print it despite naming Maduro in the list of tyrants.

The scientific method, an essay by Jessica Riskin, teaches history at Stanford.

So, lots to read.

In addition, I am reading a chapter a night of White Mischief, James Fox.

It has come down in price since I last checked about a week ago:

Note: I post a  lot of new notes every day; I update many older notes every day. I often make content and typographical errors. I try to post links "everywhere" to make it easier to fact check -- at least fact-check the source from which I got the item.

Note: I am inappropriately exuberant about the "Bakken."

Note: I often intersperse factual content with personal comments and opinions. It is difficult to tell what might be my opinion -- see one of the notes above.

Note: except for my inappropriate exuberance about the "Bakken," I don't have any hidden agenda with regard to the Bakken. With non-Bakken items, I very likely have agendas which may or may not appear obvious.

I track 3rd generation monster wells at this site.

One of my favorite posts this past week: Saudi Arabia's plan to flood the US with oil was highly successful. A contributor to oilprice agreed:

And things are not much different for its Gulf neighbors.

What makes this so "cool," and interesting is the fact that back on June 12, 2020, I did my own calculations based on public data provided by Saudi Arabia and others, and came up with these figures:

Revised budget and revenue projections in early 2020 moved their target to $84-oil.

I wonder if Art Berman pays attention to these numbers. But I digress. CLR is happy enough with these numbers to resume production.
Posted by Bruce Oksol at 9:24 AM No comments:

AAPL: pre-market trading, AAPL just hit its all-time intra-day record high of $355.40 before falling back to $355.30. Gonna be an interesting day. This is Friday, isn't it, going into a weekend? 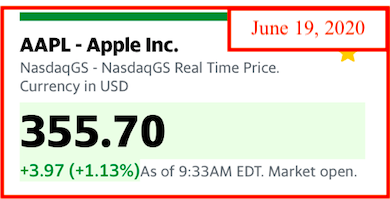 After Being Off Line For Almost A Year, A Zavanna Usher Well Comes Back Strong -- June 19, 2020

The well:
The Zavanna Usher / Stranger wells are tracked here.

First things first:
Continental Resources (CLR): will resume production in July, 2020; will maintain 50% curtailment, link here at SeekingAlpha;
Fast and furious: oilprice.com stories that deserve a second look; comments later, perhaps:
Other stories we may come back to later:


Enbridge’s proposal to have crude oil shippers on its now fully uncommitted Mainline sign long-term contracts for as much as 90% of the 2.9-MMb/d pipeline network’s capacity is a big deal — and controversial. Refiners and integrated producer/refiners generally support the plan, which is now up for consideration by the Canada Energy Regulator, while Western Canadian producers with no refining operations of their own — and, for many, no history of shipping on the Mainline — mostly oppose it.

It’s complicated, of course, but what it really comes down to is that everyone wants to avoid what they see as a bad outcome. Refiners and “integrateds” fear that if the current month-to-month approach to pipeline space allocation remains in place, cost-of-service-based tariffs on Mainline will soar when new takeaway capacity is built on the Trans Mountain and Keystone systems and fewer barrels flow on Mainline. Producers, in turn, are wary of making multi-year, take-or-pay commitments to Enbridge if they’ll soon have other takeaway options, and are equally concerned that they’d be left in the lurch if they don’t commit to Mainline and the Trans Mountain Expansion and Keystone XL projects don’t get built. Today, we consider both sides of this important debate.

I have no idea what the oil and gas rig count is but I understand it's down a bit year-over-year.

But that doesn't seem to affect the natural gas fill rate.  Again, this should not be taken out of context. 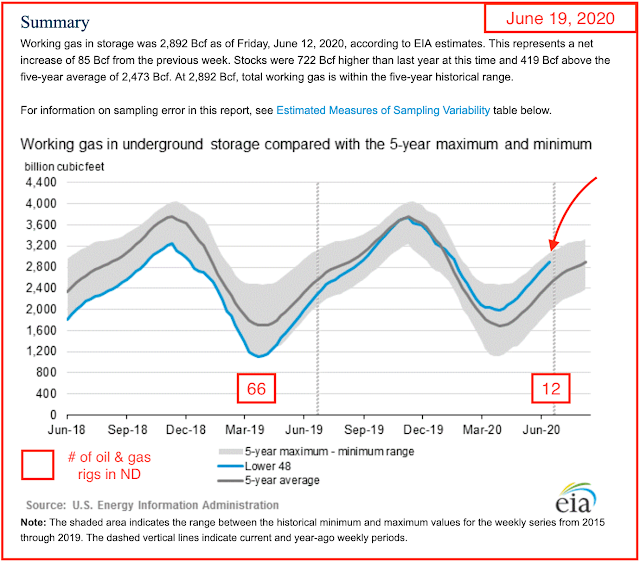