Results In The Eagle Ford Core May Place A Ceiling On Oil Prices, But USO Could Still Head Higher -- Filloon

Summary:
I'm not sure who writes these headlines, but something tells me the "Eagle Ford" won't put a ceiling on global oil prices. LOL. Maybe I'm misreading / misunderstanding something.

Are We Looking At Eleven More DUCs This Week? Coming Off Confidential List This Week -- July 30, 2017

Posted by Bruce Oksol at 7:43 PM No comments:

I don't recall if I've previously posted this. From US News: applying new fracking techniques to older wells in the Bakken works. Data points:
The link to The Bismarck Tribune article is here.

Even with YouTube, not many live versions with Patsy Cline:


I Fall To Pieces, Patsy Cline

Posted by Bruce Oksol at 3:40 PM No comments:

Annual US Residential Electricity Dropping; The EIA Suggests It Was Partly Due To The Bakken Bust -- July 30, 2017

Later, 8:32 p.m. Central Time: see first comment. Click on these links to see some striking graphics which might explain the decrease in electricity usage during the Obama presidency. The most striking is the "median income" graph:

Later, 5:58 p.m. Central Time: I posted this graph earlier, but when I went back and re-looked at it, something jumped out at me.

This had nothing to do with the EIA explanation: a) weather; b) LED lights and energy-saving devices; and, c) the Bakken.

It is a well-known fact that the recovery from the Great Recession was the worse recovery on record. The flattening (and actual decrease) of residential electricity sales corresponds exactly to the years Barack Obama was president.

Something else was going on. That line labeled "Pre-Obama" is absolutely incredible when you think about it. There aren't many economic data curves that climb that fast, and then look how fast the "curve" changed. It didn't just slow down; it came to a complete stop, reversed direction (from upward to downward), went down a bit more and then flattened out/descended throughout the rest of his presidency. Darndest thing I've ever seen. 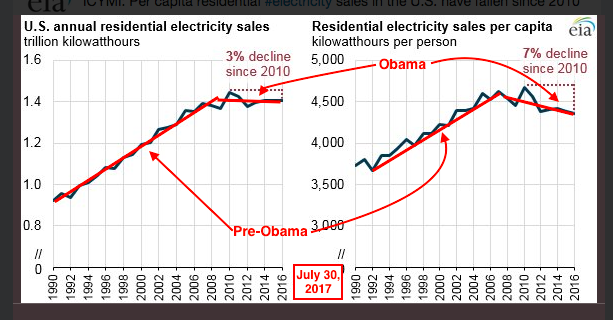 Original Post
It will be interesting to see the analysis, explaining the drop in electricity consumption / capita. One wonders if (I'm writing this before going to the source): 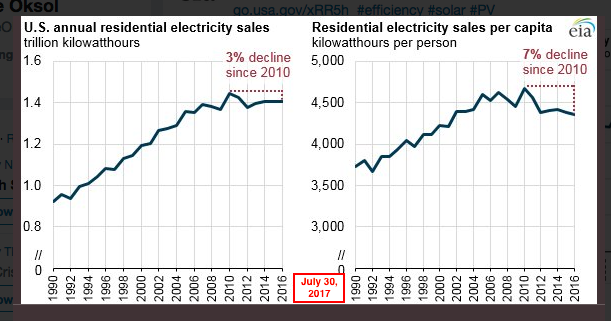 EIA provides this analysis:
I found it interesting that one state was highlighted in this report:


Other factors, such as income growth, have affected retail electricity sales, especially in states such as North Dakota. North Dakota experienced significant economic growth as crude oil production from the Bakken region increased from 2008 to 2015.

If there is "truth" in the North Dakota piece, it speaks volumes about how huge the Bakken really was. And note: they are hiring electricians in North Dakota again.
Posted by Bruce Oksol at 1:37 PM No comments:

Email ThisBlogThis!Share to TwitterShare to FacebookShare to Pinterest
Labels: Electricity_Sales

Has Saudi Arabia stopped the bleeding? 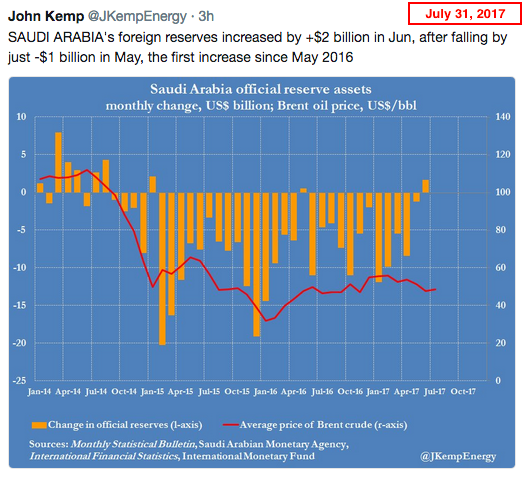 
John Kemp's headline over at Twitter: SAUDI CRUDE OIL EXPORTS have been running well below 2016 level since start of year and kingdom has pledged < 6.6 million b/d in August.

What is not said in that headline is that Saudi had record production in 2016. From late 2014 to late 2016 Saudi tried to break US shale by opening the spigots; their production actually never dropped until early 2017. So, saying their exports were well below 2016 may not be saying a whole lot. Then, in the graph, they compare current exports to the 10-year average, which, of course, is greatly affected by the surge in production/exports from 2014 to 2016. If one eliminated 2014 - 2016 data, the 10-year line would be (much?) lower and Saudi exports would still be greater than the 10-year average. Lies, damned lies, and statistics.

The real problem, however, is not Saudi. In the big scheme of things they probably are trying to right the ship. The problem is the other OPEC countries, notably Iraq and Iran. 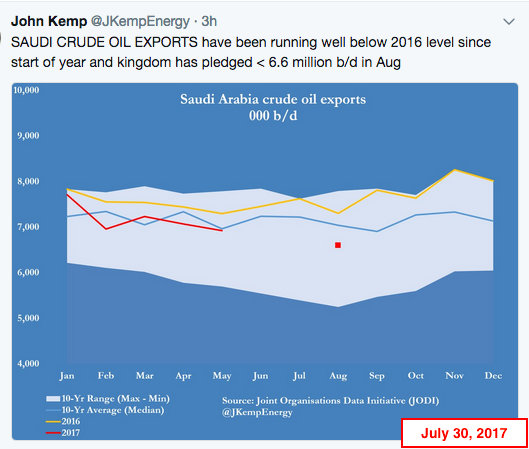 As long ago as November 11, 2015, I said that low oil prices were an existential issue for Saudi Arabia and I've said it since on numerous occasions.

I see that others are reading the blog. LOL.


You wait decades for an existential crisis, then two come along at once. At least that's how it must feel for OPEC's beleaguered ministers. In the short term the market for their oil is being eroded by rising production outside their control. Looking further ahead, oil demand itself is under threat from the electrification of road transport. OPEC may not yet be dead, but its days are surely numbered.

The most obvious short-term threat to the group comes from the rapid rise in U.S. shale oil, but the risks have expanded to include other areas like Brazil's prolific sub-salt discoveries and more recent finds further north along the east coast of South America.

The writer says "OPEC's days are numbered." For me, OPEC = Saudi Arabia. In math, if A=B and B=C, then A=C. Just saying.

Some data points from the article:
Then a lot of political correctness talk about EVs. Trivial.
Posted by Bruce Oksol at 12:52 PM No comments:

Link here.
Posted by Bruce Oksol at 10:49 AM No comments:

Over at "The Big Stories" I follow the "Mideast on the Brink." I have moved that link back to the sidebar at the right, under "The Top Five." Apparently Saudi Arabia says there has been "a declaration of war in the Mideast."

From Reuters: Saudi Arabia says calls for internationalization of holy sites is a "declaration of war." The rhetoric between Saudi Arabia and Qatar increases.


Saudi Arabia's foreign minister called Qatar's demands for an internationalization of the Muslim hajj pilgrimage a declaration of war against the kingdom, Saudi-owned Al Arabiya television said on Sunday, although it was unclear whether Qatar had actually made any such demand.

"Qatar's demands to internationalize the holy sites is aggressive and a declaration of war against the kingdom," Adel al-Jubeir was quoted saying on Al Arabiya's website.
"We reserve the right to respond to anyone who is working on the internationalization of the holy sites," he said.

However, it was unclear whether Qatar made the demand. It did accuse the Saudis of politicizing Hajj and addressed the United Nations Special Rapporteur on freedom of religion on Saturday, expressing concern about obstacles facing Qataris who want to attend hajj this year.


Lost In Translation
Posted by Bruce Oksol at 10:48 AM No comments:

Some time ago (last February), I said I might eventually get back to #22621. I returned to it in April but that was before the NDIC map showed the horizontals; those horizontals are now shown on the NDIC map. An update regarding the Whiting Chameleon well is posted here, a classic pincer movement, or a fracking squeeze.
Posted by Bruce Oksol at 10:35 AM No comments:

The well:
The production profile for #21600 can be found at this post with additional information.

For the archives: this really doesn't tell us anything new, I don't think ... I could be wrong. But it was posted just the other day by the EIA so for the archives: US crude oil production forecast expected to reach record high in 2018.

In 2017, this year, total US crude oil production is forecast to average 9.3 million bopd, up one-half-million bopd from 2016. If the EIA is correct, if US production hits an average of 9.9 million bopd in 2018, that will surpass the all-time record of 9.8 million bbls of oil produced per day in 1970.

9.9 is an average, meaning that by the end of 2018, the US could be producing well above 10 million bopd (which the graph at the link suggests.

After my recent notes on coal and Europe, a reader introduced me to something I had never heard of before: undersea coal mines during the industrialization of Japan in the 19th century. There is a 2017 South Korean action movie, Battleship Island, soon to be released; based on the trailer it will be way too intense for me to watch, so I won't see the movie.

Whether you watch the YouTube trailer or not, I can't recommend. However, if you watch it first, you will have a better "visual" of the wiki entry on Hashima Island. For folks who wondered where some of the scenes in the James Bond thriller Skyfall came from, now you know.

For me, unable to watch a movie like Battleship Island, I will re-watch Tampopo, which now has a new trailer with "4K restoration."

This is still almost a month away and Wyoming officials are already preparing.

I can hardly wait to see the photographs of the park during the eclipse. It will also be interesting to see US gasoline consumption numbers that week.


The Wyoming Patrol would like to inform you of the following information as the 2017 Solar Eclipse event quickly approaches.

The eclipse will take place on Monday, August 21st.

It will start traveling through Wyoming at Grand Teton National Park around 11:35 a.m. MST and follow the path on the map shown below.

No oversize/overweight loads will be permitted in/through WY Sunday, August 20th through Tuesday, August 22nd, 2017. Oversized loads cannot travel during that time period even with a permit in hand.
Plan accordingly before traveling through the eclipse route.
Cell phone coverage may also be limited and no parking is permitted along the highways.
We encourage you to arrive early and stay late to avoid potential traffic congestion.


WE'RE HIRING IN THE BAKKEN!

L&K Electric, a member of the Expanse Energy Solutions Family of Companies, is hiring Licensed and Unlicensed Journeyman Electricians with oilfield or industrial experience to work in North Dakota and Montana.

Individuals for these positions must possess a high degree of initiative, creativity, communication skills, self-supervision, and respect for safety requirements.

L&K Electric offers a very attractive compensation package that includes a competitive salary and enrollment into a full benefits package.