Mark Perry does this every once in a awhile, and I love it: 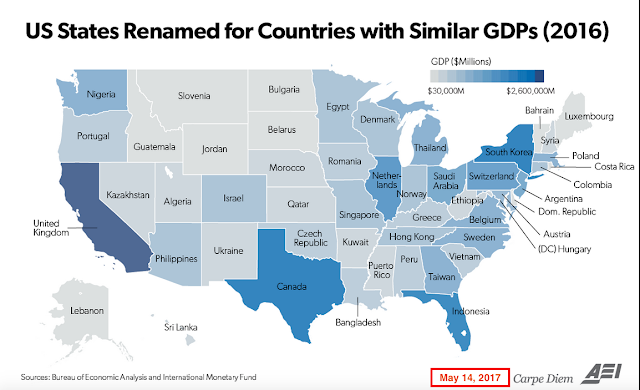 Wow, wow, wow! The Kimbell Art Museum in Ft Worth has another special exhibition, the Phillips Collection.

From the catalogue:
From wiki:


... opened in 1921, the Phillips Collection is America's first museum of modern art.

And it's a special exhibition at the Kimbell Art Museum, opening today, Mother's Day, and running through August 13, 2017.

It's a Windows XP hack.

But let's put this in perspective: according to NPR, 200,000 people worldwide were affected. Global population is 7.5 billion.

President Obama first visited Riyadh about the very same time in his first term also (June 3 - 4, 2009) and according to wiki it was mostly discussion, not much substance.

From The Dallas Morning News, no link; the story is probably everywhere.

A new dinosaur species has been discovered -- the eggs and baby "chicks" were discovered some years ago, but it took researchers awhile to figure out what they had. What they had was this:


"This specimen represents the youngest individual known and the earliest growth stage of a giant oviratorosaur."

The new dinosaur species is Beibeilong sinensis, meaning Chinese baby dragon, and the name, if pronounced "baby-long" is correct, it should be easy to remember: it took a long time time to name a Chinese baby dinosaur.

The species is not found in the Princeton Field Guide to Dinosaurs, Gregory S. Paul, c. 2010.

Meanwhile, speaking of dinosaurs, something completely unrelated but pertaining to "Dakota" and "Lakota," from wiki:


Dakotadon is a genus of iguanodont dinosaur from the Barremian-age Lower Cretaceous Lakota Formation of South Dakota, USA, known from a partial skull.

It was first described in 1989 as Iguanodon lakotaensis, by David B. Weishampel and Philip R. Bjork. Its assignment has been controversial.

Gregory S. Paul, working on a revision of iguanodont species, gave I. lakotaensis its own genus (Dakotadon) in 2008.

Well, that should settle that.

While we're at it, where was the most well-preserved dinosaur fossil every found? In the Canadian oil sands? Yup. By a miner. From National Geographic.


In life this imposing herbivore—called a nodosaur—stretched 18 feet long and weighed nearly 3,000 pounds. Researchers suspect it initially fossilized whole, but when it was found in 2011, only the front half, from the snout to the hips, was intact enough to recover. The specimen is the best fossil of a nodosaur ever found.

Wells coming off confidential list early this next week.

Memo for self: The sundry note received January 20, 2015, is a nice note regarding effect that fracking a new well has on an existing, older well.

Arianna is a flutist in the Cross Timbers Middle School Honors Band, the "highest" band in the school.
Recent CTMS Honor Band competed in Texas-wide competition. Results from the band instructor:


Congratulations to both our Symphonic and Honors Bands for their performances at the Sound Waves Competition in New Braufels on May 13th. Here is the wrap up:

Photo pending.
Posted by Bruce Oksol at 11:23 AM No comments:

Scientists Discover An Extra 5 Million Square Kilometers Of Forest -- May 14, 2017


Scientists apparently can’t predict where forests are right now, but weather patterns one hundred years from now, no problem.

It’s nearly 60 years since the first satellite was launched, and we are still figuring out basic stuff down here on the surface — like which bits are forest.

It is amazing, isn't it? Algore claims he can predict the "temperature of the earth" 100 years from now down to the hundredth of a degree, and yet we didn't even know how much land was covered by forest until .... well, I guess, yesterday.

Apparently, a "recent discovery" increased the known amount of global forest cover by around 9% -- which is a huge amount -- and a huge source of carbon capture (for whatever that is worth).

Monday morning, if things go right, the Algore global warming computer model programming application (AGW-CMP-App) will have an updated formula predicting global temperatures 100 years from now by updating the amount of global forest. Or not. The app is available at the Apple Store for 99 cents.
Posted by Bruce Oksol at 10:22 AM No comments:

Later, 10:28 a.m. Central Time: in the original post I said there was nothing really new that we had not already discussed. Actually there is. It's been obvious for the past year or so, I have just never found it worthwhile to mention, but now Bloomberg mentions in the article linked below.


Merely extending the cuts won't bring oil inventories anywhere close to their five-year average level by the end of December. And let's set aside the fact that the five-year average has been inflated by two years of surplus, which means stockpiles will have to come down significantly below that to return to normal levels.

The first time I saw the John Kemp 2015 and 2016 slides on crude oil inventories, my first thought was that "five-year averages" are now greatly affected by the last two years of huge surpluses.

Analysts are looking at five-year averages. The problem with that is even if we get back to the "five-year average" -- a rolling metric -- we will still be way above the historical average. The historical average, again, as I've been saying for quite some time, is 350 million bbls of oil (not including the SPR) and 22 days of supply.  Of the two metrics, the amount in storage, and the number of days of supply, the latter is more important, but more difficult to forecast than the former, and the former is very, very difficult to forecast besides.

But if analysts are trying to sway the market by talking about five-year averages, the smart investor might want to throw out the "outliers."

OPEC (wink, wink) is going to have to much more than simply extend its current production deal -- its own figures show it needs to double the cut (wink, wink) it made in January. I don't think there's anything new in this Bloomberg story. We've been talking about it for weeks. In fact, even doubling the cut for the last half of 2017 won't make any difference in the big scheme of things, mostly because:
Other recent posts:

Wow, it never quits, the real "Orient Express": now we have a twice weekly freight train from China to Europe. Takes 16 days; arrives in Europe in a shorter time than shipping by sea. The 1,000th freight train departed China on Saturday, headed for Madrid. No doubt carrying solar panels.

Meanwhile, ICYMI: Bakken light reaches Asia for the first time, from Oilprice.com, article by Zainab Calcuttawala, an American journalist based in Morocco. We've talked about this before, the difference between US refiners and Asian refiners:


The Swiss energy trader shipped 600,000 barrels of crude from the Bakken formation along with Mars Sour crude from the Louisiana Offshore Oil Port (LOOP) onto the carrier Maran Canopus in late March. The vessel is destined for Singapore, according to the document.