Disclaimer: I am inappropriately exuberant about the Bakken and the US shale revolution.

A reader sent me the link to Lynn Helms (below). My notes were posted before I saw the Helms video.

Wells off line for operational reasons are tracked here.

Over at "the big stories," under "Energy and the Western Hemisphere": Mexico: Could Go The Way of Venezuela."


Mexico’s oil regulator announced on Thursday the cancellation of October auctions to pick joint-venture partners in seven onshore areas for state oil company Pemex, which is struggling to reverse more than a decade of falling crude output.

The move represents a fresh blow to the flagship energy reforms of Mexico’s previous government that had allowed Pemex to partner with private oil companies for the first time in an effort to boost production.

Joint ventures aimed at developing oil and gas projects, or “farmouts,” have been seen as a way to help reverse a nearly 15-year slide in output by luring significant outside investment from private partners.

The leftist [Reuters article] has instead focused on downstream investment, including a plan to build an $8-billion refinery.

AMLO also says Mexico will build that refinery with no outside help.

Link here.
Posted by Bruce Oksol at 10:47 AM No comments:

Slide presentation (link)
The presentation references "tank-style" development which the company says minimizes / removes the parent / child issue. Link her for ""tank-style" development. Also, here. [Note: references to the company selling its Bakken assets are out-of-date; the plan to divest Bakken assets was taken off the table earlier this year; QEP is still operating in North Dakota.]
Posted by Bruce Oksol at 5:29 AM No comments:

Earlier:  Sophia told me it was "Father's Day" today --- I guess she meant they would be celebrating Father's Day at her school today, and our apartment complex manager will celebrate fathers today because they are closed on Sundays. So, I fixed the subject line -- a reader caught my error -- thank you.

All red: "all" major oil indices are down following the bit of unpleasantness in the Mideast yesterday --
US production sets record: for the week ending May 24, 2019, American production rose almost 100,000 bpd to a record high of 12. 3 million bopd. Source. 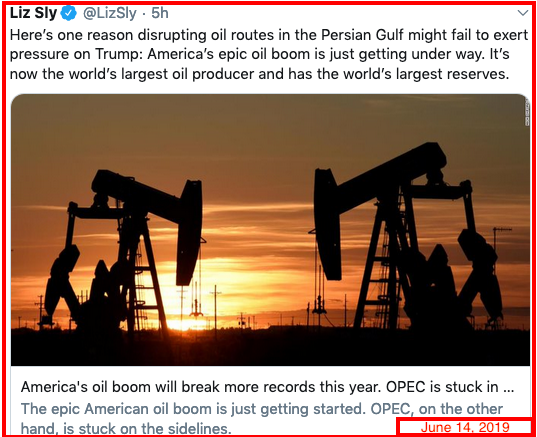 
Natural gas pipeline takeaway capacity additions out of the Northeast over the past year or two, along with suppressed gas production growth in recent months, have relieved years-long and severe constraints for moving Marcellus/Utica gas out of the region and even left some takeaway pipelines less than full. That, in turn, has supported Appalachian supply prices. Basis at the Dominion South hub in the first five months of 2019 averaged just $0.26/MMBtu below Henry Hub, compared with $0.46 below in the same period last year and nearly $1.00 below back in 2015, when constraints were the norm. Today, we continue our series providing an update on pipeline utilization out of the region, and how much spare capacity is left before constraints reemerge.

Posted by Bruce Oksol at 4:51 AM No comments: