Last week we mentioned that North Dakota was on track to regain the title as the nation's #1 soybean producer which it lost for one year,

Hobbyists are backyard beekeepers who keep bees, typically less than 10 hives, to meet Texas’ agriculture exemption for property taxes and/or to produce honey for their household, to share and/or sell locally. Sideliners typically have 50-250 hives but also maintain a full-time job.

“The plight of the honeybee and beekeeping to protect populations is a part of the increasing trend of hobbyist beekeepers,” Keck said. “But around 75% of the residents who participate in our Beekeeping 101 course are doing it to get that ag exemption with the bonus being honey for themselves and to share with family and friends and maybe sell at local farmers markets.”

Commercial beekeepers are those who keep 500 colonies or more. Their livelihood depends on bee husbandry and by moving large numbers of hives around the state and nation to pollinate crops and/or produce honey.

In Texas for instance, a commercial beekeeper may deliver hives in the Rio Grande Valley to pollinate watermelon fields and move those same hives to the Texas Plains to pollinate cotton later in the growing season. Then in the summer they may move their colonies to South Dakota or North Dakota for clover honey production.

Even though the top honey-producing states are North Dakota and South Dakota, California, Florida and Minnesota, Rangel said thousands of those hives are based, or at least overwinter, in Texas as the state offers a mild winter climate for bees.

The celebration of sisters occurs on the fifth day, November 16, 2020. Sophia considers herself Anika's sister.

Anika lives in the apartment building two units down from our little hovel.

Ever since David Tepper revealed that he was moving back to New Jersey after briefly seeking the greener pastures (and substantially lower tax rates) of the Sunshine State (Phil Murphy said he received a personal phone call from Tepper, informing him about the additional $100 million+ in tax revenue headed to NJ), smug liberals on CNBC have been smirking about how wealthy financiers want to be where the talent is/simply can't tolerate not having the opportunity to see three Andrew Llyod Weber musicals a week (though it's not like anybody's going to see a Broadway show right now).

While Manhattan remains the undisputed hedge fund capital, Florida, particularly South Florida and Miami, has seen a steady influx of capital and people over the past five years. Last fall, Carl Icahn announced plans to move his firm's headquarters to Florida, offering employees generous severance packages if they opted not to follow the firm to Florida.

Now, Bloomberg reports that Elliott Management Corp., the investment fund run by Paul Singer, is taking its $41 billion AUM and moving it to West Palm Beach, a community best known to Americans as the former hunting grounds of Jeffrey Epstein.

As Bloomberg points out, Elliott isn't alone in expanding its presence in South Florida. Ken Griffin’s Citadel plans to open an office in Miami next year, and $8 billion Balyasny Asset Management, another Chicago-based firm, is also opening office space in Florida, and will have space for 30 employees by the end of the year.

It appears most of Elliott's employees are staying put, which suggests Paul Singer is simply trying to side-step the burgeoning trend of liberal states dabbling with 'wealth tax' plans to plug the gaping holes in their budget caused by COVID-19. For example, Griffin is leading a campaign against a wealth tax in Illinois. Jamie Dimon recently bashed a proposed wealth tax plan in NY being pushed by - who else? - AOC.

Yesterday Sophia and I made brownies but she took them home with her and left me none.

So, today I plan to bake a cake with Sophia.

Everything is ready. All she has to do is crack the eggs, pour everything together, and then mix. 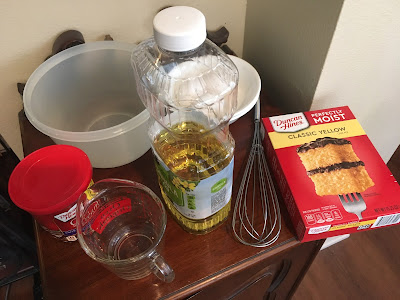 Active rigs decreased by one today, but it means nothing. The Red Trail Energy rig is off the list. That was a carbon capture and storage well; irrelevant. There is no change in the number of active oil and gas wells  (14).

A reader responded to thoughts about future of CLR in a "consolidation environment." [Of course, there's still Whiting, Oasis, and a host of others to consider.] But not to lose the comment, and to make it easier to access (browser search), I've brought a comment from another post to this page, as a stand-alone post:

Not sure if this is GMTA ("great minds think alike" or if my constant mentioning of the fit of MRO/CLR has actually percolated to analysts (or even the companies). But...I told you so. LOL.

"Of those companies left, there’s speculation that billionaire Harold Hamm’s Continental Resources Inc. may come to some agreement with Marathon Oil Corp., Paul Sankey, a New York-based analyst at Sankey Research said in a note."

Note that CLR and MRO are both below $5B market cap, so the combination leaves them still less than Scott Sheffield's magic $10B level.

And they're both "good companies" on some intrinsic level. But given their debt and given $40 WTI strip, you have to really look at it as more like two weak sisters teaming up.

Still wonder who would run it and what would happen to the different organizations. Have to imagine MRO would as the more sophisticated multi-basin player. But Harrold's stake would still be 40%+ of the combined company. Maybe he would take it over? Interesting, interesting.

The "two-weak-sister" argument is an incredibly good argument. As things consolidate -- it's sort of like musical chairs -- all the "stronger" companies -- made stronger by mergers, acquisitions -- start to take seats away from the table for the other weaker players. To get a seat at the table, these weaker "sisters" may need to join forces.

One could see MRO with a wholly-owned subsidiary (CLR) run by Harold Hamm, giving Harold Hamm a directorship on the Board of Directors of MRO ... or as the reader suggests, something even bigger. It also makes it easier to spin off CLR down the road if things improve to make it possible. So many opportunities.

So, let's look at that linked "worldoil" article. Oh, wow, this is getting scary. I actually had that link from overnight and was going to post it later today -- after Sophia and I were finished for the day -- that is amazing -- a gazillion articles that could have been linked by either the reader and/or I and that's the one.

I already had the graphic ready to go. It's at the worldoil link above (archived): 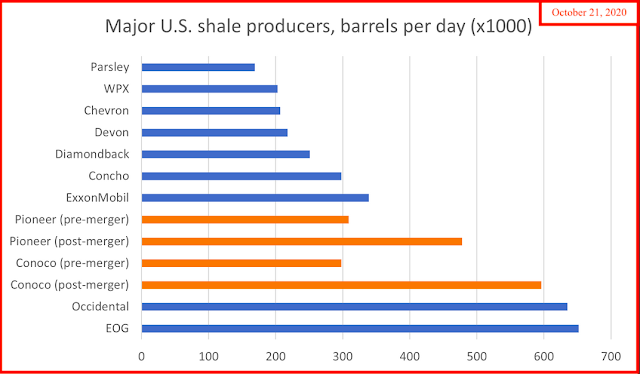 I'll have to check CLR production later, but I believe it is in the 350K+ range but I could be way wrong. If it is 350K boepd, CLR would exceed Chevron and maybe even ExxonMobil, depending whether we're comparing "bbls of oil" or "bbls of equivalent oil."

Over at SeekingAlpha, an article addressing this very issue just popped up.