Shenanigans In Wyoming -- Update -- All That Silly Talk About Banning Fracking Is Off The Table -- November 13, 2016

Do folks remember the Wyoming story -- the one about fracking water in ground table water? I've blogged about it numerous times. Google "shenanigans in Wyoming" at the MDW and you will find updates. Here's the best link, perhaps. There's even a tag a the bottom of the page, EPAWyomingShenanigans.

We now have the follow-up. From Oil & Gas Journal:


Wyoming DEQ finds no frac fluid in groundwater near Pavillion.

Wyoming’s Department of Environmental Quality (WDEQ) did not find evidence that hydraulic fracturing fluids from a nearby natural gas field rose to shallow depths for drinking water and irrigation supplies near the town of Pavillion in 2014, the state agency said on Nov. 7.

“Also, based on an evaluation of hydraulic fracturing history, and methods used in the Pavillion gas field, it is unlikely that [fracing] has caused any impacts to the water supply wells,” it added in a fact sheet accompanying the more than 80,000-page report.

WDEQ conducted a further investigation after the US Environmental Protection Agency said in a 2011 draft report that it found chemicals consistent with fracing and gas production in groundwater near the west-central Wyoming community. The draft report never implied that fracing was unsafe, an EPA official subsequently told a US House subcommittee.

In its June and August 2014 sampling of 13 water supply wells near Pavillion, WDEQ found no organic compounds, other than a pesticide and an ester used in flexible polyvinyl chloride plastics that is a common laboratory contaminant.

Without question, my favorite symphony:


Without question, my favorite media star in this clip: Ann Coulter. My least favorite political stars in this clip, without question, the Bush brothers, followed closely by President Obama. I never thought I would say that -- that Barack Obama is actually marginally more tolerable than the Bush brothers. After seeing this clip. And knowing that neither supported, nor voted for, the GOP candidate.

Only one problem with this clip: #NotLongEnough.

That clip morphs into this one:

Maybe we need this:


You Want It Darker, Leonard Cohen
Posted by Bruce Oksol at 7:44 PM No comments: Links to this post

Email ThisBlogThis!Share to TwitterShare to FacebookShare to Pinterest
Labels: EPAWyomingShenanigans

Last opportunity to advance to final four in the "Race for the Championship." 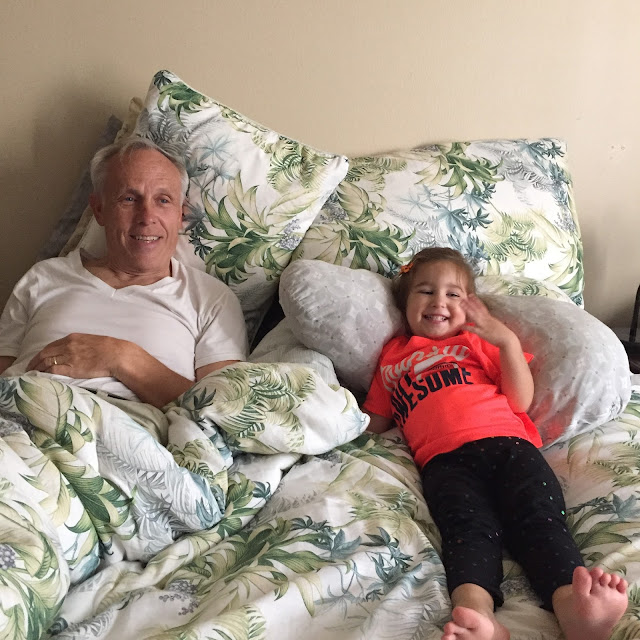 Posted by Bruce Oksol at 1:50 PM No comments: Links to this post

First: Mexican president telephoned/tweeted his congratulations to President-elect Trump. He was the first foreign leader to send his congratulations, on T+1. On T+2 (November 10, 2016), it was reported that Mexico was ready to "re-negotiate" a "modern" NAFTA agreement.

Then: Canadian prime minister called to say he would like to "re-negotiate" NAFTA with President-elect Trump.

Today, T+5, Reuters is reporting that the Chinese foreign minister says his country is "ready to improve relations with the US." That pretty much says it all, doesn't it?

Yes, coming back to you.


Coming Back To You, Leonard Cohen

This is perplexing. Apple is shipping its new display, an ultrafine 4K display, what everyone has been waiting for, along with a 5K.

But for the first time, it will not be an "Apple" display. It will not be the iconic aluminum case with distinctive Apple logo. It will be a "generic" black LG monitor.

Apparently, Apple is getting out of the display business. It is said that Apple partnered with LG, telling LG exactly what was needed and then stepped back, letting LG do the design and material -- apparently "plastic" rather than aluminum.

It is definitely a disappointment. The question has to be asked: what was Apple thinking?

Part of the answer is easy. Monitors are low margin "peripherals." Looking at margins / profits, it made more sense to outsource monitors completely.

The bigger question is whether Apple is risking losing its image? That's a tough one.

Mobile devices, including laptops, will still have the distinctive Apple case and logo.

It's very possible the thinking went like this:
The question is whether this decision will hurt Apple's iconic position among computer users, a question that is being asked by those commenting at the linked article. I don't think so.

As long as they don't go this route with mobile devices, Apple will do just fine.
Posted by Bruce Oksol at 12:02 PM No comments: Links to this post

Affirmative Action For The Electoral College? Perhaps The Wrong Question Is Being Asked; After A Three-Day Weekend -- Only One Well Coming Off The Confidential List -- November 13, 2016

From Oilprice today: To understand the real profitability of a company, we have to look at its cash flow, or what is known as free cash flow. Free cash flow is calculated by deducting capital expenditures (CAPEX) from the company’s cash from operations.

November 13, 2016: when you look at the map below, something else pops up in the electoral vote vs popular vote discussion. "Diversity and inclusiveness" is one of the things that makes America great. If a few geographic locations could decide the president of the US, it appears almost 90% of the US would feel left out. Worse, the "diversity" demonstrated by the grey area would be lost. Many of the "original 13 colonies" don't have even a speck of blue. Other states without a speck of blue: Louisiana, Arkansas, Iowa, Nebraska, the Dakotas, Montana, Colorado, Idaho, West Virginia, Virginia. Some of the states with a single speck of blue is simply the state's one urban center: New Mexico, Oregon, Minnesota, Kentucky, Georgia, Utah. 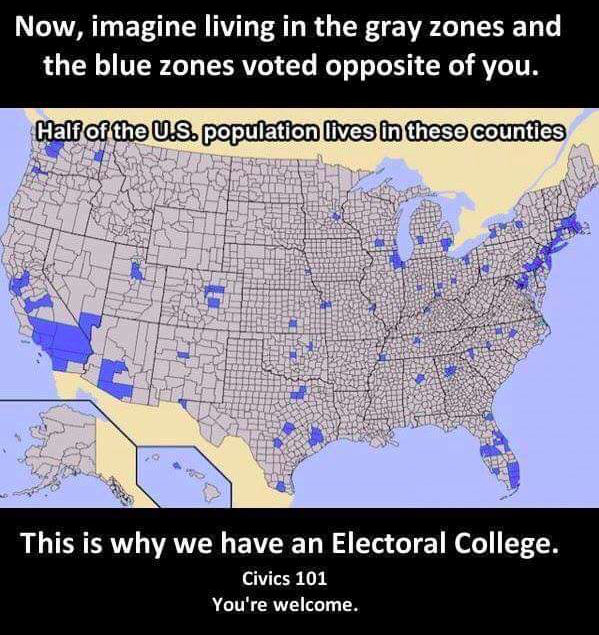 If one is truly concerned about "diversity and inclusiveness maybe there should be some "small state affirmative action." States with small populations but whose products are important for the US (agriculture, industry, mining, energy, military bases, nuclear weapons sites, honey production) should be given extra weight.

Perhaps, it's not the number of people in the state that matters, but the "importance of that state to the union" that counts.
Posted by Bruce Oksol at 10:24 AM No comments: Links to this post

The New York Times has published the cabinet positions and the names of those individuals on the short list for each position. I've posted the update over at one of my earlier posts. The list appears, with two or three exceptions, fairly uninspired:
Key:

There are two subjects that I have never been able to figure out: how to measure electricity and the "subject" of philosophy.

I was introduced to "philosophy" in the summer between my junior year and senior year of high school. I attended a summer course in "humanities" at St Olaf College, Northfield, MN. I was entirely out of my depth, or is it, "out of my league," when it came to philosophy. It was the first time I had even been introduced to philosophy -- by other students, not the professors -- and I was completely lost.

Off and on over the years, I've tried to make sense of it, but have never succeeded. It is strange then, or ironic, or something, that it took a comic book story or a comic book character to move me along. I mentioned this before after seeing the movie Doctor Strange with Benedict Cumberbatch.

For the first time, I "understand" at least to some extent Gnosticism which seems to be as good a starting point on philosophy as any.

I was reminded of that (Gnosticism) again today after reading about the analyses of the recent presidential election; the body language of the two men when they met in the Oval Office; Veeder's column today; the "LoveTrumpsHate" protests; and, the NY Times short list for the president-elect's first cabinet.

As I said to someone else, about the presumed short-list for Trump's cabinet:

If this is really Trump's list, it is truly uninspired. His GOP opponents in the primary would have had even worst lists, but I held out more hope for Trump.

Hillary's cabinet would have been incredibly worse.

Without question, Americans really had awful options this election.

What I did not say, it's really too bad Obama did not live up to the expectations that so many had. But then, on the other hand, I suppose, if he had, Hillary would be the president-elect.

Did I Ever Love You, Leonard Cohen

Link here. In that whole ball of wax regarding Hillary's secret e-mail server there were so many things one could talk about. From the purpose of the server itself, to the lying denials by Hillary, to the "Comey cover-up", and finally the "Comey comedy."

At the end of the day, I doubt most Americans based their voting decision on the "e-mail issue" itself in that last week before the election.

If there was any one thing in that entire, huge ball of wax, it was this: a former President, and the husband of the individual under investigation, meeting with the potential prosecutor, the Attorney General of the United States, and both of them saying that they did not discuss the case. Within 24 hours of that meeting, Comey announced he was closing the investigation.

I find it incredible that a man of Sidney Blumenthal's stature was unable to see that "problem" for what it was. Another example of someone whose eyes were wide shut going into this election.

One wonders if Bill Clinton caused more harm to Hillary's campaign than the FBI? On the "e-mail issue," it was most likely his meeting on the tarmac with Loretta Lynch that was the nail in the coffin. One has visions of the Godfather, making someone an offer she could not refuse.

Posted by Bruce Oksol at 8:15 AM No comments: Links to this post