April 27, 2021: I posted the original note below, last night, and not less than 24 hours later, Charles Kennedy provides an incredibly good example of what I'm taking about.

I'll fill this in later, but this is the thing. The US Secretary of Energy is warning that US oil and gas companies need to diversify so they don't go the way of "Kodak" or Blockbuster Video. Great, great example. The US oil and gas companies need to diversify into EVs and the infrastructure needed to meet the needs of those EVs. There's not nearly enough wind and solar energy to meet even the slightest increase in electricity demand that will be driven by EV economy. The EV economy is going to need more oil (diesel fuel) and gas than ever.

Note: in a long note like this there will be typographical and content errors. Facts and opinions are interspersed and it is difficult to tell the difference in many cases.

This is one of those "aha" moments.

It's going to be a rambling note. I'm not sure there is any way I can post it in a linear fashion.

First we will start with "white privilege." Does it exist; does it not exist? I don't know, but it seems the debate is between those who rely on critical race theory and those who rely on rationalism to form their arguments and/or worldviews.

Now, modulate from white privilege to EVs. [I don't think that's the way most folks would use the verb "to modulate" in a sentence, but it's exactly the right word. I learned that from Sophia's first grade music teacher.]

Those who argue that fossil fuel for personal ground transportation must be banned and replaced with EVs, are using a variation of the CRT argument. I suppose we could call it "critical EV theory" (CEVT).

Those who argue the fallacy of replacing all fossil fuel automobiles with EVs use classical rational thought, AKA critical thinking, AKA the scientific method.

CRT/CEVT seems almost "religious/mystical" unlike rationalism or the scientific method. The bible is a series of narratives, a book of story-telling, but I digress.

Identifying that distinction (CRT/CEVT vs rationalism) doesn't get us anywhere but it was an a-ha moment for me. It explains why some folks are so fanatical about EVs while others are 180 degrees in opposition.

So, we're never going to get past that.

It is what it is. That explains why I quit following Ice Age Now or Deplorable Climate Science [although they are still linked at the sidebar at the right]. I'm in the same camp as the "rationalists." The other camp is made up of the CRT/CEVT thinkers. To think a debate between these two camps would get us anywhere is insane.

So, that was the first "aha" moment I had over the weekend. For me, to argue the insanity of the EV movement is also insane.

I'll still post EV stories but my heart is not in it. The outcome does not matter to me at all any more.

So, let's assume, "we" go down the EV road, that like Governor Newsom (D-California) declares, we all agree that by some date in the future, ground transportation using fossil fuel is outlawed. Only electric vehicles will be allowed / will be legal after some future date. [There will be some exceptions, like those cars in Jay Leno's garage.]

So, I have to, like deus ex machina, lift myself out of rational thinking and try to figure out how "this" works: going to 100% EVs.  This is not binary: rationalists vs CEVT. There's a third way.

Rationally I know 100% EV by some future date cannot possibly work but we are headed down that road, now that the CEVT folks appear to have "won" that argument.

And this is where the second "aha" moment came over the weekend (or maybe it was this morning) when  a reader sent me this photograph: 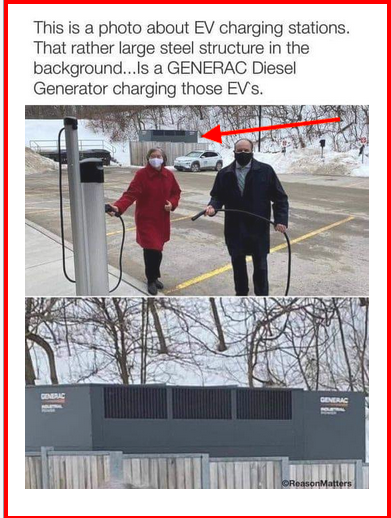 That's how it works. Both the CEVT folks and the rationalists are correct. At some future point down the road, we can be 100% electric when it comes to ground transportation.

There is a second point to be made about the photograph above. The first point is obvious. The rationalists all know that the electric grid will never be able to support 100% electric ground transportation. But yet, at some point in the future, America will be 100% electric when it comes to ground transportation. It seems to be a paradox until one sees the obvious solution, as seen in the photograph above.

At this point, I can take this rambling essay in one of two different directions. I can fall into the trap and argue why wind and solar energy will fail but that's the CEVT vs rationalist argument and will get me nowhere. As noted above it will drive me insane.

What I want to know, is how do I make this argument, regardless of what side I'm on, work for me, as an investor?

The answer is staring me in the face. How do I make this argument, regardless of what side I'm on, work for me as an investor in fossil fuel? It's obvious.

The answer for a fossil fuel investor like me: get on the EV bandwagon now. The faster we move to an all-EV world the sooner it will be obvious that we're going to need a lot of natural gas and a lot of diesel fuel (which means a lot of crude oil, especially the heavy kind, the most dirty kind; we may even need coal). And for an investor like me that's music to my ear: the requirement for lots of natural gas and diesel fuel.

So, it's interesting to see the great automobile companies (Volkswagen, GM, Ford, Toyota) are doing exactly that. They are committing to 100% EVs. They've been through this rodeo before.

Unlike light rail, they won't bury EVs, but they know the grid can't handle it. They know that because they are engineers and engineers are rationalists.

And, then this: once folks get tired of neighborhood diesel generators it's just a hop, skip, and a jump to micro thorium nuclear reactors. Which, of course, will never happen. If CEVT folks are frightened of fracking, there's no way they will accept mini-nuclear reactors in their neighborhoods. 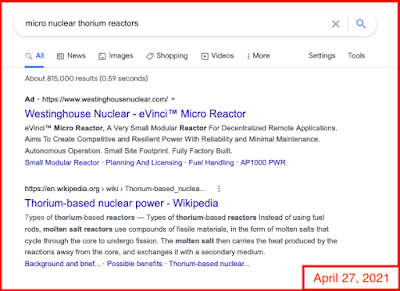 It's all diesel. It's all natural gas. The CEVT folks just don't know it yet.

The Two MRO Wells That Came Off The Confidential List Today -- April 26, 2021

The two MRO wells that came off the confidential list over the weekend:

Census results are in. Link here. 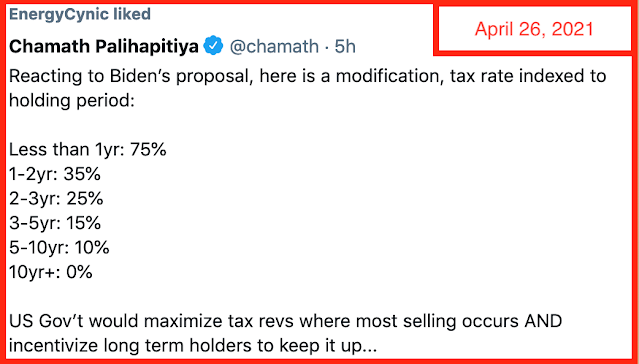 All things being equal, this looks superb. I would love this. A one-year holding period to be considered capital gains as it is now, I've always thought somewhat ridiculous.

A top Obama scientist is not rebutting much of the dominant political narrative. WSJ.

Must be one of them there Neanderthals.

Tesla, 1Q21, beat expectations across the board, despite a chip shortage and still facing Covid-19 pandemic headwinds.

The fact the company grew vehicle unit sales by more than 100% year over year but only grew service centers by 28% and its mobile service fleet by 22% explains why some Tesla customers face frustratingly long wait times for repairs. Service expansion is not keeping pace with the volume of vehicles sold.

Definitions: there seems to be some "disagreement" on the definition of "revenue" and "income" in this release. 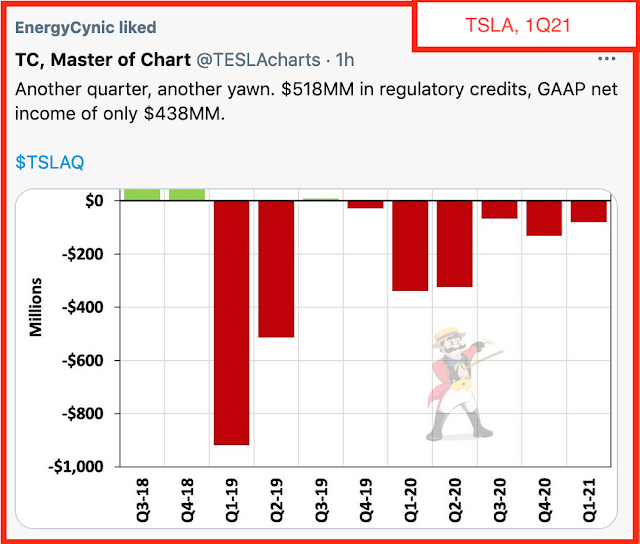 The Newsom announcement. Yesterday it was California, down to less than 400,000 bopd production. Now, today, EIA on Alaska:

China's electricity consumption this year (2021) will increase by 7 to 8 percent from 2020 on stronger domestic activity. Source.

Bakken economy: Basin Electric set to expand grid in area between Tioga, Parshall due to all the growth. Link here. 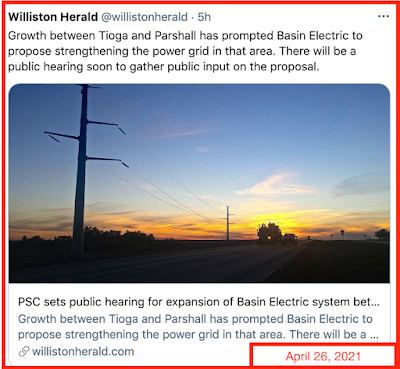 Would you take the JNJ vaccine if the mRNA variants were available and you had a choice.

A four-day review and everything was copacetic, okey-dokey?

Did the "JNJ pause" derail the vaccine rollout?

That drop from 3.127 million to 2.741 million was not trivial. It represents a 12% decrease from 3.127 million, and oh, by the way, the pool of those now "allowed" to get the vaccine has dropped all the way down to everyone over the age of 16. The most recent average should have soared.