US LNG exports: on track for another record high this year. Link here to Tsvetana Paraskova.

U.S. exports of liquefied natural gas (LNG) are set to surge this year from the already record levels in 2020 as demand in Asia and Europe is high, even in the off-peak season. All-time high LNG exports from America, coupled with rising domestic natural gas consumption outside of the power sector, are set to keep the U.S. benchmark, the Henry Hub spot price, averaging above $3 per million British thermal units (MMBtu) this year. This would be more than $1/MMBtu above last year’s average price of just $2.03/MMBtu, the Energy Information Administration said in its June Short-Term Energy Outlook (STEO) this week.

Recovering natural gas consumption around the world and higher than usual demand for replenishing low gas inventories in Asia and Europe have kept LNG prices in these key importing LNG regions high after the end of the winter heating season and ahead of the peak summer demand season.

Economic recovery and a rebound in LNG demand in the world’s largest LNG importing region, Asia, are set to keep spot regional prices around current levels of $10/MMBtu for most of the summer, which could be the highest price for this time of the year in seven years.

Yesterday, SRE jumped 3%; jumped almost $4. I could not find a reason why the jump in price. This is most likely the reason -- the EIA's June Short-Term Energy Outlook released this week. From June 9, 2021:

Brooklyn: a small, non-descript field NE of Williston; "owned" by CLR; excellent example of how an operator systematically drilled one entire field with one rig; holding the entire field by production within a year or so; has received the most comments of any field. 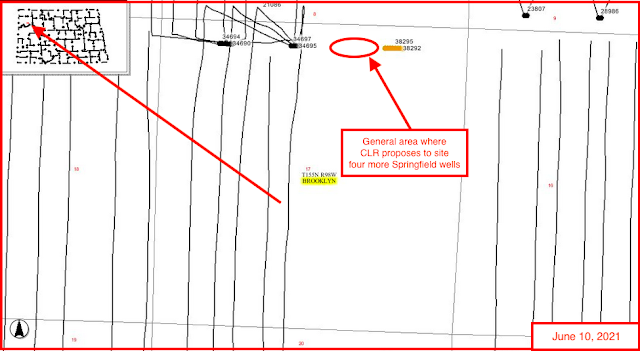 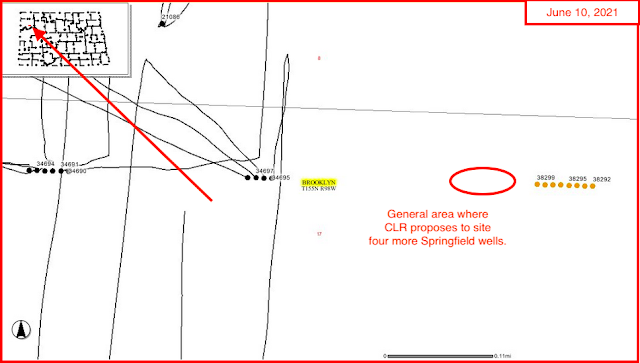 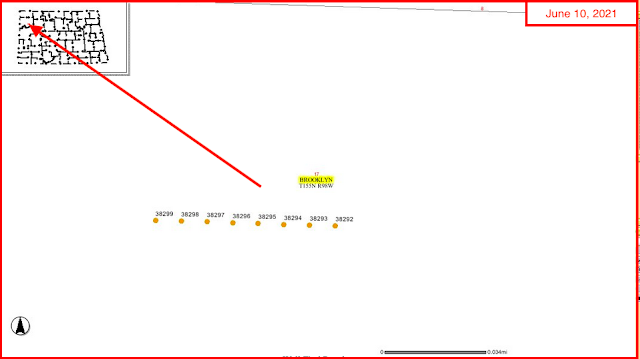 The wells in the graphic above:

Posted by Bruce Oksol at 9:38 PM No comments:

Less Than One Million Vaccinations Per Day, The Last Three Days -- Not Looking Good -- June 10, 2021

Wow, Elon Musk is a master of marketing.

Tesla: officially cancels its flagship sedan, the Model S Plaid Plus; would have delivered 520 miles of range, and acceleration from 0 to 60 in less than two seconds.

Today, this announcement from Tesla, reported in The Wall Street Journal: Tesla to introduce upgraded Model S to jump-start high-end model sales. On CNBC, Phil LeBeau is all over this story; he needs to be paid by Tesla for his commercials. As does Ford. As does Boeing.

Elon Musk had promised redesign would be available months ago, a delay that means Tesla missed some of this year's booming demand for luxury cars;

In other words, Tesla is dropping the "PLUS" and calling it a luxury car. The announced price for this "luxury": $129,990.00. That's the starting price. Generally, the "real" price is significantly higher, but if you have to ask, you can't afford it anyway. The billionaires who can afford this car will get federal and state tax breaks, something the rest of us can subsidize, I guess. Or did Tesla exhaust its federal tax breaks? I've long lost the bubble on that and no one bothers to report it any more anyway. The betting is that Congress will simply extend the breaks as needed (i.e., politically expedient).

The original Model S Plaid Plus was said to have been able to accelerate from 0 to 60 mph in less than two seconds.

The newly announced Model S Plaid is said to be able to accelerate from 0 to 60mph in 1.99 seconds. I can't make this stuff up.

Again, for the record, if I had all the money in the world, I would buy a Tesla. Or two.

Now That TC Energy Has Abandoned The Keystone XL, Some Observations -- June 10, 2021

This page is not ready for prime time.

Also, activists are targeting Big Oil; why that could backfire.

Now that TC Energy has abandoned the Keystone XL, some observations.

The rest of the observations will address the non-political arena:

By the way, another digression:

I thought with the price of oil surging and after the robust numbers in March (2021), Saudi Arabia was rolling in dough.

Wow, was I wrong. Link here. 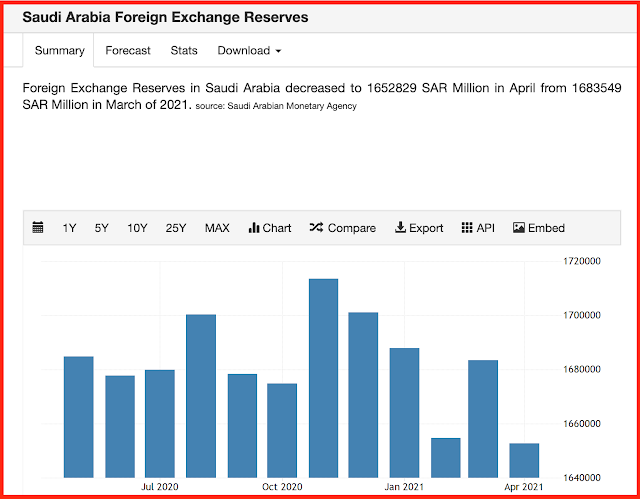 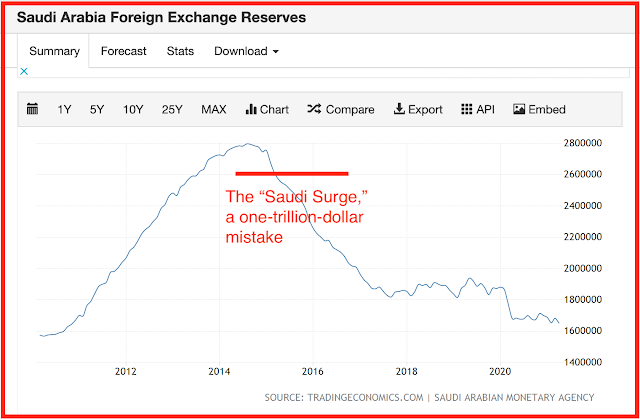 Bottom line: biggest mistake Saudi Arabia ever made -- the embargo. Saudi's embargo was akin to shutting down 1,000 Keystone XL pipelines -- perhaps some hyperbole -- and what happened? Alternate solutions were found, including alternate sources of crude oil.

Link here, from all sources. The most interesting thing about this graph? How really little has changed from 1980 to 2021. Sure from 200 to 400 and back to 200 is a doubling and then a halving, but it's not like there's an exponential change in any part of that graph.

What is staggering to me, is the amount of oil "we" have come to depend on. This is simply not going to change any time soon.

From wiki, the increase in US crude production and imports from 1969 to 1974 is staggering: 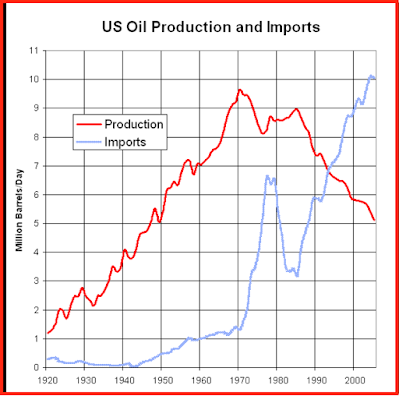 Those who think policies to cut CO2 emissions, including bans on new and existing fossil fuel pipelines, will end global demand for oil are simply out of touch with reality. Really out of touch with reality. Elizabeth Warren's press release today on the death knell of the Keystone XL is the best example of group think in an echo chamber devoid of any understanding of reality.

Monthly production was way down, despite the headline: Saudi Arabia reports May crude oil production of 8.544 million bbls per day, above target. The next question, question: how much oil did Saudi Arabia use domestically for air conditioning?

The kingdom said it would pump 8.482 million bbls/day; the delta? Less than a percent.

But it probably explains why Saudi's foreign reserves are trending so low. Whatever.

Let's see what happens when Iran re-enters the market. Biden presses to re-open the fossil fuel market for Iran and accepts Russian Nord Stream 2 and kills the Keystone XL. Must have played very, very well for his well-heeled political donors. Hey, by the way, the buzz in Washington is that President Biden putters around the White House every day while the real business of the Oval Office is being accomplished by a former president.

Economic data (needs to be confirmed, these may be incorrect, taken on the fly from CNBC):

Covid-19: number of Americans receiving vaccinations has plummeted; average over past two days, less than one million vaccinations given per day;

Not only that, but atmospheric CO2 levels rate of growth appears to have increased during the plague year, previously posted. And the Biden boom will exacerbate things. Expect to see Greta hit the lecture circuit.

Starbucks: regional and temporary -- Starbucks faces shortage of cups, syrup as operations get back to pre-Covid "normal." Link here.

Canada: more Canadian oil than ever imagined the US

Heavy oil: needed by the US more than ever, link here. US crude oil imports (with w/w changes) --

We get the sense that many hydrogen-market observers are looking for a silver bullet — the absolute best way to produce H2 cheaply and in a way that has an extremely low carbon intensity. If anything has become clear to us over the last few months, however, there isn’t likely to be an “Aha!” or “Eureka!” moment anytime soon. Rather, what we have seen so far in regard to hydrogen production has been a veritable smorgasbord of production pathways, with varying degrees of carbon intensity. While costs vary by project, it is also fair to say that a front-runner has yet to emerge when it comes to producing inexpensive hydrogen at scale. There is a silver lining though, if not a bullet, and that is the realization that there are many options when it comes to procuring environmentally friendly hydrogen. Today, we provide an update of currently proposed hydrogen projects.

Doesn't seem to be comforting for oil bulls: 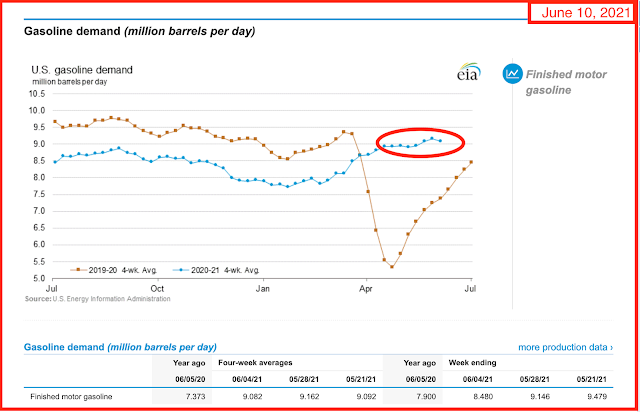 Keystone XL: dead. Milestones here. Pipelines were tracked here but over time this pipeline and others became of less interest to me once I understood the issues. From the very beginning, going all the way back to 2013 when first announced, I said the Keystone XL was dead, killed by Obama. Took a long time to finally die. Will talk about it later.

I've flip-flopped on my feelings regarding the Keystone XL because I have changed in the past ten years.

I'm not in the mood to discuss it now, but I'm correct on this one.