This Is An Incredibly Cool Story -- Folks Are Watching Two Different Movies -- July 4, 2018

Over at the Drudge report there are several links to perpetuate the latest meme: the current US hot spell is something unique, something uniquely related to global warming.

I don't know enough about the history of heat spells in the US to say one thing or the other but I do remember the headlines back in 1977 about the extreme heat in NYC and the 1995 heat wave in Chicago -- a couple of screen shots: 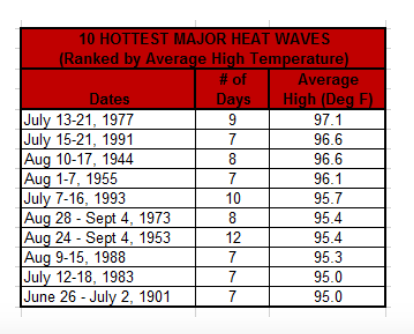 This story is one of those currently linked by Drudge ("highest in years" translates to "highest in two years") -- LOL: 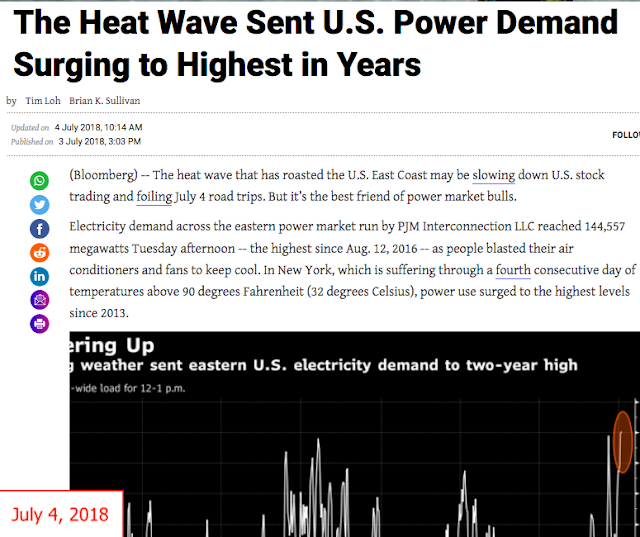 Tell me if you disagree with my, but I would argue that US electricity demand in the East (Chicago to NYC, Boston to Miami) would be significantly less if there were no air conditioners. Just a hunch.

I don't know if the heat wave this year will make the "top ten list" (see NYC graphic above. Currently, the heat wave is four days old. Number ten on the list (in number of days greater than 90 degrees had a run of seven (7) days but the extended forecast suggests the chances of the current NYC heat wave making the top ten list is slim to none, and "Slim" just left town. 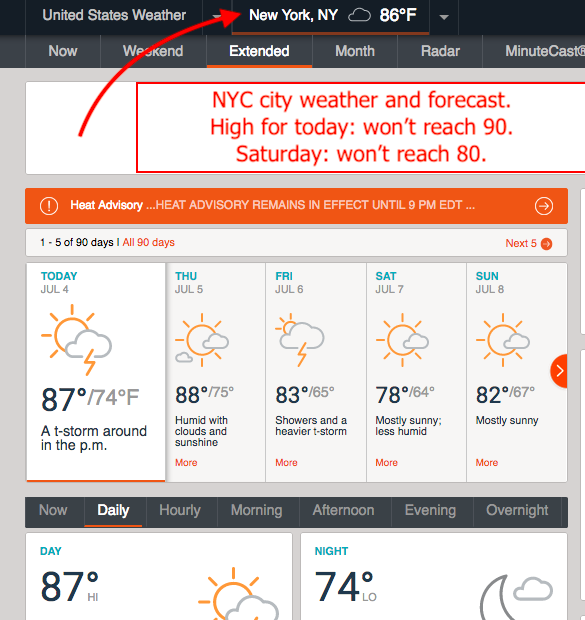 So, the weather / heat spell isn't all that bad, if not taken out of context.

How does one reconcile that record for electricity demand?

It depends on which movie you are watching.

If one is watching the Algore global warming movie (pretty much a boring Powerpoint slideshow), one sees a dystopian world. A world of gloom, despair and agony.

The movie I'm watching is not the Algore movie. My movie is the one in which I see the quality of life and the standard of living in the United States increasing year-over-year and that drives the demand for energy.

By the way, this heat? It's called summer.

Just one more. Roy Clark, in this clip, reminds me of my dad in his last ten years -- Dad was blessed to have inherited a "happy gene" from his mother, Christine.

Cathartes Aura Sinae Spotted Over Venezuela -- July 4, 2018 -- Reminiscing On This Fourth Of July


I was thinking about the vultures circling Venezuela. Over on Twitter there has been more and more chatter in the last couple of days regarding Citgo failing and Russia (Rosneft, specifically) getting ready to pounce. Then, earlier today a tweet suggesting that the US was ready to intervene to keep Russia from getting a toehold inside Venezuela. The tweet suggested that China wouldn't let Russia or the US get the booty without a fight.

So, early this afternoon, tweets suggesting that the US, Russia, and China were getting ready to go head-to-head/toe-to-toe on Venezuela or Citgo or some piece of either or both. It's complicated.

I said it was complicated.

Washington approval of the Swiss request could avert Russia (Rosneft) from taking over a stake in Citgo refineries in the US.

It looks like at least one vulture has landed, to the tune of $5 billion. From oilprice.com, "China throws Venezuela's oil iindustry a $5 billion lifeline."

“We’ve received the authorization for a direct investment of more than $250 million from China Development Bank to increase PDVSA production, and we’re already putting together financing for a special loan that China’s government is granting Venezuela for $5 billion for direct investments in production,” the official said.

The loan is literally a lifeline for PDVSA, which has been unable to stop an accelerating production decline resulting from years of mismanagement and a cash crunch brought about by the tightening grip of U.S. sanctions.

International Energy Agency figures suggest Venezuela produced an average 1.36 million barrels of oil daily last month. This is down from 2.9 million bpd five years ago. President Maduro vowed to increase production by 1 million bpd by the end of the year, but he admitted that the goal would be difficult to meet.

The Bloomberg article is here.

The vulture has tentatively been identified as a Cathartes aura sinae.

I know nothing about cars. Nothing. Well, maybe a little, but not much.

My dad often talked about how exciting it was when his dad bought a Model T Ford . From another source:

I know that my grandfather had a Ford Model T because my dad talked about his father driving the three older kids to high school in the family's Model T, while Carl, the youngest, and Clara, one year old, walked to school. That was in 1929 and dad was starting second grade, seven years old. He would have been one of the older kids in his grade; his birthday came in February, so about midway through the school year he was "one year older."

I did not know it, but there must have been a country school within walking distance from the house. The farmstead was a couple of miles south of Newell, SD, where the high school was located.


Sometime after 1928, my grandfather bought a 1917 Model T Ford to haul [sugar] beets. The Model T had a truck box, similar to the box on the [horse-drawn] wagon, and as best as my dad could remember, it could haul about one ton to a load.

My grandparents were truly "dirt-poor," raising sheep in northwester South Dakota even through the Great Depression. about which they were unaware except what they read in the news. But for them, as poor as they were, to be able to buy their own car speaks volumes about Henry Ford, even if it was eleven years old. My grandfather, had he stayed in rocky, mountainous Norway, near the Arctic Circle, would never have had his own land, his own farm, much less his own car.
But then, get this, looking through the archives, from my dad's biography:


“Then around the end of January [1935] the terrible winter struck. It was 40 degrees below zero for three weeks straight. We watered our cows and horses out of the ponds. It got so cold that the ponds froze solid to the bottom. It was then necessary to haul water from our neighbor’s well, about two miles from our place. We put chains on our 1928 Model “A” Ford. A 50-gallon barrel was placed on the front bumper and leaned against the hood. Two 5-gallon cream cans were hauled inside the car. We made many trips a day to water the cattle. The horses and sheep could get by on snow.

“The roads would drift but that didn’t stop us. If we got stuck we would get out with scoop shovels and shovel ourselves out.

“I was home all this time as the schools were closed for three or four weeks during the worst of the winter."

Re-reading the biography, that now makes sense. In 1928, Henry Ford introduced the Model A, the "replacement" for the Model T. One can assume many, many Model T's all of a sudden became available in 1928 as folks "moved up" to the newer model. The Model T was probably being "given away." And even if not in great condition, my grandfather and uncles would have been incredible mechanics as all farmers and ranchers need to be -- mostly self-taught -- and could have gotten anything to run.

On another note, look at that one line: We made many trips a day to water the cattle. The horses and sheep could get by on snow.

That adds a bit to an earlier entry when a reader and I were discussing sheep and water. And the world's dumbest sheep dog.
Posted by Bruce Oksol at 10:52 AM No comments:

Disclaimer: in a note like with a lot of numbers, and done quickly, and not triple-checked, there are likely to be factual and typographical errors. Feel free to fact check and comment.

Except for frack data, this page will not be updated. The Hess EN-VP and R- wells are tracked here.

This is a nice comparison of a middle Bakken well and a Three Forks 2nd bench side-by-side by a veteran driller in the Williston Basin:

July 3, 2018: DUCs reported as completed:
The frack data is from FracFocus. There were two separate fracks for #33731, but only one reported by Frack Focus for #33732 (I double-checked FracFocus). Once the NDIC reports the frack data, we will know more.

The above may be a bit difficult to decipher, so here is it again. 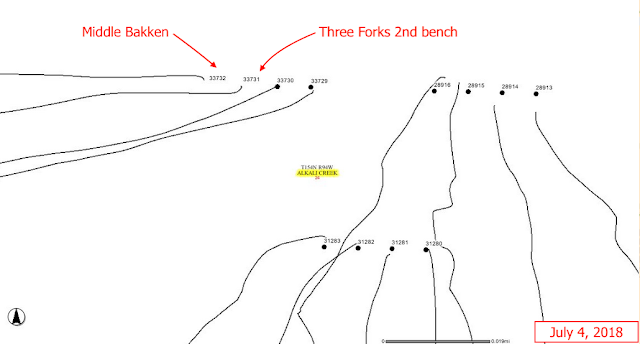 Data from yesterday and today. I took the day off yesterday.


Five new permits (July 3, 2018):
Nine wells came off the confidential list:
Thirteen permits renewed:
And how about this!? Three DUCs were reported as completed; the first in a long time:
I'll begin tracking the EN-VP and R- wells at this post.
Posted by Bruce Oksol at 10:00 AM No comments: