I'm really hooked on TCM. A couple of nights ago, TCM had a Hitchcock extravaganza -- the three movies noted.

The host Ben Mankiewicz shared the introduction with Hitchcock "expert," Alexandre Philippe. I have seen all three movies but, except for Psycho, really do not remember much about them. And my hunch is that I don't remember Psycho all that well either.

I watched the first two (Vertigo and North by Northwest) but simply was unable to stay awake to watch all of Psycho.

It is so much fun seeing these movies again late in life.

Alexandre Philippe considers Vertigo Hitchcock's best film; and, after watching it the other night I understand why. It was a psychological thriller and it clicked: Hitchcock loved human psychology.

But the "thing" that I realized when I saw these three movies the other night was that Hitchcock handed the baton off to the Coen Brothers. Like the Coen Brothers, Hitchcock loved to base his films in various locales:
North by Northwest, I would argue was as much a comedy as the Coen Bros dark comedies.

The Barefoot Contessa: a review.

I occasionally watch VEEP on DVD. We have the entire library, minus the current season, obviously, but I have not gotten past Season Four. I watch it so intermittently that I forget episodes and don't want to move to a new season if I can't recall the previous season. So, like Groundhog Day, I keep re-watching Season Four. Pretty funny.

Last night I was somewhat shocked at the amount of vulgarity in an episode in Season Four. I wondered if the writers had not gone a bit too far.

But today I read the actual "transcription" of President Trump's director of communications, Anthony Scaramucci, and realize that VEEP appears to be incredibly accurate.

Torsten Müller-Ötvös ("Pat, I would like to buy an umlaut"), CEO of Rolls-Royce, announces the first new Phantom in 13 years.

And just think, Rolls-Royce will be making EVs for Great Britain. LOL.

Horizontal Madison Well Northeast Of Minot Has Been Updated -- July 27, 2017

Link here. Only the production data has been updated, through July, 2017. It's still quite a nice well.
Posted by Bruce Oksol at 8:57 PM No comments:

I track this well over at "wells of interest."

If for no other reason, this is an important well (as are all wells of interest) because this data completely alters the EUR (estimate of ultimate recovery) of any given well in the Bakken.  We are starting to see more and more examples of abrupt changes in production/EURs in examples of wells posted by Mike Filloon. 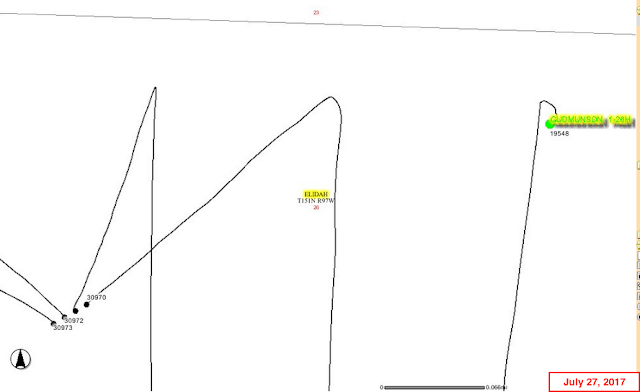 Posted by Bruce Oksol at 6:51 PM No comments:

Q: great question: proceeding too quickly in unconventional?
A: COP agrees; COP is not moving into manufacturing mode until they understand the geology/completion strategies better, but that doesn't mean they are slowing down

Q: flexibility if oil trends down again?
A: yes 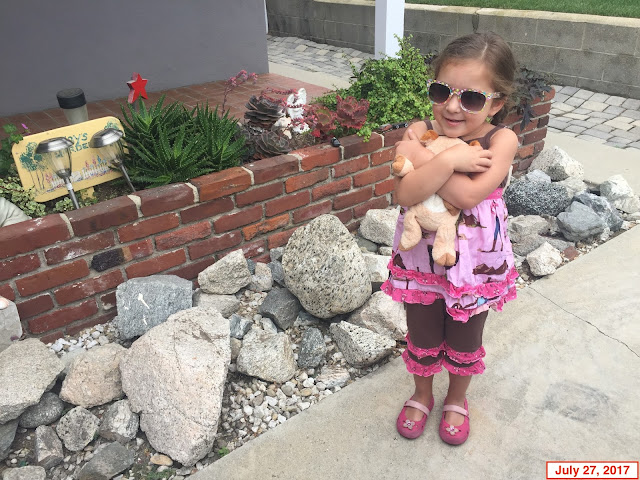 Posted by Bruce Oksol at 5:19 PM No comments:

This is very, very interesting.

About 12:30 p.m. ET, the market plummeted and no one had any news, any explanation. Everything came back (the Dow 30 closed at a new record high) except tech. Tech plunged and the Nasdaq closed about 3% down on a day it was expected to set a new record.

Immediately after the close, Amazon reported an incredibly bad miss and fell 3% in after hours.

Amazon missing by such a wide mark would explain why the Nasdaq fell.

Only one problem: the Nasdaq fell four hours before Amazon reported and never came back. The Dow 30 came back immediately.

Call me a conspiracy theorist but it's pretty obvious. I'm sure President Trump can figure this out; I wonder if we see a tweet? LOL.

[Note: after hours, CNBC says a well-respected analyst released a bearish note during the day. Okay, no conspiracy. The Nasdaq had a flash crash for a reason. LOL.]

Starbucks misses earnings. Starbucks will close all 379 Teavana retail stores -- wow! Starbucks bought Teavana in 2012 for $620 million. The brand, apparently, is not going away -- just the retail stores. If so, another Amazoncoup.

Mattel misses revenues and has a bigger loss than forecast. Girls not buying Barbie or American Doll -- they're buying iPhones. Mattel even "slashed" the dividend to save cash -- CNBC.

First Solar: huge, huge beat: 64 cents vs 4-cent estimate; also huge revenues beat, $623 vs $556 million. Trading stopped for 30 minutes. First Solar closed down a bit during the day; it will be interesting to see what the shares when trading begins again. After hours, FSLR up 13%!

The one on the right is a world-class soccer player (at least in my eyes). The one on the left is a budding competitive swimmer: she can swim 12 feet in 12 seconds: her goal: 10 seconds. 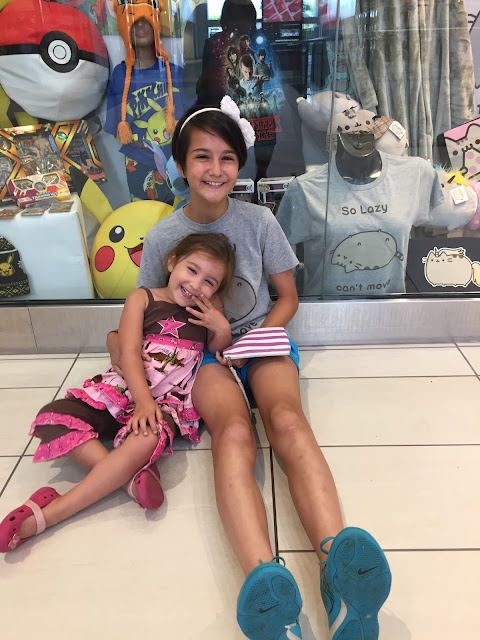 Posted by Bruce Oksol at 3:15 PM No comments: 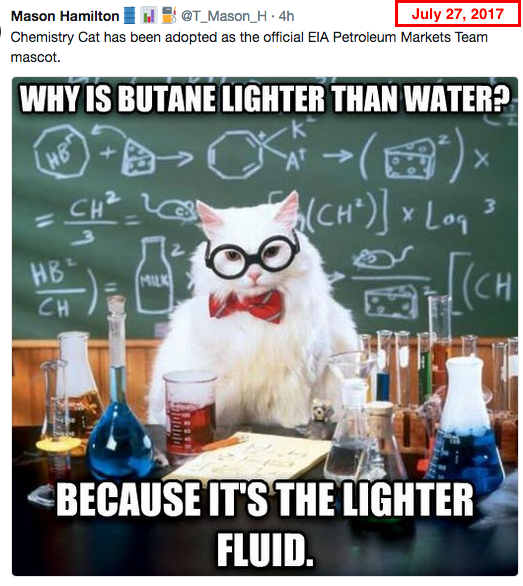 Fake news: need to confirm. Via Twitter, President Trump says that The New York Times has opined that Fox and Friends is the most powerful TV show in America. If accurate, amazing.

Daily WH press briefing: huge new stories breaking yesterday, but press focused on "trans in military." Ms Sanders finally said that if that's all they wanted to talk about, the press briefing was over. One more question came in -- on "trans in military" -- she repeated for the umpteenth time that she had answered the question -- and abruptly ended the briefing -- but did so very nicely, saying she had to go to a White House function celebrating children. Good for her. CNBC anchor was obviously dismayed by the lack of questions on other breaking issues.

Every Arab for himself: stand-off between Saudi Arabia and Qatar will last months, if not years. Saw this movie in 2014. The Wall Street Journal. 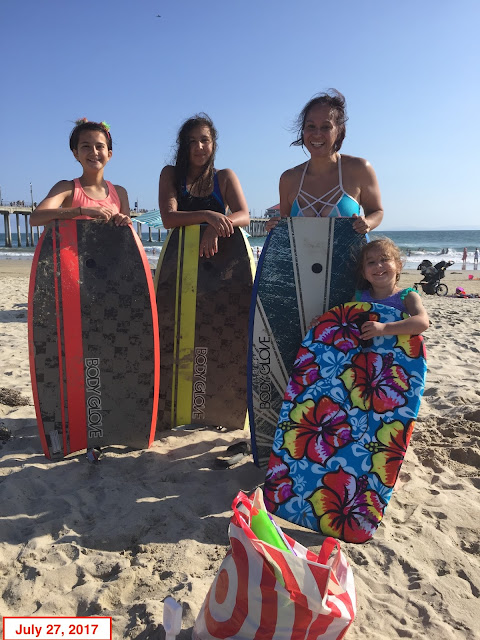 
But here's the rub: market prices don't bear out what the Peak Oilers claim.

In Canada, Edmonton condensate sells at no discount to WTI, and sells at a premium to Canadian Light crude.


To repeat: The United Arab Emirates will import the country's first oil cargo from the US as the OPEC producer sought substitutes to replace Qatari condensate supplies after a diplomatic row.

Every Arab for himself.

Enbridge, 1 -- Chippewas, 0. Link here, data points:
US crude oil, gasoline stocks fall sharply: link here. Reposting from yesterday. WTI is down almost one percent in pre-market trading today. Still 38 weeks to re-balance at this rate of drawdown, and the US driving season will soon be ending. US gasoline demand has hit records
twice in the past three weeks, and barely missed a record that third week.
Posted by Bruce Oksol at 7:04 AM No comments:

Disclaimer: this is not an investment site. Do not make any investment, financial, job, travel, or relationship decision based on anything you read here or think you may have read here.

Trump rally: I'm sure I'm wrong, but scrolling through Yahoo!Finance In Play it seems I have never seen so many "beats" with regard to earnings. It seems it's a mixed bag, on the other hand, for revenues. But with so many "beats" it suggests to me the analysts misunderestimated the Trump rally.

Whoo-hoo! Shell was one of the few oil companies in which I bought shares this past year -- about a month or so ago. Disclaimer: this is not an investment site. Do not make any investment, financial, job, relationship, or travel decisions based on anything you read here or think you may have read here. I would never recommend anyone investing in the oil sector unless one is ready to lose everything. Yes, it can be that bad. Ask those who invested in any number of Bakken operators. But I digress. Shell profits triple. Link here. Revenue was $72.13 billion vs expected $67.78 billion. Net profit was $3.6 billion, up 245 percent. Up 245 percent? I don't think I've ever seen that in any mature regulated utility. So how is the market reacting? It looks like everyone knew: RDS-B was up half-a-percent yesterday, and is up a little over 1% in pre-market trading. Probably tempered by WTI coming down a bit today in pre-market trading. [Nope. Probably wrong; tempered by Shell's pessimistic view for the future -- "lower for longer."] Even with share price up today, RDS-B pays almost 7%.

Active rigs: I've lost the bubble on this but I think the general consensus was that we would see 50 rigs in the summer of 2017.


It’s no secret that the political and regulatory environments for new pipeline development in New York and the New England states are notoriously challenging.

That reputation has been reaffirmed recently, as several natural gas pipeline projects targeting the region have been sidelined by permitting delays or denials.

As a result the region continues to experience gas transportation constraints and price spikes during peak demand periods.

But midstreamers have had some success penetrating the New York City metropolitan market (including the Lower Hudson Valley, Long Island and northern New Jersey), which may bode well for the handful of projects currently looking to serve the area. Today, we review recent and planned capacity additions into The Big Apple and its greater metro area.

Despite their proximity to the lowest-priced natural gas in the country — from the Marcellus/Utica shales — many of the East Coast’s heavily populated metro areas continue to experience gas-transportation constraints and, as a result, pay some of the highest prices in the country for their gas and electricity during peak demand periods.

The New England-New York region is becoming more dependent on gas-fired power, driven by a big push to reduce emissions. Nuclear, coal and older oil-fired power plants are aggressively being shuttered and replaced by new, more-efficient and cleaner-burning gas-fired units. Con Edison (one of the largest utilities in New York) reported that between 2012 and 2016, more than 5,000 large New York City buildings had been converted from oil to natural gas for heating. In addition, the Northeast Gas Association (NGA) in its 2017 Regional Market report said that the number of homes heating with natural gas in the Northeast has increased by more than one million since 2008.