The American Petroleum Institute reported late Wednesday that U.S. crude supplies rose by 8.8 million barrels for the week ended Nov. 9, according to sources.

The API data, which was released a day later than usual because of Monday's Veterans Day holiday, also showed gasoline supplies edged up by 188,000 barrels while distillate stockpiles fell 3.2 million barrels, sources said.

Inventory data from the Energy Information Administration will be released Thursday. Analysts polled by S&P Global Platts expect the EIA to report a climb of 2.3 million barrels in crude supplies.

When I was tracking this, back in 2017, for two years, I do not recall any increase of 9 million bbls of oil. This is staggering. I quit tracking this back in March, 2018. Maybe I need to start tracking it again. My threshold: 400 million bbls.

USPS first class stamps increase by 10%: from 50 cents to 55 cents for a "Forever' stamp. Link here. From Fortune:

This pretty much ends Christmas cards for me.

Posted by Bruce Oksol at 8:12 PM No comments:

See link here. From Mike Fitzsimmons over at Seeking Alpha --

In my mind, there are only two reasons for doing this:
With regard to the latter, perhaps they hope to "define" what they have and then sell it.

But it is amazing to see how much money the oil companies can make when times are good.

CLR has a new corporate presentation at this link. I will look at it later. Considering current price situation and the fact that CLR does not hedge, this should be a very, very timely presentation. 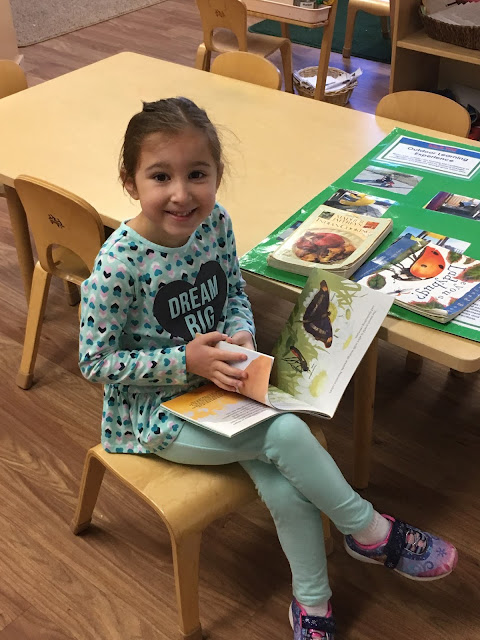 I brought Sophia two "children's" books. She looked at them, put them away, and went back to the book she had started "reading" yesterday: a Mediterranean recipe book. I am not kidding.
Posted by Bruce Oksol at 9:30 AM No comments: 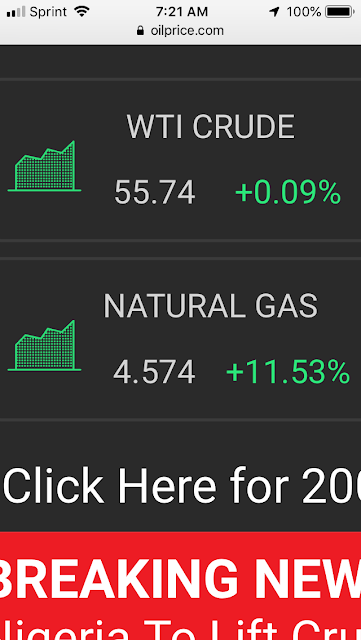 By the way, the current slump in oil prices?

WTI?  It was classic bait and switch.

1. Iran sanctions announced six months before they were to go into effect.
2, Iran produces at max level to sell as much as they can before sanctions go into effect.
3. Likewise, Russia and Saudi max out production -- were ready to make up for Iranian shortfall.
4. So, now we had more oil on the market than ever before.

4a. China buying as much oil as fast as they; as much storage as they have.
4a. Canada hit really, really hard.

5. Sanctions go into effect.
6. Once any country has a piece of paper that has "waiver" on it, it opens the door wide open. No one can keep track of how much oil is coming in; exceeding Iran sanctions or not.
7. Bottom line: no Iranian sanctions on oil.

7a. Classic bait and switch.
7b. Trump is smart enough to know exactly what was going to happen.
7c. Obama had his war on coal; I'm convinced that Trump has his war on oil -- in the sense that he wants to drive prices down to lowest in many, many years. That will be a great headline going into 2020.
7d. Low, low oil prices, by the way, kill the renewable industry.

8. Mideast Arabs are the greatest traders in the world -- I learned that when stationed in Turkey. They played this very, very well.
9. It will take at least six months to turn this around and only if Saudi and Russia cut significantly. Russia won't cut. Saudi might cut. Saudi is in deep doo-doo.

This morning I was the driver for all three granddaughters. First two to middle school and then high school. Then back to the house to get Sophia ready for TutorTime (day care). Everything -- just like clockwork.

Sophia's letter of the day: "s". We came up with all the "s" words we could think of on the way to school. She had a "scarecrow" for "show and tell."

With the older granddaughters our discussion:
I really wanted to talk about ionic bonding and covalent bonding with the oldest, but I don't think she was ready for it, and we probably needed a bit more time -- maybe a good  subject for our longer ride to water polo Thursday evening.
Posted by Bruce Oksol at 9:12 AM No comments:

Unprecedented (haven't used that word in a long time on the blog): 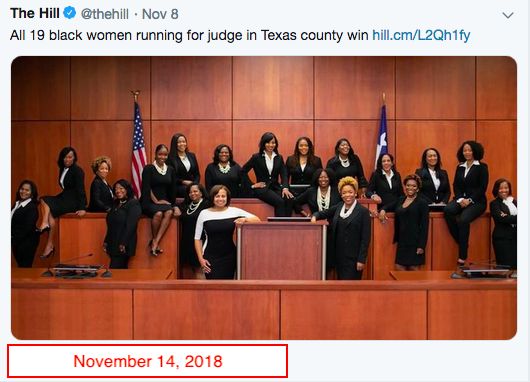 And I assume they won without Hillary's help, without Michelle's help, or without Trump's help. Good for them.
Posted by Bruce Oksol at 6:40 AM No comments:

Hang on to your hats: 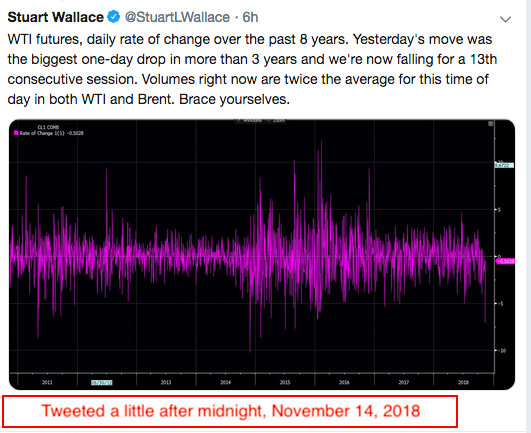 The "shale price band." From The Financial Times. This is a pretty good article. Some data points:


RBN Energy: how much could coal generation stem gas price upside in a cold winter?


The U.S. natural gas market enters winter this year in a delicate balance: production is at an all-time high and growing fast, but gas storage inventories are well below year-ago levels and the five-year average — and at an all-time low relative to consumption. If winter weather is normal or mild, the U.S. gas market will likely begin to settle into a period of sub-$3/MMBtu prices. But this year’s low inventory level means that colder-than-typical weather this winter could spell more gas price upside than the market has seen in many years. Today, we continue our review of the current gas market with a look at the relationship between gas- and coal-fired generation, and at how the combination of low gas storage inventories and low coal stockpiles might play out this winter.

Entering the winter (before forecasts turned cold), our NATGAS Billboard called for an end-of-March underground gas storage inventory level of about 1,250 Bcf (or 1.25 Tcf).

Even a moderately colder winter can add 400 Bcf of residential and commercial heating demand, and the upside to industrial demand could add another 100 Bcf.

But a colder-than-normal winter also adds demand in the power sector, more so now that increasing numbers of people are heating their houses with electricity, particularly in the South. We estimate that a moderately cold winter would add about 200 Bcf to gas demand for power generation, all other things being equal.

Of course, the higher that gas prices climb, the more expensive it gets to source gas or coal from somewhere other than storage or stockpiles, and therefore the more comfortable utilities get with drawing down gas storage inventories and coal stockpiles to meet winter demand. We saw how gas and coal prices could spiral upward in the Polar Vortex winter of 2013-14. Gas prices rose and coal became more economic, but declining coal stockpiles — along with logistical constraints around delivering coal from mines in the West to power plants in the East — meant that coal generation didn’t prevent gas prices from climbing to $6/MMBtu in February 2014.

So this winter, the precise elasticity — just how high gas prices would need to rise to pull gas and coal out of inventory — will not be so predictable as it would be, for example, in response to a short-lived gas production outage. Rather, this elasticity will depend on the trajectory of winter weather (early versus late cold, extreme versus moderate cold, etc.), of gas supply growth (whether the market is comfortable that gas supply will be robust a few months down the line), and likely other factors.

A somewhat unpredictable power-sector response means that we need to look elsewhere for factors that might stem gas price upside in a colder-than-normal winter. That brings us to a relatively new potential source of gas demand elasticity in the U.S.  — LNG exports — which we’ll cover in the final episode of this series.

Much more at the linked article.
Posted by Bruce Oksol at 6:14 AM No comments: