It looks like Daimler Truck will be spun off and its stock market listing on December 10, 2021.

Apparently Daimler AG will rename itself as Mercedes-Benz some time later.

See also this link regarding Iveco.

This was a nice data point in that linked Iveco article:

Traton this year snapped up U.S. truckmaker Navistar as the sector consolidates in the face of the costly challenges of developing both fully-electric models for short-haul trucks and hydrogen fuel cells for longer distance trucks.

It's my understanding that Daimler plans to do exactly that: the new trucking company will have two divisions: the EV division, and the hydrogen division.

Before we get to the story, INTC had a huge day on Wall Street today: during normal trading hours, INTC was up almost 4% but then after hours when this story must have been breaking, INTC was up almost ten percent. Amazing. I know at least one reader that will be happy. LOL.

Story here. If there's a paywall, the story will be everywhere tomorrow morning. I track EV partnerships here.

Intel is planning to publicly list shares in its Mobileye self-driving-car unit, according to people familiar with the matter, the latest move by Chief Executive Pat Gelsinger to revive the semiconductor giant’s fortunes.

The company is expected to announce the move, which could value Mobileye at north of $50 billion, as soon as this week, the people said.

There are no guarantees Intel will ultimately follow through with an offering.

Mobileye, an Israeli company Intel acquired in 2017 for around $15 billion, specializes in chip-based camera systems that power automated driving features in cars.

Mobileye’s revenues have roughly tripled since Intel bought it. It had $326 million of revenue in the third quarter, a 39% year-over-year increase. Intel had over $19 billion in revenue in the period.

By relisting shares of Mobileye, Intel could tap into surging investor demand for companies betting on the future of transportation.

The initial public offering market has also been on a tear, with investors clamoring for new technology issues.

Mobileye was created by Amnon Shashua and Ziv Aviram when most cars counted seat belts, anti-lock brakes and air bags as central safety components. They set out to create vision-based systems that help cars see the road and communicate with critical systems—including steering and braking—to respond to situations that could lead to a crash.

Apple will stick to its own schedule, but these new announcements, seemingly coming out every week, must be putting a lot of pressure on Apple to make an announcement. My hunch: get through the challenging holiday season and then make the announcement NLT 2Q22.

Clearing Out The In-Box -- But Look At This -- Toyota Announces Largest Private Capital Investment In North Carolina History -- December 6, 2021

This was the top story of the day: Toyota to build a $1.29 billion electric vehicle battery factory in North Caroline.  Link here.

Toyota will build a $1.29 billion battery factory in North Carolina in an effort to bring some of its electric vehicle supply chain to the US.

The news comes on the heels of Toyota’s announcement that it will invest around $13.6 billion in battery tech over the next decade, including a $9 billion investment in production, as it attempts to electrify its vehicle lineup.

Toyota plans on spreading the $1.29 billion for the new factory over the next decade, but production at the facility is scheduled to begin in 2025.

In the first year, Toyota plans on producing 1.2 million battery packs for its upcoming lineup of electric vehicles.

“This investment, which I believe is so far the largest private capital investment in North Carolina history... will create at least 1,750 new jobs and help us develop and localize automotive battery production,” Reynolds said during a press conference, “which will pave the way for battery electric vehicles built here in the United States of America.” 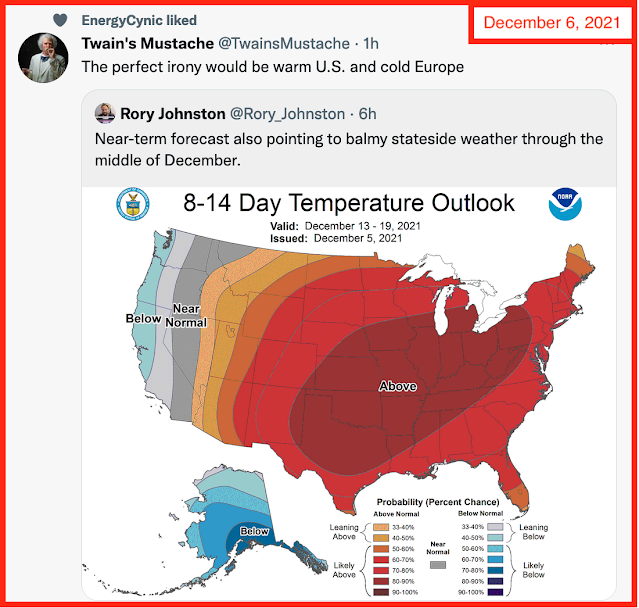 Coal: lowest level of US coal stockpiles recorded for the month of September, ever. Link here.

Refiners? Doing well? Crude oil is really inexpensive from a historical perspective, and gasoline is very high considering the low price of oil. It will be interesting to see MPC earnings this next quarter.

Does no one see the irony in this; this is the second such headline by The Bismarck Tribune in the past couple of weeks -- link here, and I quote:

Posted by Bruce Oksol at 7:31 PM No comments:

Posted by Bruce Oksol at 7:05 PM No comments:

Data from the NDIC daily activity report. In a long note like this there will be content and typographical errors.