Back on May 6, 2015, I had a short piece on Oilprice.com. If interested, at the link, you will need to scroll down to a section called "Peak Oil -- Again" to see my comments on Oilprice.com.

If I am correct, and I could be very, very wrong about Oilprice.com, I find it interesting to learn that:


OilPrice.com is a USA TODAY content partner offering oil and energy news and commentary. Its content is produced independently of USA TODAY.

Having said that, this article today, "New 'Silk Road' Could Alter Global Economics" is incredibly fascinating.

There are so many story lines here, I cannot even begin.

The first story line that comes to mind, of course, is the new powers that the president of the United States will have in setting up trade deals with Asia in a "secret deal" worked out between President Obama and the GOP. The Dems, led by Pocahontas, were against this "secret deal."

Be that as it may, here is an interesting observation from the USA Today story about the new Silk Road initiative:


After failed attempts by the US to persuade allies against joining the bank, the US reversed course, and now says that it has always supported the project, a disingenuous position considering the fact that US opposition was hardly a secret. The Wall Street Journal reported in November 2014 that "the U.S. has also lobbied hard against Chinese plans for a new infrastructure development bank…including during teleconferences of the Group of Seven major industrial powers.

The Huffington Post's Alastair Crooke had this to say on the matter: "For very different motives, the key pillars of the region (Iran, Turkey, Egypt and Pakistan) are re-orienting eastwards. It is not fully appreciated in the West how important China's "Belt and Road" initiative is to this move (and Russia, of course is fully integrated into the project).

Regional states can see that China is very serious indeed about creating huge infrastructure projects from Asia to Europe. They can also see what occurred with the Asia Infrastructure Investment Bank (AIIB), as the world piled in (to America's very evident dismay). These states intend to be a part of it."

I assume everyone in the world except me was aware of this new "Silk Road" initiative. But because my attention was on Greece for the past five years I completely missed this Chinese story.

Seriously, I have never seen the "Silk Road" story mentioned by CNBC (on the net or on television) but hardly a day goes by that there is not yet another story of Greece defaulting. [Bloomberg is reporting tomorrow that the Greeks will blame their problems on the creditors who have been loaning them money. LOL.]

The "Silk Road" story will be archived over at The Big Stories, as part of the Global Power Shift, the growing Russia-China hegemony.

Note that Russia, of course is fully integrated into the project.

There seem to be as many nations signing up to this "big deal" as there were signing the Kyoto Protocol (some of whom have now "unsigned").

There really is a global shift occurring:
And, the Chinese are working hard to make China the new Promised Land.
Posted by Bruce Oksol at 10:41 PM No comments:

Some Nice Wells Coming Off Confidential List After Long Weekend -- May 25, 2015

Another example of a good well taken off line. The four wells on this pad have all been completed so this one is probably not off-line due to need to complete neighboring wells.


Other wells on this pad:
Most recent production for 25914:


I remember blogging, when the issue first came up, about the slippery slope regarding flaring.

N.B.:  these four wells are all on the same pad. Natural gas from two of the wells is being sold, so we know there is a natural gas pipeline to this pad. Or at least we should be able to assume there is. There must be another reason two of these wells were taken off line.

Location of this four-well pad, just a few miles east of Williston, one of the busiest sites from the very beginning; easily accessible, not on federal land. 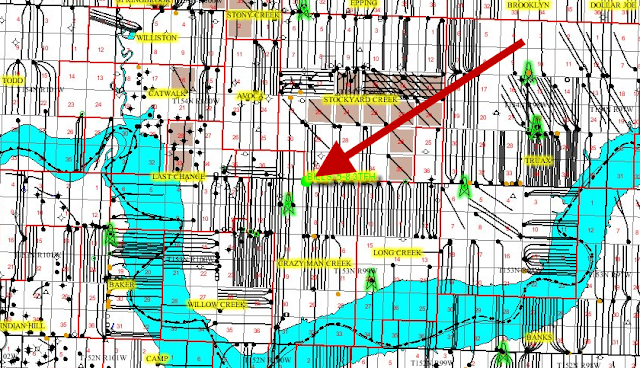 
The U.S. Fish and Wildlife Service today (May 22, 2015) announced its intent to address millions of grisly and unnecessary bird deaths by strengthening implementation of the Migratory Bird Treaty Act, one of the nation’s oldest and most important wildlife conservation laws. The process will address threats like uncovered oil waste pits that trap and kill birds, gas flares that lure and incinerate birds, and unprotected communication towers and power lines that kill and electrocute birds by the tens of millions each year.

There was no mention of wind farms in this article. Wind farms are still exempt from laws protecting migratory birds.