February, 2017, on-line results. Done quickly. There will be factual and typographical errors.

There was an article earlier today from The Los Angeles Times about the excess wind and solar electricity California had. I was curious how much all that "free" electricity was saving California in utility bills.

This is the story I was referring to but from a different source: how California utilities are managing excess solar power. The article begins:


The Golden State is ramping up renewable energy as it pledges to be a bulwark against the Trump administration's pro-fossil fuel policies. But first, it has to figure out what to do with all the excess power it generates when the sun is shining and the wind is blowing.

California's solar farms create so much power during daylight hours that they often drive real-time wholesale prices in the state to zero. Meanwhile, the need for electricity can spike after sunset, sometimes sending real-time prices as high as $1,000 a megawatt-hour.

And that, folks is the problem with non-dispatchable energy, also known as fool's gold, or solar energy. It takes a lot of "daytime FREE solar energy" to offset electricity that costs $1,000 a megawatt-hour at night. Hey, by the way, when do Tesla owners charge their coal-powered cars? Yup, at night. When do kids work on their computers at home? Yup, at night.

Some links on electricity rates across the US

Nebraska.gov, data for 2015, all states; least expensive to most expensive, some examples:
EIA: average retail price, by state, January 17, 2017 (lower 48; does not include most expensive, Alaska and Hawaii, which are "special cases"):
I was reminded to look up that data: there is now a concern whether California's power grid will be able to keep up with legal marijuana's demand. Very, very high use of electricity.
Posted by Bruce Oksol at 4:53 PM No comments:

Earlier today I posted a note on Bakken 2.0. A reader provided this line a few moments ago, from Investor's Business Daily: shale producers will soon reveal how lean and mean they really got.

Not much new was said that regular readers don't already know.

I'm always interested in frack sand data. From the article:


On the completion side, however, some of the innovations are adding to cost pressures. The biggest is the use of higher proppant loads to release more oil in the fracking process. Longer lateral wells also require more sand. Anderson said producers are now using an average of 4,600 tons of frac sand per well vs. 2,600 tons in 2014.

I'm not seeing that; must be in the Permian. My hunch is that the average amount of sand being used in the Bakken is about 4 million lbs, maybe as high as 6 million lbs, but I could be way off. My number is simply based off anecdotal data, looking at a lot of completion data, but nothing comprehensive or statistical.


Gary Gould, Continental Resources' vice president of production, told analysts last month that the company is using 1,000-2,000 pounds of fracking sand per foot in the Bakken shale play vs. the 3,000 pounds per foot other operators are using. EOG even sees its sand costs falling by 18%, saying it has multiple sand vendors.


In the Bakken, Continental plans to increase the number of completion crews there to eight by mid-May from five now, but maintain the number of drilling rigs at four through the end of the year. 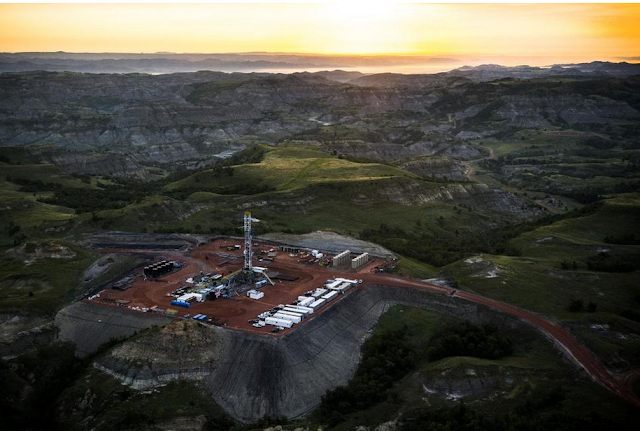 The headline is worth another 10,000 words: US News -- Best States -- North Dakota's oil boom fuels economic growth. From the article:
Just wait until Bakken 2.0 hits its stride, probably sometime in 2018 or 2019

Actually this link to US News, Best States, 2017, shows North Dakota at #4:
Again, it looks like "how/what" is measured.

The new DAPL interconnect will tie into the Partnership’s Bakken crude oil gathering system which consists of interstate pipelines with capacity to transport up to approximately 40,000 barrels per day of crude oil. In addition, the Partnership’s Bakken crude oil gathering system has crude oil trucking capabilities located near Watford City, ND that provides greater producer access to market alternatives and off-take capabilities. AMID recently added hydrogen sulfide treating to its Bakken system allowing customers to meet pipeline specifications for crude oil delivery thereby expanding customer service offerings and the competitive footprint of the system. Leveraging off the recent additions to the Partnership’s system and the new connection to DAPL, AMID will be able to deliver an incremental 20,000 barrels per day to market.

Posted by Bruce Oksol at 3:56 PM No comments:

Somehow it looks like I completely missed this one. From Fuelfix:

Note: the trees in the photograph below are redbud trees (see first comment from a reader). Most likely they are Oklahoma redbud trees. I will let Arianna know.

We have these really beautiful tree - bushes here in north Texas. I think they are trees but they tend to be a bit short and very broad. I keep telling myself to google to find out what they are.

On the way to water polo today, I mentioned them to Arianna as we drove by some of those beautiful flowering trees. Without missing a beat, she said they were crepe myrtle, and that depending on "how" they grow, they can be considered either trees or bushes.

Moments later we passed some other flowering trees which she said were either flowering dogwood or magnolias. I suggested that I associated magnolias more with the southeastern US, and she agree, either South Carolina or Georgia.

But crepe myrtle? I had never heard of them before. Where Arianna picks up all this information, I will never know.

She then went on to tell me her project at the moment pertained to the atmosphere, and she named the various levels of the atmosphere, from the troposphere to the ionosphere. 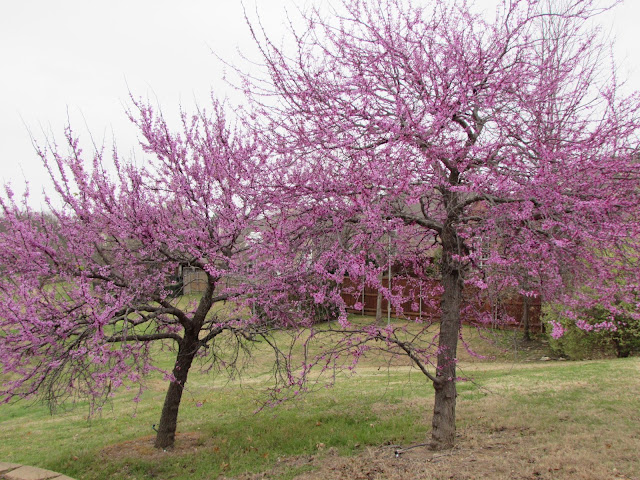 A couple of weeks before the end of 2016, there was betting among the Chicago police force whether homicides would end above 800 for the year (2016) for Chicago. The betting was that the number would come close but would not hit 800. I ran the numbers, threw in the fact that the last couple of days in 2016 were Friday/Saturday and suggested the number would come in just over 800, at 801 or so.

Today, a reader tells me that with some victims now being taken off life support, the number has hit 801 for Chicago for 2016. Apparently some folks are upset with the way records were kept -- if upset, I assume some folks lost a bet or two.

And so it goes.
Posted by Bruce Oksol at 3:52 PM No comments:


Original Post
In the graphic below, the two wells, #17718 and #16730, were both taken off-line when the three horizontals between them were fracked. Obviously there were portions of #16730 that were much closer than 0.7 miles. 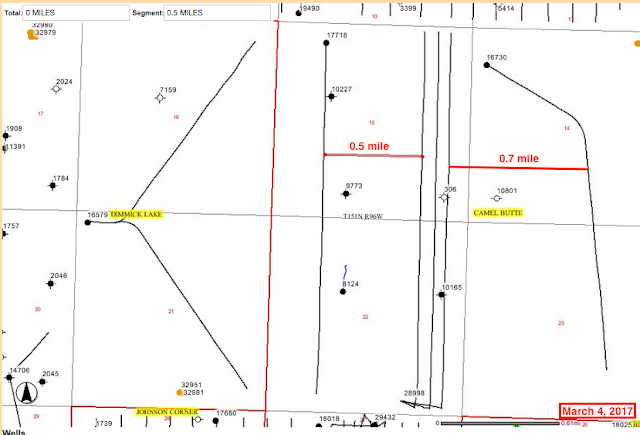 In this case, it does not appear that there was any noticeable bump in production for #17718, but we have production data for only 17 days after the well was brought back on line; if I don't forget, I will check production on this well in the next month or two.

This is pretty cool for college students.

One can use the Apple Pencil and the iPad Pro and take notes during a lecture. And record the entire lecture at the same time. Wow, I wish I had that when I was going to school. Pretty impressive.


Trump says Trump Towers was wire-tapped during the 2016 campaign.
Obama says no.

Who are you gonna believe?
Posted by Bruce Oksol at 12:33 PM No comments:

I track list of potential new LNG export facilities at this site. At that site, these links:
Today, over at Rigzone, this appears to be Texas LNG (Third Point LLC - Samsung / NYC-based investment fund consortium):

Such an approach reportedly would lower overall project costs, reduce complex onshore civil construction works and minimize local onsite environmental impacts as well as commissioning costs during permanent installation on the deepwater Brownsville Ship Channel near the Gulf of Mexico.

Today of all things, over at Bloomberg via Rigzone: Leaner, Fitter, Faster: US Shale 2.0 Challenges OPEC Again.


After a two-year downturn spurred by oil’s plunge to $26 from $100, U.S. production is on the rise once again, opening the door for another showdown with the Organization of Petroleum Exporting Countries. The number of U.S. drilling rigs has grown 91 percent to 602 in just over nine months. Meanwhile, production has gained more than 550,000 barrels a day since the summer, rising above 9 million barrels a day for the first time since April.

And as shale returns with a vengeance, it’s not just the pioneer cowboys that dominated the first phase of the revolution in the Bakken of North Dakota. This time, Exxon Mobil Corp. and other major oil groups are joining the rush. It’s a new reality that OPEC and Russia -- the main forces behind the production cuts approved last year as a solution to re-balance the global market -- are starting to acknowledge.

"With $55 a barrel, we see everyone very happy in the U.S.," said Didier Casimiro, a senior executive at Moscow-based Rosneft PJSC.

Long a world leader in multi-billion dollar oil developments that take years to build and even longer to profit, Exxon is diverting about one-third of its drilling budget this year to shale fields that will deliver cash flow in as little as three years, Chief Executive Officer Darren Woods said this week. In January, Exxon agreed to pay as much as $6.6 billion in an acquisition designed to more than double the company’s footprint in the Permian basin of west Texas and New Mexico, the most fertile U.S. shale field.

A reader sent me the link to an article regarding the "top" grossing neurosurgeon in Oregon, and asked for my comment. My comment:

Early in my "career" --- decades ago .. at the University of Southern California (USC, Los Angeles):
My first clinical rotation in medical school was neurosurgery. It was a 3-week rotation. It taught me all I needed to know about the personalities in that profession (neurosurgery) -- and not one thing in that article surprises me -- not even the fact that prior to Delashaw, Oregon state's highest pensioner was a football coach -- what a great county, huh?

I have incredible respect for neurosurgeons; my hunch is there is enough in this story for two or three books. 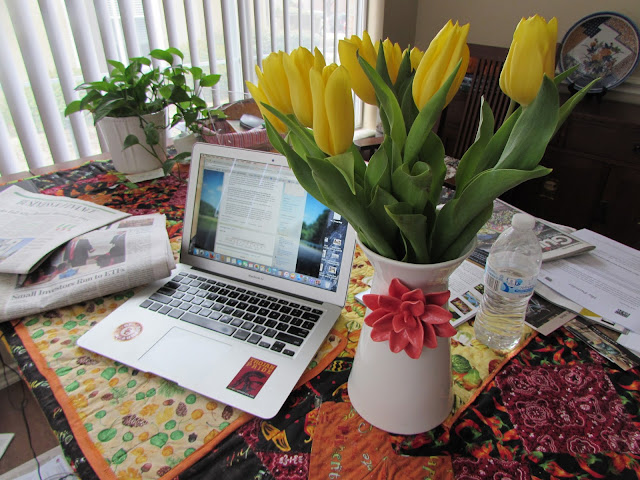 Posted by Bruce Oksol at 8:29 AM No comments:

My Bad! I Completely Misunderstood The Question -- March 4, 2017

At that post, go to the production profile and note the natural gas data: MCF production, MCF sold, and flared/vented.

The reader was curious what was happening to all the natural gas that was produced? None was reported as sold, and the amount flared was well less than the amount produced. I completely missed that.

I don't  have an explanation. I assume this is not the only case. Another thing to watch going forward.
Posted by Bruce Oksol at 8:26 AM No comments: