Twenty years ago if there had been a similar attack on Saudi Arabia, we would be talking about $200 oil.

Yesterday, after the attack, "we" were talking about $100 oil.

I talked to my wife who is out in California: at worse they expect gasoline to go up 25 cents/gallon. Anyone remember the OPEC embargo?

That's still not high enough to "save" Saudi Arabia.

It may not even be enough to save some US shale operators.

It's still well below what Harold Hamm thinks is a fair price for oil.

This is really amazing.

All because of the US shale revolution.

Had the Keystone XL pipeline not been killed by President Obama, the events in Saudi Arabia would have been even less concerning for the global oil market. But Obama knew better. What a doofus.

I recall a great movie of some years ago, The Manchurian Candidate or something like that.

I was away from the house all day (or better said, away from the 1,000-square-foot hovel we call an apartment all day) -- attending a water polo tournament involving our oldest granddaughter. On the drive home I checked the smart phone, googling "NASCAR today."

I turned on the television about 5:30 p.m. and got ready to watch the race. Volume was off. I saw someone singing the national anthem. I saw a crawler identifying someone as the race marshall.

I don't recall seeing the start of the race. I fell asleep. I woke up at 8:25 p.m. CT or thereabouts. The television set was still on.

Channel 31, NASCAR race, was frozen. I saw a still "photo" of three cars rounding a curve. But no movement. The screen was frozen. We get a thousand channels through Spectrum Cable. To the best of my knowledge, scrolling through the entire 1,000 stations -- some hyperbole, here, but not much -- I couldn't access three. One of the three out of the 1,000 stations: the NASCAR race.

One thousand channels, and of the three that are "knocked out," one of them is NASCAR.

Fortunately I was able to stream the event on my laptop just in time to see the winner, M. Truex, Jr., drive into the winner's circle.

I don't know what you will see when you go to this site: https://www.youtube.com/watch?v=WSW4bM-ia-4.

It may or may not show up. Hopefully what I'm seeing now will be there when you click on it.

And folks think that the Russians are influencing American elections. LOL.

This is going to be huge. All city government offices will be closed all day tomorrow. All schools are closed tomorrow. There are 3,000 parking spaces for the arena. Right now, authorities anticipate more than 8,500 attending. Do the math. Folks are already standing in line. Law enforcement support from across the state has been called in. Absolutely fascinating.

Whether or not this event is overshadowed by events in the Mideast is hard to say, but one can argue that the event will be even bigger with current geopolitical events. I would imagine the mainstream media is looking for a story that is bigger than this event and that would be the story in the Mideast.

Senator Tom Udall will retire at the end of his term (2020). This will end a dynasty in the west. -- NY Times. New Mexico is "in play" as they say, and that's why President Trump is visiting.

Rio Rancho is a "suburb" on the northwestern side of Albuquerque, NM. From wiki:


Rio Rancho is the largest city and economic hub of Sandoval County in New Mexico. A small portion of the city extends into northern Bernalillo County.

It is the third-largest and also one of the fastest expanding cities in New Mexico. As of the 2010 census, Rio Rancho had a population of 93,820.

Rio Rancho is part of the Albuquerque Metropolitan Statistical Area.

Original Post
Most fascinating: to see the price of gasoline at your neighborhood service station tomorrow
Mideast on the brink. Story tracked here. There are so many story lines:
Rahm Emanuel: "never let a crisis go to waste." Issues that should be affected by the attack on Saudi's oil terminals and oil field
Nominee for 2019 Geico Rock Award: IEA

Nominees For the 2019 Geico Rock Award

Second Runner-Up: Financial Times: US shale's rise means supply threats no longer have the same power to shock the market.

Nominees for the 2019 Geico Rock Award

A reader commented after reading the EIA prognostication at that post:


The US Energy Information Administration (EIA) claims that wind power can generate electricity for 8¢ per kilowatt-hour (kWh). However, this is based on poor assumptions and glossing over important realities.

It assumes average wind turbine lifetime is 30 years, the same as a conventional fossil fuel power plant. In reality, most turbines last only 15 years, and less offshore. It ignores the cost of backup power. It includes no cost for transmission lines from wind farms to distant cities. Most significantly, it omits subsidies.

A 2016 Utah State University study shows the following extra costs omitted or miscalculated by the EIA for wind power: 15-years not 30-year life expectancies (US 7¢ per kWh), backup power (at least 2.3¢ cents if the back-up is natural gas), transmission costs (2.7¢), government subsidies (23¢).

All that means the real cost of wind power is a staggering 43¢ per kilowatt hour! That’s seven times the cost of natural gas-generated electricity!

The Utah State University study will download as a pdf.

To the best of my knowledge, wind farms

Disclaimer: this is not an investment site. Do not make any investment, financial, career, travel, job, or relationship ....

.... break, break, I don't care what you say. I finally remembered the song that I couldn't recall.

First, this was the song I was listening to last night ...


One Headlight, The Wallflowers


My Love For Evermore, The Hilly Moon Explosion
... now back to where I was ...

.... decisions based on what you read here or think you may have read here.

Right now,I'm in a Goldilocks frame of mind. The market was flirting with new highs when we last left it last week. But oil and gas sector was dragging.

Now, today ... the Dow drops 115 points. A rounding error in the big scheme of things, but WTI? Up 12% or thereabouts. Happy days are here again.

Harold Hamm must be smiling. He would have lots to say about this.

Is Oilprice reporting anything? Nothing.

Saudi is going to see this and realize that, hey, cutting back production might be the answer. Well, duh?

Later: see first comment. A reader nominates the House of Saud for the 2019 Geico Rock Award.
Posted by Bruce Oksol at 5:50 PM 2 comments:


Conventional wisdom held that Ghawar has been producing 5 million barrels per day (BPD) of crude oil for decades. The prospectus notes that Ghawar has produced more than half of the Kingdom's cumulative oil production to date, but it reported that 2018 production was only 3.8 million BPD.

So, we can reasonably conclude that right now -- regardless of the reason -- the Permian Basin has overtaken Ghawar as the world's top oil-producer. That may not last if Saudi is constraining production in Ghawar, or if Permian production slows down anytime soon.

But it marks the first time in decades that Ghawar wasn't the top-producing oil field in the world.

What about Khurais oil field?

Well, what about it?

Random Update Regarding Top Stories For 2019

I've spent much of the day updating older wells. I was blown away by the production numbers that are being reported.

Every year I come up with the year's top stories, usually posting the list as soon after January first as I can.

I have that list "in draft" now. I wanted to add something to the list in one of the categories below after seeing new production numbers:

Most exciting small non-operator in the Bakken:

Most exciting micro operator in the Bakken:

Most exciting small operator in the Bakken:

Most exciting medium operator in the Bakken:

Most exciting large operator in the Bakken:

For three of the five categories, I have penciled in my choice; obviously those choices could change by the end of the year.

After looking at the Fort Berthold wells, I knew that Bruin needed to be considered for "most exciting small operator in the Bakken." I was amazed. I had already penciled in Bruin for that title.

For "most exciting large operator in the Bakken," that's going to be very, very tough. I think the edge still goes to MRO, but Hess' recent production numbers make that company worth considering; and, CLR's 60-well Long Creek Unit is certainly exciting.

It Will Be Interesting To See EIA Projections After Recent GeoPolitical Events In The Mideast When Some People Did Some Things -- September 15, 2019


Meanwhile, from just earlier this month:

It will be interesting to see how the recent geopolitical events in Saudi Arabia will affect these projections.
Posted by Bruce Oksol at 2:17 PM No comments:

If you have nothing else to do today, you might enjoy the update at this post. Newbies should definitely take a look.
Posted by Bruce Oksol at 2:09 PM No comments:

Comments for newbies:
Disclaimer: I am inappropriately exuberant about the Bakken.

Note: the Bakken never ceases to amaze me.

Note: in the old days, all of these wells would have been placed on "Record IP Page" but I generally don't do that, unless it's a "real, real" record. LOL. There are just too many Bakken wells that now qualify for "record IP" based on "old" criteria.

The six wells on that 6-well pad:

A few feet to the east:

Posted by Bruce Oksol at 1:48 PM No comments:

Regarding That Recent Talk That ND Operators Are Cutting Back On Production -- That Is Likely Accurate -- September 15, 2019

From The Williston Herald, this screenshot: 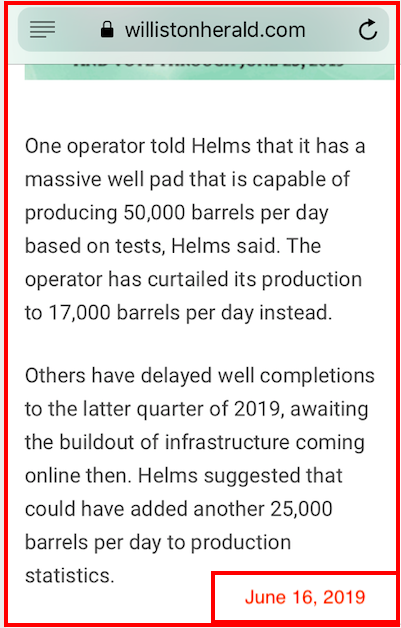 Assuming no error in the message or the reporting.

Note: CLR is not based in Denver, CO. Slawson and Whiting are.

For now, this is the entire list of EOG wells that had an IP test date in 2010 (the chart starts with a well with an IP in 2011 and goes into 2009). My database has every EOG permit and this particular chart is sorted based on the NDIC status date. This means that there could be EOG wells that have an IP date in 2008 that do not show up in this list. I have not completed the entire database for EOG.

This all started as an exercise for another reason.

Disclaimer: there will be typographical and factual errors in this spreadsheet. If this is important to you, go to the source.