The pipeline is full: US Colonial Pipeline line 34 fully allocated for first time in its history. Link here. Data points:
Stockton? Not again. See this post. Apparently the city learned how to spend other people's money -- even when it ran out. Doing it again: a “no strings” guaranteed basic income of $500 a month for its residents.

Interesting, tit-for-tat: China could buy more US coal to settle the trade imbalance. Consider the source. Overheard: China threatens to add a 25% tariff on soybeans; already a 3% tariff and a 13% value-added fee on soybeans (thus 16% "tariff" as President Trump pointed out). I think the new 25% tariff on soybeans would be directed against the US only.

Schultz is out at Starbucks. Eyes "public service." It's pretty obvious that he was also making a public announcement. Oh, by the way, Biden will run again for president. Hillary might as well jump in, assuming her back can take it. Bill is finding his stride, again: a #MeToo victim.

I just love this president. Right, wrong, indifferent -- this president doesn't kowtow to protocol or for political correctness. Disinvites the entire NFL Super Bowl team because some players can't find it in their hearts to respect the flag. Whatever. It sounds like the GSW won't be going to the White House either once the NBA championship is decided. [Later, 3:42 p.m. June 5, 2018: neither team will visit the White House, regardless of whom wins.]
Posted by Bruce Oksol at 3:56 PM No comments:

Bakken flooding: from The Williston Herald --

Missouri River levels continue to run high, with snow melt from Montana pushing its way down the Yellowstone, and the river is walking its way out of its banks in several locations. Farm fields have been flooded, and even a parked vehicle or two has been caught unaware by the rising water levels.

The river level Friday afternoon at the Lewis and Clark Bridge was 24.47 feet, and was expected to gradually climb to 25.1 feet by early next week. Flood stage is 22 feet.

The rise is mainly due to mountain snowpack in Montana, rather than rain, according to meteorologists. Todd Hamilton is with the National Weather Service in Bismarck.


Four new permits:
And that was all.
Posted by Bruce Oksol at 3:29 PM No comments:

T+500: President Trump says this is his 500th day in office, and rightfully suggests he has been the most "productive" president in modern history. Hard to argue with that.

Law: Wow, "you don't have to bake that cake if you don't want to." This seems incredibly common sense. It's amazing the US Supreme Court had to act on this. 7 - 2. But, there are still "larger" issues to address. That's fine.  Common sense plus a ruling of 7 - 2 really makes one wonder about the "legal thinking" of two of the justices. Imagine if I had walked into a bakery and asked for a cake with a request for an incredibly obscene graphic to be placed on it, and told the baker she had no choice: that she had to provide that incredibly obscene graphic.

Permian: I just happened to catch a few minutes of CNBC. Looks like operators in the Permian are taking a hit. This was another open-book test. Short-term, scary. Long-term, exciting. Another buying opportunity.

Disclaimer: this is not an investment site. Do not make any investment, financial, travel, relationship, or job decisions based on what you read here or think you may have read here.

Apple developers' conference: what has impressed me so far -- "group FaceTime." Up to 32 people can be on FaceTime event at same time. Teenagers are going to love this. One could easily apply this to daycare centers. Amazing. Up to 32 "tiles" -- one for each participant but 31 "tiles" miniaturize when the "talking icon" enlarges to fill much of the screen.  This is simply conference calling but knowing Apple it will be seamless -- no calling an operator to "link" everyone in. No calling ahead. Just simply calling in / clicking in and seamlessly becoming part of the 32-person group.
Posted by Bruce Oksol at 9:23 AM No comments:

The market -- oh, before I forget, the disclaimer: this is not an investment site. Do not make any investment, financial, job, travel, or relationship decisions based on anything you read here or think you may have read here.

Now, back to the market:
EV sales, May: the chart is not yet complete, for the month of May, but getting closer.  Check out Tesla deliveries.

SpaceX: speaking of Tesla, I read somewhere that SpaceX won't be launching space-tourists in 2019; original plans have been delayed. I assume the link is easy to find.

Valero: Mike Fitzsimmons has an update on Valero over at SeekingAlpha. Brent-to-WTI discount at $11. US refiners with excellent marine access to the Gulf of Mexico will be in the catbird seat. One of those is Valero, which has a current export capacity of 462,000 bpd.

Facebook: is "slow-rolling" one word, two words, or a hyphenated word? Just wondering.

Study linked over at the Drudge Report: too much bad news can make one sick. This explains the crude/foul language being used by late night talk shows. For the alt-left, there has been nothing but bad news for the past two years.

His movie: Bill Clinton insists he doesn't owe Monica Lewinsky an apology for hijacking her life by taking advantage of her while president – and says HE'S a victim because he left the White House deeply in debt. Speaking of bad news: Bill Clinton left the White House with Hillary. Now, that's a real downer. But since leaving the White House, Bill's fortunes have turned -- in 2017 it was estimated his net worth was $70 million. Hillary? From TownAndCountry magazine:


Since Clinton herself said she and her husband left the White House "dead broke," what they've made since then provides a good idea of their net worth today.

Wealth-X estimates Hillary Clinton's net worth to be at least $18 million, and her federal financial disclosure filing in 2015 showed that she had between $11.3 million and $52.7 million in the bank.

Not so bad considering she's said she and her husband were $12 million in debt at the end of his presidential administration in 2001.

Comment: And their only work as far as I know: speeches and books.

Melania: apparently Melania is "in hiding." I don't blame her. I hope she has the common sense to drop out of sight for five more years, at least. Will drive the pundits and paparazzi nuts.

Homeless shelter: in the homeless shelter, despite the heavy downpour of rain this morning, there are only six of us. On the other hand, the drive-through is non-stop and the app-ordering-walk-in-pick-up (AOWIPU) crowd is one heavy stream. In fact it almost looks like a rivulet of drug addicts. The bathrooms, for the most part, remain unoccupied.
Posted by Bruce Oksol at 9:13 AM No comments:

Consider the source, but if "accurate," this might be one of the better articles/analyses I've seen with regard to the Permian.

Long term one can argue this will all take care of itself, but for companies like Oasis who moved out of the Bakken to focus on the Permian must certainly raise some concerns -- with 20-20 hindsight.


The Wall Street Journal recently reported hat only five of the Top 20 U.S. oil companies focused mostly on hydraulic fracking generated more cash than they spent in the first quarter of this year. This continues a trend that has been ongoing throughout the fracking boom.

The WSJ article is here; I think I may have already linked it; don't remember.

Some data points from the linked oilprice.com article:
But, wow, take a look at this, things are obviously moving in the correct direction:

Disclaimer: this is not an investment site. Do not make any investment, financial, job, travel, or relationship decisions  based on anything you read here or think you may have read here.
Posted by Bruce Oksol at 8:26 AM No comments:

Brazil oil: could Brazilian oil go the way of Venezuela? Unlikely, but ...

Global warming --> climate change --> air pollution: this is pretty cool. Apparently this transition has been in the background for quite some time, but I had not noticed it until yesterday. I did not keep the link. We are all aware that when "global warming" hysteria was not working, the faux environmentalists morphed the scare to "climate change."  Now, the preferred term, apparently, is "air pollution." I was reminded of that when I was getting on my bike to ride to our local homeless shelter. All of a sudden, a huge clap of thunder and a huge downpour. I didn't check the weather forecast last night, but the day before there was nothing in the weather forecast to suggest any rain today. The forecast was a possibility of some rain east and southeast of here on Friday night and Saturday morning but by Sunday, back to hot weather and more of the same -- hot, sunny weather -- Monday (today). The rain was so heavy I had no option but to drive, and the rain was so heavy, there were moments when the windshield wipers couldn't keep up. The local weather forecasters did not know of this downpour two nights ago, but they know, with 100% certainty, that the earth will be 2 degrees warmer one hundred years from now. [Later: yes, as others join me in the homeless shelter, the opening greeting -- "Well, that was quite a surprise rain storm. And to think the earth is going to be 2 degrees warmer one hundred years from now."]

Star Trek: no what bothers me most this morning? The original Star Trek television series, to the best of my knowledge, never addressed global warming. How was that missed. Nor, apparently did 2001: A Space Odyssey or Planet of the Apes.

Let’s compare that to domestic solar and wind production which, since 2008, has increased by 4,800 percent and 450 percent, respectively. While those percentage increases are impressive, the total energy produced from those sources remains small when compared to oil and gas. In 2017, US solar production totaled about 77 terawatt-hours and wind production totaled about 254 terawatt-hours, for a combined total of 331 terawatt-hours. That’s the equivalent of about 1.5 million barrels of oil per day. Simple division (10.5 divided by 1.5) shows that since 2008, the increase in energy production from oil and gas is equal to seven times the energy output of all domestic solar and wind. 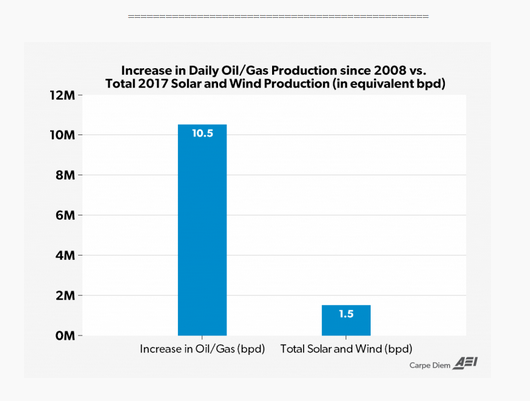