A reader pointed me to Advisor Perspectives.

This is a nice analysis of the ADP employment report today.

This is the graph with minimal markings. Spend some time looking at this graph while reading the linked article. 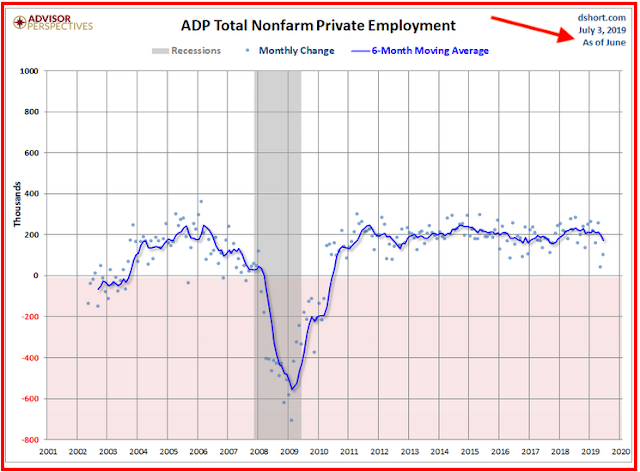 Two comments regarding that linked article.

This is based solely on the ADP employment report today and the comparison of this data with the data prior to and during the last recession.

The second observation, "why the market went up today," with the S&P 500 hitting a third consecutive record high:
Finally, the graphic with some additional markings: 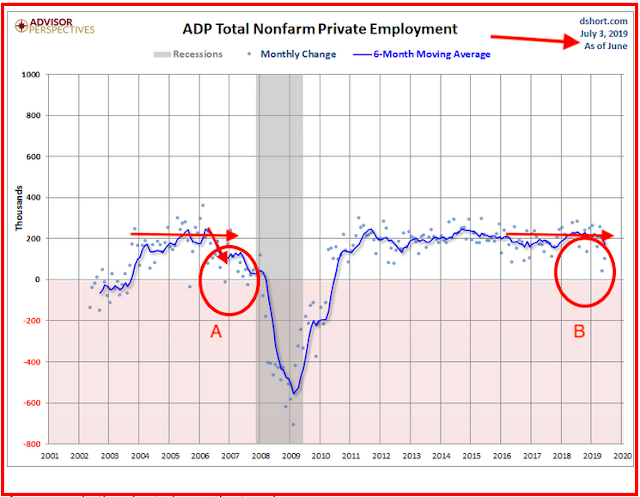 And I would comment on the additional markings, but it's late, and I'm heading to bed.
Posted by Bruce Oksol at 10:55 PM No comments:

I missed this earlier this week -- how did that happen? Oh, that's right. I'm on vacation, haven't been following the news. I assume ABC, CBS,  NBC, MSNBC, and, CNBC had this covered. 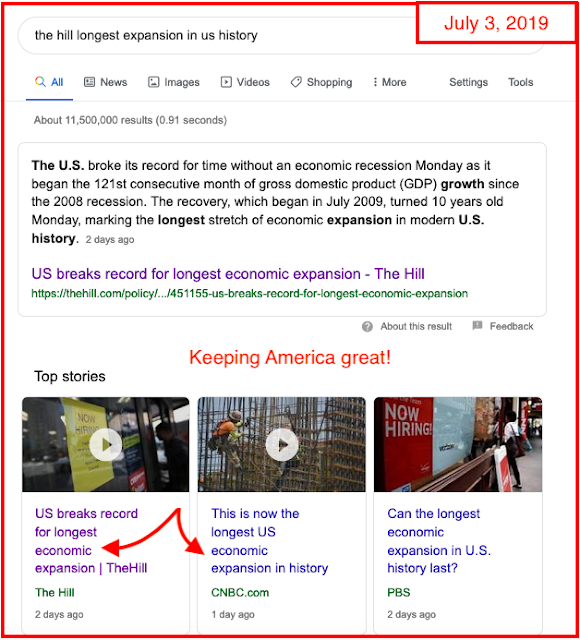 Airport Construction On Schedule But Adequate Cement Is An Issue -- July 3, 2019

On track to open October 10, 2019, but due to flooding, adequate cement for the new Williston airport is a challenge. Officials have alternate sources of cement but not without a lot of quick thinking/quick acting.


Officials at the Williston Basin International Airport are breathing a sigh of relief as a temporary solution for the facility’s ongoing cement shortage has been found.

The airport has been dealing with a lack of cement needed to complete projects at the site, most notably the runway and taxiway. Flooding in Missouri, where the supplier is located, has created a cement deficiency not just for Williston’s airport project, but for companies all across the upper Midwest.

Airport Director Anthony Dudas said the runway is a “critical timeline piece” to complete, as the paint markings and runway edge lighting must be completed before the FAA can do the required flight checks on it. 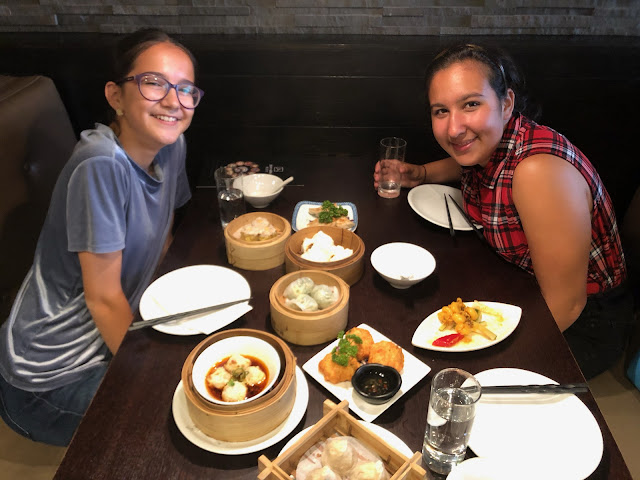 Link here. Data points:
Judson Township: first township west of Williston Township, either side of US 2; west of Judson is Round Prairie whose western border is the Montana state line.

From moneyrates, a PDF will load on your desktop. 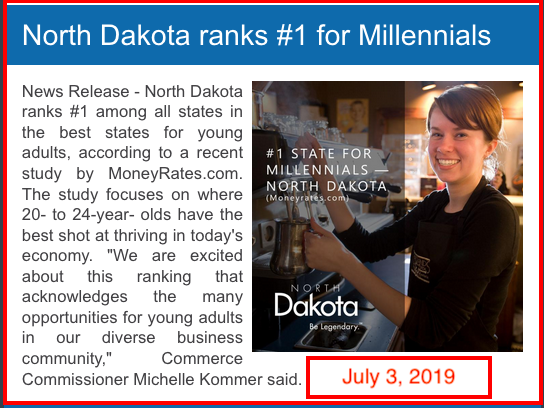 
I Can't Help Falling In Love With You, Arlo Guthrie
Posted by Bruce Oksol at 3:49 PM No comments:

Posted by Bruce Oksol at 9:17 AM No comments:


For the oilfield services industry, it’s no longer about merely navigating a downturn. It’s now about survival.

Five years after crude began its plunge to less than $30 a barrel from more than $100, the companies that drill and frack wells are living in a new world. The producers they work for have become increasingly efficient and cost-conscious, reacting to shareholder demands for payback and a crude market that’s recovered only part of that brutal decline.

Meanwhile, the service companies that handed out discounts in the downturn are barely holding on. Schlumberger Ltd. and Halliburton Co., the two biggest, have each fallen by more than 65% since crude started tumbling, and Weatherford International Plc on Monday filed for bankruptcy. Contrast that with the oil producers, collectively down less than 50%.

When crude began recovering in March 2016, the servicers started refortifying. But with their customers keeping a lid on spending, the gear began to pile up. In February, Rystad Energy, an industry consultant, estimated that supplies of U.S. fracking gear -- the pumps that blast water, sand and chemicals underground to release crude in what has become the most expensive part of drilling -- will exceed demand by about 68% by year’s end.

At the same time, producers have enjoyed an output boom in recent years, doing more with less by using new methods and technology. Shortened horizontal drilling times and longer laterals that require fewer wells to be drilled are taking a toll on servicers.

Pretty much says it all. 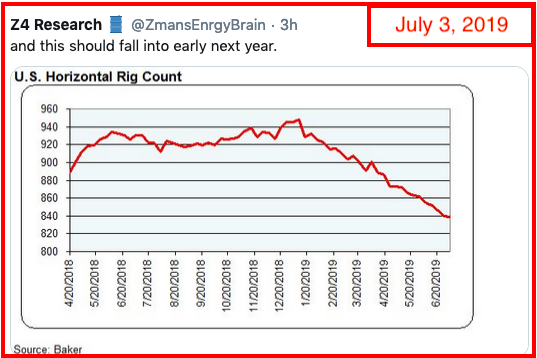 Six-year-old in front. Five-year-old (birthday earlier this week) in back. Flathead Lake, Montana.

Wells coming off the confidential list today -- Wednesday, July 3, 2019: 4 for the month; 4 for the quarter;
Active rigs:


For a few years now, Buckeye Partners’ plan to revise the current east-to-west refined products flow on its Laurel Pipeline across Pennsylvania has pitted Midwest refiners against their Philadelphia-area brethren — and gasoline and diesel marketers in western Pennsylvania. Each side has good arguments. Midwest refiners note that westbound volumes on Laurel have been declining through the 2010s, and assert that making the western part of the pipeline bidirectional would result in higher utilization of the line and enhance competition in central Pennsylvania, Maryland and eastern West Virginia. Pittsburgh-area marketers counter with the view that allowing refined products to flow east on a portion of Laurel would hurt competition in Pirates/Steelers/Penguins Country, while Philly refiners — their ranks now thinned by the planned closure of the fire-damaged Philadelphia Energy Solutions (PES) facility — say Buckeye’s plan would further threaten their economic viability. Amid all this, might there be a “perfect-world” solution? Today, we provide an update on this still-in-limbo project and discuss a few possible paths forward.

The well (from above):
The graphic: 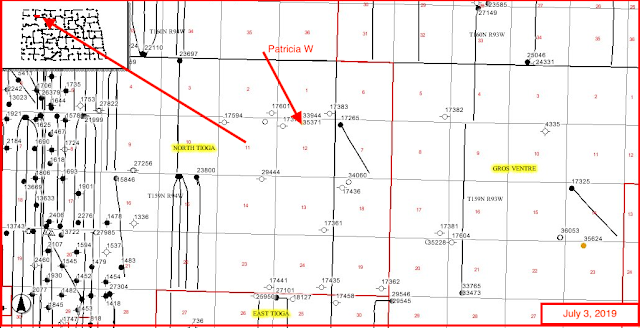