Thirteen (13) producing wells completed:
Charbonneau oil field is a small oil field in far west McKenzie County, near the river. I would not have considered this as particularly great spot. The heat map suggests this may be a very small circumscribed "hot spot."

“Last year, the Great Lakes were 21.2 percent ice-covered on Jan. 14, making this year’s ice cover 13 percent higher to date. If you recall, below-average temperatures were persistent from mid-January onward in the winter of 2014, leading to the second highest ice coverage on record at 92.2 percent on March 6, 2014.”

If I recall from my days growing up in North Dakota, there was a polar plunge every year about this time. We called it "winter" back then, but apparently for the warmists cold weather is out of the ordinary, and thus, a "polar plunge" is how it is described.

For the warmists, there will be but one season: warm to hot, with an occasional polar plunge.

For the rest of us: spring, summer, autumn, winter.

Number-challenged: Reuters is reporting --  that the person responsible for double-counting ObamaCare enrollees is ... resigning -- one reader suggests she will be moving over to the government's Bureau of Labor Statistics where she will become an intern majoring in "How To Manipulate Numbers In The Modern State."

U.S. consumer prices post biggest drop in six years. I see Starbucks has dropped their prices 50%; airlines are giving their unsold seats away to first come first get; gasoline is down to $1.99/gallon; and the local grocery store is giving away a free duck for every chicken sold. Okay, one of those four items is accurate. Everything else was made up. Link to story here. They still talk about improving labor market: I don't see it. The only thing "improving" is the unemployment rate but that's smoke and mirrors; the rate is dropping as labor participation drops. Wages are not keeping up; and a lot of folks are now having their hours trimmed due to ObamaCare.


RBN Energy: normalizing relations with Cuba and the oil industry in the Gulf.


By virtue of their less vulnerability to low commodity prices, the midstream properties of Williams help it to maintain a steady stream of revenues and cash flow.

Furthermore, Williams is poised to benefit from the rebound in industrial activity, which would include increased natural gas demand in the form of natural gas liquids. Williams also has a strong commitment to enhance shareholder value. This is evident from the company’s fourth-quarter 2014 dividend payout of 57 cents per share, which was 50% higher than the year-ago quarter. Moreover, the company’s dividend for 2014 is $1.96 per share, up 36% from $1.44 paid out in 2013. [And if one has automatic dividend reinvestment, one is buying shares on sale during any stock market slump.]

Last year, Williams completed the purchase of the remaining 50% GP interest and 55.1 million LP units in Access Midstream Partners LP – thereby having full GP ownership and 50% LP interest in the Oklahoma City-based partnership. We believe that with the acquisition, Williams has significantly improved its transportation and midstream businesses as Access Midstream holds a strong portfolio of natural gas pipelines and gathering assets in the Marcellus, Barnett, Utica, Haynesville, Eagle Ford, Mid-continent and Niobrara shale regions.

However, we remain concerned about Williams’ high debt levels, which make it vulnerable to an extended drop in commodity prices. As of Sep 30, 2014, the company had long-term debt of almost $20 billion, representing a debt-to-capitalization ratio of 69.6%.

I guess you have to spend money to make money, even if the money you are spending is not yours.

Speaking of spending money that is not yours, Illinois is a perfect example:


For Illinois the cost of debt service in fiscal year 2015 is nearly $4 billion on outstanding bond debt of nearly $32 billion. The debt service amounts to more than 11 percent of the state’s anticipated revenues for the fiscal year – 11 percent that can’t be used for essential programs.

This debt problem in Illinois has snowballed since fiscal year 2002. Before then, outstanding debt had never exceeded $10 billion, annual debt service had always been less than $1 billion and debt service amounted to less than 5 percent of the state’s general revenues.

I can't get my hands around big numbers, but $32 billion seems like a lot more than $10 billion. The best way to manage this debt is to simply roll it over, borrow some more to pay the annual interest, and let the next generation deal with it. At least that's what they do in South America and Greece.


********************************
Apple
From Forbes -- see Disclaimer:
Yesterday, while standing in line at Target, the person ahead of me paid for her purchase using an app on her smart phone. It was not ApplePay; the cashier scanned the bar code on the customer's smart phone. But it was fast, and I bet very, very secure. Possibly CurrentC.

More at my "reading (literature) blog."

I know as much about film history as I do about the Bakken -- that is, not much. In 2007 I started the milliondollarway blog simply to better understand the Bakken.

Since retirement in 2007, I have become more and more interested in movies; regular readers know that DVDs are my biggest form of relaxation. As with reading, I go through phases with regard to movies, and now re-runs of television series.

That is all preamble for the opportunity to mention a wonderful book I stumbled across while shopping in a Japanese bookstore in Los Angeles a few weeks ago. As mentioned previously, 90% of the offerings were in Japanese, but the English-book section was outstanding. I picked up a "Manga" book on electricity, and a graphic novel on Steve Jobs. But the best buy was the 2008 Los Angeles Before Hollywood by Jan Olsson. I enjoy it mostly because it is a most challenging book to read; very, very dense; somewhat obtuse writing, I guess, one would say. I have started the book several times, and have had to read the first two or three pages three or four times to figure out what the author's intent for the book was. I have now gotten through the introduction after the fourth or fifth try, and for the first time, finally looked at the author's bio on wikipedia. It looks like it's a much better book than I had even imagined.

I don't recommend the book for anyone but the most diehard movie historians. It has real heft, again literally and figuratively. It looks compact but it is "heavy." It has ten chapters (plus an introduction), 394 pages; notes, 50 pages; a 14-page bibliography; and a 19-page index.

The book covers the history of film in Los Angeles and the West Coast from 1905 to 1915, a period the author considers a transitional period for film. Two films serve as symbolic bookends for this decade: Escape From Sing Sing (1905) and The Clansman, later The Birth of a Nation (1915). I recall seeing the latter many years ago, but I forget where and exactly when -- but it must have been back in high school, if you can imagine that. It left a huge impression on me.

I doubt I will finish the book any time soon. I may not finish it at. Certainly, I will skim some portions of is. It is interesting, rewarding, and fulfilling to see my alma mater, University of Southern California mentioned often.


The early 1910s was a period when social scientists and progressive reformers began mapping the amusement and recreational geographies in America. In the spring of 1911 renowned social scientist Dr Emory S Bogardus was summoned to Los Angeles at the behest of the University of Southern California's president.

The mission: establishing a department of sociology at USC. The result: a highly regarded and in several respects groundbreaking academic institution crafted during Bogardus' long tenure at the helm.

According to a small news item from December, 1911, Dr Bogardus, during his first year as a professor at USC, had thirty-five students in a civic-education course prepare to maps of downtown Los Angels marking all its places of amusement and recreations based on a systematic inventory of 3,600 blocks.

That reminds me of my introduction to "real" biology when Mr Monson, my high school sophomore biology instructor told us to go outside, "map" off one square foot of turf and systematically go through every square inch of that square foot to describe every specimen of flora and fauna found.

These days when walking home from school with one or both of the granddaughters, I will stop, have them get on the ground with me, and look very closely at all the living organisms under our feet.

[I wanted to be sure I had spelled "Monson" correctly and in the process learned that Mr Kristian Monson was named teacher of the year, for the state of North Dakota, for the year I graduated from high school, 1969. Wow.]

January 19, 2015: This was my original post on global warming for this post, see below, but now the update: egg on their collective faces.

From this site, the first data point:

Surpassing the previous record by 0.07 degrees F. Seven-hundredths of a degree in ocean temperatures. Is that even statistically meaningfully? Is it even repeatable? Where did they get all these incredibly precise -- down to hundredths of a degree -- thermometers all the way back to 1880 and where did they find the merchant mariners to take all these temperatures around the world.

When you click on the graph at the link above be sure to look closely at the x-axis and the y-axis.

Second, the y-axis: the earth is what, about 4.5 billion years old? The y-axis is all of what, about 140 years? It would be interesting to look at the ocean temperature when the dinosaurs and small mammals were thriving, about 100 million years ago. Something tells me it was a lot lot warmer then, but then, what do I know.

And what do we get? 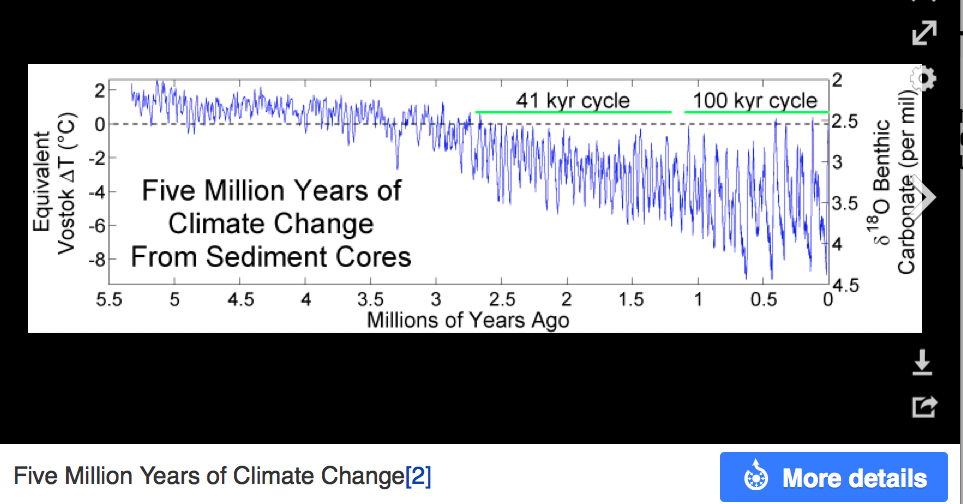 Disclaimer: the graph above may be upside down. LOL.
Posted by Bruce Oksol at 8:09 AM No comments: