A Closer Look At The Two New Whiting Permits From Today's Daily Activity Report -- An NDIC Typographical Error? Or Am I Missing Something? -- November 29, 2021

NDIC places two new Whiting permits in the Parshall oil field in today's daily activity report, but I think the two new permits are for wells that will be in the Sanish oil field. 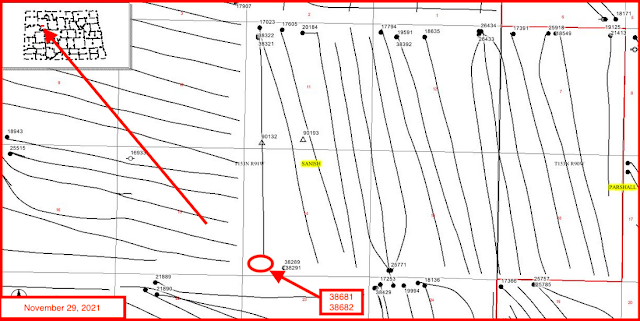 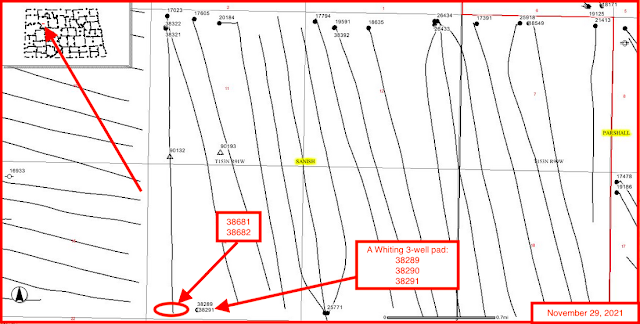 Permits for a three-well pad in the same general area as the sites for the two wells suggested in today's permits:

Posted by Bruce Oksol at 7:02 PM No comments:

So the three fewer today than Friday easily explained:

A Zavanna Well's Production Jumps 6-Fold After Coming Back On Line -- November 29, 2021

Recent production: 9,675 bbls over 21 days extrapolates to 14K over 31 days, a 6-fold jump in production after coming back on line. Did not last long..

In a long note like this, there will be typographical errors and content errors. If this information is important to you, go to the source.

For newbies: I am inappropriately exuberant about the Bakken.

Suggesting something is going on.

And here it is: three pads / four pads, north to south and lots of new activity:

Victor Davis Hanson Joins The "Woke" Crowd; Yorkshire Inn Gets Snowed In; The NFL Is Back -- Nothing About The Bakken -- November 29, 2021

The word for the day: abatis.

I mentioned earlier I was in my US Civil War / US Grant phase. See this post. My notes on US Grant are in progress at this post.

It was in James Marshall-Cornall's biography that I came across the word abatis, along with glacis. The latter, glacis, has nothing in common with glassy as far as etymology is concerned, but there is a sort of family resemblance. LOL.

I wasn't going to post this except that it bothers me that it appears that Victor Davis Hanson has joined the "woke" crowd. I've haven't read any of his stuff in a long time -- perhaps the last time I paid much attention to him was pre-Covid when I would sit for hours at Starbucks. But since then, not much interest. It was pure serendipity that his article appeared in the most recent issue of The Claremont Review of Books when I was reading about US Grant and putting that story together.

It all began with my short -- very short -- visit to Shiloh, TN, last month, a truly life-altering event for me.

Internet sources suggest "the Shiloh battlefield" was 5.8 miles square and/or 9,324 acres. The numbers don't work; different sources, but be that as it may, prior to the battle Grant was anticipating as many as 100,000 Union soldiers (James Marshall-Cornall), although fewer than that actually fought. A smaller but similar number of Confederates were expected; about 45,000.

It is impossible to imagine that many men (and hangers on) in an area that would be about six sections in size. And then the logistics: the food required to feed this army; the liquor required; and, finally, the number of port-a-potties that would have been required. Many arrived by steamer coming down the Tennessee ... just the disembarking of tens of thousands of troops would have been mind-boggling.

I wouldn't have bothered with posting this story but I have such fond memories of Yorkshire, how could I not post this for the archives for my grandchildren.

If I had all the money in the world, I would have a house in Yorkshire.

Here's the headline: snowstorm strands 61 in pub in Yorkshire, England, for third night, plenty of beer available. You will have to google the story. Google blogger app blocks this site from being linked.

So, now, the map. I was stationed for many months at RAF Menwith Hill, northern Yorkshire, and I often spent weekends walking in the Yorkshire Dales.

The map, and there it is:

Tan Hill is a high point on the Pennine Way in the Richmondshire district of North Yorkshire, England. It lies north of Keld in the civil parish of Muker, near the borders of County Durham and Cumbria, and close to the northern boundary of the Yorkshire Dales National Park. It is in an isolated location, the nearest town of Kirkby Stephen being an 11-mile drive away.

The Tan Hill Inn is the highest inn in the British Isles at 1,732 feet above sea level.

Several months (?) ago I mentioned on the blog how brilliant Amazon was to "steal" the rights to Thursday Night Football from Fox Sports. So, how did that work out. Here are the headlines, from The TV Ratings Guide:

And then this, from SportsNaut:

We'll quit there but that tells me everything I need to know. The parent well, because these wells are still confidential, not sure which way they run, but it appears they run to the north ((?). If so, the one well in that drilling unit is #20266. Again, this is all conjecture. The nearest wells are one mile to the west, Equinor wells, and there are subtle hints there, but I can't say anything for sure.

Regular gasoline at our corner service station over the weekend: $2.89 / gallon.

Determining whether to approve plans for interstate natural gas pipeline projects has never been an easy task for the Federal Energy Regulatory Commission. There are so many things to consider, chief among them the need for the pipeline, impacts on the environment and landowners along the route, and what it all means for gas customers. But as complicated as the decision-making process may be, at least pipeline developers, gas producers, and customers knew that once a new pipeline was approved by FERC, permitted, built, and put into service that the matter was closed — that is, the pipeline was here to stay.

Now, in the wake of a groundbreaking court ruling on a new gas pipeline near St. Louis, things are not so certain. As it turns out, we’re intimately familiar with the matter, having just made the case that the 65-mile Spire STL Pipeline is an important addition to the regional pipeline network that provides supply diversity, improved reliability, and access to lower-cost gas. In today’s RBN blog, we consider the evolution of FERC regulation of gas pipelines and the new uncertainty that all affected parties face.

Decades ago, back when natural gas pipelines themselves bought and controlled most of the supply in the gas market, the process for certifying new pipelines was especially complicated and arduous. In essence, the pipeline company needed to prove to FERC beyond the shadow of a doubt not only that the proposed pipeline was really needed by real, provable demand, but that there was sufficient gas supply at the upstream end of the pipe to serve customers through the project’s lifecycle.

Typically, that high bar was met via what you might call a package deal under which gas producers made long-term commitments to supply gas (and show that they had sufficient reserves of gas in place), pipeline companies contracted to buy and transport the gas, and local distribution companies (LDCs) committed to buy the gas from the pipeline. The pipeline’s bundled rates included charges for the gas itself and a range of services: transportation, storage, and peak shaving. Everything was locked down.

It said that gas pipelines would only transport and store gas, not buy and sell it, and that shippers would essentially rent space on pipelines between two or more points.

Where gas came from and where it went was no longer the pipeline’s business — the new buzzwords were “open access” and “unbundled.”

To give structure to how new facilities are reviewed in the post-Order 636 world, after some experience in the unbundled market, FERC in 1999 issued a statement of policy laying out the hurdles that need to be cleared to get project approval.

One such hurdle was a requirement for firm precedent agreements on the project (commitments to sign firm service contracts when the project goes into service) to demonstrate customer demand and the need for capacity. In addition, many other standards were incorporated in the process having to do with the impact on other customers of the same pipeline, on competitors, on landowners, etc. (Pipelines already had to clear the very high hurdle of an environmental analysis under the National Environmental Policy Act, through either an environmental assessment or an environmental impact statement if it was warranted.) Notwithstanding these standards in the policy statement, reliance on precedent agreements became the primary test of need in most cases.

The Shale Revolution gave a new urgency to getting new gas pipelines (and pipeline reversals and expansions) approved and built. Production in the Marcellus, Permian, and other shale plays was taking off and producers needed to add capacity fast to keep pace. Getting approvals for supply-push pipeline reversal projects was relatively easy in that they typically had little or no environmental impact, but some greenfield pipelines (especially in the enviro-conscious Northeast) proved tougher to advance, and some didn’t make it past the finish line. Also, there was growing resistance (and not just in the Northeast) from landowners and communities about the eminent domain rights that come with a FERC certificate. (Eminent domain is the power for an entity to take private property from another entity for a valid public purpose.) The transfer of federal eminent domain to a private pipeline developer was added to the Natural Gas Act by Congress in 1947, making the issuance of a certificate to construct a much bigger deal than it had been.

Since 2018, FERC has been exploring possible changes to the 1999 policy statement on the certification of new interstate pipelines. Among other things, FERC has been examining the role of precedent agreements and landholder interests in the decision whether to grant a certificate that includes eminent domain; the commission’s evaluation of project alternatives; and — most recently, in a draft Notice of Inquiry (NOI) filed in February 2021 — the impacts of proposed projects on greenhouse gas emissions and “environmental justice communities.” Those matters will be discussed and decided over time.

The rest of the story at the link.

My Condolences To Those Charging Their Chevrolet Bolts Tonight In New England -- 1:28 A.M. Eastern Time -- November 29, 2021

The ten deciles in ISO NE are not linear. As one goes up the scale, the range increases markedly. By the time we get to the 7th decile, price-spreads are remarkable, to say the least:

Later, 6:30 a.m. CT: the original post was just after midnight, earlier "this morning." It's gotten worse. All of New England, with minor exceptions has now moved to "orange," the 7th decile (it may have been higher overnight), with electricity trending toward $175 after spiking to $125 / MWh around 2:00 a.m. It didn't stay there long but since 4:00 a.m. it's been going back up and is now around $175 / MWh. Note "renewable" contribution. It's gonna be a long winter. 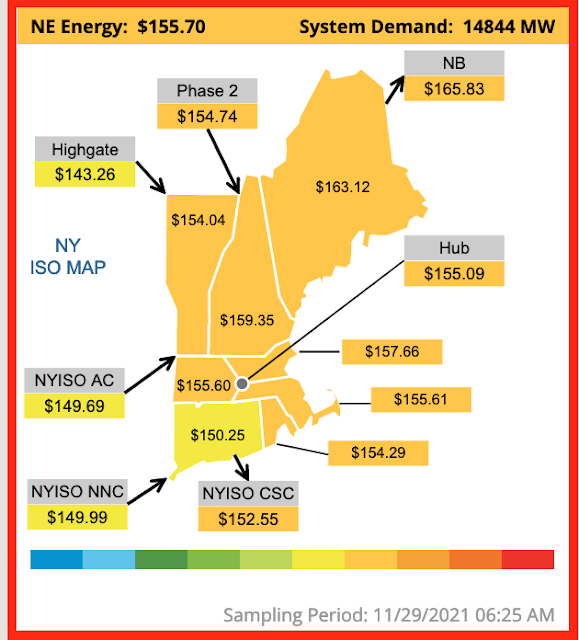 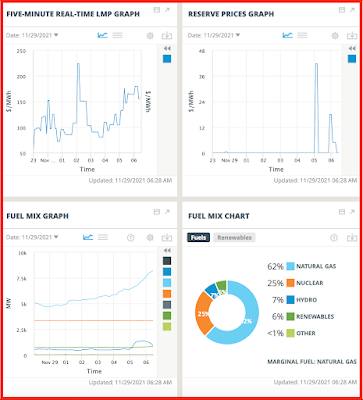 Price of electricity in the "yellow' -- at the 6th decile. 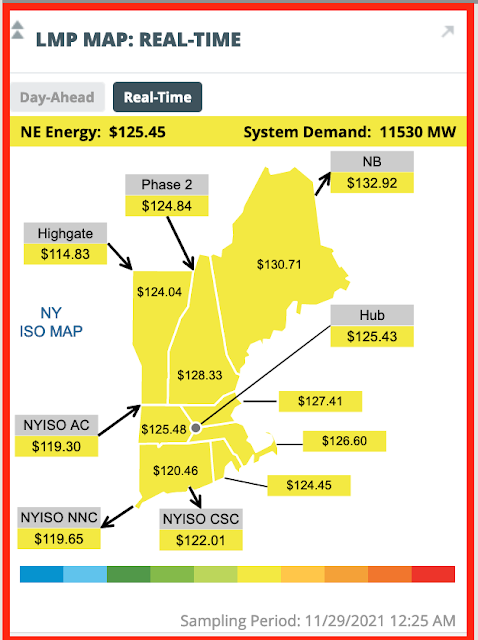 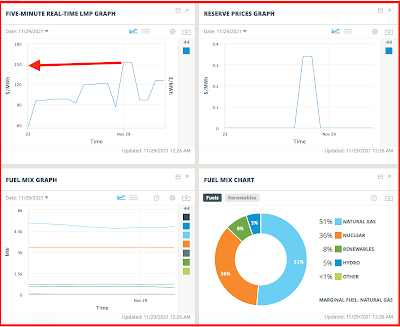 With renewable energy, it should be running close to "free," we were told.