An iconic scene from Twin Peaks, it is happening again, "The World Spins":

Venezuela crude oil imports drop below 20 million bbls / month for the first time in several years. If one assumes the three other times that Venezuela imports dropped below 20 million bbls (in one month) were anomalies, then this might be a big deal. I don't know. One data point does not prove a point but for anyone following the Venezuela story, this has to be more than a trivial observation. Source. See what peakoilbarrel has to say about Venezuela; not a pretty picture. 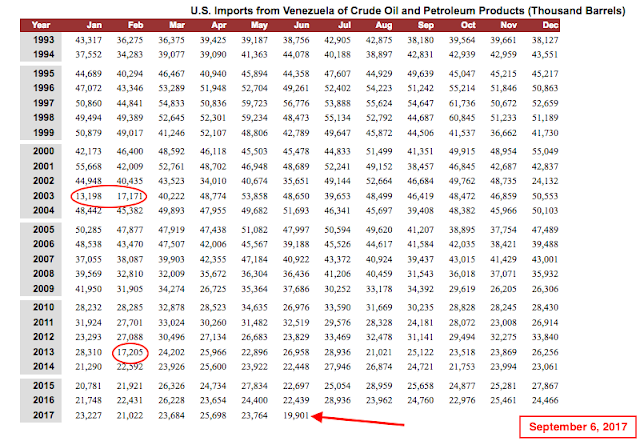 And then, of course, there's Saudi Arabia: 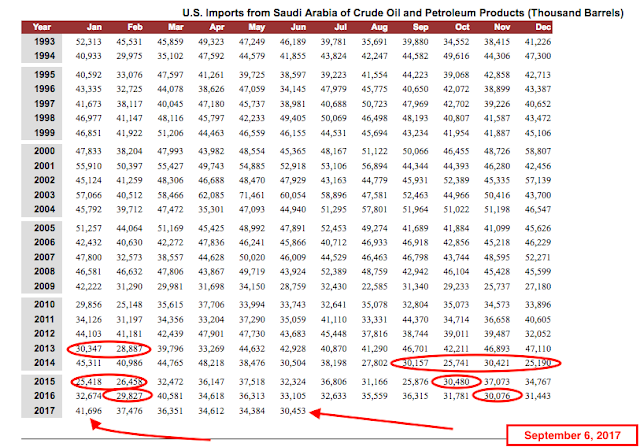 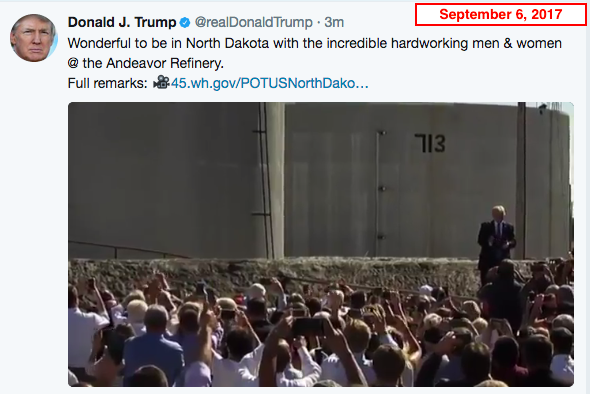 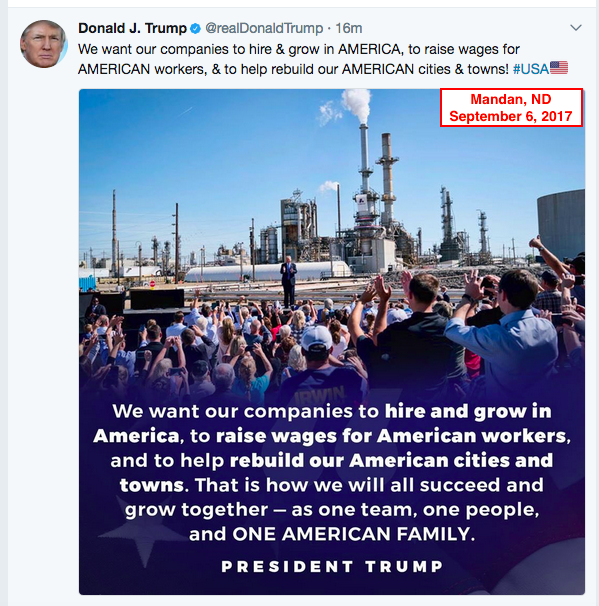 
Tallgrass Energy will allow up to 600,000 bl of committed volume in September on the Pony Express pipeline to be stored in the short term as "working inventory" amid uncertainty of oil markets in the aftermath of Hurricane Harvey.
Up to 200,000 bl of Bakken, 300,000 bl of Niobrara and 100,000 bl of Mixed Sweet (MXS) previously scheduled for delivery to Cushing, Oklahoma, in September can be shipped to the Deeprock South terminal for return in October.

More information on Deeprock here.
Posted by Bruce Oksol at 6:26 PM No comments:

Posted by Bruce Oksol at 6:11 PM No comments:


From The Los Angeles Times:


Over seven years, the state of California has spent $449 million on consumer rebates to boost sales of zero-emission vehicles.

So far, the subsidies haven’t moved the needle much. In 2016, of the just over 2 million cars sold in the state, only 75,000 were pure-electric and plug-in hybrid cars. To date, out of 26 million cars and light trucks registered in California, just 315,000 are electric or plug-in hybrids.

The California Legislature is pushing forward a bill that would double down on the rebate program. Sextuple down, in fact.

That’s the essence of the plan that could lift state rebates from $2,500 to $10,000 or more for a compact electric car, making, for example, a Chevrolet Bolt EV electric car cost the same as a gasoline-driven Honda Civic.

Outside observers and analysts raise eyebrows at the $3-billion budget line. Supporters say the money will come mainly from the state’s cap-and-trade auction revenue, although they are vague on details.

I say "go for it." The Danes learned the hard way that rebates on EVs were a really, really dumb idea.

Apparently, California lawmakers have voted AGAINST this. The story is not getting widespread attention. The link is here.


The late Friday move came after criticism that the bill was short on details and failed to demonstrate exactly where the money would come from to pay for it.

The state Finance Department had opposed a previous version of the bill because it appropriated billions of dollars "without identifying a funding source."

Samsung is one of the only companies able to reliably mass produce OLED displays suitable for Apple's smartphone needs, giving Samsung a monopoly over OLED panel display and allowing the South Korean company to charge high prices.

[An analyst suggests that the] OLED iPhone panel supply is "controlled wholly by Samsung," with Samsung likely charging Apple $120 to $130 per OLED panel module, which is approximately $75 more than the 5.5-inch LCD module price of $45 to $55 for "Plus" sized iPhones.

The high price Apple is currently shelling out for OLED displays explain in part why we're hearing rumors suggesting pricing on the upcoming OLED-equipped "iPhone 8" could start at somewhere right around $1,000 for the entry-level model. Along with an OLED panel, it also uses 3D sensor camera components for facial recognition and many other advanced components that could also add a premium to the price.

From The WSJ today: Goldman Sachs Group Chairman Lloyd Blankfein on Wednesday sounded a warning about the markets, saying that some of what he sees “unnerves” him.


Mr. Blankfein said the current market environment “doesn’t feel like tulip-bulb-mania,” a reference to the famous speculative bubble in the Netherlands in 1637, but was nonetheless concerning.

“Things have been going up for too long,” he told attendees at a Handelsblatt business conference in Frankfurt. “When yields on corporate bonds are lower than dividends on stocks? That unnerves me.”

With regard to dividend yields, as far as I know, there are only two ways to lower the yield. But, then again, maybe I'm missing something.
Posted by Bruce Oksol at 12:19 PM No comments:

Note: there is much more to this article than what first meets the eye (as they say). There are some interesting points that Mike mentions without further elaboration. It's been a long time since Mike has had an article specifically devoted to the North Dakota Bakken. Archived.

An article from Mike Filloon that I've been anticipating, over at SeekingAlpha. Summary:
From the article:


The Bakken was one of the first plays to be developed in the US. It has been the focus of unconventional production, but has fallen out of favor. First the Eagle Ford then the Permian have both provided better economics. Newer plays like the STACK/SCOOP have emerged.

All have seen additional CAPEX, with dollars leaving the state of North Dakota. This has been seen by players like Continental. The Bakken is well suited for a well design analysis. It has seen more development than any other play, and this provides a longer term history.

The Bakken provides an excellent sample of well design. It shows why oil prices have not recovered, and why US production continues to increase at $50/bbl.

North Dakota Bakken well completions:
The average location in this grouping has or will produce 208 KBO in the first 19 months of well life. We used a D&C of $6 million and $10/bbl in costs. The average well reaches payback within this time frame at $50 oil and $3 natural gas. 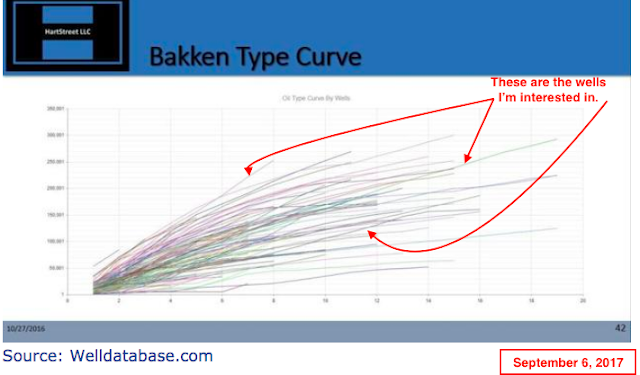 Now I'm waiting for Mike to discuss the peculiarities of the Bakken, i.e., the reversal of the dreaded decline rate.
Posted by Bruce Oksol at 10:12 AM No comments:

Quick: without looking, which president signed an executive order implementing DACA?
Posted by Bruce Oksol at 9:18 AM No comments:

Typos: I will correct several typos on earlier posts later. They are simply minor typos; I normally correct typos overnight as I find them but I got caught up in watching YouTube music videos and never got around to business. Whatever.

Syria: mainstream media not covering much of the war against ISIS in the mideast but it certainly seems things have changed in the last six months. I follow these events here. 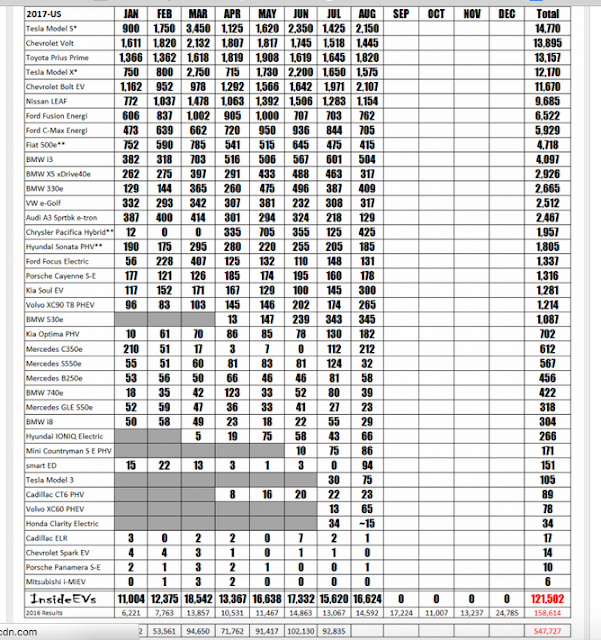 Nissan Leaf to compete directly with Tesla Model 3. From The WSJ


Nissan said the car would go on sale in Japan on Oct. 2 and in the U.S. and Europe in January. When it goes on sale in the U.S. the vehicle will start at $29,990, slightly less expensive than the current Leaf.

With bulked-up battery power, the Leaf will go 150 miles on a single charge, according to the company, up from 107 miles in the previous version. It also plans to introduce a version in the next year with a range of more than 300 miles. 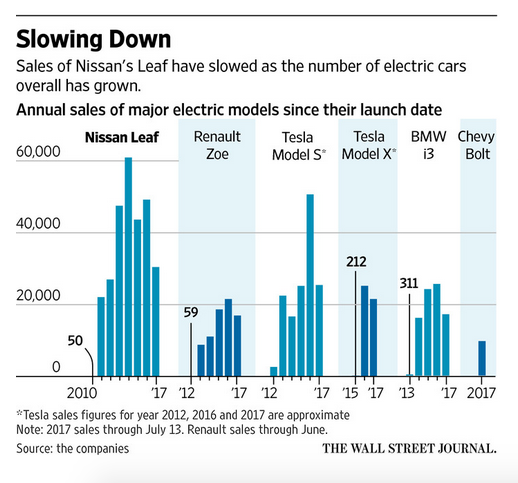 Along with the Nissan Leaf article, The WSJ re-posted this story: the problem with electric cars? Not enough chargers. To hit its sales targets, Tesla has to sell 430,000 cars by the end of 2018 and 10,000 a week after that—but where are they all going to plug in? The other problem, of course, stopping every 150 miles on a cross-country trip to re-charge for 30 minutes -- waiting in line for an hour or more. Just saying.
Posted by Bruce Oksol at 8:50 AM No comments: