September 29, 2017: Iraqi forces close in on Islamic State stronghold. Iraqi forces started an assault on the city of Hawija in a dawn offensive on Friday, part of their effort to rout Islamic State militants from their two remaining strongholds in the country. Iraqi forces have already retaken more than 100 villages on the approach to Hawija, which lies in the northern province of Kirkuk, after launching a campaign for the city last week. Friday’s offensive marks the second phase of the operation.
Islamic State’s only other major stronghold in the country is in the western province of Anbar, where Iraqi forces recently began an operation to drive the militants out of desert terrain near the border with Syria.

September 17, 2017: Iraqi Forces drive out Islamic State from town near Syria border. Recapture of Akashat helps secure newly reopened border crossing with Jordan. Iraqi forces drove Islamic State militants from an area in the western desert near the borders with Syria and Jordan on Saturday, making further inroads into the group’s last remaining territory in the country. Iraqi commanders said security forces and allied paramilitaries had faced little resistance from the militants in Akashat, attributing that to the extremist group’s low morale after two major defeats in recent months including the loss of its stronghold Mosul.

September 7, 2017: ISIS defeated in Syria. President Bashar al-Assad has advantage; next up to bat -- the US-led Kurds.

September 6, 2017: from The WSJ, Syrian Army makes major advance on city under Islamic State siege. The Syrian regime deals extremist group a setback in one of its most important remaining strongholds.


The Syrian army broke a three-year Islamic State siege in the eastern city of Deir Ezzour on Tuesday, handing the extremist group a significant setback in one of its most important remaining strongholds.

The regime’s advance adds to the pressure on Islamic State fighters in surrounding Deir Ezzour province, which many of the group’s leaders fled to as it came under attack and lost territory across Syria and Iraq over the past year.

The Syrian military has been moving toward the city of Deir Ezzour for weeks. The U.S. and Russia, Syria’s main ally, agreed recently on a plan to avoid clashes between the regime and the U.S.-led coalition fighting Islamic State, which is currently battling the extremists in the neighboring province of Raqqa to the north.

September 3, 2017: US-backed Kurdish-led Syrian Democratic Forces have taken about 60% of the city of Raqqa. One reader is waiting to see if Paul Ryan will criticize President Trump for this.


Iraqi forces have driven Islamic State from the symbolic town of Tal Afar, the Iraqi military said Sunday, clearing one of the extremist group’s few remaining strongholds in the country.

Operations continued against the militants in a handful of surrounding villages, a military statement said. Army officials said Saturday night that they were nearly in full control of Tal Afar’s historic center, moving toward the northern neighborhoods still held by Islamic State.

The surprisingly swift conclusion comes just one week into the battle for Tal Afar, which once served as a way station between the group’s de facto capitals Mosul in Iraq and Raqqa in Syria.

As U.S.-backed Iraqi forces penetrated Tal Afar, it became clear that Islamic State fighters either had abandoned the city ahead of the battle to seek refuge elsewhere, or had lay down their weapons to blend in with the local population. 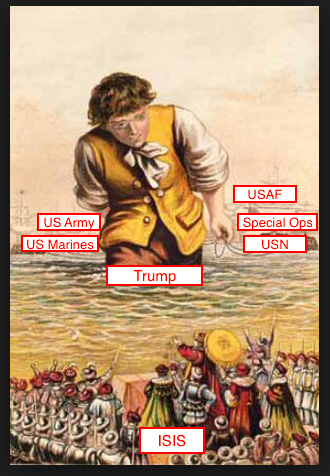 
Raqqa has been a crucial part of the terror group’s self-declared caliphate. Until a few months ago, public squares were lined with decomposing bodies of those who had run afoul of Islamic State’s religious rules or bureaucracy.

Fighters for the U.S.-backed Syrian Democratic Forces, which is leading the assault to oust Islamic State from Raqqa, say on some days they have helped dozens of civilians reach safety. Other days, no one makes it out. Militants execute smugglers helping civilians flee and those accused of collaborating with the U.S.-led coalition.

The Pentagon has estimated there are fewer than 2,500 Islamic State militants left in the city, down from about 4,500.

Most important international event going on right now, not being reported: Raqqa.


Caliphate (ISIS may or may not hold these cities); all to the northeast of Damascus, or north of Baghdad


Some data points to keep in mind:
US Marine artillery moved into Syria; attacking the "capital of Isis":


"US Marine artillery moving into Syria means we will crush them. Fast in, fast out. Crush them; move in, fast move out fast. Marines don't stick around; no nation building. In support role; artillery can sit back 10 kilometers; not on front lines; support role; ISIS will be crushed in Raqqa." -- Republican Congressman former US Marine (or Army?) artillery officer.


US Marines reportedly arrived in the past few days to establish an outpost from which they will be able to fire artillery at IS positions some 32km (20 miles) away. US special forces are already on the ground, advising the Kurdish-led Syrian Democratic Forces (SDF) alliance. The alliance is expected to launch an assault on Raqqa in the coming weeks. Over the weekend, a separate force of elite US army Rangers was also deployed near a town north-west of Raqqa in heavily armoured vehicles, in an attempt to end clashes between SDF fighters and a Turkish-backed rebel force.


The force is part of the 11th Marine Expeditionary Unit, which left San Diego on Navy ships in October. The Marines on the ground include part of an artillery battery that can fire powerful 155-millimeter shells from M-777 Howitzers, two officials said, speaking on the condition of anonymity because of the sensitivity of the deployment.

The expeditionary unit’s ground force, Battalion Landing Team 1st Battalion, 4th Marines, will man the guns and deliver fire support for U.S.-backed local forces who are preparing an assault on the city. Additional infantrymen from the unit will provide security, while resupplies will be handled by part of the expeditionary force’s combat logistics element. For this deployment, the Marines were flown from Djibouti to Kuwait and then into Syria, said another defense official with direct knowledge of the operation.

My quick unedited e-mail to a reader who thought it might be Minot AFB B-52's to Asia:

This may explain the "switch" announced this past week. After 12  years, Barksdale B-52 bombers ceding Mideast mission to Minot. The question is why after 12 years was decision made to switch Mideast from Barksdale to Minot.

Possibly you are correct that Minot bombers going to Asia, but also with switch it's possible the Barksdale bombers are moving to Asia and Minot moving to Mideast.

Regardless of specifics, it certainly suggests Trump has unleashed his military.

After 8 years of "no-drama Obama" we're finally seeing some movement. Trump is absolutely overwhelming Congress and the media. No one can keep up.

By the way, what a great opportunity for a two-fer. Everyone is well aware that Trump not happy with Chinese movement into the South China Sea. Moving B-52's as a show-of-force against China might not be a smart move, but moving B-52's as show of force against North Korea makes a great cover story. Something tells me that China won't like North Korea's stupidity drawing US B-52's into the region.

Update: update. I'm wrong. This is nothing new. We've been doing it for quite some time, alternating between Barksdale and Minot with regard to NOKO and SOKO. Minot Daily News.
Posted by Bruce Oksol at 8:14 AM