The Bismarck Tribune also has a story on the data.


Dennis Gartman (CNBC contributor) who said oil would never see $55 again, turned bullish this week, suggesting one could see another $6 - $8 on the upside vs only $2 to $3 on the downside.

Well, so much for that.

Will oil open below $50 this morning?
Will oil trade below $49 today? In pre-market trading, actually traded below $49 briefly
"Holy, Batman, what do we do now?" -- Saudi foreign exchange reserves
Why $50 oil  is more likely to be a ceiling than a floor: CNBC
About two weeks ago, bearish Gartman made bulllish call suggesting the floor for oil was now $55
Shale producers to increase production "despite OPEC's warning" -- Reuters
Shell sells sands -- $7.25 billion -- Reuters
Oil majors still years away from repairing balance sheets after price war -- Reuters
March: refinery demand historically at its lowest in the month of March; demand for oil, gasoline will start rising again next month and peaking through the summer months

Even Lindsey Graham is now on board. Wants spy agencies to come clean. 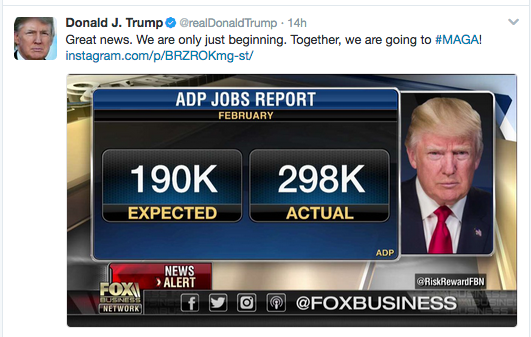 Thousands of children shut out from school as schools closed down in northeast due to teachers' strike a day without a woman protest.

Non-participating parents who only wanted their children to go to school scrambled to find child-care alternatives.

Meanwhile, the city of Boston reports record number of folks applying to enroll in charter schools.

High-tech industry in Silicon Valley seen as most-pro-women for hiring:
Whatever. One wonders how many women didn't show up for work at Apple yesterday?

Spurs epic comeback; highlights below
Wake Forest buzzer beater: this is pretty much a must-watch


RBN Energy: why more liquefaction capacity may be needed in less than three years.

Scott Adams: how to convince skeptics that climate change is a problem. Another must-read.
Posted by Bruce Oksol at 5:45 AM