After being inactive since January, 2015, this well is now back on-line:

OPEC Never Was A Cartel; Interpreting Graphs -- Thank Goodness For The Internet -- December 5, 2015


Whatever hope the old cartel had of reasserting control over the oil producing nations ended on Yom Kippur of 1973, with the Egyptian invasion of the Sinai. The renewed war in the Middle East caused an oil-buying frenzy in Europe and Japan, as nations fought to build up their reserves of crude oil. Saudi Arabia and other oil producers adopted a policy of charging whatever the freight would bear. Within weeks, the posted price for crude had more than doubled to $5.60 a barrel. No OPEC control was involved: it was a war that permitted individual nations to raise their prices.

Another price explosion followed the announcement by Saudi Arabia and other Arab states, in October of 1973, that they were cutting back oil their oil production and embargoing shipments of oil to the United States. This cutback did not result from any OPEC decision, either. Indeed, many OPEC states, including Iran. Indonesia, Venezuela, Ecuador, and Gabon, actually increased production (and even a few Arab states in OPEC, notably Iraq and Algeria, did not reduce their production). It was almost exclusively an initiative of Saudi Arabia.

Moreover, the Saudi decision to shut down 10 percent of the country's oil production was not based entirely on considerations of the plight of the Arabs. The Senate Subcommittee oil Multinational Corporations ascertained from testimony of American engineers who were responsible for operating the Saudi fields in 1971) that a 40 percent cutback in the giant Ghawar field was required for the installation of water injection equipment. If it had not made these cutbacks, the entire reservoir of oil would have been jeopardized. Jerome Levinson, the general counsel of the committee, writing under the name Peter Achnacarry, stated: ". . . the embargo saved Saudi Arabia from the embarrassment of having to explain supply shortages resulting from technical problems."

By cloaking the cutback in a political purpose, the Saudis were able to induce other Arab producers, both inside and outside of OPEC, to join them.

In the wild price spiral that followed the Saudi shutdown, the official OPEC price was completely disregarded by other members. Iran and Qatar held auctions to determine how high they could raise prices. At its subsequent meetings, OPEC could do no more than ratify the prices that had already been established by a panicked market.

Original Post
I get a kick out of the Bloomberg interpretation of the graph below: "OPEC's crude production has exceeded its target for 18 months straight." Really? OPEC has greatly exceeded its target since 1998. It appears that on only two occasions did production actually hit or drop slightly below target in the past 17 years or so. What's this "18 months straight" crap? Yes, strictly speaking, but absolutely "inaccurate." In addition, the delta between the target and actual production was much, much wider in the early days of the Bakken boom (2009 - 2012) than it is now. 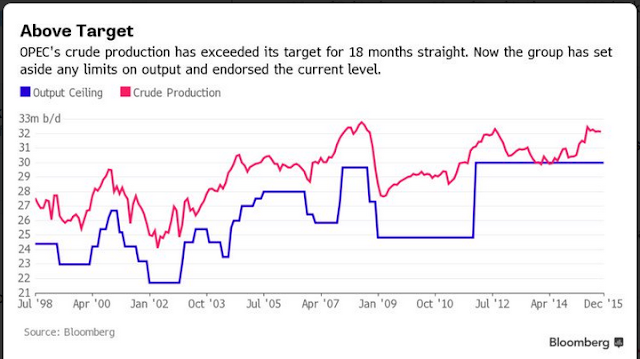 Speaking of graphs, I forgot to post the weekly natural gas fill / draw rate (a dynamic link). I believe this is the first week this year that there was an overall net draw on natural gas, down 53 Bcf.


Working gas in storage was 3,956 Bcf as of Friday, November 27, 2015, according to EIA estimates. This represents a net decline of 53 Bcf from the previous week. Stocks were 543 Bcf higher than last year at this time and 247 Bcf above the five-year average of 3,709 Bcf. At 3,956 Bcf, total working gas is above the five-year historical range.