A reader sent me a link for spot crude oil prices. If it is what it appears to be, it is incredible. Exactly what folks have been looking for. This is also linked at the "Data Links" page.

A huge "thank you" to the reader for taking time to find this link and forwarding it. This should make a lot of folks very happy.

Incidentally, another reader confirmed that prices paid for Bakken oil from a Statoil well (or wells) is about $10/bbl less in October (2013) compared to September (2013) -- about $97 vs $87 for the more recent month.

A reader sent this screen shot of the spot price of oil from Bakken wells over the past two years. It only includes the price/bbl. Each column represents a separate well, the name of which is not shown.  It provides newbies, especially, some idea the wide range in royalties one can receive from different wells, from different operators in the same month. Generally, individuals who send me this information have wells in a relatively small geographic area, so transportation should not be a major factor (although I can imagine exceptions). The prices/bbl in the screen shot are from wells from six different operators. 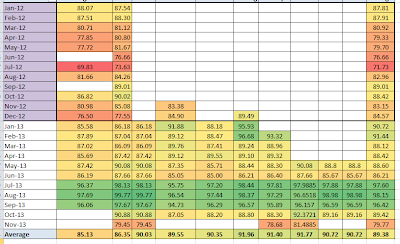 Note from the reader:

A reader sent me a link for spot crude oil prices. If it is what it appears to be, it is incredible. Exactly what folks have been looking for. I will post a stand-alone so folks don't miss it, and I will link it at my "Data Links" page.

Also, a reader sent me a web page for a company involved in "Produced Water" which I recently blogged about. The e-mail and web page were not solicited. I know nothing about the company. The link is for Echo Energy Group.

This well was approved for confidential status:
This permit renewed: 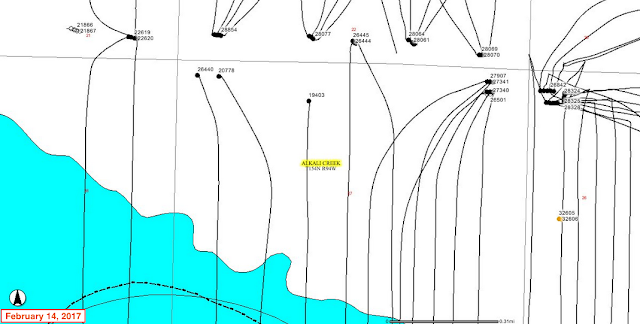 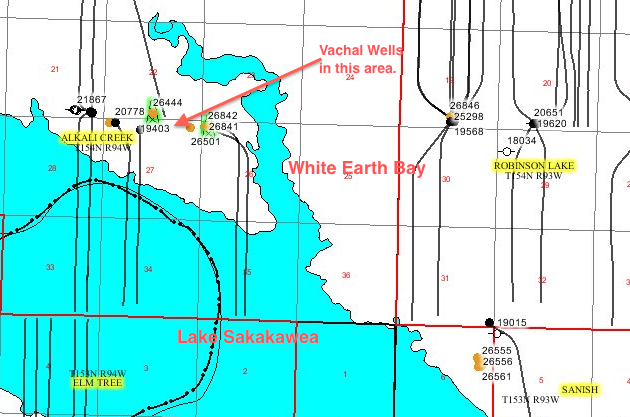 This is not going to make my wife any happier with Target. I've posted two earlier stories, different sources, suggesting that the Target breach included PINs, which Target has steadfastly denied until today.

AP through Yahoo!News is reporting:

Previously Target had said that encrypted data was stolen but stopped short of identifying it as PIN numbers. But the company issued a statement Friday that additional forensic work has shown that encrypted PIN data was removed along with customers' names and card numbers.

A PIN number is the personal identification code used to make secure transactions on a credit or debit card.

Data connected to about 40 million credit and debit cards used at Target were stolen between Nov. 27 and Dec. 15. Security experts say it's the second-largest theft of card accounts in U.S. history, surpassed only by a scam that began in 2005 involving retailer TJX Cos. In addition to the encrypted PIN numbers, the stolen data from Target included customer names, credit and debit card numbers, card expiration dates and the embedded code on the magnetic strip on back of the card.

Still, Target said it believes the PIN numbers are still safe because the information was strongly encrypted. The retailer said that PIN information is encrypted within its systems and can only be decrypted when it is received by its external, independent payment processor.

Sure, strongly encrypted. Until "it is received by its external, independent payment processor."

Target continues to tell folks to continue using their credit cards without cancelling and getting new account numbers, at least according to two folks who have asked the question directly. Okay.

I find it interesting that two sources, one as early as December 20th, or thereabouts, suggested that PINs had been stolen. To date, most folks affected by the theft have not received an e-mail from Target explaining exactly what it going on. My daughter / son-in-law stopped by our neighborhood Target store yesterday and were surprised to see most (all?) shoppers paying in cash. They are used to seeing credit card after credit card in their Portland, Oregon, Target store, so no credit cards being used here at the local Target store caught their eye(s).
Posted by Bruce Oksol at 12:10 PM No comments:

June 23, 2015: it should be noted that in addition to these eleven (11) Hawkinson wells on multi-well pads, there are two singletons. One was the first Hawkinson well; the most recent is a singleton still on confidential list.

The CLR Hawkinson wells have been updated. There are eleven (11) Hawkinson wells on multi-well pads. Most of them had IPs in the typical CLR range of 400 to 900 bopd. Of interest:
I thought the IP might be a typographical error, but that is what is reported on the sundry form. Of course, that could be a typo, also, but that would be unusual.

In addition to these eleven wells, there was an older Hawkinson well spud in 2010:
But that's not all. There are two more Hawkinson wells that were drilled from the other end of the spacing unit:
There are now fourteen (14) long laterals in that Hawkinson/Oakdale spacing unit.

Your grandmother is an incredible cook and chef. It's always great to have your aunt Laura come home. When Laura comes home, we always have fried chicken (awesome) and chocolate cake/chocolate frosting (awesome-er).

The best breakfast is Starbucks coffee and chocolate cake. Starbucks arrived late in my life; chocolate cake for breakfast began back in 1975, or thereabouts. It was another time, another place --a long time ago, in a galaxy far away.

I am still reading Franz Kafka's Amerika, about a chapter a day. As mentioned earlier, there was no particular reason to be reading it now, but every once in awhile I get back into a "kafka-phase" and I needed a small book to carry/read while standing in Christmas lines.

I always find it interesting how dots connect, how parallel lines cross (in a non-Euclidean universe), and it happened here, too. I was hoping to get the new Salinger biography for Christmas, and I did, and now I cannot put it down. It turns out that that Kafka "would become a critical writer to Salinger," p. 80. Who wudda guessed. So, during my mini-Kafka-phase I happen to read the biography of Salinger for whom Kafka played a major role in his literary life.

I thought I knew WWII fairly well, through biographies and histories, and novels such as Catch-22 and Slaughterhouse-Five, but the Salinger biography provides a deeper, more personal look at D-Day, the Battle of Hürtgen Forest, and the Battle of the Bulge. Salinger participated in all three, and was among the first to enter Kaufering Lager IV, and Buchenwald, two brutal concentration camps.

It was said that men who were in combat for 200 days in WWII went insane. Salinger checked himself into a civilian psychiatric hospital in Nuremburg while still on active duty (July, 1945), and was given an honorable discharge on November 22, 1945. He was sane enough to know that he did not want to have a mental health diagnosis as the reason for his military discharge.

It's an incredibly good biography. It's a different format than typical biographies which may dismay many folks, and it lacks an index.
Posted by Bruce Oksol at 9:45 AM No comments:


NGL volumes continue to climb because of all the surging “wet” shale gas production.  These days about 7% of gas plant NGL production is “isobutane”, (also known as IC4, I Grade, methylpropane, R600a, iso and “izo” to our friends in Canada).  Over the past two years gas plant production of iso is up about 25%, and that volume is expected to increase another 30% over the next two years.  Most isobutane is used by refineries to make high-octane alkylate, but what about the rest?  Today we take a closer look at this lesser known natural gas liquid (NGL) and the sometimes exotic uses it is put to.

Disclaimer: this is not an investment site. Do not make any investment decisions based on anything you read here or what you think you may have read here.

At 10:00 a.m. ET: TV crawler crude oil is trading above $100. All on demand. Dollar is strengthening, which usually results in oil dropping in price.

Where to live? Think taxes. First, this story: Bloomberg reports that east coast moguls have learned the best addresses are in South Dakota. Meanwhile, The New York Times is reporting that Florida will soon overtake New York in population. Incredibly the NYT article did not mention the word "taxes" except once and that was in terms of a proposal to entice new businesses with no tax commitments for ten years if they relocate in Florida. I wonder how many New Yorkers have "moved" to Florida, using their second home address as their residence for tax purposes. Minnesota has looked at this issue, too.

I was unaware of this bit of global warming. I guess it happened while I was traveling and visiting southern California. Apparently thousands are still without power after global warming ice storms hit the US from Michigan to the northeast. Although I always assumed this was where they expected cold weather this time of the year. Must be worse than usual.

Major utilities in Michigan on Thursday reported about 83,000 customers remained without electricity from a winter storm that hit Saturday, coating power lines with ice and snapping tree branches. Large-scale outages also continued in Maine and parts of Canada, including the provinces of Ontario and New Brunswick.

I read this article earlier this morning: it really doesn't shed any new light on the "UPS Christmas Even Snafu." Simply too many last minute packages and on-line retailers over-promised, and literally, under-delivered. I don't blame UPS.

All of a sudden natural gas inventories show a shift in market. It's all that global warming. I can't make this stuff up. Fortunately for the warmists, frackers came along just in time.

This is interesting: for Big Oil, asset-sale options shrink. This has to do with Europe's Big Oil, not the US.
Posted by Bruce Oksol at 8:08 AM No comments: