The Dickinson Press is reporting that high school football returns to Alexander:


Alexander Public School, which had about 55 students before oil development took off in the area, recently had a co-op arrangement with neighboring Watford City for athletics.

With 210 students enrolled this fall, and enrollment projected to be 360 by 2018-19, Alexander officials decided it was time to break away from Watford City and bring back its own teams.

Posted by Bruce Oksol at 2:06 PM No comments:

Remember: The Atlantic Monthly says the Bakken boom is a bust. Pundits say the US shale operators won't be able to survive. And so what do we have here? QEP cancels a 4-well pad to replace it with a 7-well pad in the heart of the Bakken.

The Atlantic Monthly article at this link: https://www.theatlantic.com/business/archive/2015/06/north-dakota-oil-boom-bust/396620/.

It appears QEP canceled the permits for the 4-well pad in 2-150-95 (Blue Buttes/Spotted Horn) and replaced them with permits for a 7-well pad. (Note: Foreman is misspelled on the map below). 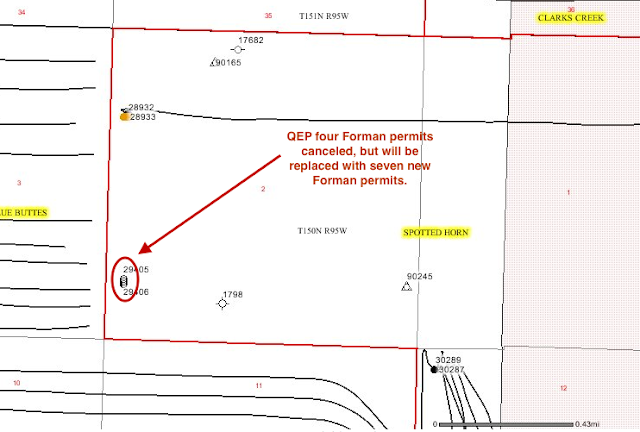 From the file report of #21331, mostly paraphrased:


Interestingly enough, this was the first well in this drilling unit, back in 2012, and it targeted the Three Forks, not the middle Bakken. It was noted that Helis had drilled ten Devonian Three Forks double-section lateral wells in 2011. It sounds like the drilling window is about 15 to 35 feet.

The Pronghorn member: "Recently the North Dakota Geological Survey has reclassified the lower approximate 10 feet of the Lower Bakken as a stratigraphically and lithologically distinct unit. The now referred to as the Pronghorn Member is present in Spotted Horn and surrounding fields... it is approximately 8 feet thick in the Foreman 5-2/1H well. The unit thickness is variable and in some wells the interval has not been observed."

The Three Forks: gas shows were significantly lower in the Foreman 5-2/1H than the Jones, State, and Levang wells; this was unexpected; and "nothing int he lithologic observations can account for the decrease in gas shows." Gas shows of 700 units were common. Gas continually increased during the lateral, with connection gases as high as 3,413 units. Trip gases were flared twice; both flares were 2 - 5 feet in height.

In long posts like this there will be factual and typographical errors; I do not have formal training in any of this and may have missed important points. If this information is important to you, go to the source.

Whiting's Flatland Wells In Twin Valley Have Been Hooked Up To ONEOK's Pipeline -- September 5, 2015

Regular readers will remember that ONEOK announced a few weeks ago that it had upwards of 700 wells in the Bakken to connect, IIRC. [700 wells this year, 2015; and 600 wells next year, 2016. It should be noted that the Bakken is an oil play, not a natural gas play.]

What happens to excess CBR tank cars? They get parked. For example:

This was reported some time ago, but I'm only now getting to it. For the archives.

The fall in demand to move crude has caused Middle East outflows to tumble to their lowest since before the summer, Platts ship-tracking tool cFlow showed Wednesday, resulting in numerous VLCCs being idled for longer while ample supply and low bunker fuel prices have continued to push down freight rates.

Over the week to Wednesday, sailings from Saudi Arabia, Iraq's Basrah, Iran and the wider Middle East hit their lowest since before the start of June as refinery run cuts across parts of Asia have weakened demand.

So, just when Saudi announces it will not cut production (last October, 2014), causing the price of oil to plummet; Asia sees huge decrease in need for oil. Oh, well.

But look how many ships sail from Saudi Arabia every month; this is really quite amazing -- remember, these are VLCC, the largest tankers:


Departures from Saudi Arabia fell to 24 from 30 last week, while total sailings for August slipped to a four-month low of 125 VLCCs, down from 137 in July.


From Iraq's southern terminals, five tankers left over the week, while in August, a total of 36 departed, up from 34. Despite the slight uptick in VLCC sailings, crude oil exports from Basrah on all ship-types fell in August, to 3.021 million b/d, a drop of 43,000 b/d from July. Oil ministry spokesman Asim Jihad, however, said the fall was due to a technical fault in the export system.
Inshallah.


Total outflow from the Middle East -- or the count of ships that left the region -- sank to 19 from 24 last week, also the least since before June. ("Sank" is probably not the best word to use when talking about ships in the Mideast.)


Within West Africa, Angolan departures fell to a three-week low of two, down from three the previous week. In August, a total of 15 ships left, with 11 going to China, which typically takes around two thirds of VLCC sailings from Angola -- currently its second largest supplier of crude after Saudi Arabia.

Also this regarding Angola to US crude oil:


The US also takes crude oil from Angola -- its 10th-largest supplier -- at 100,000 b/d in June, however, the boom in US tight oil production has caused this flow to drop by three quarters from around an average 400,000 b/d in 2010. However, the bulk of the cargoes are hauled on Suezmaxes, with no VLCCs making the voyage this year, while only one went in 2014.