Finally, something we've been talking about for years, others are finally noting. Via twitter: 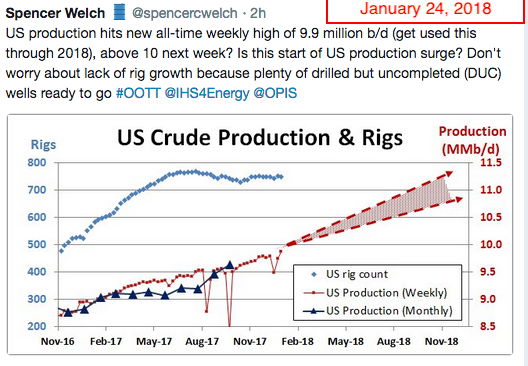 
The world’s largest energy companies plan to significantly widen a two-year effort to standardize the kit they use to pump oil and gas, hoping they can deliver significant cost savings.

The discussions, scheduled on Wednesday for a closed-door meeting at the World Economic Forum in Davos, are the latest sign companies are seeking to tighten their belts permanently even as oil prices recover. Bespoke equipment designed on a project-by-project basis was common during the decade-long boom in crude prices, but looks less affordable after the industry’s worst downturn in a generation.

Major oil companies plan to expand their list of standardized kit to 40 from the initial four items agreed on when they started their collaboration in 2016, also at Davos.

Initially, the project included giant valves, electrical transformers, and two pieces of submerged oil well equipment. Executives believe they can reach a technical consensus with their suppliers on a new list including equipment from across the whole industry, the people said, asking not to be identified because the meeting is private.


Iceland’s hope of finding oil offshore its coast is fading after China and Norway decided to back out of the island nation’s only remaining exploration license.


Cnooc Ltd., China’s state-controlled producer, and Petoro AS, Norway’s state-owned oil company, decided to relinquish their interest in the license.

Their junior partner, Eykon Energy ehf, says it wishes to keep its 15 percent stake, but the agency said the small explorer doesn’t have the technical or financial capacity to continue operations alone.

Iceland launched its first exploration round in 2009 as the nation was reeling from its economic collapse a year earlier. The north Atlantic island had high hopes, aiming to replicate the offshore success of Norway, western Europe’s biggest oil and gas producer. Two other blocks have already been relinquished.

Later, 4:17 p.m. CT: beating a dead horse (the Campbell Soup story below). Don sent me another article on this story. My thoughts, not ready for prime time:

I'm beginning to think that this was more about good-old fashioned consolidation.
Four plants with excess capacity. Close one plant and consolidate to three plants. Just closing one-fourth of all your plants and still meeting supply/demand seems to be the right thing to do. Folks are simply buying less Campbell Soup.
Campbell Soup is pretty old school. I doubt millennials are buying it. I still enjoy Campbell soup but I'm probably a dying breed. But I find Campbell Soup incredibly expensive -- I remember cans used to be below a dollar. Now they run about $1.79 here; occasionally go on sale to $1 if bought in bulk.
Making Campbell Soup is actually rather time-consuming -- generally it has to be cooked on the stove after scooping it out of the can; alternative like ramen can be microwaved. Clean-up is a pain if cooked on the stove; microwaved ramen container can be thrown in the trash.
The Toronto was targeted for closure as far back as 2015, I think the article said. If I were to re-do the post, or update the post, I would say that this has nothing to do with energy or taxes or healthcare, per se. Simply consolidating from four factories to three factories because way too much capacity.

But why did they consolidate by closing that Canadian store? Ask Trump.

Original Post
From Bloomberg, Campbell Soup is shifting Canadian production to its US factories. When I saw this I immediately thought that it was due to a) energy; and/or, b) taxes.

But I'm not exactly sure how taxes for a company headquartered in the US with production facilities elsewhere are affected by the Trump tax bill. So, for now, let's call that a wash.

But energy: that's a no-brainer. Anyone following the blog knows that Canada has a huge energy problem despite being energy-rich. (Venezuela is the best example of an energy-rich poor country.)

But there needs to be something else.

Let's look at an earlier WSJ headline/story that I posted earlier today:

One would think that socialized medicine in Canada would be a better deal for corporations but one wonders if corporations in Canada don't pay a disproportionate cost of health insurance premiums for their employees. I don't know.

On the other hand, the shift in production may have absolutely nothing to do with energy, taxes, or healthcare premiums.

Most likely it is simply over-capacity. The article suggests that US facilities can easily make up the difference caused by shifting production from Canada to the US. But it is noteworthy, they didn't close a US factory (due to over-capacity) and shift that production to Canada.

All one can say for certainty about this is this: it's less expensive to make soup in the US and then send it to Canada.

Gee, I wonder if Trudeau might put a 50% tariff on US soup? LOL.

By the way, speaking of energy, if your business has a high-energy requirement, where in the US would you rather be? 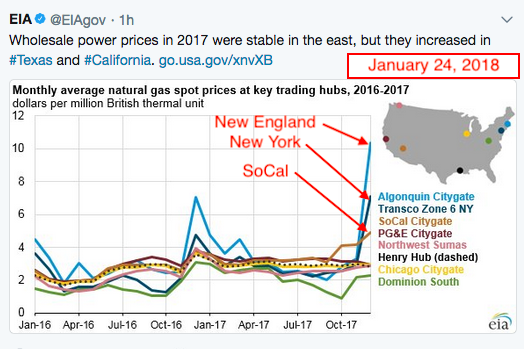 That's a troubling trend in southern California, by the way.
Posted by Bruce Oksol at 3:17 PM No comments:

A reader sent me this, from the EIA:


U.S. crude inventories fell by 1.1 million barrels last week, short of expectations, but the 10-week streak of declines represents a record, according to U.S. Energy Information Administration data going back to 1982. At 411.6 million barrels, stocks are at their lowest since February 2015. [EIA/S]

I replied, not ready for prime time:

We're a long way from balancing -- my calculations suggest 20 weeks before we're balanced; no change from last week.

In addition, as the price for crude rises, there is a risk Russia and Saudi will start raising production (Saudi will use the excuse they don't want to upset the "synchronized global economy" with expensive gasoline which could cause problems for the economies of China and the US).

With a drawdown only 1.1 million bbls, and "short of expectations," my first thought -- but I decided not to post it on the blog (earlier) -- was this the the low point on drawdowns from here on out?

All I know is I'm glad we have graphics and not just words. 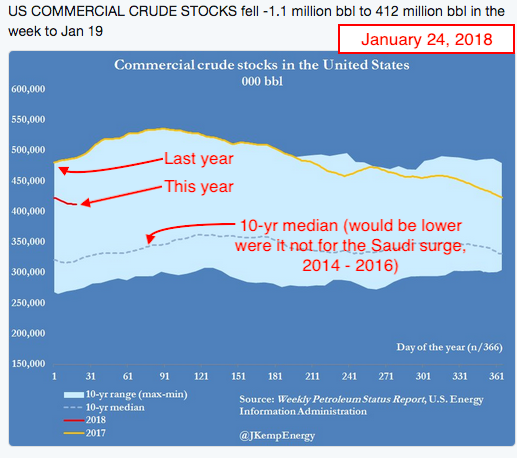 The good news is that this data or something else drove oil to almost $66 today.

Email ThisBlogThis!Share to TwitterShare to FacebookShare to Pinterest
Labels: WTI

Link here over at SeekingAlpha.

I have two books on my nightstand that I really enjoy: one I have had quite some time and it often ends up back on the shelf only to be pulled down and placed back on the nightstand, and then a more recent one. Neither of them are "about" Tammany Hall (NYC) but both of them have devoted a considerable amount of space to Tammany Hall.

When I read about Tammany Hall, I immediately think of Barack Obama. He came close to re-establishing his version of Tammany Hall. If Hillary Clinton had been his successor, without a doubt, Tammany Hall would have been re-created. It would have just gone by a different name.

Re-balancing based on today's data. WTI at $64.84, trending up. Although the weeks to re-balance has remained fairly steady, the drawdown at Cushing is quite remarkable.