Jamie Dimon, JPMorgan, is now the third important talking head to say we'll see an economic boom this year because of Trump's tax cut. Earlier this morning, it was Goldman Sachs CEO. Yesterday, it was another big man on the Davos campus who said anyone who's holding cash is going to look foolish this year. From CNBC:
When Don sent me that note, I replied:


So this is at least the third guy to say that Trump's tax bill was a huge, huge deal. One almost wonders if the makers and shakers were downplaying the tax bill early on so they could buy shares "cheap." Now that the market has had a huge run, they are now "pumping" the market to drive shares higher.

The market's rise has been parabolic, as some say, since November 8, 2016. But yet, no one on CNBC seemed to want to admit it (except for Joe Kernen and Rick Santelli) -- CNBC hosts seemed to keep trying to talk the market down as did their guests. I thought it was due to the fact they detest Trump.

That may be part of the reason. But those folks on CNBC are supposed to be some of the smartest financial knives in the drawer. My hunch: they knew all along how incredible the Trump tax cut was, but they were trying to talk it down so they could invest at lowest share prices possible, perhaps even hoping for a "correction." Last week, CNBC's senior markets commentator spent one full day talking about a possible "overshoot" in the market. When the market kept rising, he quit talking about it.

Example: CNBC talking head talking about the woes of Apple ("Apple falls on JPM concerns about iPhone orders") when in fact the shares of Apple were actually rising after JPM's "concerns": 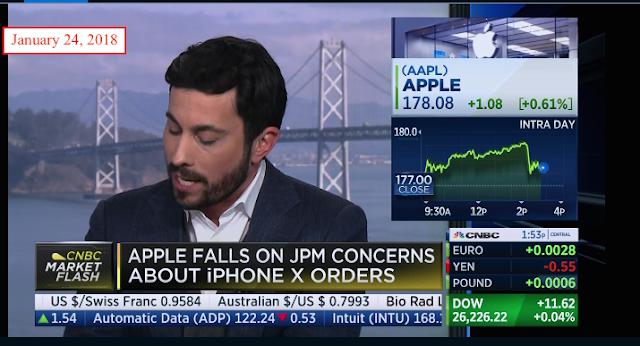 Now that the cat is out of the bag, as they say, being released at Davos where Donald Trump will give the penultimate speech -- David going into the lion's den -- I expect to see the CNBC folks to start talking the market up, now that they have had a year to "get in."

Just one of my many conspiracy theories. LOL.

Geee! Despite downgrade after downgrade, GE still manages to disappoint. Misses forecasts. Shares down another 1% trending back toward $16.

WTI: apparently the "draw" was 1.1 million bbls. I'll get those numbers posted as soon as possible. WTI is now solidly holding over $65. Breakeven in North Dakota, statewide: $21.
Posted by Bruce Oksol at 10:03 AM