Before we get started, this EIA site looks new. It may not (be new). I don't know but it looks new to me and looks pretty good. The link has been permanently linked at the "links" page.

It is amazing how fast the oil sector is returning to "normal." Remember all that oil the US government was going to release from the SPR? As far as I know, only one refiner was in on the deal, planning to take 500,000 bbls (plant capacity is 250,000 bbls daily; so two days crude oil for this plant) and then raising that to 1 million bbls. Now we learn that Phillips will not take all that was offered. They apparently have plenty of crude oil as things get back to normal. Phillips will take only 700,000 bbls of crude oil -- about three days of crude oil for this plant.

A "triple A" spokesperson said that release of crude oil from the SPR will have a great effect on supply of gasoline -- what a dunderhead. Is dunderhead a word?

In the background, re-runs of MASH. What a great series. On so many levels.

Wishing everyone a great weekend.

I'm in such a great mood -- seriously -- I'm going to take a break for a few hours. I might blog the daily activity report, but then sit back, reflect a bit on everything, and maybe post later this evening. I don't know. It's been another incredible week.

But I can't resist posting this story, which will probably be re-posted.

My dad was the "president" of the Williams County (Williston) commission when the "original" Lewis and Clark bridge was built. He was on the bridge, giving a speech, when that bridge was opened, for the ribbon cutting ceremony.

Regardless, fast forward several decades, and "we" now have a new Lewis and Clark bridge. From The Williston Herald:


Dozens of dignitaries gathered at the south end of the bridge Thursday afternoon for a ribbon cutting to mark the completion of the $80 million project — the largest single infrastructure project in the history of the North Dakota Department of Transportation. Its completion marks the end of six years of construction to make U.S. Highway 85 four lanes from Watford City to Williston.

Yes, this is a huge, huge story, that will hardly be a footnote in the book on the Bakken revolution.

More from The Williston Herald:


When the old bridge was built (1973), it handled about 1,000 vehicles a day. Now, though, about 10,000 vehicles a day use the structure. The new bridge can also handle larger trucks because of its wider, 12-foot lanes.

But now I know why I didn't know much about the "old" bridge. In 1973, I was away from home, in my last year of college.

This is just such an incredible country.

I'm in such a good mood, I would love to take May out for a really extravagant sushi dinner tonight, but, hey, we can't "burn" gasoline -- not much available in the area, although things are already improving.

By the way: I think the Lewis and Clark bridge story is a huge story and yet it was almost buried at the end of the Williston Wire. That tells me that so much more is happening in the Bakken. It simply doesn't quit.

August jobs report, pending:
Underemployment: see above. The 8.6% was never put into context -- at 8.6% -- almost back to historical lows. Another non-story. 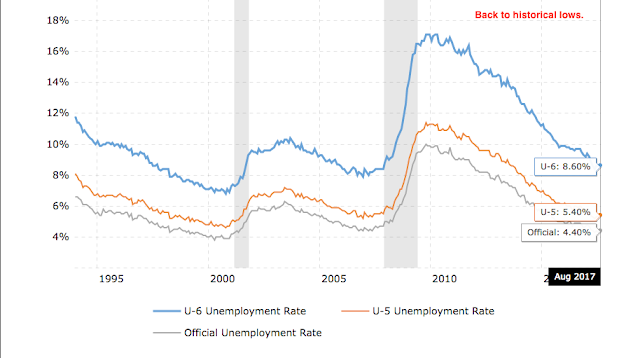 Auto sales, link here: Phil LeBeau (CNBC), expect, "solid, but not great" numbers. Expect sales rate of 100 - 200,000. Of course, over the next few weeks/months, the effect of Hurricane Harvey.

GDP: Op-ed: Houston-area economy is larger than Sweden and will drag down US GDP (by the way, Hurricane Harvey was the final nail in that coffin of any chance of a September, 2017, "Fed rate" increase; possibly true for December "Fed rate"-- no increase once he $190 billion damage estimates continue to roll in -- unless, of course, I underestimate how much the Feds hate Texas)

Peggy Noonan: the American spirit is alive in Texas.

Nightmare? If Trump ends DACA -- Obama's "Dreamers Act" -- the issue falls to Congress. (And that's how it should be done. Every Dem will vote for it; and, every RINO will vote for it; will Trump veto it; if so, veto-proof?)

Oh-oh: Meg Whitman has a different mess to clean up. See below.

US bombers in show-of-force after North Korea missile. (Under all previous administrations, US "gave in" to North Korea's demands after North Korea launched missiles; this time it's different. It would be interesting to see how the generals "voted" on this one; we all know it was Trump's decision. Huge story.)


So Ms. Whitman has some explaining to do, which hopefully will come during the company’s fiscal third-quarter earnings call next week. That was already shaping up to be a difficult task. Hewlett Packard’s stock price has fallen by 7% following each of its last two quarterly reports. A slump in the sales of servers, data-storage gear and other enterprise tech hardware have put pressure on what is left of the business following the divestitures of its services and software divisions.

Ms. Whitman needs to show a way out of that slump, which won’t be easy. Splitting from the computer-and-printer half nearly two years ago established Hewlett Packard Enterprise with a little over $50 billion a year in annual revenue. The subsequent divestitures leave the Enterprise Group and Financial Services units remaining, which are projected to generate about $29 billion in combined revenue for the fiscal year ending in October. That is down 6% from what those businesses generated last year.

A big problem is servers, which will account for more than 40% of Hewlett Packard’s revenue. Server sales for the six-month period ended April 30 slid more than 13% from the same period last year. Rival Dell—now private— has been pricing its own servers aggressively and has gained share. And Microsoft —Hewlett’s largest customer—has been cutting back on server orders as part of a broader move toward designing its own gear to power its data centers.

This is not an investment site. Do not make any investment, financial, travel, job, relationship decisions based on what you read here or what you think you may have read here. I generally no longer link Oilprice articles. Also, don't let the music confuse you with Spotify; completely unrelated. For one thing, the monthly subscription is considerably more affordable for the MillionDollarWay.
Posted by Bruce Oksol at 7:19 AM No comments:


RBN Energy: the impact of Harvey on crude oil markets.


Our preliminary estimates for the U.S. averages for this past week are that crude oil production will be down by 0.8 MMb/d to 8.7 MMb/d, reflecting about 1.2 MMb/d of production offline at the peak of the outage (mostly offshore and Eagle Ford). Imports are expected to be down by about 1.1 MMb/d to 6.8 MMb/d due to significant cargo cancellations into the Gulf Coast.

Consequently, total supply is projected to be down by 1.9 MMb/d (compared to the previous week) to about 15.5 MMb/d. Refinery-run reductions are projected to peak at about 3.0 MMb/d (up to more than 4.0 MMb/d including Port Arthur/Beaumont outages that did not happen until later in the week).

That works out to a decline in refinery runs of about 2.1 MMb/d for the week. Exports are projected to be down to about 0.3 MMb/d, or about 0.6 MMb/d below last week.

As a result, total demand is estimated to be lower by about 2.7 MMb/d to 16.0 MMb/d, implying a storage withdrawal of about 3.3 MMbbl.  After we did those numbers, on Thursday, August 31, DOE released 1.0 MMbbl of oil from the Strategic Petroleum Reserve on an exchange deal with Phillips 66 for their Lake Charles refinery.
Regardless, if these numbers are in the ballpark, instead of building inventory because of all the refinery outages, the industry will withdraw from inventory due to production shortfalls and especially lower imports.

But don’t forget, much of the inventory is still sitting in vessels out in the Gulf of Mexico, just out of the reach of government statisticians. These volumes will be coming in just as soon as Gulf Coast docks are up and running.