Holy mackerel. Let me check that out.

Yes, this well has gone over 500K bbls crude oil cumulative in less three years (another four months before we get to a full four years).

Petro-Hunt is not over-drilling in the Charlson; this is an incredible field. Petro-Hunt seems to be taking their sweet (pun intended) time drilling out this incredible field, probably one of the best fields in the Bakken.

Full production profile for this well at this post.

It should be noted that these wells are not new(s) to me. I follow the incredible Petro-Hunt Van Hise Trust wells here. I'll update that page now.

A huge thank you to the reader for reminding me of these great wells. Petro-Hunt is not moving the needle in North Dakota but it's probably getting the best bang-for-the-buck with its incredible Charlson wells.

500K in less than three years and then look at the parent well.

The well that just went over 500K in less than three years:

For whatever reason there certainly seems to be significant discipline and/or restraint in the Bakken. There is no evidence that operators are expediting their CAPEX plans. I think they're waiting for President Biden's environmental plans to kick in, pushing WTI to $80 or higher. A lot of very smart folks are investing based on predictions of $100-WTI sooner than later. Too many folks think, that with regard to oil vs EVs, 2050 is already here. I think those folks are going to be in for a (c)rude shock.

New dinosaur species discovered in Australia: taller than LeBron James, but shorter than the Williston airport runway. Link here. And over at wiki. Move over, Sue.

Robyn Mackenzie co-founded the Eromanga Natural History Museum with her husband, Stuart, after dinosaur bones were first discovered on their family property in 2006. The remains of about 15 dinosaurs have since been found on the property.

Unsolicited and completely unexpected I received this in my in-box the other day:

My team put together this resource about automobile energy and gas costs by state. Our energy analysts pulled different data from the Department of Energy, AAA, and other sources to help measure differences. They do a great job at updating the information once new reports come out by those sources. I think it would compliment your page nicely.

The link has been added to the "Data Link" page and the sidebar at the right.

FWIW: the gasoline cost for my 2011 Honda Civic, link here.

A reader asked if I had seen this article: EVs with negligible CO2 advantages of ICEs.

I replied to the reader but got a "failure daemon" note. This was my reply:

Yes, I did see that. I debated whether to post it. Two immediate thoughts: preaching to the choir, and all of us following this story closely know the CO2 story regarding EVs is questionable at best. And it was another story from oilprice which I already use too much. LOL.

Irony: the link was posted.
Posted by Bruce Oksol at 10:22 AM No comments:

Email ThisBlogThis!Share to TwitterShare to FacebookShare to Pinterest
Labels: $5Gasoline

Psychodelic Therapy Back In The News -- Nothing About The Bakken -- June 8, 2021

Field Trip Health: psychedelic therapies that bring you to life.

Three-page essay in the current issue of The London Review of Books, by Mike Jay, in his review of two new books:

Job openings: highest ever -- the number is so huge, no one can get their hands around it -- there are now 9.3 million jobs available in the US. This number is a record high, going back to when this number started being reported back in 2000. Analysts forecast about 8 million job openings. It will be interesting to see the breakdown of this number.

10-yr: 1.53%.You know, if this "inflationary period is transitory," there could be a lot of problems for recent home buyers. Just thinking out loud.

Let them eat cake: speaking of inflation. I only eat white bread priced $1.29 or less per loaf. And preferably at least a week old. My wife brought me this loaf today, 85 cents/loaf. She said she refused to splurge and would not buy the $1.29 loaf. 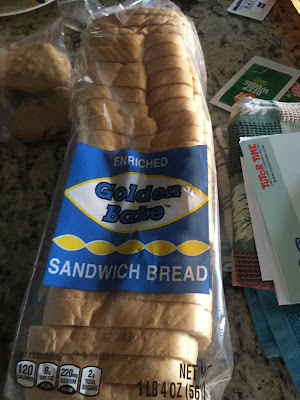 Amazon logistics: yesterday morning, about 10:00 a.m. my wife and I got to talking about her 14,500 photos on her iPhone (that is not inaccurate) and the amount of memory left on her MacBook Air (she is using about 45 GB of the 121 GB it has). I suggested she move her photos to an external hard drive and one thing led to another and by 10:30 a.m. I ordered her a 1TB Seagate external hard drive. That was yesterday morning, sometime between 10:20 a.m. and 10:30 a.m.

The hard drive arrived at our door at about 2:35 p.m. -- I forgot to check the exact time -- but think about that -- the order went in at 10:30 a.m or thereabouts, the robot located it, dropped it in basket, moved it the end of the conveyor belt; meanwhile, a mailing label and package material was being prepared. The oil-based synthetic plastic-like packaging envelope with mailing label and product met somewhere along the line; the hard drive was placed in the envelope and sealed.

Then, and this is the really, really amazing part, the package was put on the conveyor belt that took it to the exact van that was going to be in my neighborhood later that day. Think about that. Think about how many neighborhoods Amazon touches in the north Texas region which includes Dallas and Ft Worth. That's the piece that boggles my mind.

For me, it's not a big deal, relatively speaking, for a robot to find the product and getting it placed in an addressed envelope. What amazes me is this: how does the package get on the correct "little" neighborhood van? I'm sure every reader has a perfectly logical explanation how Amazon does this, but I still think it is phenomenal. I would use the words "magic" or "miraculous" but I tend not to believe in either (at least among mortals).

Wendy's: up 21% today. Like rig counts in the unconventional oil patch, fundamentals in the stock market no longer matter.

API: in the tech world, stands for something other than the American Petroleum Institute.

Target: hitting on all cylinders. I am not invested in Target but I love the shopping experience there. Their meat selection is lousy compared to local supermarkets, and their floral department is incredibly poor, but overall, a great shopping experience.

Siri: this is funny. Jim Cramer has an Apple watch. He says he told "Alexa, set my alarm for 3:00 a.m." Just then, he realized he said "Alexa" when he meant Siri and he actually said, "Siri, I apologize. I meant Siri, not Alexa." He says, "Siri responded, 'saying that happens a lot.'" Don't you just love it? Sort of like the oil and gas industry trolling North Face in Denver.

Regular, unleaded gasoline, north Texas: $2.49 / gallon in our neighborhood. Our area stations run a bit higher than a few miles away from the highways.

This year has been a mixed bag for Appalachian natural gas producers. Outright prices in the region are higher than they’ve been in a few years, thanks to lower storage inventory levels and robust LNG export demand. However, regional basis (local prices vs. Henry Hub) is weaker year-on-year as higher production volumes have led to record outbound flows from Appalachia and are threatening to overwhelm existing pipeline takeaway capacity. Last month, Equitrans Midstream officially announced that the start-up of its long-delayed Mountain Valley Pipeline (MVP) project will be pushed to summer 2022 at the earliest. Then, just last week, outbound capacity took another hit as Enbridge’s Texas Eastern Transmission (TETCO) pipeline was denied regulatory approval to continue operating at its maximum allowable pressure, effectively lowering the line’s Gulf Coast-bound capacity by nearly 0.75 Bcf/d, or ~40%, for an undefined period. Today, we consider the impact of this latest development on pipeline flows, production, and pricing.