As of 5 p.m. the official measurement since midnight at Denver International Airport was 7.7″.

That is both the biggest one day snowfall so far this season and a new record for December 15.

Today: almost 8 inches. Previous record, all the way back to 1897 was less than 3". And to think the Kennedy clan thought their children / grandchildren would never see snow again.

The video of the post-race interview with Katie after the Ledecky 1,000-yard freestyle under 9:00 minutes was just posted on YouTube. Here is the video of the race itself.

This is a dynamic link. Trump is at 50% and Cruz is at 25%. But this is what surprises me: the near front-runner with Donald Trump some weeks ago was Ben Carson. Tonight the Drudge polling puts him at 1.5%. Jeb! -- pert-near tied with Carson at 1.8% (and that's rounding up). There was talk earlier today that Rand Paul was thinking of getting out of the race. If he does, one wonders where his supporters would go. My hunch: most to Cruz. I can't imagine any Cruz supporter going anyplace other the current two front-runners.
Posted by Bruce Oksol at 10:02 PM No comments:


There was only one new permit issued today --
There were two permits renewed, a Resonance Ballantyne permit for a well in Bottineau County; and a Triangle USA permit for a Simpson well in McKenzie County.

There were four (4) producing wells completed:

October 22, 2016: another update of these interesting wells; is there something going on with #28168 and a recompletion to explain all this?

April 10, 2016: of these six wells, QEP had a frack problem with #29326; QEP said they would come back to re-frack. I don't see sundry form regarding a new re-frack, but here is the updated production profile which suggests something has been going on:

April 10, 2016: in the original post, six wells were noted to be "back on the confidential list." Those wells have now been reported:

This is a very, very long note. The typical disclaimer holds: in a long note like this, there will factual and typographical errors. I may see things that do not exist, and miss things that are much more important. I am doing this for my benefit to help me understand the Bakken. Do not quote me on any of this. If this information is important to you, go to the source. I welcome comments.

N.B. When I went back to update QEPs State wells located in section 16-150-95, I noted that the wells had been taken off-line since I last visited, and when they came back on-line, production in some of them had noticeably increased.

N.B. When I went back to update these wells (the QEP State wells in section 16-150-95, which I refer to as the index wells for this note), I noted that six horizontals seen on an earlier screen shot were no longer there. Those laterals had been drilled to total depth and were not confidential. However, prior to being fracked, they were put back on the confidential list (or put on the confidential list for the first time) and the horizontals were removed the NDIC GIS map server -- something I had not noticed that the NDIC would do -- remove horizontals from the map if the wells went confidential. This will be important in light of all the SI/NC (DUC) wells.

So, now, unto the story. 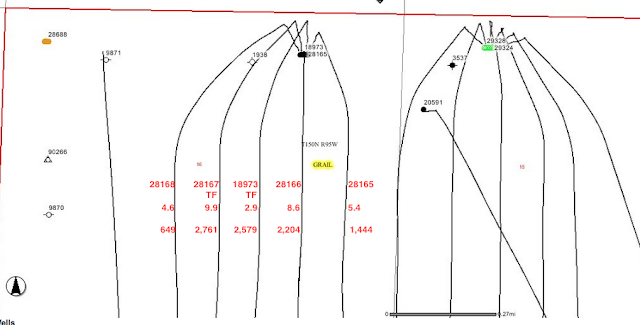 Today -- moments ago -- I went back to the GIS server to see what that area looks like today. Here is the screen shot today. Note the new laterals to the far west (left side) and the same "index wells" in the center. However, what do you notice to the right, the east? The six horizontal wells that looked like a "Daddy Longlegs" spider to the east (the right side) in the March 20, 2015, are NOT in the screen shot today: 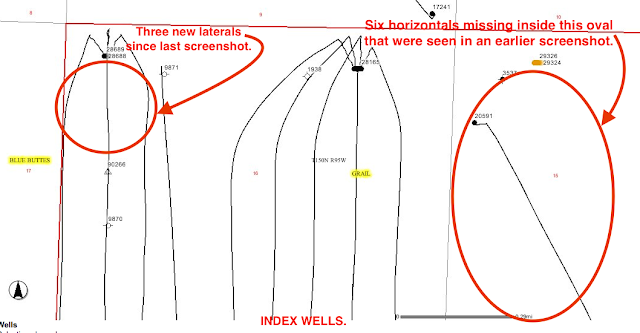 I will look at the six wells whose laterals are missing in today's screen shot; the wells themselves are now "yellow" -- indicating they are on the confidential list. Let's see what the file report says:
A letter from QEP to NDIC dated April 9, 2015: the six wells on the Jones 4-15X pad have "reached TD. Based on QEP's current back log in completion schedule, the completion operations for the wells listed below will be delayed (and then the six wells are listed)."

Although these wells are on the confidential list, because oil from these wells have been sold, oil runs and MCF sold must be reported:

Based on the data above, it looks like the wells were completed/fracked sometime in July/August/September, 2015, timeframe (7/15 - 9/15).

Now let's go back to the production profiles for the index wells. This was the synopsis of one of the five index wells as of December 16, 2014 with updates:

Now, where were these index wells in relation to the newer wells (still on confidential list, and probably fracked in the July - September, 2015, timeframe)?
Two comments: