October 29, 2017: CNBC notes that US oil producers are moving into the Asian market. 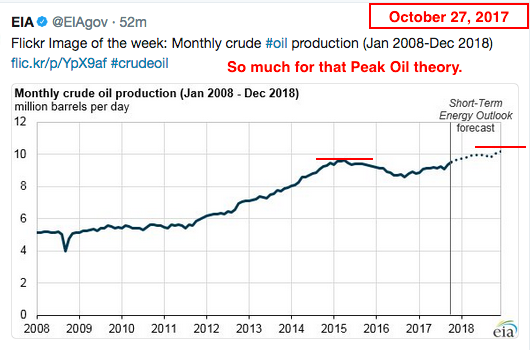 
The recently announced expansion of the Sabine Pass liquefied natural gas (LNG) terminal in Cameron Parish, Louisiana, will add to the rapid growth expected in LNG export capacity for the United States under construction through 2019.

The fourth natural gas liquefaction unit—referred to in the industry as a train—at the Sabine Pass LNG terminal is substantially completed.

Train 4 has the capacity to liquefy 0.7 billion cubic feet of natural gas per day (Bcf/d). Cheniere expects to begin commercial deliveries from Train 4 in March 2018. All of Train 4’s capacity has been contracted under 20-year long-term contracts: 0.5 Bcf/d to India’s state-run natural gas company, GAIL (India) Limited, and the remaining volumes to Shell and Cheniere’s global portfolios for trading in the spot LNG markets. GAIL is one of India’s largest LNG importers, with 1.1 Bcf/d of LNG imports in 2017 (44% of India’s total LNG imports).

Later, 3:31 p.m. Central Time: to the list below add this -- even with only 53 rigs in the Bakken, there are currently 2,400 wells either shut in (completed and not producing for operational reasons or economic reasons) or drilled but not completed (DUCs). Putting that in context, in the "biggest" year of the Bakken boom, less than 2,400 wells were drilled. I don't know the current rate of drilling wells, but my hunch is that 1,000 new wells will be drilled in 2017. I will sort that out later. So, when folks tell me that at some point the DUCs are completed (I add in the shut-in wells) I see at least two more years of simply bringing these wells (back) on line, even if all rigs were shut down today. My hunch: one week to bring a shut-in well back on line; two weeks to complete a DUC and get oil into the pipeline.

Interestingly enough, another reader sent me a link to an article that raised this same issue. I will post that link, that article, and my comments when I have more time.  However, this was my off-the-cuff, not-ready-for-prime-time response regarding his comments about rig counts in the Bakken.

Do not take this out of context and do not quote me on this.

I have not had time to polish this to the usual high standards of The Million Dollar Way. LOL.

Sometimes I think you are one of the very few people who really understands the Bakken. Folks jut don't get it. They keep counting rigs. I keep reporting rigs on a daily basis because everyone thinks the number of rigs tells us something. But you are absolutely correct, and I've mentioned it on the blog numerous times: the number of rigs is irrelevant.

Of course, that can't be taken out of context. It depends on what one is measuring when counting rigs.

The number of rigs is important for at least two reasons.

Two, a company like Whiting can do with three rigs what it used to do with 10 rigs, so if the rig count drops from 10 to 3 by Whiting, that does not concern me. But if a new operator comes in and drills with one rig, that speaks volumes. We now have a new operator and a new rig. If two new operators come in and they each have one rig, we now have two rigs. And we have three companies drilling instead of just one (in this example).

I'm out and about right now, so I will post the WLL data later, but also, did you see the EUR type curve: 1.5 million bbls/well? This means that the CEO is not going to okay a request by his geologists or his board to drill a well if they can't convince him the payoff is relatively quick and the EUR is 1 million bbls or more.

Thanks for the note. It made my day.

Wow, I love these stories. I remember all the hand-wringing by the talking heads over at CNBC these past few weeks about a) Apple; b) iPhone 8; c) iPhone X; d) Tim Cook; e) life; f) sex; g) black holes; h) dwarf stars; i) the hurricanes. The big question no one has yet asked: has Kim Jong-Un ordered his Apple iPhone X.


Apple’s most expensive smartphone, the iPhone X, sold out in less than 10 minutes upon being made available for pre-order this morning.

The iPhone X – officially pronounced “10” – costs from £999 with 64GB of storage, topping out at £1149 with 256GB of storage, which is higher than the starting cost of three of Apple’s fully fledged computers.

Despite the price tag, demand is high. The company’s online shop experienced server issues in the minutes immediately following the launch of pre-orders, and the initial allocation of devices, due to arrive on 3 November, had completely sold out by 8:10am in the UK. Less than an hour later, the waiting list had extended to cover the entire first month.

The iPhone X rapidly selling out may not be entirely good news for Apple. The company has reportedly been concerned it will face severe supply constraints for the iPhone X, with a story in Nikkei Asian Review claiming its annual output was expected to be just 20m units, half of what it had initially planned. Another report, from Bloomberg, claimed that Apple was forced to remove some quality control elements from its production line in order to increase output to an acceptable level. In an unusual move, Apple specifically denied that report, saying the claim “that Apple has reduced the accuracy spec for Face ID is completely false”.

From the article: The iPhone X rapidly selling out may not be entirely good news for Apple. Comment: wow, do analysts/journals ever give up on trying to find negative news about everything?

A reader asked about the Enerplus wells in Spotted Horn oil field. My observations:
Disclaimer: this was done quickly; not double-checked. If this information is important to you go to the source at NDIC.