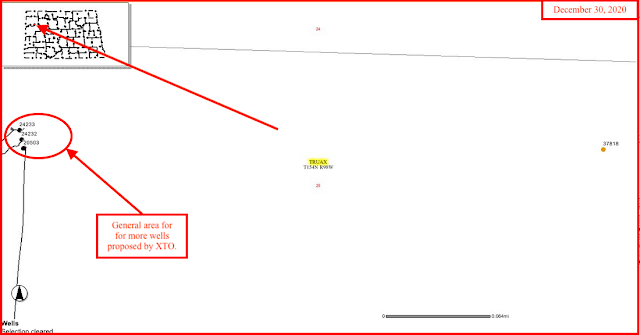 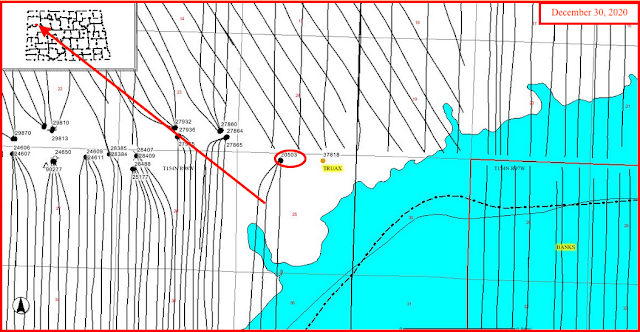 The producing wells in the graphic:

The confidential well in that graphic:

This is a great well to study to get an understanding of how operators manage their assets in the Bakken. Be sure to look at the recent production:

January 23, 2022: the Slawson Muskrat Federal wells are starting to come off confidential list this next week; 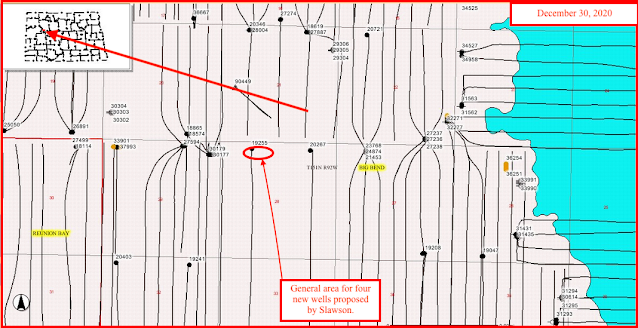 The other two wells in this section:

And this section line well:

Wow, what a great night. TCM: The Birds, followed by Psycho and that followed by Cape Fear. Wow, wow, wow. Is this the first time I've watched all three from start to finish?

Best news: apparently it's a full trading day tomorrow. The last day of the year. Should be fun to watch.

Scrooge: Mitch McConnell. Good, bad, or indifferent, a lot of folks are going to be thrilled when Biden is sworn in and for them, it will be the cherry on top if the Dems sweep Georgia. [Despite my cynicism, I actually think McConnell knows what he is doing.]

ExxonMobil on the cusp. In the same boat as Saudi Aramco:

I've been thinking about "this" for the past year but I am unable to articulate it, so I cannot post my thoughts, and generally, when I get too far in front of my headlights, I get a fair amount of pushback from anonymous experts.

I have a thin skin. I don't like the pushback, so I generally try to stay "within my headlights."

We're currently in "Bakken 4.0." It's very possible we move to Bakken 5.0 if the following four "things" converge as expected:

This post looks at the new BR permits as perhaps the post we will come back to a year from now to demonstrate how things evolved in the Bakken if, in fact, we move to Bakken 5.0.

Then look at this old Chuckwagon well: 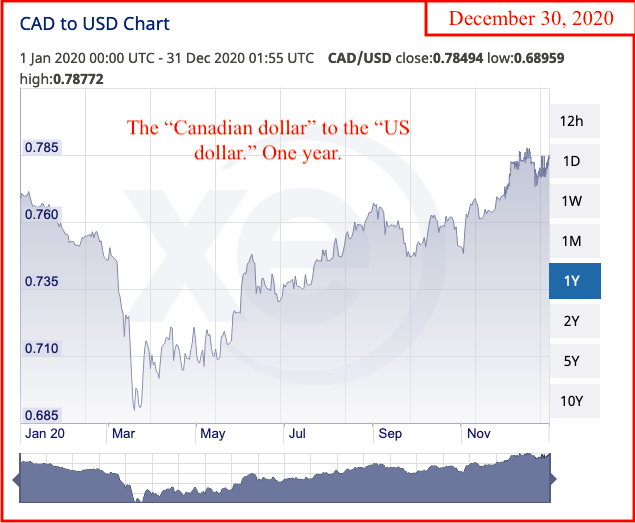 For the US dollar, "90" has seemed to be the floor and dropping below "90" will be a topic of conversation on CNBC. Today, the dollar dropped below "90," apparently settling at about 89.5. Link here.

One can argue that the recent rise in the price of WTI is simply tied to the weakness of the dollar.

The ten-year chart may be somewhat reassuring but I'm not sure. 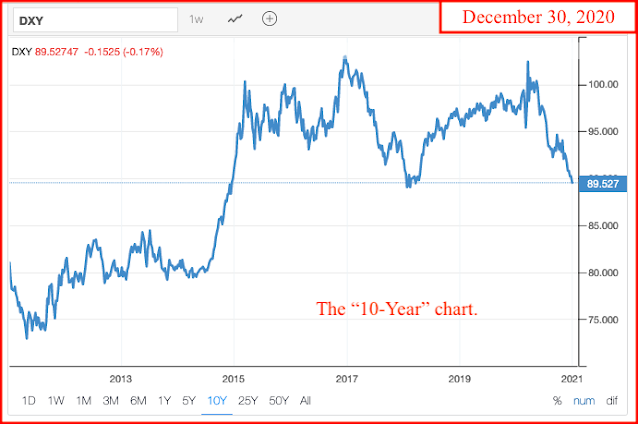 Does anyone seriously think the price of oil will fall under a Biden administration? If nothing else, the falling dollar will mean higher commodity prices. 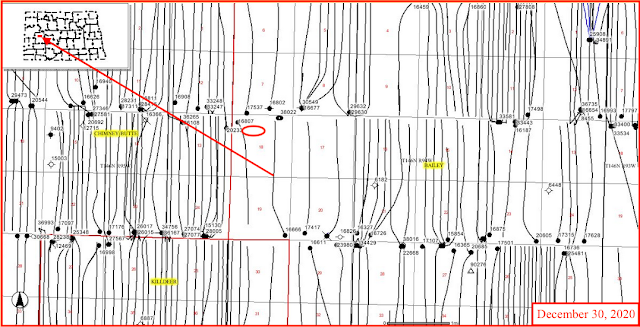 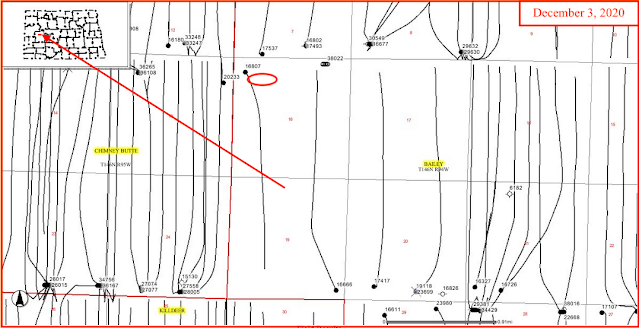 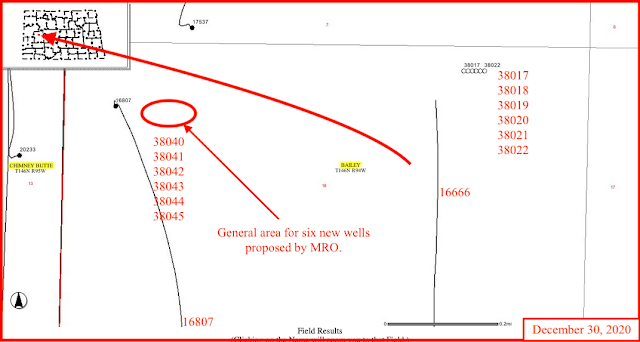 Posted by Bruce Oksol at 4:33 PM No comments:

AAPL: this is really, really cool. AAPL hit its "buy point" a couple of days ago, but then it moved back. What's going on? Investors are selling a bit of AAPL for various reasons:

Investors should love this:

American firepower: must drive them (the "bad guys") nuts. 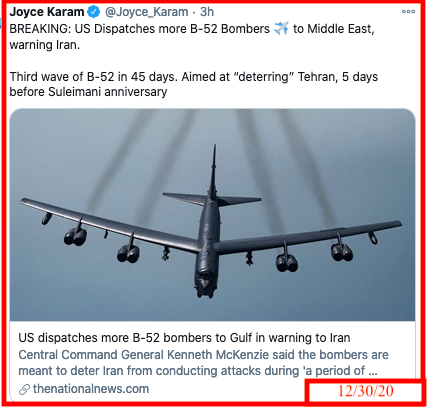 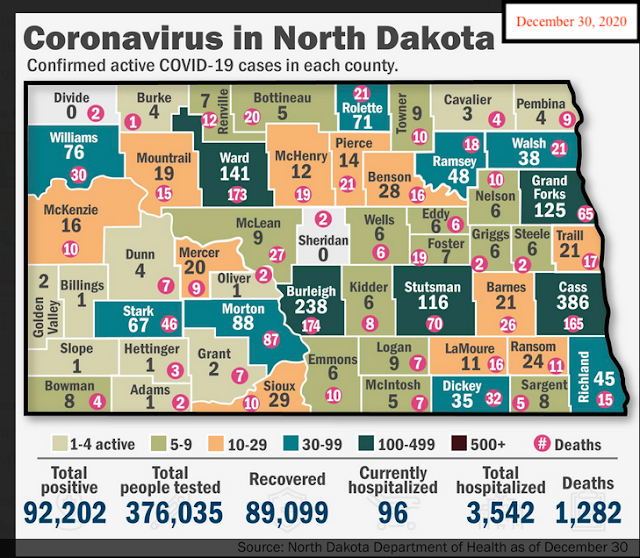 Hitchcock's The Birds is on TCM tonight. I don't know if I've ever watched the whole movie; the whole premise seemed ridiculous. But here I am, watching the big screen movie on the little screen.

How could I miss this? Suzanne Pleshette.

As gorgeous and as wonderful Pleshette was in the Bob Newhart Show I was stunned by how Elizabeth-Taylor-esque Pleshette appeared standing in the doorway early in the movie.

Seventy years old. My wife and I are fortunate to have made it to the same age in good health. If you have it, never take your good health for granted. It's a wonderful gift.

Posted by Bruce Oksol at 1:47 PM No comments: 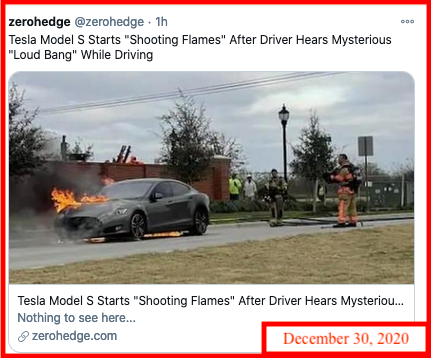 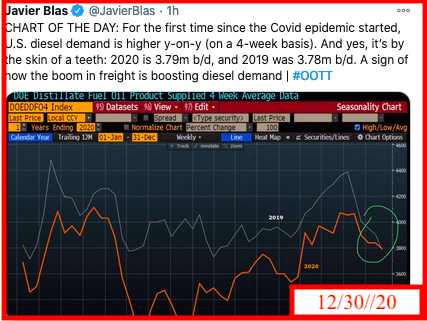 A quick look at the numbers suggests the big story is distillate fuel inventories. I did this quickly and there may be errors but this is my spreadsheet:

Note how down the change is "relative to the five-year average. Again, if I have this wrong, "focus on fracking" will sort it out Sunday night. 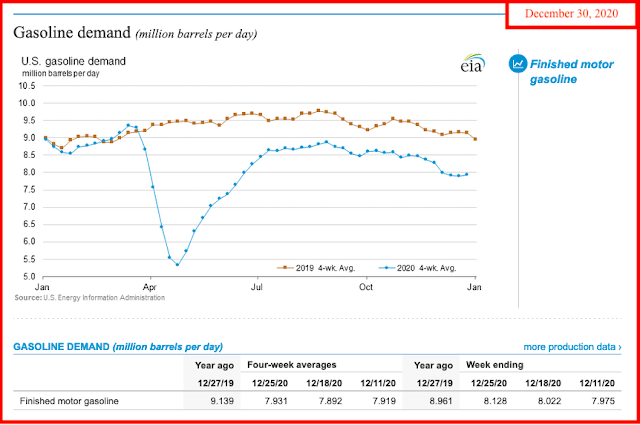 The flight out of New York has been in the works before the pandemic. Wall Street executives previously relocated thousands of jobs to states outside of New York, in an effort to cut costs.

We will get a better feeling for the extent of these re-locations when we start to see stories late next year coming out of NY state and NYC about declines in tax receipts, both corporate and individual. You can bet that many NYC workers when allowed to work from "home" are moving "home" -- that is, to states with less onerous taxes. And frankly, less expensive to live in general.

Speaking of which, I still have financial attachments to banks in North Dakota, one in Grand Forks and one in Williston. The individual with whom I work at the Williston bank is now working from "home." I always assumed Williston was her home. Wrong. She continues to work for the bank in Williston, ND, but she is now back "home" in Idaho. I find that amazing, and I also find that incredibly progressive of the bank to allow her to do that.

This seems a good time to post this video again. I just noticed: this was released in 1969 which I argue is the most impressive year for music ever.

A Wanderin' Star, Lee Marvin
Posted by Bruce Oksol at 6:03 AM 2 comments:

Amazon: is tracked here. From a reader, this link, "Amazon is actually the American worker's champion. Link here.

It's been a terrible year for the American worker, with a notable bright spot courtesy of one of the tech firms in the crosshairs of regulators and lawmakers.

If someone had said early in 2020, "A company is going to hire hundreds of thousands of non-college-educated workers during the pandemic at well above the minimum wage," you'd think there'd be huzzahs all around.

That's what the online retailer Amazon has done, but it still gets brickbats for how it pays and treats its workers. Rep. Alexandria Ocasio-Cortez said the other day that Amazon jobs are a "scam."

If so, a swath of the US workforce is falling for the grift. Since July, the online retailer has hired 350,000 workers and now employs 1.2 million people globally.

This is a historic hiring binge. According to The New York Times, "the closest comparisons are the hiring that entire industries carried out in wartime, such as shipbuilding during the early years of World War II."

On top of this, the company provides work for roughly half a million truck drivers.

[Comment: and a surge in Class 8 truck manufacturing. Previously reported. In fact, one begins to wonder what the US economy would be like if it were not for Amazon.]

Schwab: the move is official January 1, 2021. Link here. By the way, long before this move, Schwab operations was located in El Paso, TX. This new headquarters in Denton County is pretty impressive, literally just a few miles down the road from where we live. Can't wait to take a tour. LOL. 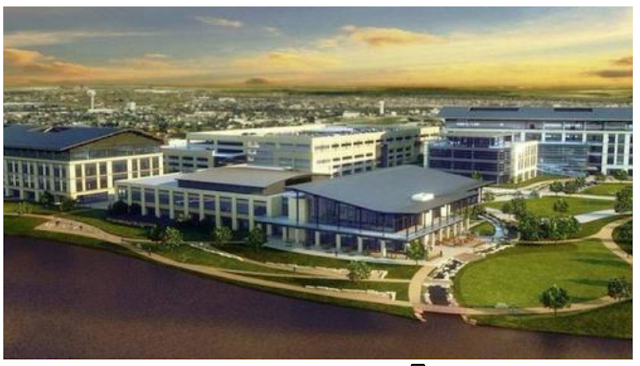 Not that long ago, the global LNG market was reeling from the effects of the pandemic: stunted demand, severe oversupply, brimming storage, and record low prices, all of which led to a squeeze on offtaker margins and mass cancellations of U.S. cargoes.

Within a matter of months, however, the market has done a 180. Global supply has tightened significantly as cargoes can’t get delivered fast enough, and international LNG prices are near two-year highs.

U.S. LNG exports and domestic feedgas demand are at record highs in December, for the second straight month. That’s not to say U.S. LNG producers and the domestic gas market are out of the woods.

Cancellations are rearing their heads again — not because the demand isn’t there, but because of logistical constraints and a severe vessel shortage, which are injecting more uncertainty into the market. Today, we provide an update on domestic LNG exports and the immediate factors driving them.

Posted by Bruce Oksol at 5:21 AM No comments:

Notes From All Over -- Very Early Morning Edition --Top Story Of The Year: The Eradication Of "Seasonal Flu" In The US -- December 30, 2020

December 30, 2020: something that is not being widely reported and something for which President Trump is getting no credit -- the eradication of "seasonal flu" in the US. 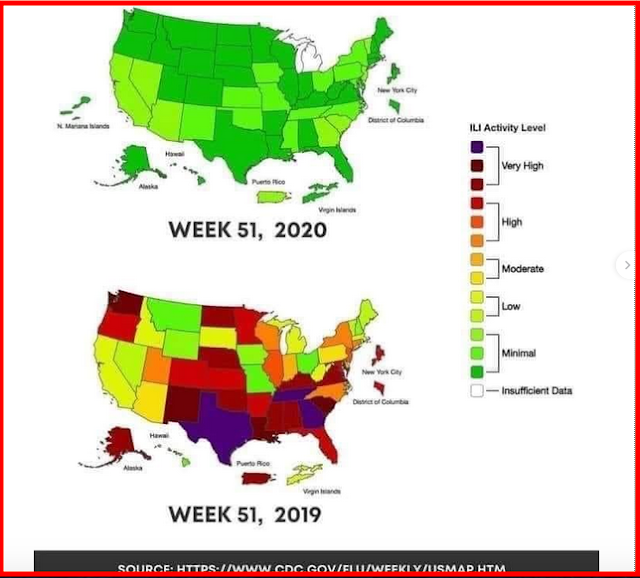 No way is Japan going to allow thousands of athletes and tens of thousands of fans to enter their country for the 2020ne Olympics unless global vaccination is incredibly successful.

And Japan and Taiwan were recently doing so well. 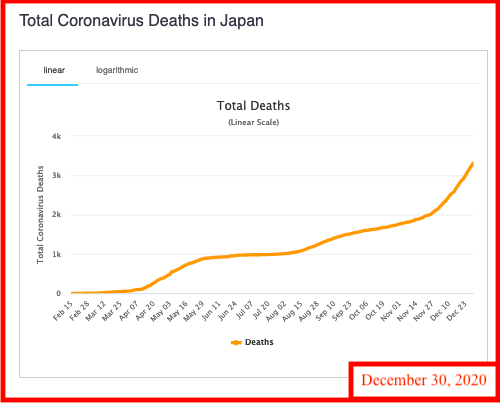 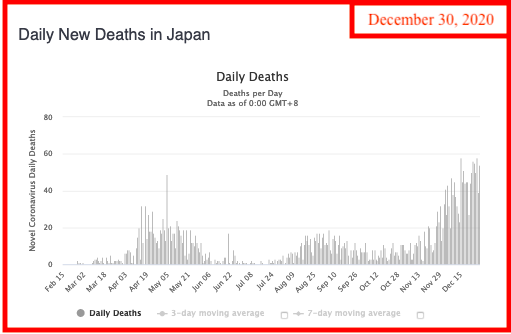 US government says airlines can ban emotional support animals from flights. Multiple links. Forbes was reporting on this as early as January, 2020. It appears Alaska Airlines will be the first major airline to change its policy: no more comfort animals on flights: only authorized, validated service animals.

I don't know if I mentioned this on the blog; I mentioned it to a reader in an e-mail. On my recent return trip from Portland, OR, to Grapevine, TX, on Alaska Airlines, my row, six seats, middle seats unoccupied, four passengers and two huge dogs. Both very well behaved. I had no problem with them. But it was obvious these were not support animals. Their owners were simply bringing them along as non-paying "passengers."

Thank goodness for that empty middle seat. My hunch is that Alaska Airlines realizes that when flight operations get back to normal and that middle seat is occupied, there's no way large dogs can be accommodated. In my case, fifty percent of my row had passengers with large dogs.