With NFL-free Sundays and these incredibly boring NCAAF bowl games (right now Ohio State is demolishing USC 24 - 7), this is as good a time as any to take a look at DOT highway projects in the Williston DOT district. This includes the Watford City transportation plan. My understanding is that the four-lane divided Lewis and Clark bridge over the Missouri River southwest of Williston is now complete but the ND DOT suggests there is still a bit more to do. Either that, or their website has not been updated.

These projects give one an idea of all that's left to do:
Another reminder: a nice site for locating / updating US natural gas and crude oil pipelines. The bad news: the site appears not to be updated. I am not sure it is even active any more. It looks like its last update was back in 2015. If so, it's still a nice summary for archival purposes.
Posted by Bruce Oksol at 10:13 PM No comments:

Great read over at SeekingAlpha. I don't have time to comment but important enough to get it posted. The comments at the article are just as important. Will archive.

This is simply extraordinary. Unless Saudi Arabia oil is "special" (and, of course, it is not), US refiners have found alternate sources for Saudi oil that used to be imported. Saudi does have its own refinery in the US and will want to keep supplying that refinery with their oil, but unless there's something special about Saudi oil ... oh, I guess I already said that. Link here. 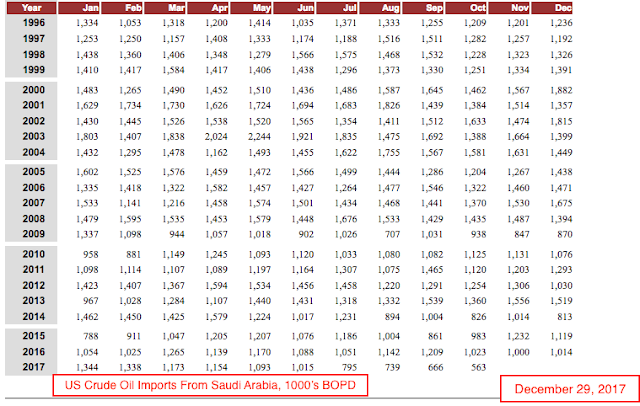 One needs to go all the way back to the 1980's to see such little Saudi Arabian oil being imported into the US.

By the way, making this data even more interesting, OPEC imports actually increased month-over-month, suggesting that even as Saudi Arabia is cutting exports to the US, OPEC, overall, has a more spotty record.

So, quick: who exports more crude oil (and petroleum products) to the US: Russia or Saudi Arabia. One may be surprised at the answer. Obviously, it is Saudi Arabia, but the amount if not particularly different: 18 million bbls/month (Saudi) vs 11 million bbls/month (Russia), assuming I'm reading the tables correctly.
Posted by Bruce Oksol at 9:01 PM No comments:

Unless you've been living under the Geico rock, you know that the US is experiencing one of the coldest early winters on record. It's been fascinating watching the grid in New England, a region where CAVE dwellers have adamantly opposed natural gas, instead, apparently, preferring oil to produce electricity. Previous posts include this one. That's an important post because it provides a bit of an explanation why oil might be preferred over natural gas in New England (and it doesn't have to do with the environment). But I digress.

A reader pointed out that when electricity demands are at their greatest, the region maxes out on nuclear, coal, and natural gas. Ever-increasing amounts of oil are required. I had not noticed that until the reader pointed it out, and, subsequently, a writer over at Forbes also noted the same thing.

Now, a new wrinkle. In the graph below, note that when electricity demand was at its greatest:
nuclear and coal maxed out; natural gas was likely soon to max out (based on earlier data); and,
when the region most needed additional sources of electricity, electricity from renewable sources actually decreased significantly. Perhaps overcast conditions/cloudy weather degraded solar sources; and, high winds/cold degraded wind farms. Dynamic link here. 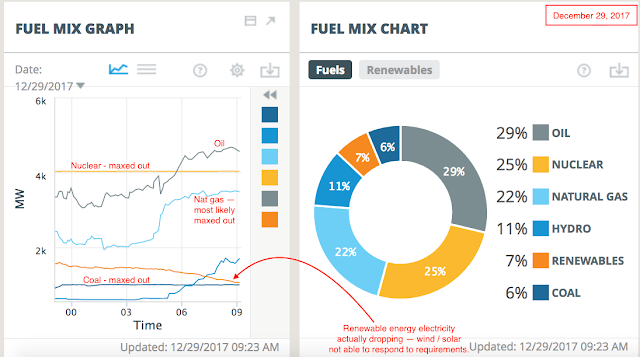 Here is the spot price of electricity ($285/MWh) just when the region needed electricity most, and renewable energy was  unable to provide the extra electricity needed.

And, of course, it should be noted, that whatever renewable sources are there, it all has to be backed up by conventional sources, such as oil, coal, or natural gas -- and the back-up has be available immediately, so the coal, natural gas, oil is burning just to keep back-up ready to go as soon as it's needed. 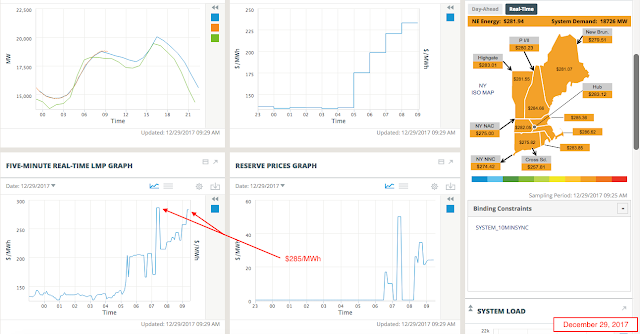 
No new oil and gas permits.


RBN Energy: a review of the top 10 RBN Energy prognostications.
Posted by Bruce Oksol at 7:23 AM No comments: