From Reuters, note the last paragraph:


"If we get to a point where we feel frustrated by a deliberate action of shale producers to just sabotage the market, OPEC will sit down again and look at what process it is we need to do," said Nigerian Oil Minister Emmanuel Kachikwu.

By the way, for those who have forgotten (I had), Mark Papa is CEO of Permian oil producer Centennial Resource Development Inc:


Some OPEC members seem keen to show they have shed any prior naivete about shale, making it a key topic during Thursday's meeting after barely mentioning it before. Shale's limitations, including rising service costs, also were discussed.

"We had a discussion on (shale) and how much that has an impact," said Ecuador Oil Minister Carlos Pérez. "But we have no control over what the U.S. does and it's up to them to decide to continue or not."

Mark Papa, chief executive of Permian oil producer Centennial Resource Development Inc, was asked by OPEC delegates to give a presentation on shale's potential last week. He appeared to have played his cards close to his chest.

"In terms of the threat, we still don't know how much (U.S. shale) will be producing in the near future," Nelson Martinez, Venezuela's oil minister said after the talk.

From an Investor's Business Daily op-ed:


Despite cuts in oil output and threats of even more, the OPEC cartel can only watch in disappointment as prices for crude defy their efforts to raise them. Credit fracking for the cartel's loss of power over the world market.

These are desperate times for OPEC. On Thursday, oil prices plunged nearly 5% when it became apparent OPEC wouldn't cut output further, which would have put a serious dent in members' finances. Instead, the cartel will extend current cuts for nine more months.

In essence, they're declaring victory and going home.

Just three and a half years ago, the price for a barrel of West Texas Intermediate crude peaked at $110.62 a barrel. At the time, President Obama was pushing Americans to conserve and warning, "we can't drill our way out of the problem."

Turns out, we could. Today, oil prices are struggling to rise above $50 a barrel, thanks in large part to vast new supplies of crude on the market from American frackers. They've used technology to dramatically slash costs, so OPEC can no longer control the global market price.


Global oil prices were in a deep slump. And because oil profits lubricate the Russian economy, the Kremlin was casting about for a solution. So Russia’s leaders set politics aside and cut a deal with Saudi Arabia: Russia agreed to join the Organization of the Petroleum Exporting Countries on a production cut, with the intent of lifting global oil prices.

On the face of things, the agreement worked: Prices picked up, and along with them the cost of gasoline and consumer goods in developed countries.

There was just one catch: Russia, in fact, did nothing.

“There was a beautiful public relations effect,” said Aleksey I. Turbin, at the time a senior official at the Ministry of Energy who helped negotiate the deal with the Saudis.

That was 16 years ago, but once again, an oil-dependent Kremlin is, if not exactly desperate, at least eager to prop up prices, and again questions abound on whether it is serious about cutting output or just assembling another public relations effort.

I guess I forgot about this poll. Whatever. The poll: good, bad, or indifferent, your thoughts on "special counsel" to investigate the "Russian thing":
Interesting: most "evenly divided" poll I've seen in a long time.
Posted by Bruce Oksol at 9:37 PM No comments:

June 1, 2017: Trump announces the US will run, not walk, away from the Paris climate accords.

Rumors are that Trump will walk away from Paris / Kyoto. 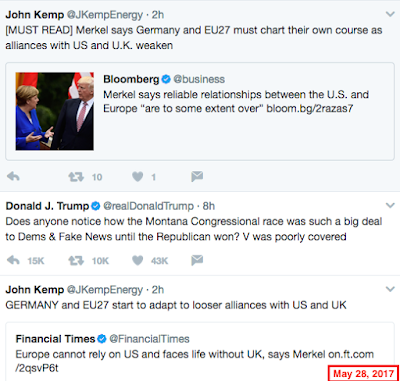 In my mind, I still think there's a 80-20 chance that Trump will stay engaged with Paris / Kyoto on global warming, but these are the tea leaves suggesting he has made up his mind:
A couple of data points that still give me pause:
As far as I can tell, Trump came back from Europe with exactly "no" wins. From Saudi Arabia and Israel, he came back with a wheelbarrow full of wins.

By the way, looking back the at the stories, the photos, the results, something tells me Trump enjoyed the first part of the trip a whole lot more than the second part of trip.

Worse, it wasn't even alphabetical.

Data points from US National Weather Service:
US drought monitor.

Memo to self: e-mail link to Algore. 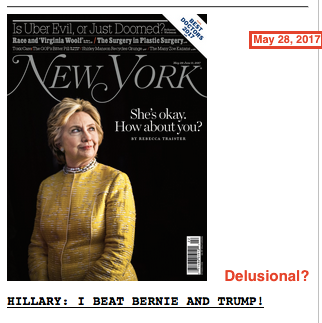 This is the link: http://www.natgeomaps.com/trail-maps/pdf-quads.


National Geographic has built an easy to use web interface that allows anyone to quickly find any 7.5 minute topo in the contiguous U.S.A. for downloading and printing. Each topo has been pre-processed to print on a standard home, letter size printer. These are the same topos that were printed by USGS for decades on giant bus-sized presses but are now available in multi-page PDFs that can be printed just about anywhere. They are pre-packaged using the standard 7.5 minute, 1:24,000 base but with some twists:

Page 1 is an overview map showing the topo in context

It's incredibly easy to use. Once you get to the site, click on the map of the United States and keep zooming in on the area you are interested in. You have to zoom in several times to get to the "red" pointers. Click on the "red pointer" and begin exploring.

And, yes, the link has been added to my "Data Links" page.
Posted by Bruce Oksol at 11:53 AM No comments:


Is EOG Resources the Apple of oil? IBD seems to think so and with good reason. Oil recovery has become a science with the advancement of shale. This is the reason for the large discrepancy in initial production rates by operator. Conventional vertical production did require proficiency. This proficiency may have been more about geology than technology. US operators continue to pester OPEC with better economics.

Although decreased costs are touted, improved recoveries will drive the industry.

EOG is even using Apple technology, including the iSteer smartphone app. It is using precision targeting as well. EOG has real time data streaming from every asset. It applies proprietary algorithms with in-house software. It also uses over 65 in-house desktop and mobile software applications. EOG also applies data science to optimize completion design to specific geology. These are just a few of the ways that EOG continues to outperform. More importantly, we would expect other operators to match this performance in the future.

The Delaware Basin may be better than Midland. We have continued to be bullish this play as production per foot has consistently outperformed. This has been seen with a lower inventory of wells turned to sales. The bullish narrative gets better when we look at EOG results. Focusing on northern Loving County, Texas and southern Lea County, New Mexico provides a visual to why there is so much activity in the area. From March of 2016, 135 horizontal locations have been completed. 74 of those wells are owned by EOG.

Much, much more at the link.
Posted by Bruce Oksol at 11:33 AM No comments: