As a lead-in to this next post, I was looking for a "Canadian song." Funny how things turn out. I did not know this. Judy Collins' most famous song (?) Some Day Soon was written by Ian Tyson -- one half of the Canadian duo Ian and Sylvia.

I posted another note about this very same story just a few days ago. But that was before XOM wrote of its entire western Canadian investment. Wow, wow, wow.


Oil-sands investments in Western Canada that gobbled tens of billions of dollars over the past decade are proving an Achilles heel for some of the world’s biggest energy producers.

Exxon Mobil Corp. slashed proved reserves the most in its modern history after removing the entire $16 billion, 3.5-billion-barrel Kearl oil-sands project from its books on Wednesday.

That followed ConocoPhillips’ announcement a day earlier that erased 1.15 billion oil-sands barrels, plunging its reserves to a 15-year low.

While prolific shale plays in Texas and Oklahoma are going through an investment boom with oil above $50 a barrel, the oil sands have fallen out of favor. Current investments in the region amount mostly to long-planned expansions by large Canadian producers like Suncor Energy Inc., while majors like Statoil ASA have sold assets. Suncor, which took over Canadian Oil Sands Ltd. less than a year ago, is down more than 3 percent this year in Toronto.

The oil-sands operations in northern Alberta are among the costliest types of petroleum projects to develop because the raw bitumen extracted from the region must be processed and converted to a thick, synthetic crude oil.

In addition, Canadian crude sells for less than benchmark U.S. crude because of the added cost to ship it to American refineries and an abundance of competing supplies from shale fields. That’s why the oil sands have been particularly hard hit by the worst oil slump in a generation.

The combined 4.65 billion barrels of oil-sands crude removed from Exxon’s and Conoco’s books are worth $183 billion, based on current prices for the Western Canada Select benchmark. The revisions hit as both U.S. companies, along with the rest of the oil industry, strove to recover from a 2 1/2-year market slump that collapsed cash flows, wiped out hundreds of thousands of jobs and prompted many explorers to cancel their most ambitious drilling programs.

Of course, now that production is dropping -- and dropping precipitously -- in western Canada, "peak theorists" will tell us that, yes, indeed, another sign of peak oil, as oil production is falling, just as predicted by M. King Hubbert predicted.

Peak oil? What peak oil?
Posted by Bruce Oksol at 11:30 PM No comments:

For this well,
Monthly production for past few months:

"It was a sad smile just the same." One of the best lines in song-writing ever.

A random look at the NDIC permits so far this year.

Posted by Bruce Oksol at 8:06 PM No comments: 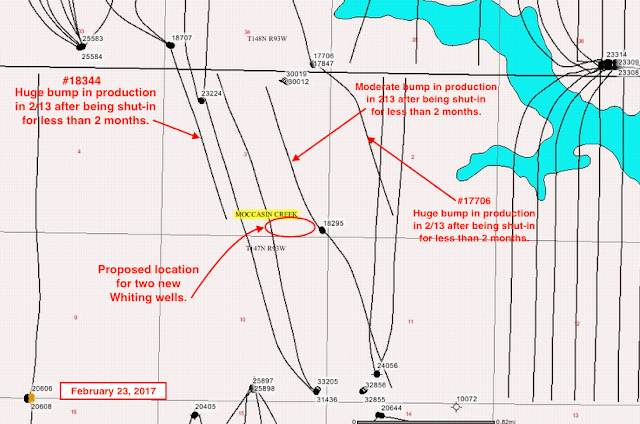 Actually this could also be reason #1, why I love to blog: the "things" my readers send me.

Years and years ago, during Bakken 1.0, I opined about the virtues of heel-to-toe horizontals being drilled alongside toe-to-heel wells (if that makes sense). At that time, early in the Bakken boom, operators were only drilling one well in each drilling unit (to get production to hold the lease) and no one was talking about heel-to-toe and toe-to-heel neighbors.

Then the slowdown in drilling so we didn't get many examples. But today a reader sent me a great example of what I'm talking about.

The well:
For full production data as of this date, see this post.

This well is in its sixth year of production. By now, it should have been well past the "dreaded Bakken decline" and past its most productive years, but look at this well's production in the past six montths -- again, this well is an "old" Bakken well -- it should be on its last legs. We'll come back to it later. 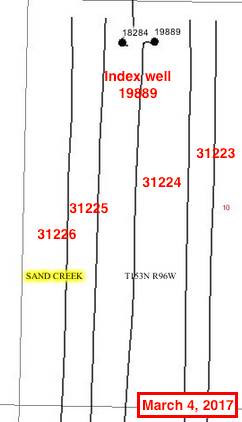 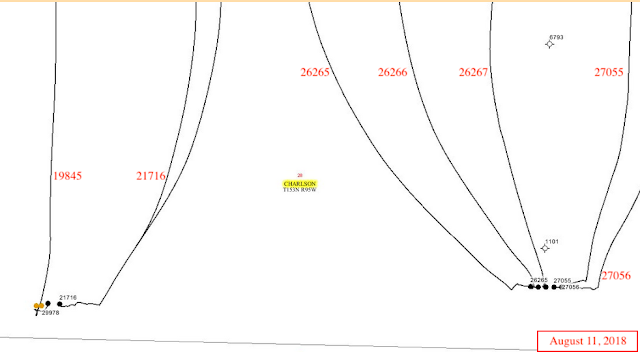 This is pretty cool. Earlier I posted a note on a Van Hise well. Today I got a nice note from a reader who is familiar with the area and the wells. He wrote:

That information is all in the public domain.

The reader reminded me of a photograph that he sent me years ago of the early wells, a Newfield Skaar Federal well. I don't recall if I ever posted that photo, but here it is: 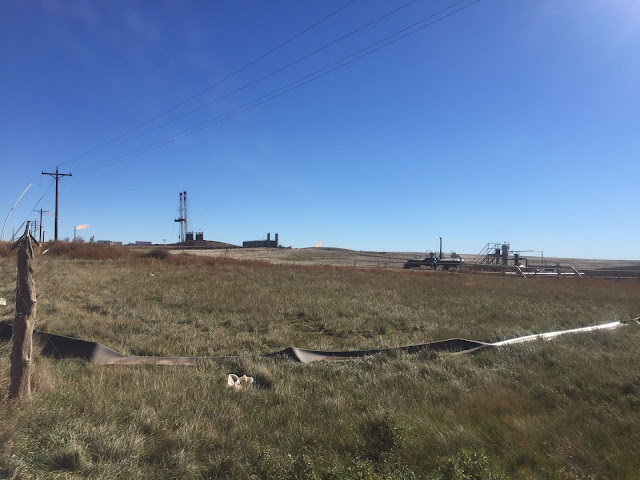 There are days I wish I could be back hiking in/on this prairie. Today is one of them.

Some thoughts:
This is the area under discussion: 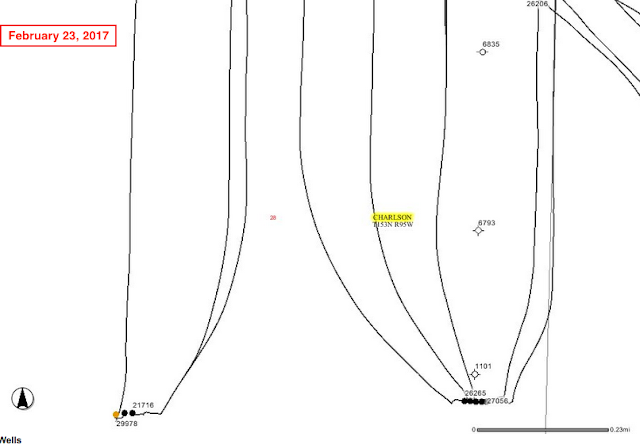 Crude oil reserves in US (from John Kemp via Twitter): 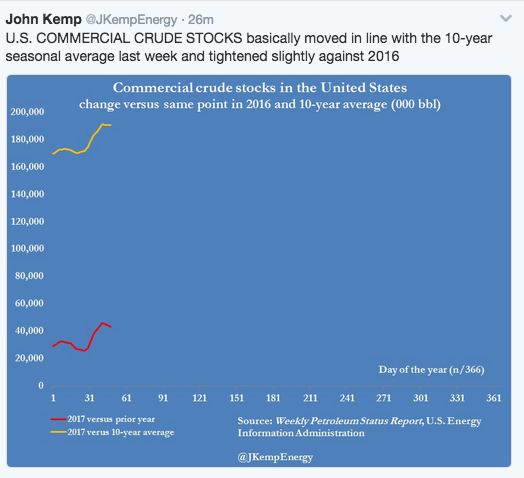 After tremendous builds the past two weeks (14 million and 9 million, consecutively) the build this past week was 0.6 million, essentially flat. Crude oil imports were down significantly. I guess that's why WTI is trending up today. US gasoline demand rose but still well below last year at this time.
Posted by Bruce Oksol at 10:39 AM No comments: 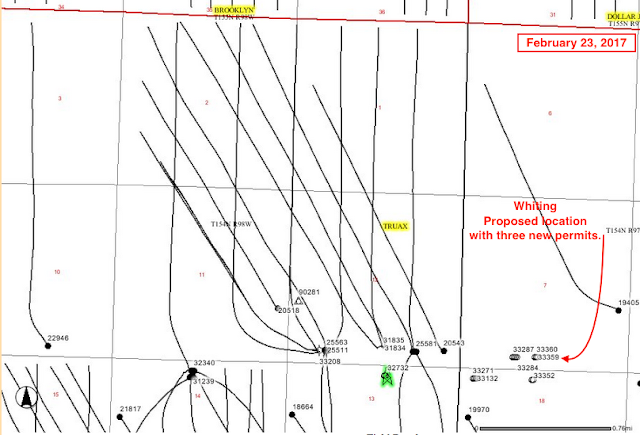 One well came off the confidential list:
Petro-Hunt has five wells approved for "tight hole" status.

Another sad note: Alan Colmes dead at 66. Very, very interesting background, family history. I vaguely remember watching him with Sean Hannity but I never enjoyed the show all that much. But so sad to see someone with so much vitality dying at age 66. Just one more reminder to live every day to its fullest. Cancer, again.

Will we have ten consecutive days of record setting Dow? One word: yup!

Who wudda ever guessed? Folks asking if Oklahoma has enough natural gas processing for all fossil fuel coming out STACK and SCOOP.

NYSE:
Late morning: market melting up; up about 30 points.

Separate but equal? Okay if #BlackLivesMatter.

Impeachment: likely DNC chairman-select says there is now "enough" to impeach President Trump. This is all about dollars and donations.

Four predictions:
I'm serious: was there any prediction in 1970 that panned out?


The Tahoe-area resort has seen some 565 inches of accumulative snowfall this season. That's over 47 feet.

"In 2017 alone, since January 1, we've had 460 inches," said Sam Kieckhefer, a spokesperson for Squaw Valley Alpine Meadows. "Our season average is 450 inches. We received more snow since the start of 2017 than our average season."

Kieckhefer added: "We are 91 days into our season, and we're expecting to operate on July 4 and so that means we're not even halfway done with the season."

Yes, there's a story behind all this. Maybe for a later date. 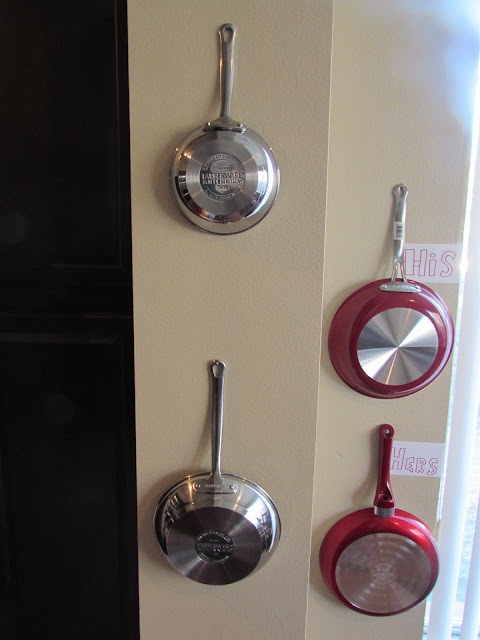 Posted by Bruce Oksol at 7:54 AM No comments: