And I'm calling it a night also.

Good luck to all, tomorrow.
Posted by Bruce Oksol at 11:49 PM No comments:

Idle Rambling Comparing Two Wells That Were Not All That Great Early On -- Then Their Production Diverged -- February 26, 2017

This is going to be a long note. It is likely to be confusing. It may not be worth the effort. In a long note, there will be factual and typographical errors. If this is important to you, go to the source.

These are two QEP wells very, very close to each other and drilled about the same time. They both had similar births. One died early; one is still alive.

The first QEP well; it may have been killed prematurely; it was never all that good to begin with; its production was about 1,000 bbls of oil/month when it was killed (PA). Monthly production data shortly before it was killed:

The second well was drilled/completed/tested at almost the very same time, in early 2008.

But it was allowed to live.

I do not know why well #1 was killed and why well #2 was allowed to live. That's unimportant now.

The question is whether well #1 could have come back as strong as #2 came back after it, too, looked like it was never going to do all that well. 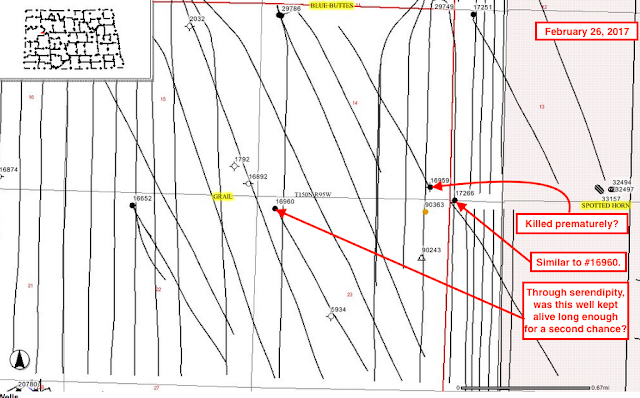 
Original Post
Originally, this was a Three Forks well, lateral #1. Shortly thereafter, it was re-entered, and lateral #2 was drilled, targeting the middle Bakken. There were drilling problems with the second lateral and it was very, very short but the geologists opined in their report that it was still likely to be a great well. Re-entry rig began work September 27, 2007.
The two laterals (the lower lateral was the first lateral drilled):
No evidence this well was ever re-fracked (see FracFocus).

From a sundry form:

Production profile for this well:

In the other graphic below, the other well of interest is:
Monthly Production data: 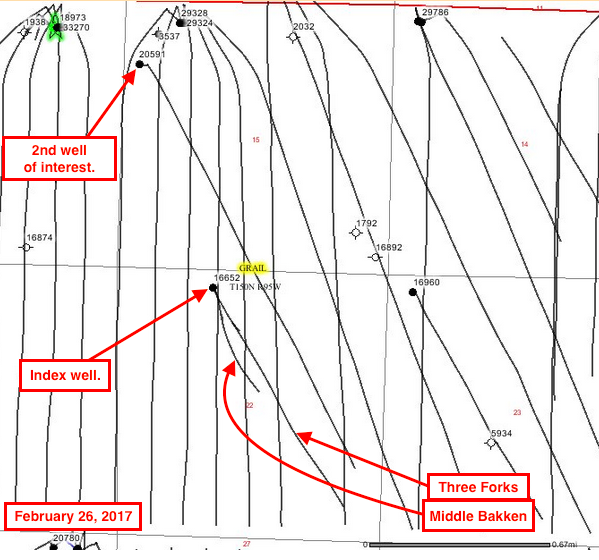