The Bakken: a swing producer. You can't do this with off-shore wells. Link here. 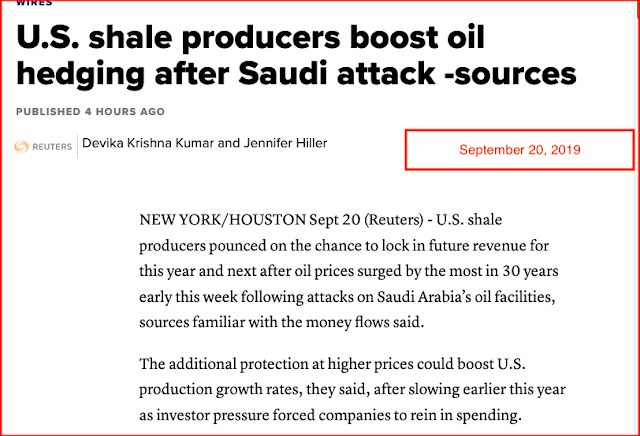 This Is Absolutely, Positively, Not Happening InThe Bakken -- September 20, 2019

The note below is pretty much complete; there may be some fine tweaking but consider it done.

This is interesting. I had not thought of this. Because there is so little national news regarding the Bakken and because the Permian is getting all the press, a lot of folks outside the region mistakenly think the Bakken has completely slowed down. An operator looking for capital among investors (east coast, west coast) were surprised to hear that the Bakken was still very, very active. Potential investors were surprised to hear that North Dakota was producing as much oil with 50 - 60 rigs as the state was producing (actually more) than when there were 200 rigs in the Bakken (lousy grammar on my part).

So: the number of rigs does matter when it comes to "demonstrating" activity (and perhaps investor interest). That driller, by the way, suggests that North Dakota would likely produce upwards of 2 million bopd in about three years. If the takeaway capacity was sufficient and the price "right," I think we could be at 2 million bopd now.


Regarding the linked articles below: Basic concept, not news. Poorly explained (some mistakes).

Also, despite the shift to closer spacing [in the Bakken?], we are still not seeing a dropoff in performance. Obviously there must be other aspects that are improving and the net result is okay, on average.

I'm in a rush right now so I will have to come back to this, but this is so not happening in the Bakken.

First of all, it's an old story regarding the Permian, previously posted on the blog, but both Bloomberg and oilprice make it sound like something new.

From the linked articles: 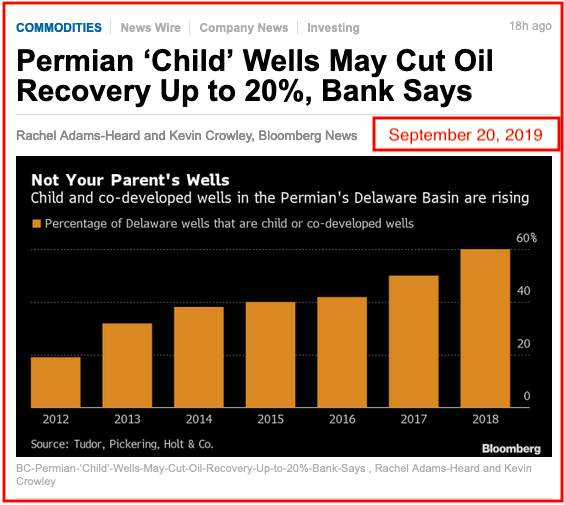 But whatever. It's not happening in the Bakken.

I don't have the statistical analysis, but I have the anecdotal evidence to make that statement. But Whiting does. Exhibit A: 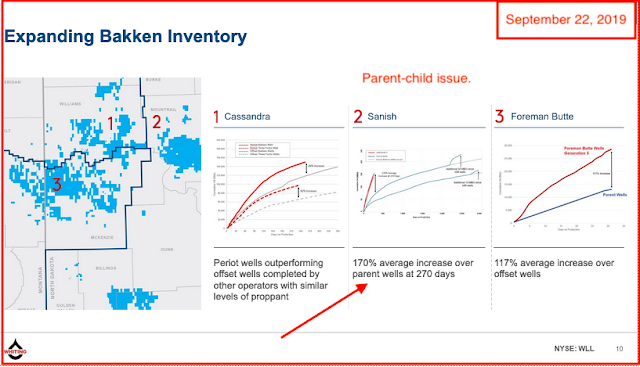 I don't know the Permian at all. I follow it a little bit and have noted a few things. Most important(ly): it appears unconventional / shale basins are not all alike.

I am inappropriately exuberant about the Bakken, so everything that follows, take with a grain of salt. This is my worldview of the Bakken vs other shale plays, particularly the Eagle Ford and the Permian.

First, I think the Bakken is still going to be the best of the three plays (Bakken, Permian, Eagle Ford) in these categories:
Now, with regard to the linked articles above, that "child" wells are a challenge in the Permian. It appears to be quite the opposite in the North Dakota Bakken (I can't speak to the Bakken in Montana and/or Saskatchewan).

It certainly appears the operators have figured out the "Goldilocks" density, although even that will change / improve over time.

It appears that in Tier 1, middle Bakken, six wells in 1280-acre spacing will be the norm.

It appears that in Tier 1, first bench Three Forks, six wells in 1280-acre spacing will also be the norm.

All other tiers and all other Bakken formations, the jury is still out.

To see examples of well density in the Bakken, click on the follow tags:
Years ago I noticed the positive impact that "child" wells had on their parents and on their sibs. I have blogged about that often. An analyst / research student working for Halliburton telephoned me years ago to discuss this with me (he called me; I didn't call him).

I devoted an entire site to these "wells of interest." At the index to that site, one can see all the examples of the positive impact of "child" wells. I think at one time they were called "daughter" wells, but I don't recall for sure. The list of wells has gotten so long, I've pretty much quit doing that. Whether I've "proved" the point or not to others bothers me not at all. I believe what I see.

The Bakken is a bit easier about which to generalize. For the most part, when we talking about the Bakken now (2014 - 2018) we are talking about one formation, about 20 to 40 feet thick, pretty much being fracked about the same by all operators.

I have no clue about the Permian but it's my understanding the unconventional target formations in the Permian are many and they are thick. So, when I see a Bloomberg article with so much generalization it makes me wonder. If I were following the Permian or interested in the Permian I would want to know a lot more specifics.

They used to talk about the Bakken development being like a baseball game and early on we were only in the first inning. No one makes that analogy any more but I would guess we might be in the third inning.

The Permian? Easily the first inning, maybe the bottom of the first inning. But that's it. Based on what little I know about the Permian it sounds like there is a lot to learn. My hunch is that the operators have gone after the absolutely easiest stuff to lift.

Oh, a random note: in the Bloomberg article they talked about "dry" wells in the Permian. That's interesting. Hitting a dry well in the Permian has to be concerning. There are no "dry" wells in the Bakken. We've talked about that before. Yes, some wells are reported as "dry" but that's because of a failure of the well itself, usually a failure in the cementing / casing process. But if the well is completed in the Bakken it will strike oil.

It may not be an "economic" well but we've discussed that also. But it won't be dry.

I have yet to see more than a handful of recent middle Bakken wells abandoned due to low oil production.
Posted by Bruce Oksol at 12:52 PM 2 comments:

The "heat map" for the Williston Basin can be found at this link.

I would put Oliver field into the Tier 2 basket but it looks like the Oliver field may be closer to a Tier 1. You know, having said that, all this stuff is relative. The Tier 1 fields will "get better" going forward with better technology, more experience, etc., so maybe Tier 1 fields remain the same and Tier 2 fields remain the same. It's just that Tier 2 fields will now look as good as Tier 1 fields in the early days of the boom. Idle rambling, but I don't think one can put the Oliver oil field in the same tier as the Parshall, or the Grail.

Having said that, the Kraken wells in Oliver oil field are very nice wells.

See these recently released Kraken wells and note Kraken has seven more permits for the same location.
Posted by Bruce Oksol at 10:14 AM 4 comments:

Shortly after posting the North Dakota crude oil and natural gas production data for July, 2019, in which new production records were set for the second straight month, a reader wrote the following note. I've been so busy, I did not get around to posting it until today. I vividly recall these "oil drum" posts and I believe I linked them at the time. I was going to look them up, but never got around to it.

Again, this is from a reader after North Dakota posted new all-time production records:


An oldie, but goodie:


Because of the highly variable nature of shale reservoirs, the characteristics of the historical Bakken production, and the fact that per-well rates seem to have peaked, it seems unlikely that total Bakken production will exceed 2x to 3x current rate of 75,000 BOPD.

A year later he published another negative article, failing to specifically mention the previous fail.


Admittedly, I was a bit hasty in my prediction of peak rate. However, I will go out on another limb and say that 1 million barrels per day is going to be really tough, especially if the decline rates mentioned by a poster above are wide spread. Let's hope you're right and I'm wrong. If it did reach 1 million barrels per day, it would absolutely be "moving the needle" on national production." [In comments after being challenged.]

What a great way to start the morning. I had a great note from a reader regarding the attack on the Saudi export terminal and the oil field(s).

Debating whether or not to post the whole note, but here was my reply. One can probably guess the contents of most of the reader's note regarding the attack based on my reply:

2. I have had a similar note (without the Goldman Sachs angle) from another reader who is very, very knowledgeable about all of this.

3. The common thread between that reader and your note is the emphasis on MSB being squeezed. In fact, now, it's become so much worse -- less oil to sell, and possibly even buying oil on the open market (Iraq) to fulfill contracts and keep market share.

4. From a conspiracy point of view, I agree with you: the strike was incredibly surgical. And incredibly well-planned, timed. It seems like it was a perfect operation except for perhaps a few drones/missiles being duds. Comparing it to "Pearl Harbor"  -- which some in the media did (not you) was way "over the top" but it did have the timing, surprise, surgical components that "Pearl Harbor" had but not the consequences/effects (at least yet)

5. At the end of the day, though, no matter what motive one might come up with to explain this attack, none seem to have panned out:

The second biggest winner: US shale.

Timing: Both this most recent reader and I noted the same thing: the timing of the attack was most interesting. It came "immediately" after the heir to the Saudi throne fired the kingdom's minister of energy and replaced him with another member of the royal family, MSB's step-brother (one of hundreds, if not thousands, I assume). That may be where the answer lies. Nothing like giving the new minister of energy a huge problem at the beginning of his tenure.
Posted by Bruce Oksol at 7:58 AM 4 comments:

Email ThisBlogThis!Share to TwitterShare to FacebookShare to Pinterest
Labels: SaudiAttackSept2019

Data: a reader asked about production profiles from the NDIC site if one has the basic subscription ($50/year):
Wells coming off confidential list today --  Friday, September 20, 2019: 51 for the month; 183 for the quarter:
Active rigs:


RBN Energy: E&Ps boosting production despite sharp cuts to capital spending, part 2, or as I have said all along, rigs don't matter (don't take that out of context) -- archived.


You may not know it by the look of the S&P E&P stock index, which has been flirting with record lows in recent weeks, but exploration and production companies are continuing to defy the industry’s legendary boom-and-bust cycles by pumping out increasing volumes of crude oil and natural gas while slashing spending. Some types of E&P companies have fared better than others in this lower-price environment. How are they continuing to generate substantial production growth under sharply lower capital investment programs?

Today, we update our analysis of capital expenditures and production growth based on the second-quarter results of the 43 U.S. oil-focused, gas-focused, and diversified producers we track.