After the Nasdaq debacle Friday, it's hard to remember that the Dow closed at a new record high.

Disclaimer: this is not an investment site. Do not make any investment, financial, job, relationship, or travel decisions based on what you read here or think you may have read here.
Posted by Bruce Oksol at 9:50 PM No comments: Links to this post

A little excitement in Texas panhandle this past week:


Posted by Bruce Oksol at 8:22 PM No comments: Links to this post

December 26, 2019: wells have been completed; production data for past year;

December 10, 2018: production has been updated; see below; still on conf, but producing. 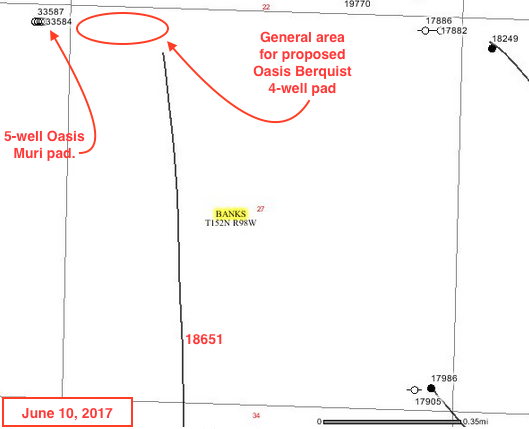 Posted by Bruce Oksol at 8:08 PM No comments: Links to this post

Making America Great Again -- US Beef Could Be In China By Next Month; Update On LNG Export Terminals In Texas -- June 10, 2017

Link over at Williston Herald. US beef had been banned since 2003 due to mad cow disease concern. New administration was able to get this reversed.


Original Post
US natural gas boom could snarl traffic at one of America's busiest ports -- Bloomberg.
Houston Chronicle has more in-depth article on size / activity of Port of Houston, as well as all the activity going on at smaller ports, including Port of Brownsville, Texas; and, Portland, Texas. At Brownsville:


... there's about $43 billion in projects in the works at the Port of Brownsville, including an LEED-certified steel mill, a pipeline that will cross into Mexico, and three liquefied natural gas plants. The port is also working to win Congressional approval to deepen its ship channel, from 42 feet to 52.


One of the biggest single projects is Cheniere's new 2,000-acre, $13-billion facility here in Portland. Over 4,000 construction workers are erecting a maze of steel beams, shiny stainless pipes and towering cement tanks, as well as two white-concrete export docks on the coast. The ship berths are almost fully dredged. And the company has a contract on adjacent land that could further expand its LNG production capacity.

Oilprice expands on all the activity along the US Gulf Coast. It's more of the same, capturing some of the data points made above as well as data points made by RBN Energy over the past year.
Posted by Bruce Oksol at 5:20 PM No comments: Links to this post