Joe Biden: “We can only re-elect Donald Trump.”


By the way, note: he is using a teleprompter.

Wow, I hope Trump agrees to a dozen debates with this clown.

This video, by the way, is now appearing on any number of Twitter accounts. It's being re-tweeted faster than new coronavirus cases are being reported.

I can't wait to see this made into a slick Hollywood ad -- hopefully it will be played ad nauseum on late night television. In fact, maybe this is the only ad President Trump's re-election campaign will need to run.

I'm going to bed. Good luck to everyone.

This well has just gone over the 500K-bbl cumulative crude oil threshold:
It sits on a four-well pad; all the wells are doing similarly well but to a lesser extent.

In addition, there is an adjoining 5-well pad that is now being drilled, with one rig on site.
Posted by Bruce Oksol at 9:38 PM No comments:

This is so incredibly cool. I first posted the note in the screenshot below on October 27, 2011, and then posted it again, with a tag to follow-up in December, 2020. It's a bit early, but with WTI dropping below $50/bbl, I thought this was as good a time as ever to post it again. 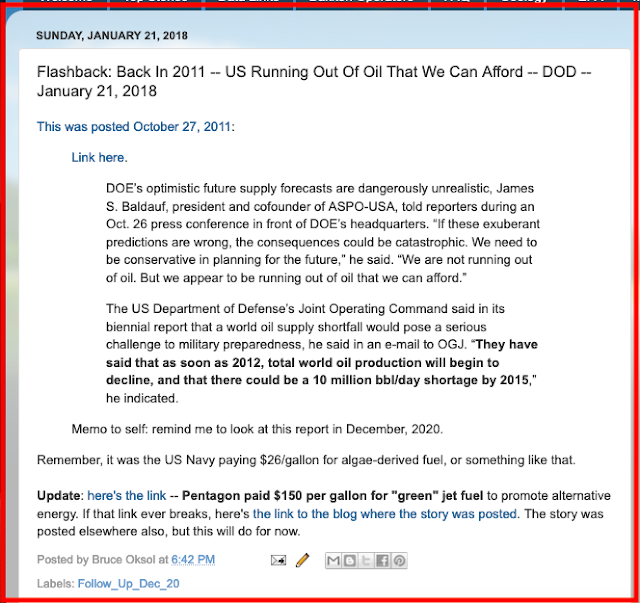 What a bunch of idiots. And to think they were the smartest and the brightest.

Interestingly, the second link in that screenshot takes you to the Russian Times and the story is still "up."

Just think, if Bernie is elected president, the Russian Times will likely be the new "government" newspaper. LOL.
Posted by Bruce Oksol at 9:13 PM 2 comments:

XTO with nine more wells in Alkali Creek. In graphics below: 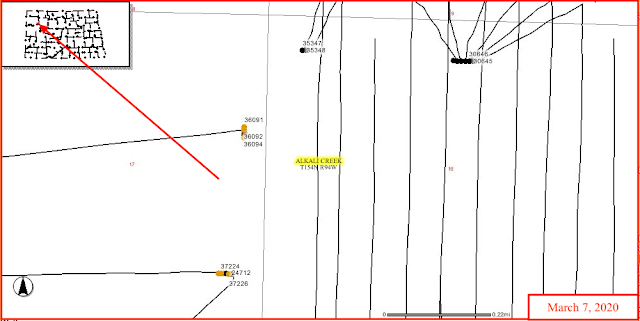 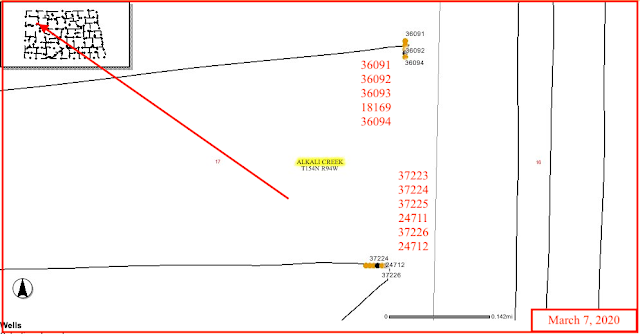 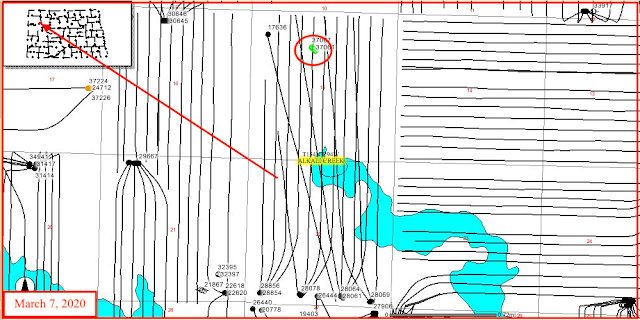 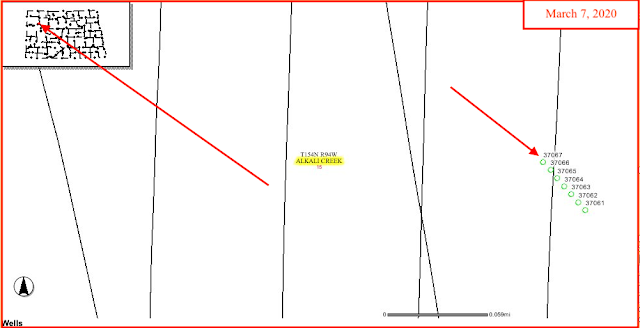 About two miles to the west of these wells are the XTO Krieger / Kulczyk wells.
Posted by Bruce Oksol at 7:35 PM No comments:

The well:
The other well sited in that section:
The graphic: 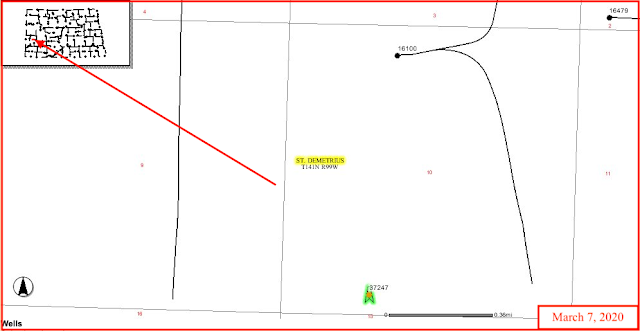 This well has just gone over 500K: 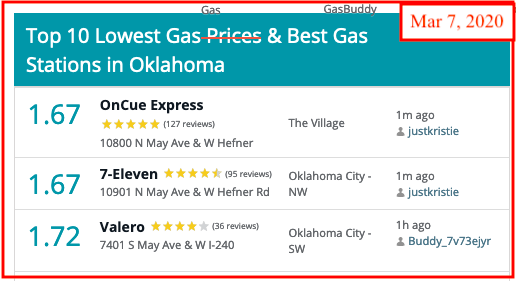 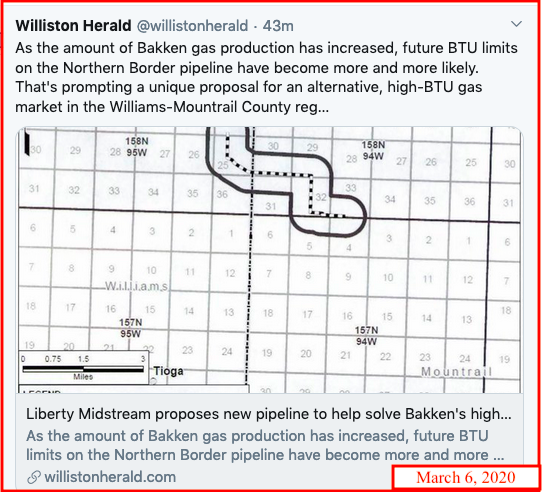 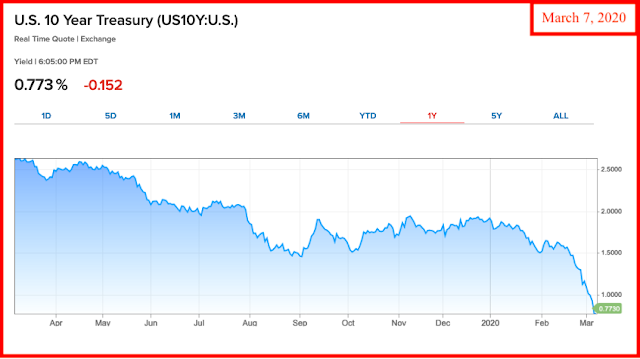 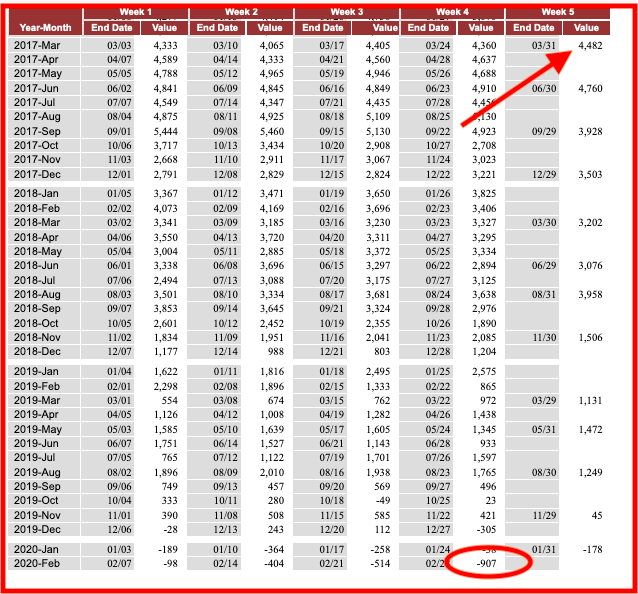 Bernie: let's kill the US oil sector. By the way, that's exactly what Russia wants to do. Coincidental? I think not. Wow, talk about collusion. And delusion.

Most ludicrous comment by EIA which the agency continues to iterate: despite the US, as a whole, being a net exporter, most regions of the US are still net importers of oil. California, Florida, Arkansas, and Idaho are huge importers of oil. Just saying. 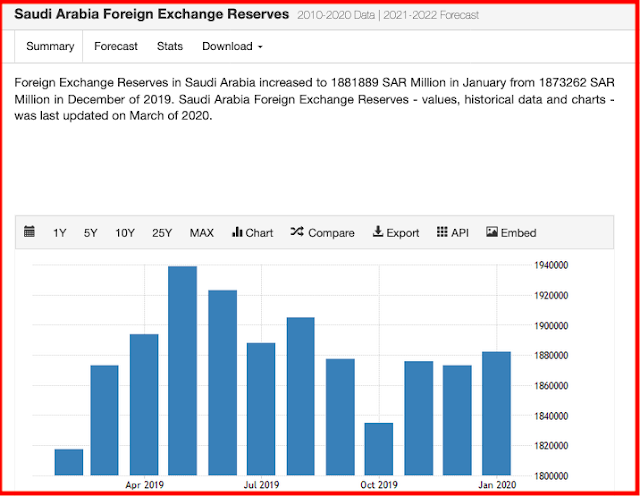 And we all thought ZeroHedge being permanently banned from Twitter was bad. It could be worse. I was completely unaware that one could be detained by Twitter. OMG! It's worse than I thought!

Updates Throughout The Day

6:49 p.m. Central Time: Italy plans large-scale lockdown in country's north to fight coronavirus. Quarantine, if approved, would ban movement into/out of northern provinces, including Milan, Venice, and Parma. Italy probably should have done this a week ago. A little late now. Infected most of the EU. Lombardy is Italy's major industrial region; would wreak havoc on Italy's fragile economy. I believe Italy may be the second largest economy, after Germany, in the EU.

11:41 a.m. Central Time: my hunch -- sometime after the students return from spring break, all schools will be closed for two weeks.

11:31 a.m. Central Time: OMG! Italy records more than 1,200 new cases. That's 12x more than China. A local north Texas high school did not cancel their student trip to Italy. Almost criminal if they bring coronavirus back to the DFW area. Italy remains out of control. Earlier, I posted that northern Italy where the cases are centered, has a disproportionate number of elderly. In Italy, deaths by age group (all deaths): 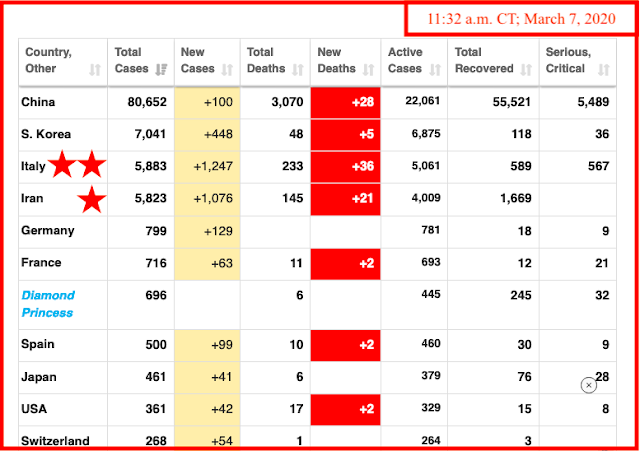 I forgot to post the usual "active rigs" data yesterday. A Freudian slip, no doubt. Or maybe I've caught "Joe Biden" disease. It's a not-uncommon malady among the elderly.


I've been waiting to post that the number of rigs is at a 5-year high but I might have to wait a bit longer.

I'm not watching the market, haven't read the WSJ in weeks, so what I know about non-corona-virus stuff and non-Bakken stuff is about nil. In fact, I was completely unaware of the 10% drop in WTI until I finally got bored and had to read the on-line edition of the WSJ.

Wow, a lot has happened in the past few weeks.

I assume Chris "Hardball" Matthews was watching from an undisclosed location in voluntary quarantine.

Super-duper Tuesday this next week includes North Dakota, I believe. Let's check. Yup. 14 delegates. Michigan and Washington state back in play now that Pocahontas has dropped out.

So, who does Biden select as his running mate?

I was most disappointed that the Schumer story has no legs. The mainstream media is avoiding this one like the plague. But it's out there. Lurking.

Even more disappointing: I haven't seen any follow-up regarding Brian William's math. No wonder MSNBC has experts to watch voting patterns. Brian would have no clue. Go over to YouTube .... search ... Brian .... LOL .... first thing that pops up: Brian Williams math. This is what I was looking for: The Life of Brian. 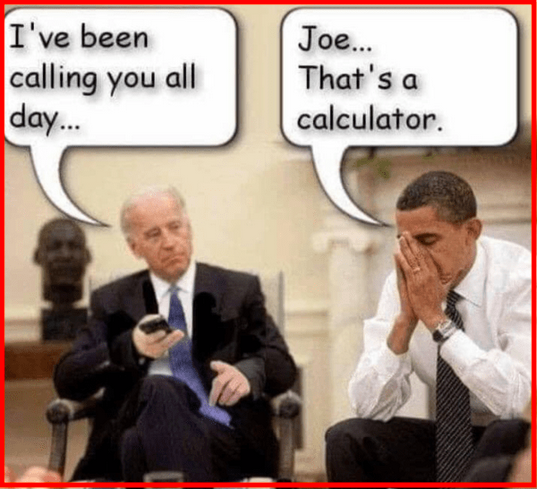 I went to bed early last night so I also failed to report the daily coronavirus update. The numbers, of course, are inaccurate but it's the best we have. Taking them at face value, China is down to less than 100 new cases. That is absolutely phenomenal. In fact, this belies (is that a word; am I using it correctly) the insanity of all this.

The numbers are so skewed now from country to country that it's hard to make sense of the percentage changes on a daily basis. It's a global issue composed of a dozen regional stories. Data for today, March 7, 2020:
Think about -- China with a billion people, with ground zero in their own country, and is now reporting less than a hundred new cases, while South Korea with a fraction of China's population is now reporting five times as many new cases each day.

I"m fascinated by that. I've mentioned before that I'm fascinated by the public health angle with regard to coronavirus. Case studies:
But now we have the best case study in front of  us: the EU --

One last note: I was surprised, very, very surprised to see the growth factor decline yesterday. I don't expect that to continue once the US starts mass testing, and the EU and UK start reporting ever higher numbers.

Week 9, ending February 29, 2020 -- unlike Coronavirus in which we get data in real-time, data for seasonal flu lags at least a week and the numbers are much more vague.


A war and a new refugee crisis. Link here.

Maybe more on this later. I can't say a thing because I haven't followed the market at all the past two weeks. The only thing I'm doing consistently is checking my cash on a daily basis (dividends) and buying more shares in non-energy companies.
Disclaimer: this is not an investment site.  Do not make any investment, financial, career, travel, job, or relationship decisions based on what you read here or think you may have read here.

This a.m. I was talking to another individual who loved Amazon. I mentioned that I love Echo/Alexa. He said he did, too, until his wife threw it out in the garbage when when she heard that Amazon/Echo/Alexa was listening into your conversations.

I mentioned that one could turn off that function by tapping the "red button." He said he knew that now, but not then. Hasn't changed a thing. No Echo/Alexa in that household. LOL.

The presidential candidate who can best tap into the paranoia will win the race.