North Dakota’s tax revenues fell short of projections by nearly $49 million in October, marking the third consecutive month of lower-than-expected collections and prompting the state budget office to discuss updating the forecast given to lawmakers in March.

Overall tax revenues are $112 million, or 7.5 percent, less than projected for the first four months of the 2015-17 biennium that began July 1.

Depressed crude oil prices and farm commodity prices continue to put a major dent in sales tax collections, which came in about $38 million, or 31 percent, below forecast in October, after being down $23 million in September and $44 million in August.

Email ThisBlogThis!Share to TwitterShare to FacebookShare to Pinterest
Labels: NDBudget

This is the problem with "peak oil."

Is it really "peak oil" when operators quit drilling for oil because there is so much oil floating on the high seas they can't sell it all?

This was actually posted by "Peak Oil Barrel."

In this article, John Kemp notes:

Hundreds of millions more barrels of crude are in transit in smaller Suezmax and Aframax vessels plus millions of barrels of refined fuels in transit by tanker.

Peak Oil? I hardly think so.
Posted by Bruce Oksol at 12:18 PM No comments:


March 11, 2016: a reader sent me some photographs of Woodrow Star "A" 1 this past week. I've also updated the production profile: 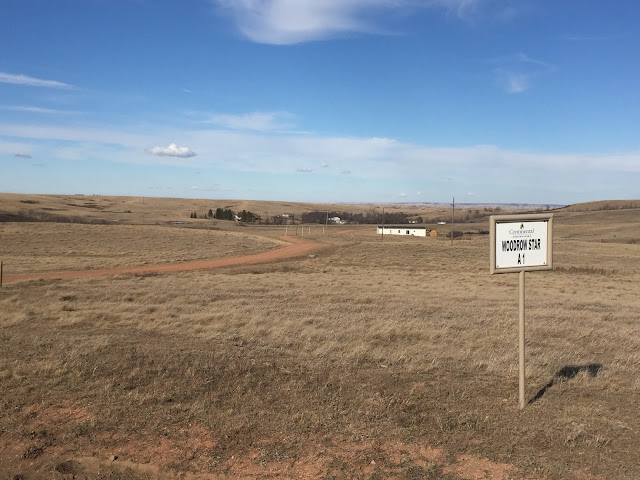 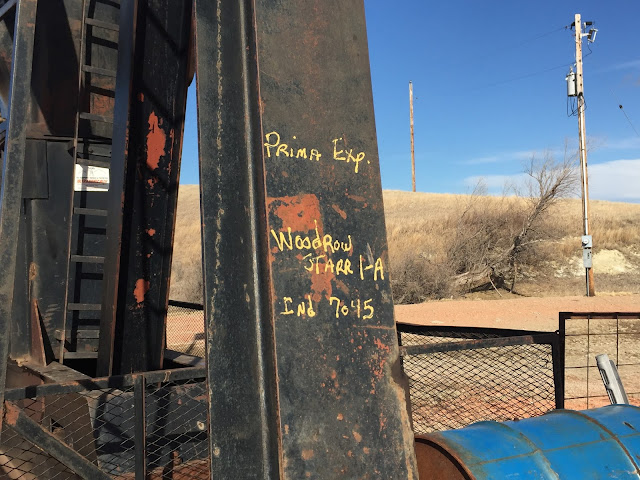 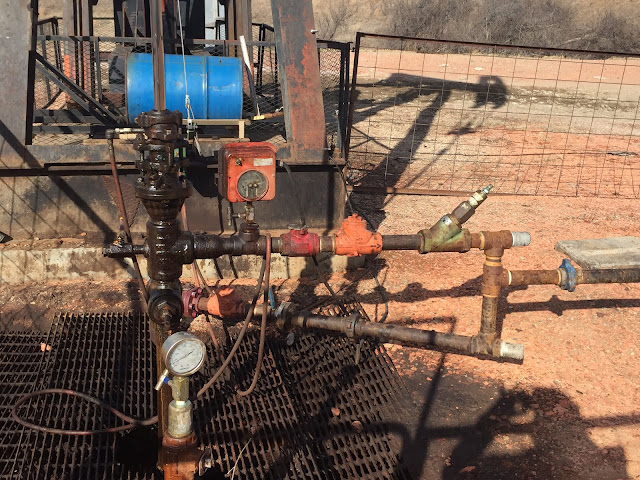 November 22, 2015: a reader provided a most interesting backstory to the Woodrow Star "A" well -- the original note is in the comment section below, but I brought it up here so that it can be searched by Google, for example:


Here is some more history on the Woodrow Starr wells. The original well at this location was drilled in 1953 by Pan American. It was targeted to test the Devonian and Silurian formations but these proved to be dry.

Pan American did find good oil shows in an unnamed zone at the top of the Devonian. They cased the well and it flowed oil from this section which they called the "Sanish Sand".

Later this zone became known as the Bakken.

Between 1953 and 1958 the Woodrow Starr #1 produced 279,254 barrels of oil (and just 98 bbls of water). Then casing collapsed in the well so Pan American drilled a replacement well just 300 feet to the north. These two wells have a combined production of 1.3 million barrels of oil and all from 20 to 30 feet vertical section.

They perforated both what we now know as the Middle Bakken and top bench of the Three Forks. There is obviously natural fractures in this area with the northwest/southeast trending Antelope Fault line just east of these two wells. Also, note that the recently permitted EOG 32 well spacing unit is just a short distance to the west of the Starr wells.

The spelling of the "last name" of the well is of interest. The first well was #341, Woodrow Starr 1 (with two "r's").  Except on a couple of documents in the file report, Star/Starr is generally spelled Star (with one "r"). A Google search of the internet suggests the correct spelling is with one "r."

The west-east separation of 2.4 miles is shown in the graphic.


Original Post
This million-barrel well recently celebrated its 57th birthday:
It is a vertical well in Antelope oil field.

In 1995, the operator "elected to designate this well as a stripper well."

I assume Harold Hamm sent a birthday card to Mr Woodrow Star "A" wishing the well another 57 great years of production.

Production for the past year:


"It's Only Make Believe" is a song written by Jack Nance and American country music artist Conway Twitty, and produced by MGM Records' Jim Vienneau, released by Twitty as a single in July 1958.

The single topped both U.S. and the UK Singles Chart, and was Twitty's only number-one single on the pop charts of either country.

On a segment of Pop Goes The Country, Twitty states the single was a hit in 22 different countries and sold over 8 million copies.

It is believed that Twitty wrote his part of the song while sitting on a fire escape outside his hotel room, to escape the summer heat, in Hamilton, Ontario. Twitty had come to Canada at the request of another American singer, Rompin' Ronnie Hawkins, due to Hawkins saying to Twitty that Canada was the 'promised land' for music.

It's Only Make Believe, Conway Twitty

So incredibly perfect on so many levels to accompany this post.

What I learned from comments at YouTube regarding this song and Mr Conway Twitty:

Some Housekeeping Regarding Miscellaneous Wells -- November 21, 2015

EOG advised the state that it was going to plug and abandon four Parshall oil field wells. The explanation:

These three wells were added to the list of "monster wells" in the Williston Basin. Note that these three wells have gone over the half-million bbl threshold in less than two years:
Note the amount of proppant used by EOG in these wells. For newbies, when the Bakken boom began, 1 million lbs of proppant was the "norm." BEXP (not Statoil) raised the bar early on by using 4 million lbs of proppant. When operator started using upwards of 10 million lbs about a year ago or so, it seemed more than incredible, now EOG is using nearly 20 million lbs in a single well. And it doesn't even get a headline in the local newspapers. Ho-hum.