Random Look At A Madison Well In A New Oil Field In North Dakota That Will Be Coming Off The Confidential List Monday -- March 6, 2016; This May Be The Smallest Oil Field In The Williston Basin (It Would Be Hard To Get Much Smaller)

March 7, 2016: After middle Bakken wells have been on-line for awhile, maybe into their 2nd year or 3rd year or 4th year or later, it's not uncommon to see them decline to 4,000 - 6,000 bbls/month for awhile before continuing the Bakken decline. There is a suggestion that the good Madison wells, on the other hand, maintain a 5,000 bbls/month for quite some time. One can see some great Madison wells at the "Monster Well" page.

Also, judge for yourself, but I think production may have gone up a bit in the existing wells after a neighboring well was stimulated (not fracked) among the three wells below.

Original Post
This regards a Madison well in a new oil field in North Dakota that will come off the confidential list Monday. This is a long note: there will be typographical and factual errors; if this information is important to you, go to the source. I am posting this only to help me better understand the Williston Basin.

At the bottom of this post is a screenshot of Chatfield oil field taken back on October 21, 2015. It hasn't changed much; one more permit/location (#32141) is now in the southwest "section" of this very small field, and of course #29622 which is also new, but that's about it. (By the way, I have called this a 2-section field; that's incorrect. The entire Chatfield oil field right now is the NW quarter of section 30 and another quarter section in section 19, both in T159N R81W. It's a small field: 320 acres, half a section.)

Back on September 29, 2014, I noted that I had not been able to find Chatfield oil field on the GIS map (maybe I missed it, but I doubt it); I opined that it might be the first new oil field in the Williston Basin since the Cottonwood.

It's a Madison oil field.


The other two producing wells in Chatfield oil field:
Both wells were taken off-line for the entire month of November, 2015. It will be interesting to see when #29622 was stimulated (it was not fracked so it was not on FracFocus); it appears the well was stimulated sometime in October, 2015. We will see tomorrow.

Just to add some fun to this, note the production profile of the other two wells about this time. First:

The graphic below is/was the screenshot taken some time ago (as noted above). The well coming off confidential Monday is 1,160 feet south -- due south -- of #27319.

By the way, my hunch is the Chatfield oil field will be extended to include two new "Chatfield" wells currently on confidential and lying right out the oil field: #31222 and #31307. The NDIC scout ticket identifies both of them as "Chatfield wells." 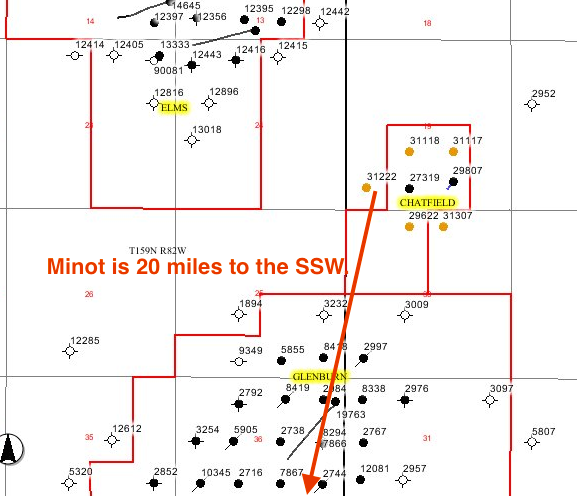 Pilot short hits regional airlines, AFP/Yahoo! is reporting. The article is "all about pay" with a few other work schedule / management / government regulations thrown in. But the gist of the article: all about pay, most of which sounded like the talk I heard 20 years while I was stationed overseas, assigned to a heavy aircraft squadron in which the pilots talked daily about whether to stay in the USAF or go to work for the airlines. The article does not mention the two 800-lb gorillas in the room:
I won't talk about ObamaCare because that has more to do with the pay issue and how it affects the regional airlines in general which is the gist of the article.

The article did not mention another huge problem: the demise of the farm team for the regional airlines: the USAF.

A 20-year retiree would very likely take a "lower paying" regional airline job because his military retirement pay and medical benefits might provide the margin the pilot/family required. The military pension system is changing and I have not kept up with it, but my understanding is that active duty members leaving before their twenty years are up do have a military "pension" of some sort, albeit significantly lower.

But it would be interesting to know how the move from manned aircraft to drones in the USAF has contributed to the shortage of regional airline pilots.

Link in The Atlantic.

This is really quite an incredible story. I was stationed in Germany for seven or eight or nine years -- time goes by, I forget -- and visited Paris on a regular basis. Of all the places I've been, I would have to say Paris is our favorite city (our: my wife and me). London is my favorite 2nd big city, but the difference between Paris and London is huge. Paris is in its own league among the cities I have visited.

But I digress. The point of all that is to say that my comments about the story at the link are probably really, really biased.

In Paris, public transportation worked. Even better than London. We went everywhere by light rail / subway in Paris -- quickly and efficiently. From the linked article, it is obvious I missed a lot, but still, a great system.

Now, Paris is in the process of improving an already excellent system even more. This comes at a time when Boston is cutting back light rail services, and California's bullet train seems mired in more red tape than ever before.

When you go to the link, if you do, and if you have not had the pleasure of visiting Paris, go first to the artist's rendering of one of the passenger stations, one of the terminals. The station at St-Denis will be the project's largest train station. Designed by the Japanese architect Kengo Kuma, the junction is expected to handle 250,000 passengers a day. Yes, you read that correctly: 250,000 passengers a day.

For $25 billion, the French will get that world-class train terminal plus:
Compare that to what one gets for $65 billion in California for the bullet train:
But look at what you get with the $25 billion in France: 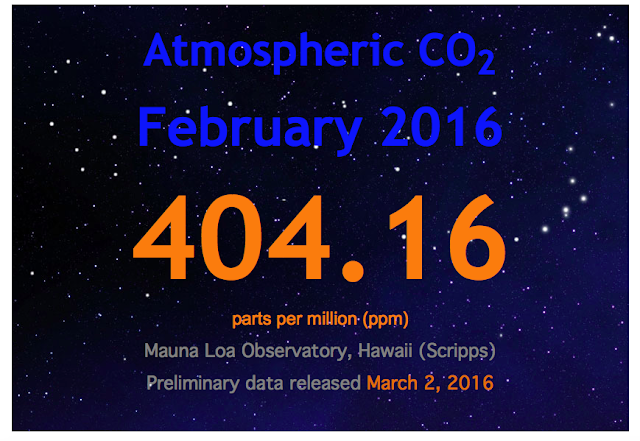 In January, 2016, the previous month, atmospheric CO2 was 402.52 according to the same source, same location.

According to wiki, just to help keep things in perspective:


Carbon dioxide (CO2) is an important trace gas in Earth's atmosphere currently constituting about 0.04% (400 parts per million) of the atmosphere.

There are credible reports that we may have dodged a "silver bullet": had CO2 continued to decrease we may have experienced a worsening Cold Age. The "Dinosaur Era" had CO2 concentrations 5 times higher than current CO2 levels.

I can go back to sleep now.

From a comment over at Macrumors, it could also hold the...

Posted by Bruce Oksol at 4:02 AM No comments:

My maps are usually "off" a little bit but I think this is fairly close (the landing strip at the new airport will run from the northwest to the southeast, and the airport footprint will be oriented similarly, rather than north-south as in the graphic): 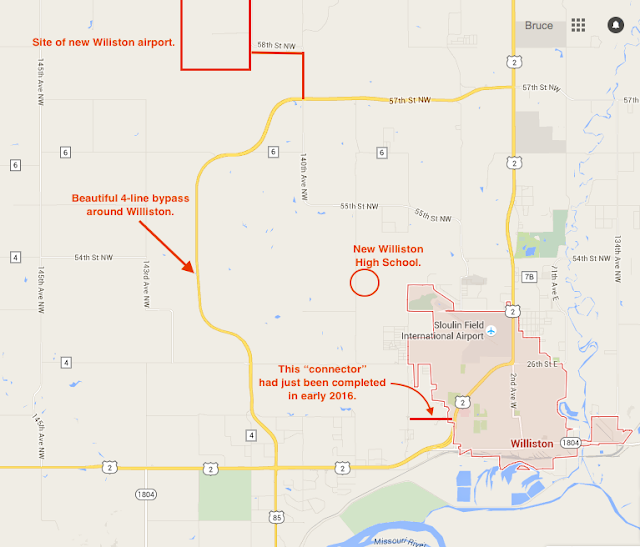 For an update on the construction of the new Williston High School, see this video taken in February, 2016:


I wonder if this video was taken by a drone?

Artists' renderings of the architects plans at this site.

When I last visited Williston in early February, 2016, apparently just a day or two before the above video was shot, I heard rumors that there was already talk the school would not be "big enough" for the number of students expected to enroll. The school is on schedule to open for the 2016 - 2017 school year.

For more videos of construction in Williston from Redline Development Services: https://www.youtube.com/channel/UCaPGm1GsEin7etsNy3JP6PA.

Redline provides Surveying, Engineering, and Construction services in Williston, North Dakota and the Bakken region. Their website is "under construction."
Posted by Bruce Oksol at 3:36 AM No comments:

Outside of OPEC:
This is really quite remarkable. Back between 2000 and 2005, the amount of crude oil stored in the US (not including the SPR) was less than 19 days of supply; most recently that number has soared to 33 days, source:

Posted by Bruce Oksol at 2:50 AM No comments: