So… NASA and the EPA can maintain essential operations with only 5% of their workforce, evolutionary biologists are nonessential drains on the taxpayers, NOAA meteorologists can’t attend the American Meteorological Society convention on the taxpayers’ dime… Maybe I’m just a bit jaded, but how does the word “vital” fit in here?  Can you think of a better example of a nonessential government employee than an evolutionary biologist?

See this link. The climate paper most widely covered by the media in 2018 was actually a call for global socialism.

Elites only. Meanwhile, in Disneyland. Disneyland raises prices -- by a lot. Least expensive, about $104/day but generally during the summer tickets will be $149/day. Outrageous, some say. Check out the price of ski lift tickets before getting too excited. Best price at Vail might be around $200/day. And for that you get about six rides up the hill. If you've ever been to Disneyland, you might agree that cutting attendance by 25% daily might improve the experience for those who still go to Disneyland. I've been to Disneyland more times than I have fingers but I have never been to Disney World.
Posted by Bruce Oksol at 4:57 PM 4 comments: 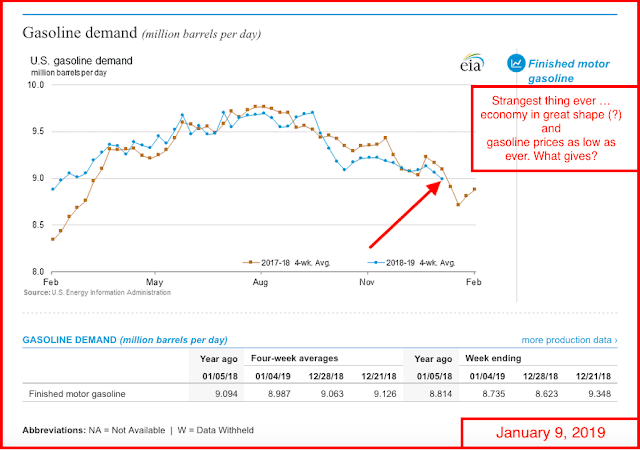 Jet fuel: readers of the blog have noted US jet fuel pricing over the past few weeks. Screenshot from oilprice today:

Comment: if the trend for WTI continues (and the tea leaves suggest the trend will continue) it's very possible that folks who have been accumulating shares in publicly traded oil companies over the past few weeks may have done the right thing. I don't know. I'm not following the market, but the move over the past few days has been quite remarkable. Someone must be making some money.

One permit renewed: a Whiting permit in Williams County

January 10, 2019: the shortage continues. After denying that there was any fuel shortage, the Mexican government is now commandeering private trucks to bring gasoline/diesel to service stations.

From the linked article and comments:

From oilprice.com after today's numbers came out: 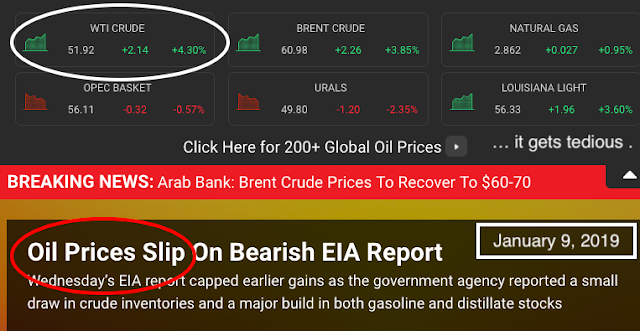 The link was sent to me by Don.

From Geo News, this will probably load as a PDF on your desk top.

Apple slashes iPhone production for second time in two months; demand woes worse than anticipated. Production to be slashed 10% over next three months. Over at ZeroHedge.

France to ban all protests; will stop "yellow vest" movement. Over at ZeroHedge.

Arctic and Antarctic sea ice now at historic high levels, but for Algore and his singeries, facts don't matter. Link here. In addition, in the Southern Ocean surrounding Antarctica, the sea surface temperatures have been cooling since 1979. But again, facts don't matter.
Posted by Bruce Oksol at 6:16 AM No comments:

Into the danger zone:

LOOP: I think one could devote an entire blog to the LOOP. See below.

Site added to the sidebar at the right: powerline.

Only one well coming off the confidential list today -- Wednesday, January 9, 2018:
Active rigs:


In 2018, a handful of midstream companies started racing to develop deepwater export terminals along the Gulf Coast that can fully load Very Large Crude Carriers (VLCCs) with 2 MMbbl of crude oil from the Permian and other plays. While some of those companies are moving toward final investment decisions (FIDs) that would bring their plans to fruition in the early 2020s, terminal operators with existing VLCC-capable assets — both onshore and offshore — turned up the volume in a major way in December.

Today, we outline the strides made in recent days by the export programs of the Louisiana Offshore Oil Port (LOOP), Seaway Texas City and Moda Midstream.The U.S. is now the largest oil-producing country in the world — recently surpassing both Russia and Saudi Arabia — with output at 11.7 MMb/d per the Energy Information Administration’s (EIA) Weekly Petroleum Status Report for the week ended December 28 (2018) and averaging 10.8 MMb/d for the full year. Additionally, RBN’s mid-case scenario forecasts that volume will grow by about 900 Mb/d each year to 16.2 MMb/d by 2024, with 60% of that growth coming from the Permian. Figure 1 below shows our latest view of where U.S. crude production is headed.

Amad: yesterday it was the Amad that had departed the LOOP. The Amad, now just north of Cuba, can be tracked here. Bound for KR YOS -- Port of Yeosu, Korea. ETA: February 26, 2019.

LOOP: from the linked RBN Energy note above --


In today’s market, there’s only one existing terminal that can fully load a VLCC in one fell swoop — that’s the Louisiana Offshore Oil Port, or LOOP, off Port Fourchon, LA. In February 2018 LOOP kicked off its export program, loading an entire supertanker for shipment to China. They did it again in March, and then sent out one a month from June through September. The exports out of LOOP quieted for a few months as the facility worked on expanding its capacity to load tankers at a faster rate.

When December rolled around, LOOP showed off its new upgrades to the market by loading three supertankers — about 6 MMbbl of crude in total — in a matter of only seven days. That’s impressive — it had never been done before — but companies like Enterprise Products Partners have indicated that their planned offshore terminals will be capable of more than doubling that pace — to as many as  seven supertankers in a week’s time.

While LOOP remains way ahead of the curve in terms of its VLCC-loading capabilities, the folks at LOOP weren’t the only ones making a splash last month. The export hub in Ingleside, TX, located in the northeast corner of the Port of Corpus Christi, has made a lot of headlines over the last couple of years. In May 2017, when the property was still owned by Occidental Petroleum and dubbed the Oxy Ingleside Energy Center (OIEC), Oxy and the port held a very public ceremony as the VLCC Anne was brought to the dock to test if it would even be possible to partially load crude onto a VLCC from OIEC someday (see photo below.) The experiment confirmed that, yes, it could get done, with a few relatively minor modifications. In August 2018, Oxy announced a deal to sell the terminal to Moda Midstream, and in December 2018, Moda completed the improvements needed to partially load VLCCs at the hub and got to work.

Posted by Bruce Oksol at 5:48 AM No comments: