This post won't be updated. This well is being tracked at this link and that's where data will be updated.


Quick! Guess the operator and the field -- LOL --
The well: 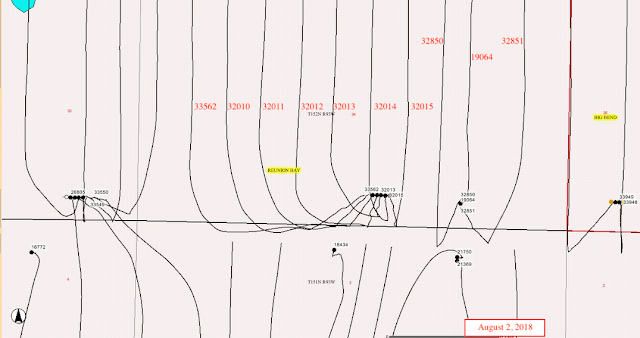 From the press release:
Specific reference to the Williston Basin:


During the second quarter 2018, EOG resumed completion activity in the Williston Basin as part of its seasonal development program.

In the North Dakota Williston Basin, EOG drilled nine wells and began production from two wells in the second quarter.

Compare that Bakken IP data with that of the DJ Basin:


EOG began production from eight wells in the DJ Basin during the second quarter 2018. In particular, a four-well package of DJ Basin Codell wells in Laramie County, WY, the Windy 576 and 577-1702H and the Windy 591 and 593-1705H, was completed with an average treated lateral length of 9,300 feet per well and average 30-day initial production rates per well of 870 boed, or 755 bopd, 70 bpd of NGLs and 0.3 MMcfd of natural gas. All four of these wells are premium. They were drilled in an average of 4.4 days per well with an average cost of $3.4 million per well.

Share price: fairly flat today; not too far away from 52-week high.


Right Down The Line, Gerry Rafferty
Posted by Bruce Oksol at 11:50 AM No comments: 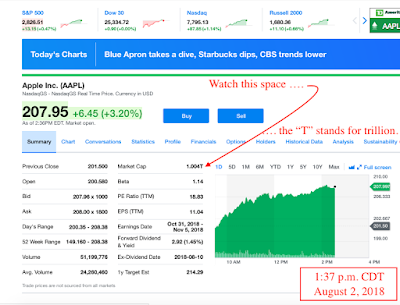 The stock rose nearly 3 percent following a strong third-quarter earnings report earlier this week, briefly hitting a session high of $207.05 in midday trading before falling back below $207.

Based on a recently adjusted outstanding share count of 4,829,926,000 shares, a stock price of $207.05 nudged Apple over the finish line in the race to one trillion.

Investors had previously been looking for a share price of $203.45, but the company's hefty stock buybacks moved the threshold higher.

The Dems weigh in:

Money for Nothing, Dire Straits

August 2, 2018: in response to the graphic below, a reader sent me a note, asking: "There's so much more gas ready to be "tapped" there's no need to store as much ... just crack a few valves open a little more ... Am I missing something?

I don't know. I know very, very little about natural gas. It's only through the blog that I even began following natural gas. But if you are correct, it means the weekly graph that the EIA publishes and that traders follow has been completely irrelevant all these years -- in other words, why even track the fill rate?

Or, with the Utica, Marcellus, et al, things have changed, your (implied?) thesis is completely correct, and going forward, they either need to quit following the weekly fill rate or explain to us why it's worth tracking.

This is rather phenomenal to say the least. Don sent me the link -- I might have gotten to it eventually, but possibly not.

I'm pretty much avoiding business news today -- Dow futures were down 200 points and on days like this, I simply try to ignore the news. Lots of YouTube.

But I digress. Look at this graph. Amazing. Dynamic link here. 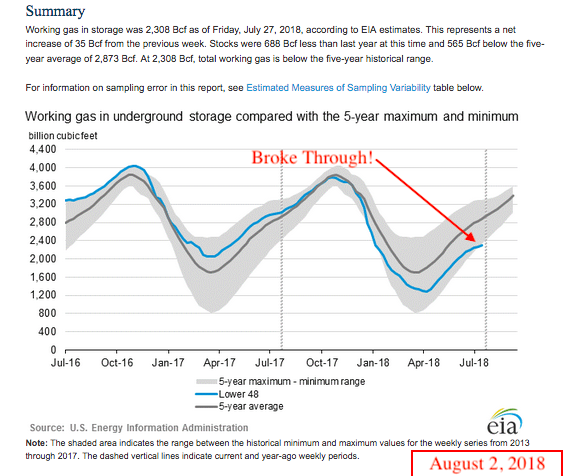 Working gas in storage has broken through the five-year minimum .... who wudda thought? Hottest days of summer yet to come. Then a cold winter. It could be hard to catch up by December.

How low will it go? For now, break through:

This page is simply for the fun of it. If you are serious about the Bakken, I would skip this page. Normally I don't post this stuff, but:
First, quick, what's a "schwa"?

Let's go to wiki for an example:


In linguistics, specifically phonetics and phonology, schwa (/ʃwɑː/, rarely /ʃwɔː/ or /ʃvɑː/; sometimes spelled shwa) is the mid central vowel sound (rounded or unrounded) in the middle of the vowel chart, denoted by the IPA symbol ə, or another vowel sound close to that position. An example in English is the vowel sound of the 'a' in the word about. Schwa in English is mainly found in unstressed positions, but in some other languages it occurs more frequently as a stressed vowel.

Wow, that's a complicated paragraph. Easier, a schwa:
At this point I have to give away a bit of the punch line because it's pretty obscure. But did you note that part about the "schwa" generally being unstressed in the English language?

So, first inside joke, from teepublic (make sure you have only one "p" in that URL: 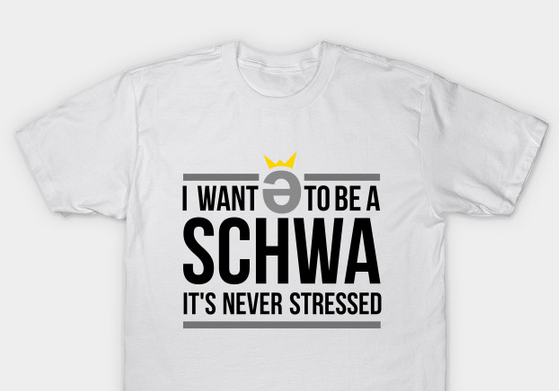 Okay, that's pretty good so far but it gets better.

If an extraterrestrial alien were to study the English language on her own, how many ways might she think about how to pronounce "Sioux." Yup. "Schwa" would be one possibility. LOL. I assume "lewisandclark" -- lineage traced back to blue-stocking Brits -- would have called the Lakota, the "schwa."

Now this, from a reader, and, wow, this reader had to be incredibly alert, an eagle-eye to spot this. From a comic strip: 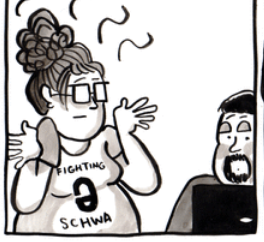 The inside joke. Of course, everyone worth her salt in North Dakota will get the inside joke, but for everyone else "the fighting schwa" is a reference to the (RIP) "fighting Sioux."

Now, just between you and me, I think that's pretty clever. The reader who sent that to me also thought it was very clever; that's why the reader sent it to me. Hellooooo....

Now, how in the world does this end up in a cartoon strip and on this blog?

The rest of the story:

The screenshot is from "Amanda The Great," drawn by a cartoonist literally living in the heart of the Bakken, in Watford City, ND. And, yes, el-Dweek is her true surname, married.

Here's a March 2, 2018, article in The Williston Herald about the cartoonist, Amanda El-Dweek. It seems I've blogged about her before. I forget. I know when I first saw the surname, I assumed it was of Syrian descent.There's a huge Syrian population in western North Dakota -- I have blogged about that before -- many of whom made the Williston farming communities what they are today: huge, and highly successful, growing the best pasta-making hard wheat in the world. From the linked article:

El-Dweek, of Watford City, draws the comic stip “Amanda the Great,” online at GoComics.com. The cartoon is light-hearted, focusing on the daily struggles of a woman who looks a lot like her.

As a matter of fact, it for the most part is her. So it’s no surprise people get to know her through her strip.

Amanda the Great has long been El-Dweek’s fictional counterpart. Coming up with the name was fairly easy.

“I used to sign my papers that way in college, and I got scolded for it. And rightfully so,” she said. “I did it just to be funny and not out of arrogance or anything.”

Okay, so where were we? Ah, yes, "the fighting Schwa."

I guess that's the end. I never knew what that upside-down 'e' was called and now I know. I can't wait to discuss this with Arianna, our oldest granddaughter who knows something about everything. Something tells me she will know what a "schwa" is. LOL.

I wanted to post a music video of Siouxsie Sioux at this point, but I just can't get "into' her music. So no Siouxsie Sioux video. We'll have to do with something else.

Loud and lots of bass:

How she researched this story is incredible. Had it not been for her, the story would have likely been lost.

The book:
Prologue: the setting. How this "quest" began. Her first visit to Ravensbrueck, about an hour's drive from Berlin's Tegel airport.

Enough for now. Will be continued elsewhere.
Posted by Bruce Oksol at 10:38 AM No comments:

Record High Run Rates In US Refining Industry -- August 2, 2018; Another Pipeline Linking The Bakken To The Gulf Coast


While crude oil producers in the prolific Permian Basin are living out a Shale Revolution, the Midcontinent region of the U.S. is having a Refining Renaissance. Crude takeaway constraints, mainly due to insufficient pipeline capacity, are driving the prices of crude in Western Canada and West Texas to attractive lows against the WTI NYMEX benchmark for crude at the Cushing, OK, hub. Cheaper oil can contribute to bigger margins for refiners, who are supplying increasing volumes into a retail market that’s selling gasoline at the highest prices in four years. What will happen if the refiners don’t rein in their runs? Today, we’ll explore the implications of record-high run rates in the U.S. refining industry.