Getting close to winter. Things start to slow down. Close to a thousand DUCs that need completing.

November 3, 2018: the pipeline mentioned below is now in service. The name of this well is the Valley Crossing Texas-To-Mexico gas pipeline.

For me, personally, one of the best things I ever did was start the blog on the Bakken. Without question, without the blog I would not have kept up with things, and I certainly would not have had incredible good input from any number of readers.

One of the stories that has fascinated me is the Mexican energy story. RBN Energy has had a good series on Mexico, including a great article earlier today.

Now, SeekingAlpha is providing another update on Sempra Energy and Mexico. Like real estate, it's all about location, location, location, and in Sempra's case, being "next" to Mexico has been nothing but great news. One would have thought the same thing for MDU being in the heart of the Bakken, but that did not out so well. Whatever. I digress.

Back to Sempra. Over at SeekingAlpha:

I've blogged about Sempra, IEnova, and these issues at several posts earlier; this is one example, but a google search of the blog will provide additional posts. I assume the wind farms are being bought to a) comply with government mandates, current and future; and, b) to provide tax credits to offset their fossil fuel projects. I did not post that story, but it is being reported that Warren Buffett is making more off tax credits than he is producing electricity from wind/solar. I did not post it because it's a "dog-bites-man" story.
Posted by Bruce Oksol at 5:14 PM No comments:

The article does not mention:
The Geico Rock Award nominees are listed here.

Meanwhile, deficits appear not to matter.


The government ran a $587 billion budget deficit for the just-completed fiscal year, a 34 percent spike over last year after significant improvement from the record deficits of President Barack Obama's first years in office.


Read more here: http://www.mcclatchydc.com/news/politics-government/national-politics/article108285582.html#storylink=cpy
And then this:

Friday's deficit news, while sobering, does not appear bad enough to jolt a gridlocked Washington into action to stem the flow of red ink. It came in an annual report by the Treasury Department and the White House budget office.

Googling that "deficits no longer matter" brings up any number of distinguished writers. My hunch is that before I die, the Nobel price in economics will go to an economist that can strongly argue the case, and perhaps even prove his point with the US deficit.

Just as borders no longer matter.


U.S. retail sales rebounded in September amid a surge in motor vehicle purchases and rise in discretionary spending, pointing to solid demand that reinforces expectations of an interest rate increase from the Federal Reserve in December.Other data on Friday suggested a pickup in inflation, with producer prices rising broadly last month to record their biggest year-on-year increase since December 2014. The reports were the latest indication that the economy regained momentum in the third quarter after a lackluster first-half performance.

"Today's data give the Fed a green light to raise interest rates by year-end.

Retail numbers were solid and confirm that the economy is moving in what the Fed believes is an acceptable fashion," said [one of many talking heads].

And I thought automobile sales were down. Silly me. From an earlier post:

I guess whatever narrative you want to believe.

Joining the long list of cities and states booting out Wells Fargo, one can now add Ohio. At Cleveland Patch:

The governor must have pals at Wells Fargo. This is just a one-year ban.
Posted by Bruce Oksol at 1:24 PM No comments:

Look at the average EURs in the chart below for these operators. The difference is striking!

The table below provides the current average recoveries for all the wells analyzed. Using a hyperbolic decline extending production three years an EUR was developed. This provided a 5-year EUR. Each operator had differing start times, so this varied from 50 to 62 months. The EURs did provide some interesting results:

Today we have the rotating beacon over at The Drudge Report. Doesn't amount to a hill of beans, but it is what is is.

It is interesting that now that President Obama has less than one hundred days remaining in office, his mouthpieces are abandoning him. I would not have posted this -- it's another "dog bites man story" -- but the source is impeccable (and I use the word loosely), Bloomberg: one million Americans are losing their health care as insurers "walk away."


A growing number of people in Obamacare are finding out their health insurance plans will disappear from the program next year, forcing them to find new coverage even as options shrink and prices rise.

At least 1.4 million people in 32 states will lose the Obamacare plan they have now, according to state officials contacted by Bloomberg. That’s largely caused by Aetna Inc., UnitedHealth Group Inc. and some state or regional insurers quitting the law’s markets for individual coverage.

Sign-ups for Obamacare coverage begin next month. Fallout from the quitting insurers has emerged as the latest threat to the law, which is also a major focal point in the U.S. presidential election. While it’s not clear what all the consequences of the departing insurers will be, interviews with regulators and insurance customers suggest that plans will be fewer and more expensive, and may not include the same doctors and hospitals.
It may also mean that instead of growing in 2017, Obamacare could shrink.

As of March 31, the law covered 11.1 million people; an Oct. 13 S&P Global Ratings report predicted that enrollment next year will range from an 8 percent decline to a 4 percent gain.

Anyone still supporting ObamaCare is simply not paying attention or have a personal, vested interest, of which there are many.

Not to worry: HillaryCare comes next. Hillary would be smart to stay as far away from US healthcare as possible. Let the Democratic leadership in the House and the Senate do the heavy lifting.
Posted by Bruce Oksol at 12:00 PM No comments:

This is the key paragraph in the Huffington Post article:


Some of the island’s drugs may face hurdles entering the U.S. market, however, because the Cuban government has disregarded international patents in order to make generics widely available and keep costs down.

Who would have guessed?


The changes promise to boost Cuba’s health care system ― which is lauded throughout Latin America for its preventative care and held up as one of the socialist revolution’s greatest achievements by the Castro government.

The island’s pharmaceutical industry has also made major advancements ― including developing the vaccine CimaVax, which impedes the growth of cancer cells, and Heberprot-P, which treats diabetic foot ulcers. Cuba has patented some 400 drugs, according to the NACLA Report on the Americas.

Drugs, rum, and cigars. What's not to like.
Posted by Bruce Oksol at 11:24 AM No comments:

Email ThisBlogThis!Share to TwitterShare to FacebookShare to Pinterest
Labels: ObamaCare_2016


RBN Energy: Supplying Mexico's growing natural gas demand. This is quite a story. One graphic tells the complete story why Mexico needs more US natural gas.

RSP Permian acquires Silver Hill for $2.5 billion. I've posted RSP Permian on the blog for the past several days. Interesting how things turn out. Data points:
$61,100 / net acre. In line with other recent deals.

On a pretty good day for the market, TSLA drops well below $200/share.

Early morning trading: Dow 30 up 140 points. NYSE:
US retail sales rose in September by most in three months.

US business inventories increase as retailers boost stocks. It looks like the Hanjin bankruptcy was managed well.

SoftBank and Saudi Arabia team up for $100 billion tech fund. How big is the new SoftBank investment fund backed by Saudi Arabia's PIF? From Ahemd Al Omran, in a twitter:


To put this into context, companies backed by venture capital raised a total of $130 billion last year globally. A $100 billion fund would be able to buy all of Salesforce.com, LinkedIn, and Twitter, GoPro, and Fitbit and still have a few billion left over. SoftBank's current market capitzlization is $75 billion.

The other day our 13-year-old granddaughter -- who says history is her favorite subject -- said she would like a "book on world history."

That was a hard one. Did she want a book that was fun to read, good literature, or did she want a textbook with a lot of "dry" history? My wife and I checked out Barnes and Noble where they had not less than four double-sided back cases in the history section, but no single book on "world history." Except for textbooks, I was not sure one would exist.

I then went to google and to Amazon.com and found what is perhaps the classic, or the "Bible" in this genre: The History of the World by J.M. Roberts, older editions. It has since been revised by Odd Arne Westad, c. 2013, published by the Oxford University Press, Sixth Edition.

It was delivered two days ago and I am immensely impressed. I will give it to our granddaughter this weekend with a few notes from me regarding the book. At 1,187 pages, it is not meant to be read from cover-to-cover over the weekend. At the end of the day, it is a reference book.

Its index is 71 pages long, but there is no bibliography, no end notes, not footnotes, no nothing. Just 1,187 pages of narrative.

There are very, very few dates in this book (relative to the size of the book). It is a narrative, in the sense that one's uncle is telling a niece the history of the world, attempting to explain why things happened when they did and in the context of what was going on around the world at the same time.

There are a lot of black and white, relatively small, maps but adequate and serve their purpose. There is no timeline. We will buy a separate timeline that she can post on her wall.

The book is divided into eight "books" and again, no dates are given (but obviously the book is laid out chronologically).

Some reviewers suggested that the volume is Euro-centric -- of course, it is. Reading the book, one quickly understands why. I was curious to find an example. For that, I turned to Book Four: The Age of Diverging Traditions, and to Chapter 8 in that book: Worlds Apart.

This book [Book Four in this huge tome] runs from the 2nd century to the 14th century AD. The early chapters begin well south and east of Europe, Eurasia (modern day Turkey), India, China, before moving on to Europe, which we finally get to in Chapter 4 (of Book Four): The New Middle East and The Making of Europe. Then, in three later chapters, India, Imperial China, and Japan.

Chapter 8 in Book Four: Worlds Apart, in just a few pages, covers the history of Africa and the Americas during this same time period. For the first time in my life, I finally have a rudimentary picture of what was going on in Africa during the first 1500 years following the birth of Christ.

Obviously in just a few pages, the history is not comprehensive, but it's like an unadorned Christmas tree. From that short chapter, I have the general idea of Africa at that time. Now, if I want, I can buy the ornaments -- additional books on the history of Africa during this time period.

I've provided an overview of the book for our granddaughter. Whether she uses it or not, my hunch is she won't use it at first, but maybe later on. As noted, we will give her the book this weekend, but I will probably order a second copy for my own bookshelves. 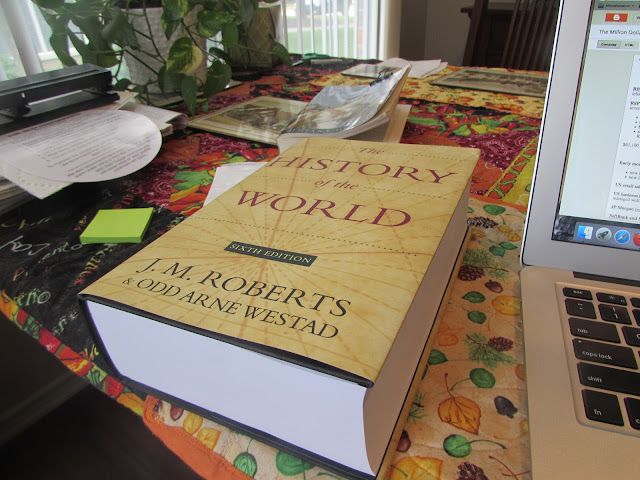