Posted by Bruce Oksol at 5:06 PM No comments:

The horizontals/completed wells in the graphic below are the Rolfson wells. 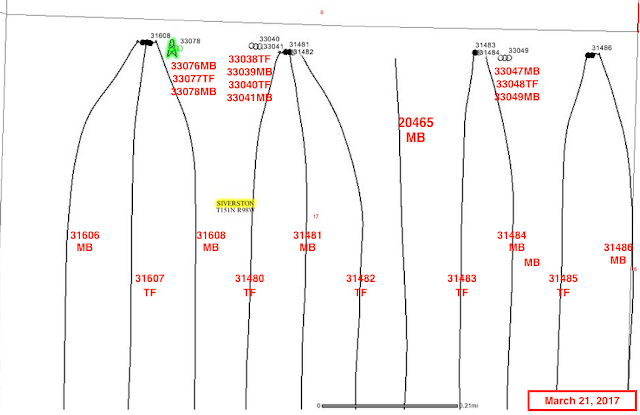 A well runs south to north, right in between the Patsy wells:
That well is discussed in depth at this post.
Posted by Bruce Oksol at 4:21 PM No comments:

This is somewhat embarrassing. After ten years of blogging, I'm still learning about basic geology in the Bakken. My hunch is that I know 1% of what most roughnecks have forgotten. If that make sense.

This all comes about because of a recent question about "claystone." A reader mentioned that claystone was one of many names associated with mudstone and shale.

So, with that, let's see what google leads us to:


Mudstones and shales are made of silt- and clay-sized particles that are too small to see.

The only difference between mudstone and shale is that mudstones break into blocky pieces whereas shales break into thin chips with roughly parallel tops and bottoms. Both are made of ancient mud.

From the point of view of understanding the ancient conditions of sediment deposition, it is more useful to subdivide mud rocks into siltstone and claystone. We cannot see the difference between these rocks, but it turns out that siltstone feels gritty when nibbled or rubbed against a tooth whereas claystones feel smooth.

If you find a claystone, you know that it accumulated in a very quiet environment with almost still water.

Wiki, of course, goes into great depth (no pun intended).

And, it makes sense, a site called Geology.com would cover the topic, also.

So, back to A, B, C, and D among Native Americans.

B: not of Siberian origin.

Polynesians did not reach North America but they did manage to cross the entire Pacific Ocean, reaching South America, and returning with the sweet potato, a decidedly Andean crop. Polynesians did not take part in colonization of America except in Hawaii.

Although the magical Polynesian "motif" in not found in America, the ancestral sequences certainly are: 189 217 and even 189 217 216 are right there at the center of the cluster B  sequences of Native Americans.

But how did "B" arrive in America? A, C, and D are of Siberian origin, as noted above. The author conjectures that "B" may have made it to Siberia/Alaska, but did not stop there. Rather, they traveled along the coast, south to Central and South America. A, C, and D were stopped by mountains and glaciers on the North American land mass.

Chapter 4
The Mystery of Cluster X

So, to review: among the Native Americans, A, B, C, and D have closest matches in Asia; but A, C, and D trace back to Siberia; B back to Taiwan and China.

Some years after the discovery of A, B, C, and D, a fifth cluster was found among some American Indian tribes. Much of the alphabet had already been taken for other clusters of non-American Indian peoples around the world, so near the end of the alphabet, the "X" was chosen for this new cluster among Native Americans.

The catalyst was a study of the Ojibwa.  The Ojibwa are the third-largest Indian nation in America, surpassed in numbers only by the Navajo and the Cherokee. They live in the general area of the Great Lakes. Cluster X is highest among Ojibwa, but is also found among the Sioux, the Yakima (Washington State), and the Navajo. The genetic connection between Ojibwa and Navajo also mirrors their related languages and may be an echo of a southward migration of the Dine -- the name the Navajo give to themselves -- mentioned in their mythology. Cluster X did not find its way south of the Mexican border.

Where did cluster X come from? No traces in Siberia or Alaska; only a single example in China. But plenty of matches in Europe. Seems to trace back to one of the "seven daughters of Eve," Xenia.

Research took the author to Norris Farms in central Illinois.

Genetic studies of Windover -- highly variable and only one cluster that is anywhere near Native American cluster A. Reliability is in question. But one of them as the core cluster X 223 278, which if genuine, would put a lower limit of 8,000 years on the antiquity of the cluster in America.

This puts a European basis for some Native Americans; caused a huge outcry when published.

The research takes us to "Kennewick Man," Washington State, discovered in 1996. Anthropologist thought the skull looked "European" which caused a huge stink, again.

Who owned the skull? Went to court; settled in 2005, but genetics still had not settled the question.

With this the author moves into the Native American beliefs, legal questions, etc. and uses the Havasupai as a case study (page 58). To make a long story short, it's unlikely "we" will ever get any more genetic research from Native Americans. But the author does discuss the most fascinating connection between diabetes type 2 and the Pima Indians.
Posted by Bruce Oksol at 11:16 AM No comments:

The Banks wells:
An outlier:
The Poe wells: 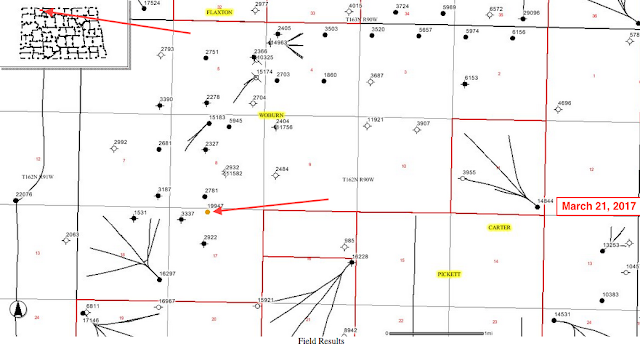 Other: Trendwell has two permits in ND: #1147 and #16220, a Madison well, active and in Lignite oil field; Trendwell increased production of the Madison well (#16220) from 150 bbls/month to 1,800 bbls/month in January, 2017, when it came back on line after being off-line for about five months. Trendwell Energy has been added to "Bakken Operators."
Posted by Bruce Oksol at 8:42 AM No comments:

Break-evens: this was a most surprising article to find break-evens in the Gulf of Mexico. This is an article on Shell drilling in the Gulf of Mexico Mars oil field. This is deep-water drilling, not shallow shore drilling. Implications for the Bakken. At The Wall Street Journal. There was only one thing that caught my eye in this article, and it may be the best story of the week or the month. From the article:


Shell is going back into old, deep wells and using them to drill out horizontally into shallower layers of oil-bearing rock. It is also using water to flood reservoirs once thought to be played out, hoping to flush more crude to the surface.

Shell can also produce oil for $10 to $15 a barrel by reopening old wells and using water and chemicals to flush more fuel out of the ground, Mr. McMahon said. The company is retapping a dozen wells near Mars in the first half of 2017, with another dozen tentatively scheduled for the second half of the year.


When Shell initially discovered Mars in 1989, it was the largest find in the U.S. since oil was struck in Alaska’s Prudhoe Bay in the 1960s.

But think about that: if an operator can produce oil fro $10 - $15 / bbl in deep-sea drilling, imagine what they can do in the Bakken.

Pricing: under-$50 WTI will be short-lived -- Rigzone staff.

Apple: eagerly awaiting a "refresh" on the Apple page. By the way, it's up. Now to get the real story over on Macrumors. Here it is:
Saudi exports: Riyadh-based/supplied figures -- exports fall for second month to 7.713 million bopd in January, 2017. The graphic shows that exports in January, 2017, now only slightly higher than exports in October, 2016, a month before the cuts were announced. The reason fro the decrease in January was because of a huge increase in November, surging from 7.6 million bopd to 8.3 million bopd.  No link; over at Twitter from Platts.

Climbing a wall of worry: if one watches the news closely, this is really quite remarkable. So much "scary" news and the market is up about 40 points. Technology stocks are all at record highs. AAPL: up another dollar, now around $142.60. Headwinds:

March 21, 2017, T+60: Ivanka moves into West Wing and the mainstream press doesn't know how to handle this. Can you imagine if a disbarred lawyer running a "pay for play" foundation were in the West Wing? My hunch is that it would not even be a news story.
Posted by Bruce Oksol at 7:47 AM No comments:


RBN Energy: how drag-reducing agents (DRAs) are changing the economics of pipeline takeaway capacity. This was in the news not too long ago; now an opportunity to learn more about the subject.

Scott Adams: my take on wiretapping, Trump, and Comey (I'm glad to see Scott Adams use the Oxford comma).
Posted by Bruce Oksol at 7:45 AM No comments: