Inflation: a key gauge of future inflation is easing. Link to The WSJ.

Might as well break it to the kids now. Christmas may look a bit austere this year. Hasbro—the maker of Monopoly, Nerf, and Dungeons & Dragons—announced that it is implementing price increases that will "go into effect fully for the fourth quarter" in order to maintain profit margins in the face of skyrocketing costs. This was music to the ears of investors, sending the stock up better than 12 percent Monday. But whatever tune those investors were singing, it certainly wasn't a Christmas carol — because the fourth quarter price hikes will come in what is known to the rest of us as the Christmas season.

We do not mean to cast aspersions on Hasbro or its investors. As the toy maker's CEO pointed out in an interview with CNBC, ocean freight is on average four times as expensive as it was a year ago. They aren't waging a war on Christmas here. It's just that inflation is here, and it does not look like it is going anywhere. Shoppers are likely going to find that things are a lot more expensive come Christmas time.

As Greenlight Capital's David Einhorn detailed in a letter to investors sent out Monday, much of the capital investment made over the past decade has gone into digital media, unprofitable tech companies, and companies that profess the woke capital catechism trinity of environmental/equity, social, and governance. That has left the kind of companies that make the things that are rising in price starved of investment and unable to expand production to meet demand. Investors in Tesla—up 113 percent over the past 12-months—are no doubt happy, but nothing Tesla does is going to resolve the shortage of cars and trucks that has sent used auto prices up 10.5 percent in June and more than 45 percent since last year.

"The point is, we believe we have reached a structural change in inflation," Einhorn wrote. "Part of that is driven by public policy, but part of it has been driven by capital markets and ESG mandates.The enormous emphasis on investing in often money-losing businesses in disruptive areas like technology has left traditional industries starved for growth capital. The result is they haven’t grown capacity and now they cannot meet demand. The more these ‘value' stocks are starved of capital, the higher prices are likely to go and the longer the inflation is likely to last."

All the talk about inflation being "transitory" may actually be making things worse. Higher prices would ordinarily lure investment. But with Fed officials and the Biden administration insisting that prices will not keep rising—recall that Biden recently claimed that his $4.1 trillion spending package would reduce inflation—investors are likely deterred, according to Einhorn. That would explain, for example, why new home sales remain surprisingly low despite record high prices. Who wants to invest in building new homes—or in a home builder—if the Fed is promising to crush the price gains? Ironically, that underinvestment will likely mean supply constraints remain in place and prices do keep rising.

Whether or not one agrees with Marlow & Carney, it's hard to blame Hasbro's price increases on President Biden.

US set to push global economy over recovery line: see The WSJ.

The U.S. economy likely returned to its late-2019 size during the three months through June, helping to lift global output above its pre-pandemic level for the first time.

Economists surveyed by The Wall Street Journal estimate that figures to be released Thursday will show that the U.S. gross domestic product rose at an 8.5% seasonally adjusted annual rate in the second quarter. That likely left U.S. GDP—the value of all goods and services produced across the economy, adjusted for seasonality and inflation—above the $19.2 trillion level reached in the final quarter of 2019, the last before the spread of Covid-19 pushed large parts of the global economy to shut down and contract, they say.

The combined economic output of the Group of 20 leading economies exceeded its pre-pandemic level in the first quarter,  according to estimates by the Organization for Economic Cooperation and Development. With the U.S. and a number of other large economies crossing that threshold in the second quarter, it is likely that global output is now higher than the level recorded in the final quarter before the coronavirus struck, the group says.

It will be interesting to see what Rick Santelli, CNBC, has to say if US GDP comes in at 8.5% for the 2Q21. I believe this will be the "first reading" as they say. If traveling, I may miss Santelli's comments.

One assumes the market has already "baked in" this 8.5% 2Q21 US GDP. Prediction: come Thursday, the Dow will go up, go down, remain unchanged.

Meanwhile, for the rest of the year, from Goldman Sachs:

Goldman Sachs trimmed its U.S. economic growth forecast for remainder of the year on Monday, citing a slower recovery in the services sector.

"We have long expected growth to peak in a mid-year boom fueled by vaccination and fiscal support," Jan Hatzius said on a note to clients. "But the subsequent deceleration now looks likely to be a bit sharper because the goods-to-services rotation is likely to be less seamless."

Weren't we trying to get to 6% under a previous administration? 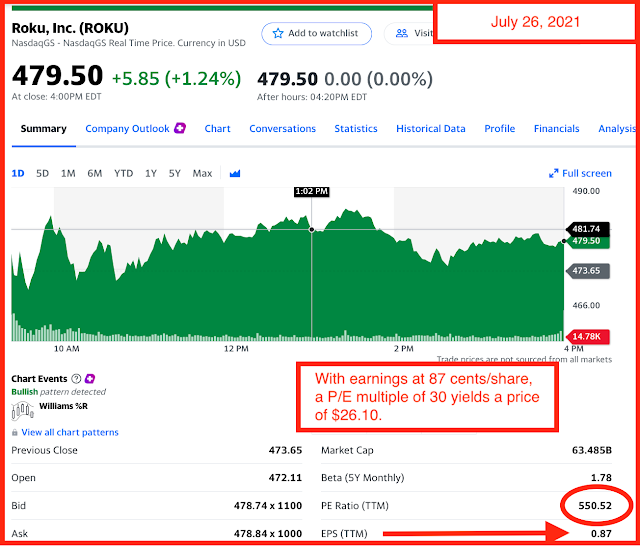 "They" say AAPL is expensive at 34x earnings. We will see tomorrow. If AAPL misses, shares will plummet. Think SAM from last week.

McKesson: increases quarterly dividend from 42 cents to 47 cents. Let's see, 5 / 42 = 12%. That seems a nice offset to "inflation." Again, the gap widens between the investor class and the non-investor class.

SCCO: this one is very, very interested; previously posted; increases quarterly dividend from 70  cents  to 90 cents.

US to end combat operations in Iraq by year-end. -- President Biden.

Posted by Bruce Oksol at 5:36 PM No comments:

NDIC scout tickets have not been updated.

Whiting; The other day it was reported that Whiting will be acquiring assets in the Sanish oil field. The seller was not identified which usually means the seller is not a publicly-traded company. My first thought, the seller might be Slawson, but I'm now leaning toward Kraken Oil & Gas, LLC.

NDIC: it appears the NDIC has quit updating scout tickets. The last scout ticket is for permit/file #38429. I believe we should be up to #38443 -- on Friday, July 23, 2021, the daily activity report, for example, posted six new Hess permits, none of which have been posted as scout tickets. Whatever.

As the outlook for crude oil in 2022 came into three-dimensional view this month, the market’s steadying mechanism managed to right itself again after another wobble.

The Organization of the Petroleum Exporting Countries took its first formal look at next year in its July Monthly Oil Market Report, becoming the third of three widely watched prognosticators to do so.

Among the other two, the International Energy Agency began projecting 2022 oil-market data in its June Oil Market Report, and the intrepid U.S. Energy Information Administration took its first analytical shot at next year way back in January in its Short Term Energy Outlook.

The important third dimension that OPEC gave to the 2022 oil-market picture arrived on July 15 after two weeks of worry about whether production restraint by most of the group’s members and cooperating countries would survive. On July 18, though, the internal squabble driving that concern ended in a compromise that will result in production quota increases for several OPEC+ members.

The 2022 projections by OPEC, IEA, and EIA, not to mention worry-driven elevation of crude oil prices prior to the compromise, make clear that the market needs OPEC+ to continue the orderly unwinding of its production cuts. In today’s blog, we compare the three forecasts and look at how the latest adjustment to OPEC+ supply management will affect the market.

Posted by Bruce Oksol at 8:32 AM No comments: