Update on a well that had a huge IP, but subsequent production was poor, and is now doing well:
There is nothing in the file report to explain the production profile; there were no neighboring wells fraced at the time production improved. 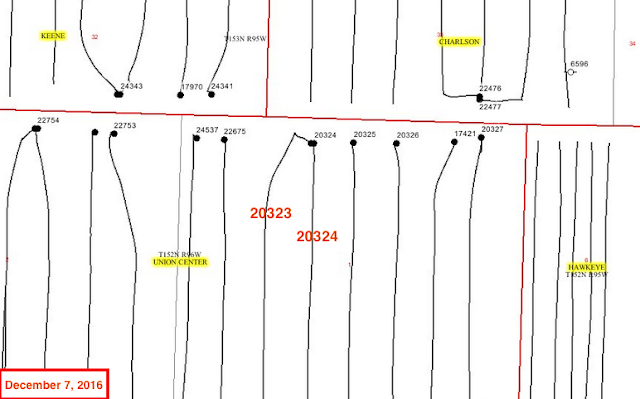 The scout ticket and production profile:


Editor's note: CNBC notes that today's record close for the Dow and the S&P 500 continues a rally that began after Election Day [otherwise known as the Trump rally]. The Dow, CNBC says, has posted gains in 18 of the past 22 sessions and 12 record closes since the election. The S&P and the Nasdaq, meanwhile, have risen 4.8 percent and 3.9 percent since November 8, 2016, respectively.

Later, 12:36 p.m. Central Time: government workers may get extended holiday -- President Obama likely to not sign "continuing resolution to fund the government." Will result in shutdown. That's fine. He will leave office on a high note and once government is shut down, end of routine regulations coming out of EPA.  Even those with eyes wide shut can now see the "real Obama." Nice Christmas present for government workers.

The Market: Market up almost 100 points. If it holds, it will be another record-setting day. I write Don:


One minute I'm biking and the next minute I'm elsewhere and in that time the market jumps from slightly negative to flat at the opening and now it's 143 186 204 points up. What gives?

No answer yet. It's been 30 seconds. I assume Don is doing some productive. I'm not.

Then I answer my own question, this "photo-headline" tells the entire story (Don alerted me to the headline story about seven hours ago; see my note posted at 5:41 a.m. this morning): 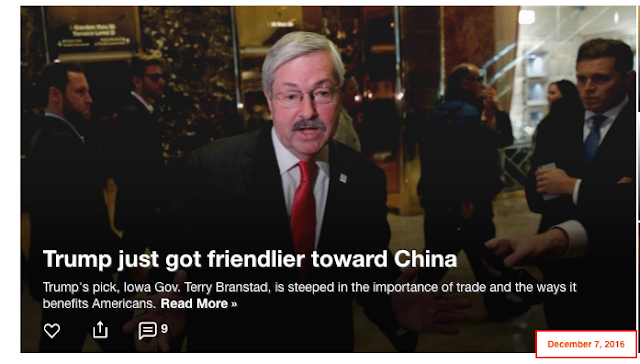 The forecast for fourth-quarter real nonresidential equipment investment growth has fallen from 6.6 percent to 3.9 percent since December 1.


I forgot when I first bought shares in Burlington Northern railroad (BSNF/BNI) but I remember distinctly the hour and the day I made the decision. That was decades ago. I was incredibly upset when Warren Buffett bought BNI. BNI paid a great dividend; BRK pays no dividend. During the Bakken boom BNSF did very, very well but during the Bakken bust and recession one wonders how it would have performed; I doubt that it would have doubled in value. BRK-B did (see graph below). I've suggested to my wife that she send Warren Buffett a Christmas card this year.

Rate of hiring declined at fastest pace since 2013 -- BLS report, today, December 7, 2016, hopefully not a day that will live in infamy.

I'm currently reading a book about computers: Rise of the Rocket Girls: The Women Who Propelled Us, from Missiles to the Moon to Mars, Nathalia Holt, c. 2016, already a bestseller. There's another book out there also but I'm blocking on the title, author -- a book my wife is reading, but not me. Now there's a third book on computers out this year. I saw it at the library yesterday and it is reviewed in today's Wall Street Journal: The Glass Universe: How the Ladies of the Harvard Observatory Took the Measure of the Stars, Dava Sobel, c. 2016. The link to the WSJ review is here.

I'm always struck by something that some literary critic pointed out a long time ago: the universality of a parent (usually a father) having to divide up his/her inheritance among three children (usually sons). The most famous, no doubt, was Shakespeare's (or rather Sir Henry Neville's) play, King Lear, in which a very old man must decide to which of his three daughters he would leave his kingdom. A real life story was that of Constantine the Great.

Constantine the Great left Constantinople (half-built) and his eastern provinces to his son Constantius. The latter's two brothers inherited the western and central provinces. Constantius continued the building of Constantinople that his father had started. See this link for more.

Now that the election is over, and hopefully the results will stand despite the shenanigans in Wisconsin, Michigan, and Pennsylvania, I am watching MSNBC "Morning Joe" again. And loving it. During the show this morning it was mentioned that Donald Trump, named "Man of the Year" by Time magazine would be interviewed on NBC's "Today Show." I would never in a million years watch "The Today Show" but with Trump's interview, I made the million-year exception.

Several times during the interview, Matt Lauer -- in fact, not several times, but it seemed to be a major focus -- Matt Lauer asked about Trump's "addiction" to tweeting and if Trump would be able to "break that addiction." Trump said that, in fact, he is quite restrained when it comes to tweeting. Matt Lauer's incessant questioning on the tweeting issue suggests to me that mainstream media is quite afraid of where this (Presidential tweeting) will go.

Journalists will now get their news from two sources: the Drudge Report and President Trump via Twitter. And they will get their analysis of presidential news from Rush Limbaugh.
Posted by Bruce Oksol at 8:51 AM No comments:

The Recount: Day five of the Wisconsin recount is complete and Trump has gained 84 votes, while millions of dollars and countless hours of time are being squandered.


Exxon Mobil has pulled out of half of the six exploration blocks it operated in the Kurdistan region, the Iraq Oil Report reported. The oil company has walked away from its operations in the Qara Hanjeer, Arbat East, and Betwata blocks.

And except for the DAPL, no wars are being fought in North Dakota.

Cold records being set across the US. Much earlier than ever before. This follows Blanche, and so far, this "storm" is not even named. Chicago breaks 1940 snowfall record and the "storm" will continue. Seattle could see half of its annual rainfall in one day. Temperature plunge in the US; 35 degrees below normal across the entire country.

There has been no evidence of global warming in past 14 years. Sea levels rising? Arctic ice melting? Stories all over the place.  See "Daily Trump Thought" -- December 7, 2016.

Related? SunPower to cut 2,500 jobs on top of previous cuts.  Aluminum-roofing company having challenges navigating turbulence in the renewable energy business.This is 25% of its workforce -- and this is one industry where robots can't take the place of real humans.


Takeaway capacity out of the Marcellus/Utica shale producing region is about to get another significant boost.

Tallgrass Energy’s Rockies Express Pipeline (REX) expects to bring the first 200 MMcf/d of its 800-MMcf/d Zone 3 Capacity Enhancement project (Z3CE) in service any day now, and ramp up to the full 800 MMcf/d by end of the year (only 20-some days from now).

Moreover, the pipeline operator has hinted that it may be able to eke out incremental Zone 3 operating capacity over and above the new design capacity in the near future. The Z3CE expansion will mark the third time in as many years that REX will increase westbound takeaway capacity out of the Marcellus/Utica region.

With each capacity boost, Northeast production volumes have risen to the occasion and the capacity has filled up. Today we examine this latest expansion and what it will mean for U.S. gas production.

Saudi Arabia's IPO: from Reuters/Bloomberg/Rigzone. This is a pretty good article. It provides another reason why Saudi Arabia was interested in getting an "OPEC" deal to cut/freeze production. Was it all about a successful IPO?

Now that President Obama is on his way out, it is amazing to listen to MSNBC "Morning Joe." Today, there is pretty much general agreement that President Obama's Iran deal was a complete disaster. Add that to the long list, starting with Solyndra and ObamaCare.

AMD soars among rumored deal. It will be interesting to see what XLNX does today; it was up a bit yesterday and hitting new 52-week highs.

Having said that -- not having Apple TV -- we do have TWC TV which is quite incredible. We do have two big-screen televisions in this small two-bedroom apartment, but what we really like is the fact we can watch television on all mobiles devices in the house: laptops, tablets, and, I assume, smartphones.

Then, add a wireless Bluetooth speaker like Beats Pill or UE Boom. Apple owns Beats but talking to Apple employees a year or so ago, they felt the UE Boom was the better choice. And slightly less cost. If I had all the money in the world I would "hang" a 13" (12.9-inch) iPad Pro in each room in the house, starting with the kitchen.

The cover of Time magazine in which Trump is pictured as "Man of the Year," the only subtext: President of the Divided States of America. It was noted by Mr Trump on "The Today Show" that he was not the one that divided the state of America. President Obama has been president for the past eight years; President Obama is still president; and, Trump doesn't take the oath of office until January 20, 2016.

Posted by Bruce Oksol at 5:14 AM No comments: